Poutine, bikes and beach- yes they go together 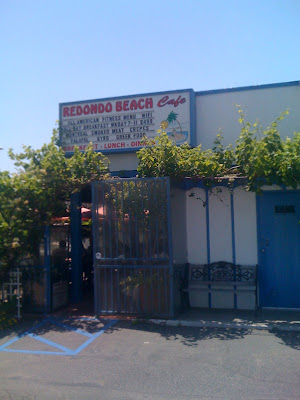 I'm a planner. I like to be prepared. I like to "train" for activities. I surfed everyday for weeks before my Costa Rica trip last year. I hiked every weekend before our Yosemite trip a couple months ago. I do a lot of squats before the start of every snowboarding season. So you would think I would be better prepared for our bike ride from Venice to the South Bay. Unfortunately, I hadn't gotten on a bike since my last ride to Temescal that ended with a lovely brunch at Bin 73. I was a bit nervous of our bike ride to the South Bay because I am deathly afraid of bicycles. But nothing that home cooked french toast and mimosas in the morning couldn't fix.

After breakfast, we rented bikes and made our way south. Here's another tidbit about me. I'm also very goal oriented. I need an end point, something to attain to. Something like a bar in the South Bay with mimosas waiting for me. We decided to bike to Redondo Beach Cafe. It's kind of a hodgepodge of things- it's a bit of a Canadian bar (with the Canadian Flag hung proudly on the wall) but it's also known for its Greek food, and their menu is also reminiscent of an American diner. 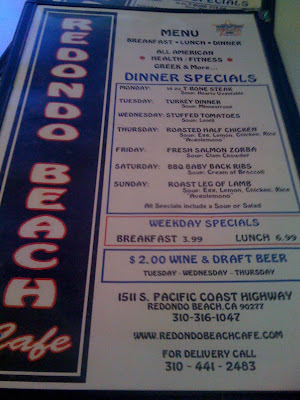 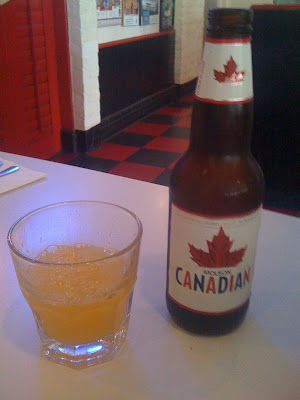 Mimosas and ice cold Molson. The mimosa was more OJ than bubbly. Guess that's what you get for $4.29. Their beers were $3.99 which included Blue Moon, Guinness and Heineken. 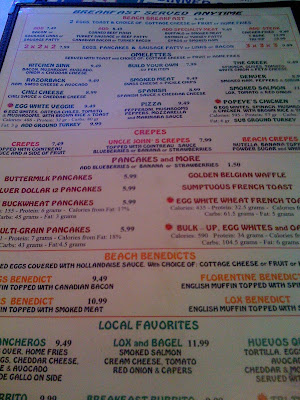 Their menu is extensive and they serve breakfast all day. There are a handful of healthy dishes which they have flagged and for which they list out the nutritional count. I like that they offered healthy options because often times, you really want to know what you're consuming. 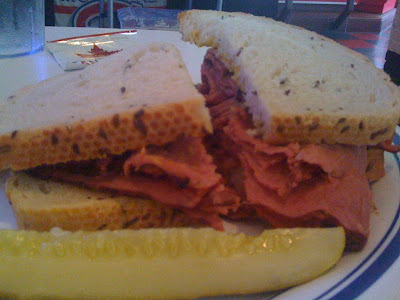 Montreal smoked meat
Aged beef brisket on rye with mustard. Apparently this is a classic Montreal dish. For the growing boys out there, you can also order double meat. Looked just like a pastrami sandwich to me, although with a smokier flavor. 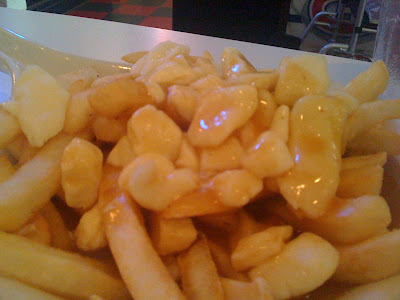 The sandwich came with a side of poutine. Our table was littered with bowls of poutine because my other friend ordered the poutine as his meal, and the owner generously brought out another order for free. I love Canadians. Poutine is french fries topped with cheese curds and gravy. We ordered the traditional Montreal version but they also offered Italian poutine (topped with meat sauce) and another one topped with smoked meat. This photo doesn't do the poutine justice because it didn't capture the additional gravy that we poured over the fries. The fries were also pretty darn good. They were crisp on the outside and fluffy on the inside. 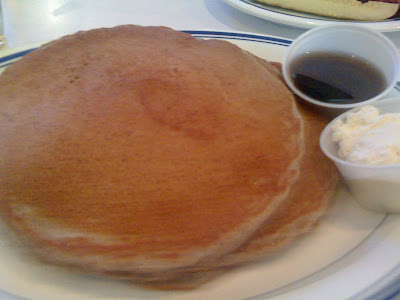 Buckwheat pancakes.
This was listed as one of the healthy items with only 155 calories. I doubt that included the butter and maple syrup. There were 3 pancakes which was more than enough food. It didn't taste bland or dry so you would never know that you were ordering something healthy. I like that - when a restaurant can prepare something healthy but still tastes like something you would normally order. 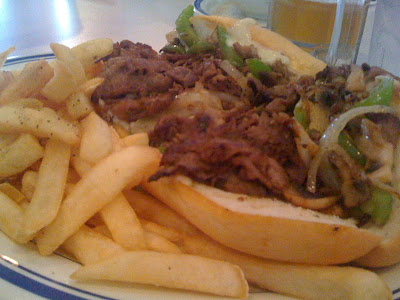 Philly cheesesteak sandwich with grilled sliced beef, peppers, onions, mushrooms, mozzarella cheese served on a french roll.
The thin slices of beef was nothing special, they were a bit dry, Thankfully the sandwich came with a side of jus which made it all better. 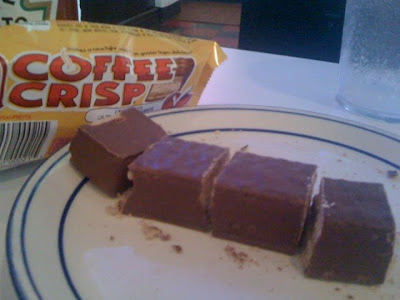 One of your friends in our party is Canadian so the owner brought by Canadian chocolate for us to share. I love chilled chocolate.

Service was good, our waitress came by right away when she saw my mimosa was running low. Plus, we got free poutine and chocolate :) The prices were also very affordable. This is a great place to grab a bite and watch the game as they had flat screen TVs with the football game on.

After refueling, we made our way back to the Westside. I think I can confidently say that I'm no longer petrified of bikes. Yes I am still a bit wobbly but I think I kicked ass on it and zipped back in just over an hour. In fact, I'm already thinking of my new bike purchase with a cute little basket and perhaps a bell. Maybe on a bike, I'll be more inclined to venture out of the Westside and visit the South Bay on a regular basis, where poutine and mimosas await.

Ahhh I've forgotten about this place! One of my old professors (a Greek who played in the NFL) quit and joined his brother at this place! I've been meaning to go and good to know they have poutine there too. Bravo on your bike ride. I should bike their too if I'm gonna eat poutine.

Anna - Soleil in Westwood has poutine specials now (think bolognese, foie!!), i think i have to scope it out