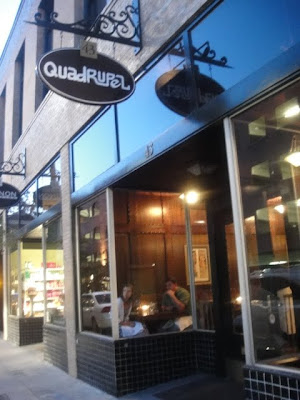 It'll take a lot to get me to Pasadena on the weekends. Even though it's only about 20 miles from the Westside, it took us almost an hour with traffic on a Saturday evening. But sometimes, you have to make exceptions for your friends. And so we made the trek out to Pasadena this weekend for our friends' housewarming party. Since we are never in the area, we took the opportunity to check out the dining scene. Our friends live right smack in Old Town Pasadena, a cute area that houses a bunch of restaurants, bars and boutiques, all within walking distance. I liked that we were able to conveniently park at any one of the large structures ($6 flat rate) and were faced with many dining options. We decided to check out Quadrupel Brasserie after checking out their menu. The restaurant is a Belgian pub meets French Brasserie, so basically I had all I wanted in one spot: French bistro fare and a wide selection of drinks. 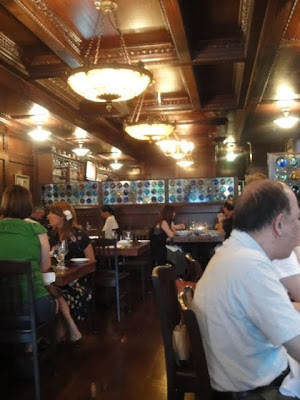 Walking in, we immediately fell in love with the decor. Wall to ceiling dark mahogany wood, antique light fixtures and stained glass partitions. We were a bit envious that Pasadena had just a quaint European bar such as this. 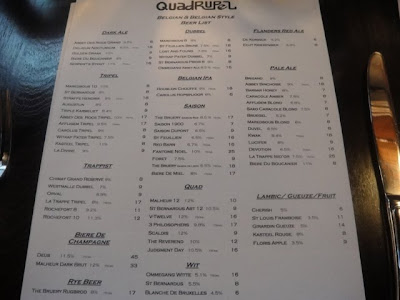 Quadrupel boasts a wide selection of Belgian beers (over 70 beers on bottle), however I wished that they offered more beers on draft. 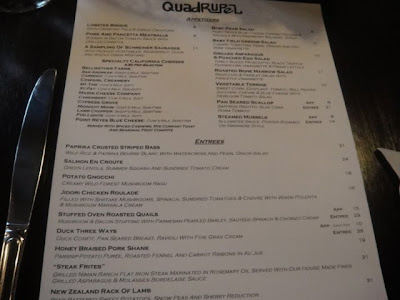 Their food menu is French bistro fare, offering a fancy spin on the classic french dishes. Chicken is served as a roulade and the restaurant uses Jidori, and asparagus salad is served with black truffle and pepper vinaigrette. The prices were reasonable for an upscale menu. I liked that appetizer portions are offered for some dishes. 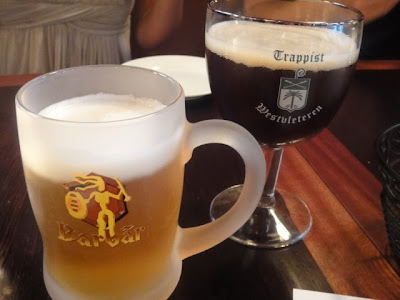 Westmalle Dubbel (Tripel) and Barbar Honey (Pale Ale). I appreciate that the beers were served in the appropriate glassware, even the more obscure beers that I have never heard of. However most of their beers are in bottle, not on tap. 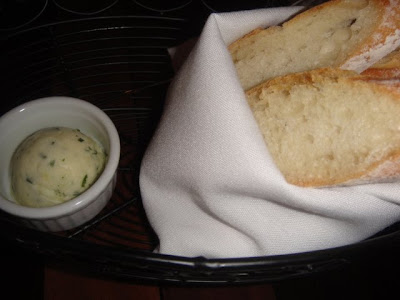 Bread with chive butter. I liked the butter but the bread was ordinary and wasn't warm. 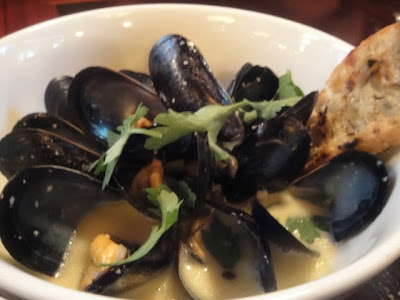 Steamed mussels in a choice of lobster sauce, porter steamed or mariniere sauce. Appetizer portion for $8 or entree at $14
We opted for the appetizer portion which I thought was a good size for $8. The mussels were cooked well but I thought this dish wasn't anything special. It didn't stand apart from what you would get at another restaurant. Perhaps if we tried a non traditional sauce such as lobster, we might have been blown away. 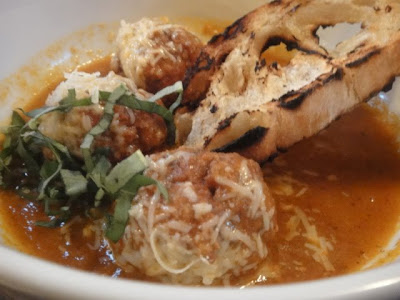 Pork and pancetta meatballs stewed in bacon tomato sauce with grilled ciabatta
We all agreed that the meatballs were dry and dense, but the sauce was delicious. It was thick and slightly sweet, and was the perfect dipping sauce for the ciabatta. 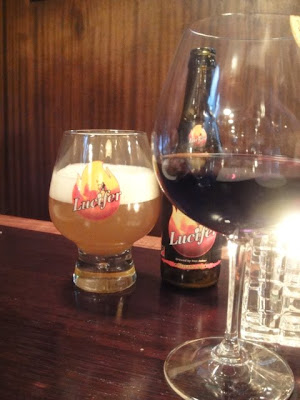 Another round of drinks including Lucifer (Pale Ale) and a glass of Bourgogne Pinot Noir that would pair well with the duck. 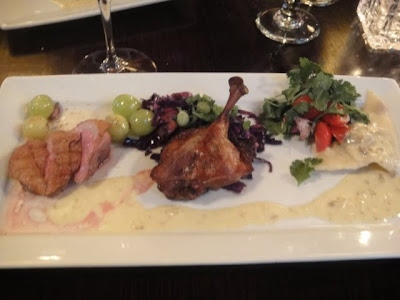 Duck Three Ways with duck confit, pan seared duck breast and ravioli with foie gras cream.
Entree was $16 or you could order each item for $10 each. I liked this option because my friend and I didn't necessarily want all three pieces each. We both wanted the confit so we ended up sharing the duck three ways and adding an additional order of confit for $10.
The duck confit had a crispy skin but I thought the meat could have been more tender. The duck in the ravioli was shredded and was not juicy enough. I wished that it had been more tender or cooked with a bit more cream or butter. Also, I could not taste the foie in the sauce. Such a pity. Lastly, although the duck breast was a nice pink medium rare, it should have been cooked a little more to render the fat. 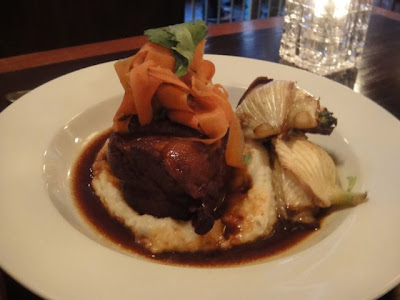 Honey braised Pork Shank with parsnip potato puree, roasted fennel and carrot ribbons in au jus I really enjoyed the pork shank which fell off the bone. There was also fatty marrow in bone. The pork was cooked in a sweet honey sauce which I enjoyed, however the fennel overwhelmed the flavors of the meat. It was actually such a strong taste that we felt ruined the dish.

Quadrupel is the kind of place that you want to succeed. The beer selections were great, the ambiance was good, the service was knowledgeable and friendly, however there's still room for improvement on the food front. There were standout points in each dish but there were also downfalls in those same dishes. Although the duck dish was decent and exciting in theory, execution fell short in a few areas. The duck breast should have been cooked a bit longer and the duck confit a little less. The fennel in the pork shank was too overwhelming, yet the pork itself was perfectly cooked. The meatballs were dry but the sauce was flavorful. Quadrupel definitely has a lot of potential, in fact I love the concept, the decor and the service. It has everything going for it but IMO, I think it just needs a little more care in the kitchen.

Ah, you're in my hood! I guess that's a reason I don't eat around Pasadena b/c there are a lot of disappointing restaurants...it's sad.

sounds just like our time there. we both ordered fish and were underwhelmed. i thought maybe just their seafood needed some work and was willing to give it another try and order something more meaty, but with your review, i'm not sure there is a need. such a shame, we were so excited for this place to open.

Such a shame when duck isn't cooked right. And when the butter is better than the bread. Travesty!

Kung Food Panda- I know, right? the one time I actually make the trek.. and it wasn't up to expectations.

catchacubinitsden- I was excited to. I am still hopeful though because I really do like the place and the menu. I mean, it wasn't all bad.. but it could have been better.

Diana - the concept of the trio of duck was great, just wish they executed on it. The bread was so-so but it did make a great dipping tool for the meatball sauce :)