My dear friend LB loves trying new recipes. She's the best cook in our group and we are always ecstatic when she plans a dinner party. We've had a Spanish dinner from the recipes of Jose Andres and another dinner based around Singaporean food. It always turns out to be an ambitious menu that requires multiple dishes and many ingredients. The theme of this recent dinner was duck. The idea was conceived when she had some duck bones leftover from a previous Peking duck dinner that would go towards making a duck stock. Interesting how left-over bones can inspired a multiple course dinner. Most of the nights recipe were from Jean-Georges Vongerichten's cookbook with some recipes for side dishes from other notable chefs.

Foie gras is a perfect starter for the duck entree. You could either get foie gras in the form of a terrine and eat it with crostinis or toasts, or you could prepare seared foie gras. Of course LB would choose the more challenging option. 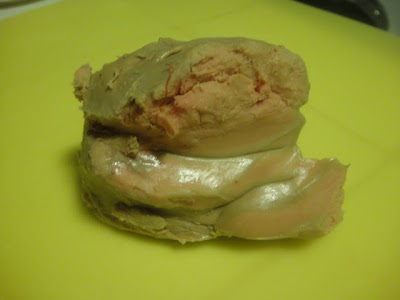 She ran around town trying to find whole foie gras (apparently Whole Foods in Westwood no longer carries it) and finally was successful at Petrossian. BTW, you HAVE to buy the whole lobe of foie gras, no less. This will set you back over $100 so don't try this recipe unless you really love your friends. 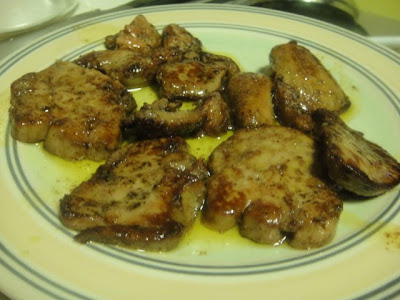 Seared foie gras. As you can tell, there's lots of oil from both the clarified butter that the foie was cooked in, and the foie itself. Don't forget your cholesterol tablet please. 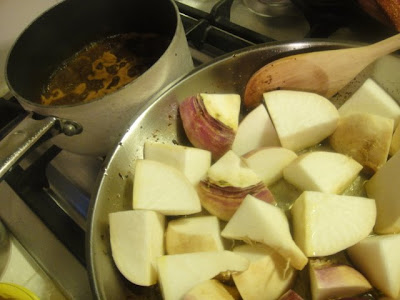 Cooking turnips. It took longer than the recipe suggested but it could be because our turnips were pretty big chunks and took a while to soften. 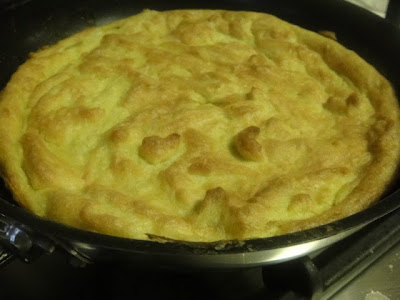 Millet cake. LB looked up recommended side dishes that went well with duck and came across the millet cake. Once again, she ran across town trying to find millet. They didn't sell it at Surfas (shocking, right?) but it's available at Whole Foods or Trader Joes. 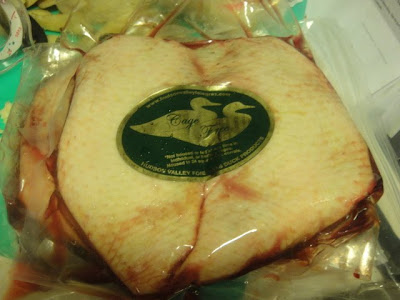 These duck breasts are like the most gigantic ones I've seen in my life. 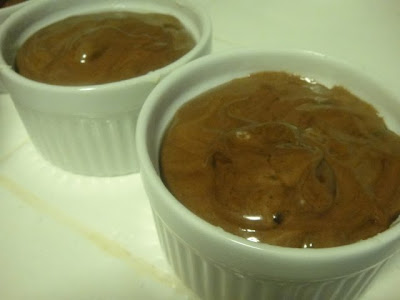 Molten Chocolate cake, right before it was popped into the oven. You knew it was going to be a strong finish to the meal.

Shortly after, our night began. 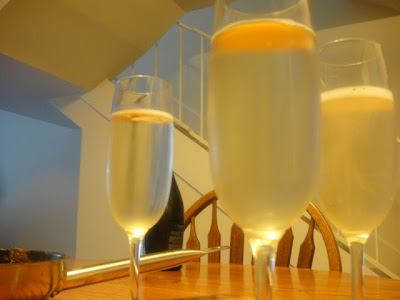 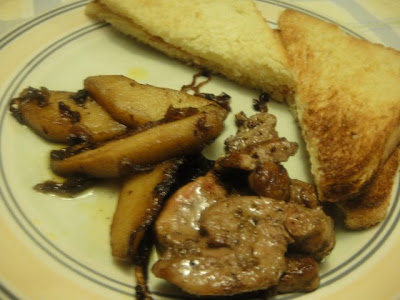 Foie gras with apples and brioche, served with fig preserve. The foie gras was melt-in-your-mouth, rich and had an amazing butter taste. It even converted my friends who were non-foie-eaters. This dish was restaurant quality but yet simple to prepare. I also loved the brioche bread which added more butteriness to the dish. 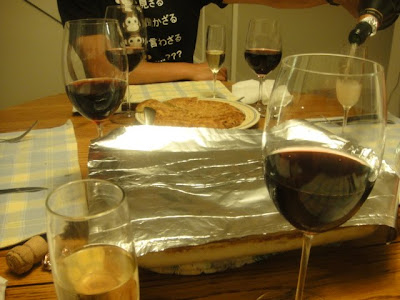 We paired the duck entree with a nice, smooth Pinot Noir. 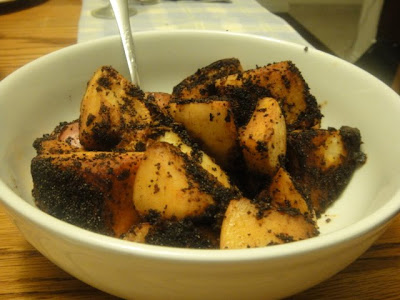 Roasted turnips with poppy seeds. The turnips tasted sweet but had a tang from the vinegar. The poppy seeds, I thought were unnecessary. Plus it looked charred and kind of scary. 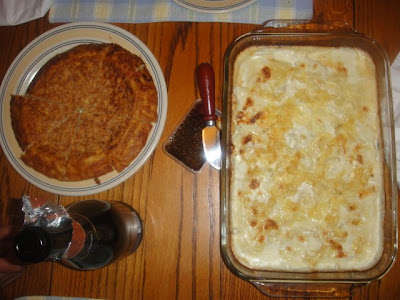 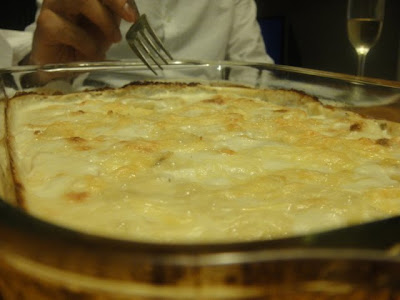 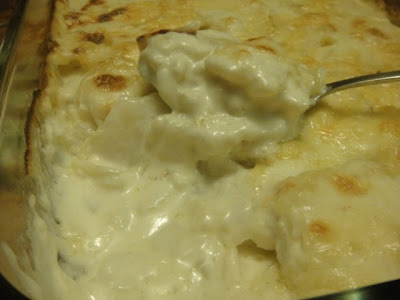 The potatoes were delicious. Yes very rich, she even excluded the cream from the recipe but it was still heavy. 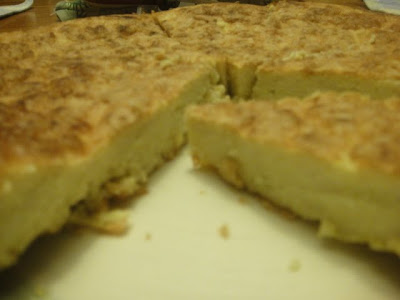 Millet cake was also very good-Millet is a type of grain. This dish reminded me of a Spanish tortilla and was a little airy inside. 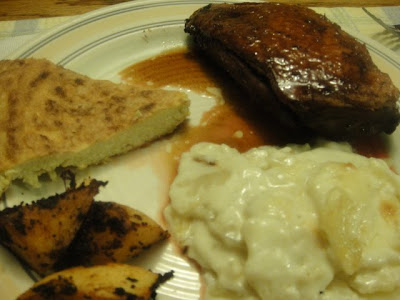 Even after the duck was cooked, it was still a very large piece. 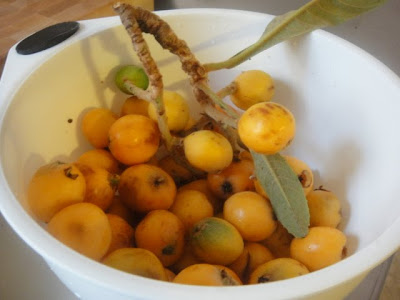 Some kumquat from my friends parent's trees. I thought this is a pretty good palate cleanser. 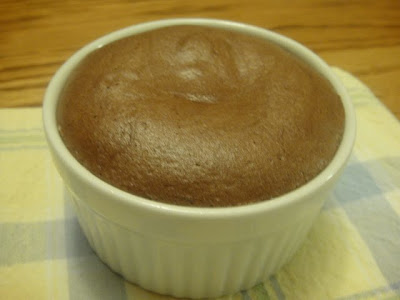 Molten chocolate cake. It looked so perfect on the outside that it hurt a little when I had to poke the center. 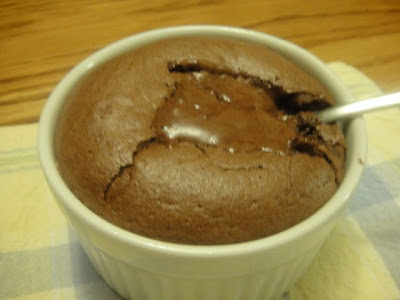 The center oozed of warm, rich chocolate. It was soft and airy inside just like a souffle. I liked that the dessert wasn't too sweet because the recipe called for bittersweet chocolate.

Another fantastic dinner and something that had the quality of what you would get from a restaurant, yet felt like home-cooking. French recipes can be intimidating (both in preparation and ingredients) but they are so worth the time if you are looking for a more elegant dinner. My favorite was the seared foie gras which was amazing that we had to cook up another batch to serve with mimosas for brunch the next morning :)

Lightly season both sides of the sliced foie gras with salt and pepper.

Heat the clarified butter in a large non-stick skillet over moderately high heat, but not smoking. Sear the foie gras in batches, about 45 seconds per side. Remove from the pan and cover to keep warm.

To the fat remaining in the pan, add the shallots, apples, and nutmeg, and cook, stirring, until caramelized and tender, about 7 minutes. Remove the pan from the heat and add the Armagnac. Return to the heat and cook until the brandy is nearly all evaporated, about 2 minutes.

Divide the foie gras and apples among plates and garnish with the toasted brioche. Serve immediately.

Duck ala JoJo
by Jean-Georges Vongerichten, Cooking at Home with a Four-Star Chef

Preheat oven to 500 degrees. Place a heavy ovenproof over high heat for a minute, then add 2 tablespoons oil and the bones. Transfer immediately to the oven. Brown the bones, turning the pieces occasionally, until very brown and crisp, about 30 minutes.

Meanwhile, toast the cinnamon stick, coriander seeds, and mace pieces (do not toast ground mace) in a dry skillet over medium heat, shaking the pan occasionally for about a minute, or until it becomes aromatic. Add the ground ginger and if you are using it, the ground mace. Remove from the heat and let cool. Break up the cinnamon stick, then grind the spices to a powder in a coffee grinder or mortar and pestle.

When the bones are well browned, add the onion, celery, and carrot to them and stir. Sprinkle the 1 tablespoon of the spice mixture and return to the oven until the vegetables begin to brown, about 5 minutes.

Place the bone and vegetable mixture in a sieve and drain out and discard the fat. Return the bone mixture to the skillet and add the maple syrup and honey. Return the skillet to the oven for 7 to 8 minutes, until the vegetables are nicely browned. Everything will be sticking to the pan, but don't worry about it. Do not turn off the oven.

Add the sherry vinegar, orange juice and lemon juice to the skillet and stir. Then add the stock and/or water; it should be just enough to almost cover the bones. Cook over medium-high; the mixture should be bubbling, but not furiously. As it cooks, the liquid will darken and thicken slightly as a result of the spices.

Simmer for 30 to 40 minutes, or until reduced by a little more than half; you want to end up with about a cup of liquid. Strain.

Season the duck breast with salt and more of the spice mixture, about 1/4 teaspoon per side of each breast; press the spices into the skin a bit.

Place the remaining 1 teaspoon oil in a large, heavy ovenproof skillet and turn the heat to medium-high. Add the duck, skin side down. After 1 minute, when it begins to brown, place it in the still-hot oven. Cook until the skin is very brown and the duck is firm, 7 to 10 minutes. Remove the skillet from the oven, turn the duck over and place the skillet on a burner over high heat for just a minute or two, until the duck is cooked to medium rare.

When the duck is ready, let it rest while you finish the sauce. Add the salt and pepper to the broth, along with the butter and lime juice. Taste and correct the seasoning. Slice the duck and serve it with a bit of the sauce spooned over. Garnish with a tiny sprinkling of the spice mixture.


Scalloped Potatoes Baked in Cream
by Julia Child, The Way To Cook

Pour 1 1/2 cups each of heavy and half-and-half cream into saucepan. Stir in the garlic, 1/2 teaspoon of salt, several grinds of pepper and the bay leaf. Slice the potatoes evenly 1/8 inch thick, dropping them as sliced into the cream. When they are all in, add more cream if necessary, to cover the potatoes by 1/2 inch.

When tender, correct seasoning and turn them into the buttered baking and serving dish; spread on the grated cheese.

About 20 minutes before serving, set in the upper middle level of the preheated oven and bake until bubbling hot and lightly browned on top; do not overcook or the potatoes will be dry rather than lush and creamy.

Season turnips with salt and pepper. In a large ovenproof saute pan, heat butter until starting to brown. Add turnips and toss to coat well. Add poppy seeds and saute until light golden brown, about 8 to 9 minutes. Add paprika and toss to coat. Add vinegar and cook until evaporated, 4 to 5 minutes, remove from heat and serve


Millet Cake
by Jean-Georges Vongerichten, Cooking at Home with a Four-Star Chef

Preheat the oven to 500 degrees. Combine the millet, 2 cups water, and a pinch of salt in a saucepan, cover, and place over medium-high heat for about 20 minutes, or until the water is absorbed. Turn off the heat and let sit, covered, for 10 more minutes.

Stir in the butter, whole eggs, yolk, milk, and salt and pepper to taste.

Place an 8- or 10-inch ovenproof skillet, preferably nonstick, over high heat; a minutes later, add the oil. When the oil smokes, pour in the batter and cook for about 3 minutes, or until the edges firm up a bit and bubbles appear in the middle. Transfer the skillet to the oven and bake until firm on top, about 10 minutes. To serve, invert onto a plate so the crisp side is up.

In the top of a double boiler set over simmering water, heat the butter and chocolate together until the chocolate is almost completely melted. While that's heating, beat together the eggs, yolk, and sugar with a whisk or electric beater until light and thick.

Beat together the melted chocolate and butter; it should be quite warm. Pour in the egg mixture, then quickly beat in the flour, just until combined.

Butter and lightly flour four 4-ounce molds, custard cups or ramekins. Tap out the excess flour, then butter and flour them again. Divide the batter among the molds.

Preheat the oven the 450 degrees. Bake the molds on the tray for 6 to 7 minutes; the center will still be quite soft, but the sides will be set.

Invert each mold onto a plate and let sit for about 10 seconds. Unmold by lifting up one corner of the mold; the cake will fall out onto the plate. Serve immediately.

oh wow, what a dinner!! wish i had friends like that :) more specifically, i wish i have friends that can cook.

Bagnatic - hahah, those are friend you want to KEEP!

Your friend sounds like a champion! Kudos to her for cookin' and to you for eatin'!

Gastronomer - she's is! She's already talking about the next cooking event.. boy am i lucky :-)

Very interested in making this millet cake! Thanks for sharing the recipe.

Hi Anna - Hope the millet cake works out for you! You've have to cook up some duck to go with it :)