If you know what E3 is, you probably own three games consoles and play Red Dead Redemption into the wee hours of the night. If you don't know, don't worry- here's a quick download. E3 is the annual Electronic Entertainment Expo that is held at the LA Convention Center (they downsized it and moved it to SaMo a few years back but headed back for the larger scale event in the past years). It's a big industry event (over 45K attendees this year) that isn't open to the public, and it's the one time of the year when I get all my video game playing in. This year's event showcased new 3D hardware and software (the glasses are still pretty lame though), motion sensor systems Microsoft's Kinect and the Sony Move, and loads of new games (Zelda, Killzone 3, Dead Space 2, Epic Mickey). OK, but this blog is about food and drinks, not geeking out so I won't be posting photos from the conference. So on to the more important thing.. happy hour!

We went in search for a happy hour spot post-conference. I was actually pretty excited because I normally can't make it in time to Downtown LA for happy hour. I wanted to hit up Magnolia or the Library Bar but unfortunately it would require walking a couple blocks, and usually you don't want to do that even if you are being escorted by a gentleman. We finally decided on Yard House at L.A. Live. I wasn't loving the idea of Yard House because it's a chain restaurant, but it was just a hop away. It was really packed inside. Who knew gamers were big drinkers. 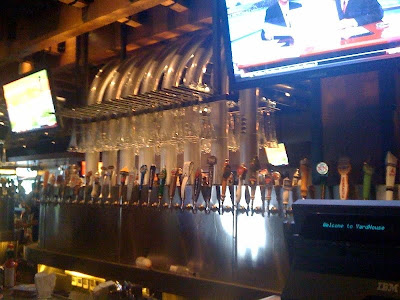 The best thing about Yard House is that they have over 100 beers on tap. 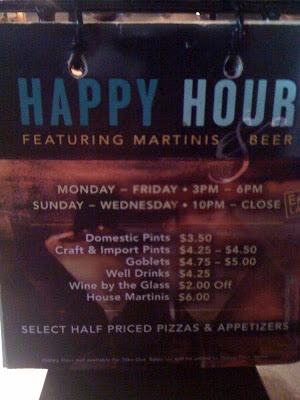 They have a pretty good happy hour from 3-6pm. 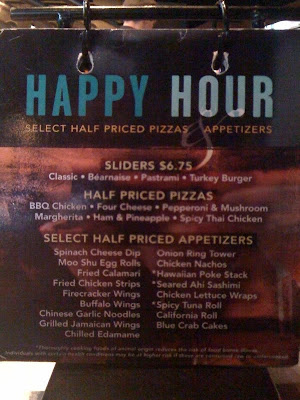 Their happy hour food menu (1/2 off apps and pizzas) had a nice selection of bar grub. 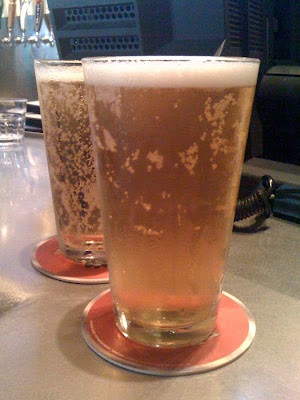 For beers, we went for a Spaten and the Lost Coast Great White. I was pretty parched by the time I got there so I downed my Lost Coast in a few minutes. Mmmmm refreshing. 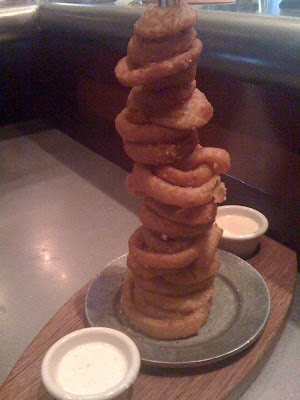 Onion Ring Tower with ranch and chipotle sauce
The rings were beer battered of course. I liked that they weren't enormous which allowed me to eat them somewhat ladylike. I really enjoyed the onion rings until I got home and googled the calories in this dish. OMG 1,685 calories. That's 843 calories each between the two of us and I know that I definitely snatched up more than my share. It's didn't even seem that large. How deceptive. No wonder the obesity rate of U.S adults is at 34%. 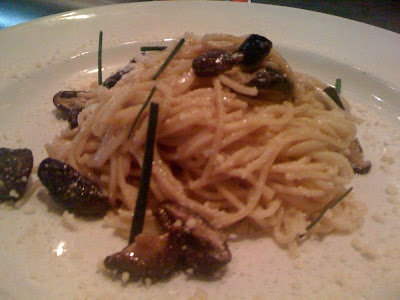 Garlic Noodles with garlic, butter and shitake
The calories were more tolerable at 812, but still insane. If I had known the difference in calories, I think I would have ordered two of these instead of the onion rings because the noodles were really good. I love the simplicity of garlic, butter and earthy shitake.

Yard House ain't the "coolest" spot in town but it's fun post-conference or before a sporting event at the Staples Center. Their beer selection is impressive and so is their food menu. Next time, just look up the nutrition values of dishes before you order. Trust me, you'll regret it if you don't...

count me as one of the 45K! we planned to go to Yard House as well, but then spotted Farm of Beverly Hills.

the yard house does it's job. i like their garlic noodles too...but yeah, that onion ring tower...CRAZY.

catchacubinitsden - oooo Farm of BH would have been healthier, i think :)

bagnatic - i guess the garlic noodles rock because of all that BUTTER....