When we asked Michael Tusk of Quince Restaurant for some restaurant suggestions, he told us we absolutely had to get a reservation for Commis Restaurant in Oakland. Trust me, if the chef/owner of a Michelin Star restaurant recommends a dining spot, you gotta take heed. Oakland ain't that far, people. It took us about 15 minutes by car from SF. The restaurant is located on Piedmont Street which is an adorable street with lots of restaurants. Commis is probably the most understated building on the street, situated right beside the more spacious Baywolf Restaurant. We missed it even after walking by because they don't have a signage. 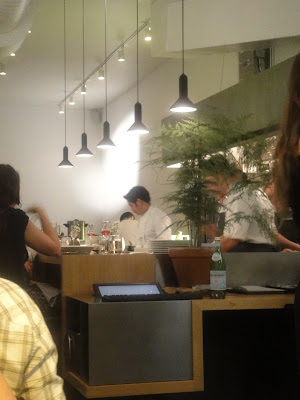 The decor is minimalistic with an industrial feel to it with metal structures, stark white walls and simple hanging lights. It reminds me of a modern Japanese restaurant. They have an open kitchen in the center of the restaurant as well a kitchen at the back. I was so surprised that we managed to get reservations the night before (although for 9.45pm) because it's a tiny restaurant with only about 30 seats. Commis means "an apprentice chef position". Chef James Syhabout has worked at famed El Bulli in Spain, the Fat Duck in England and Manresa in Los Gatos. Commis itself has earned kudos and its very own Michelin Star this year. 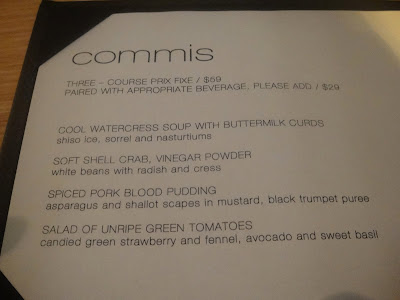 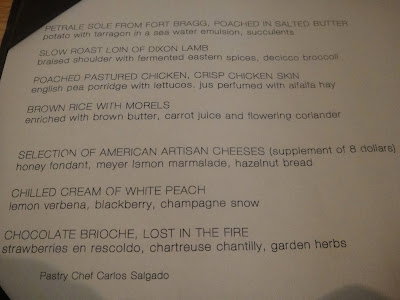 Just like the decor, the menu is very simple. They offer a three course prix fixe for $59 with optional wine pairing for an additional $29. The wine pairing is such an amazing deal but since we had a late reservation, we didn't want to overdo it on the drinking front. The cuisine is Californian-American and the restaurant sources seasonal, fresh ingredients from local farms. You would typically order a starter, an entree and a dessert but I thought two desserts between two people was a bit unnecessary so I asked if I could supplement a dessert with another starter. The kitchen was very accommodating. 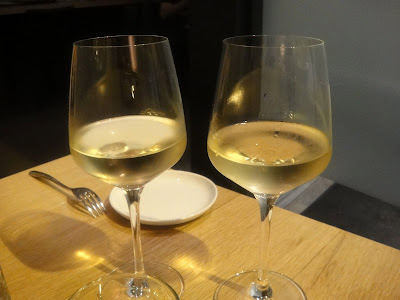 The wines were reasonably priced and our waiter made a good Viognier suggestion. 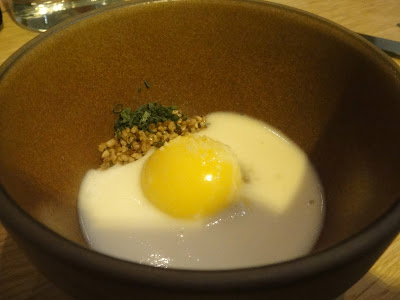 Amuse bouche of soft poached egg with onion puree and steel cut oats
Such a flavorful dish and a great way to start off the meal, The egg was semi-boiled and wasn't runny so when you cut into it, it wasn't too drippy and held it's shape. I liked the use of the onion puree which had a strong, salty flavor. I also enjoyed the finish of the wheaty oats which added a crunchy texture to the smooth puree. Everything worked well together and left me wanting more. 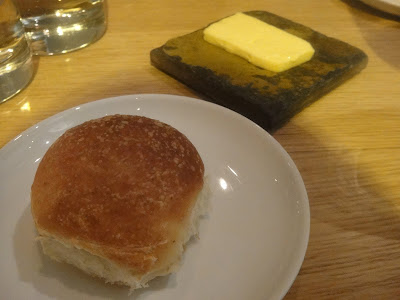 Bread which were freshly made parkerhouse rolls was served. They tasted like Hawaiian rolls. 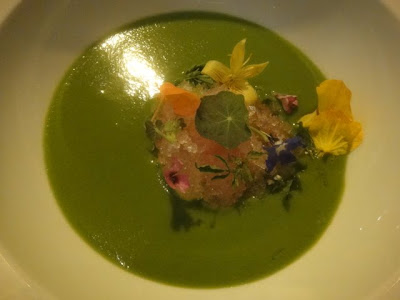 Cool watercress soup with buttermilk curds, shiso ice, sorrels and nasturtiums
I thought it was interesting because the soup was served pretty cold from the sorel ice. It was a bit too cold for me. I like my soups warm. The buttermilk curds were semi-soft clumps in the midst of the silky soup. My friend who ordered this really enjoyed it. 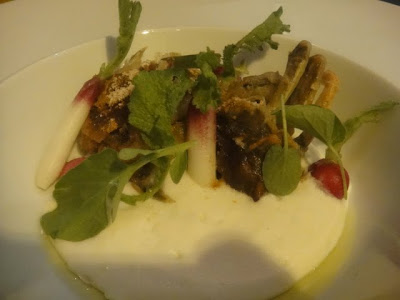 Soft shell crab, vinegar powder, white beans with radish and cress
This was an excellent dish from the creamy puree to the salty crunchy soft shell crab. The radishes were crispy and not too bitter. 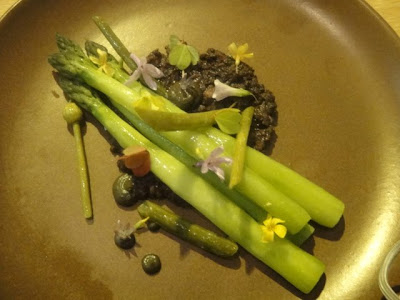 Spiced pork blood pudding with asparagus and shallot scrapes in mustard, black trumpet puree
The green colors were so vibrant and the asparagus were fresh. You could tell that there is an attention to detail in the plating with the pretty delicate flowers sprinkled on the dish. The pork sausage had that distinct offal flavor and the meat was crumbled instead of in a sausage casing. I really enjoyed the flavors. The saltiness really played well with the mild and slightly sweet asparagus. 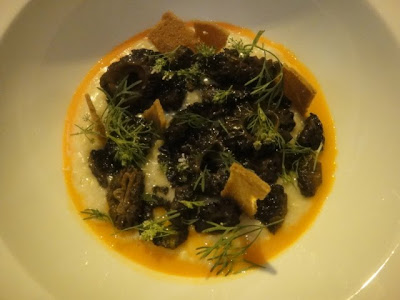 Brown rice with morels, enriched with brown butter, carrot juice and flowering coriander
When you read this on the menu, you automatically assume that this was the obligatory vegetarian dish for the poor vegetarians who are usually subjected to boring, tasteless meals. I am so glad we weren't turned off by the lack of meat because this was absolutely mouth watering. The rice had a creamy texture like a cross between a risotto and polenta. Every bite was luxuriously paired with earthy morels which were so meaty that you didn't miss the presence of meat. The carrot and butter emulsion was rich and salty. The rice was topped with crunchy Irish soda toasted bread. 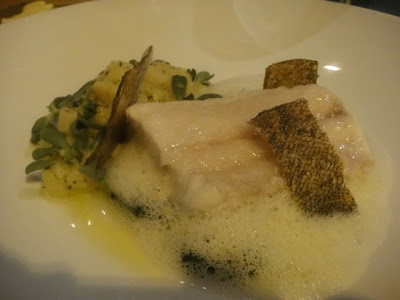 Ling cod from Fort Bragg, poached in salted butter, potato tarragon in a sea water emulsion, succulents
The menu listed Petrale sole but since their menu focuses on the best and freshest ingredients of the day, the chef selected a linq cod instead. The linq cod was perfectly cooked and was tender and crumbly. The soft meat was topped with deep fried crispy fish skin that added an intense saltiness to the mild cod. The fish sat on a bed of mashed yukon gold potatoes and sauteed spinach. Even though the lamb loin on the menu was calling my name, I'm glad I opted for this lighter dish. 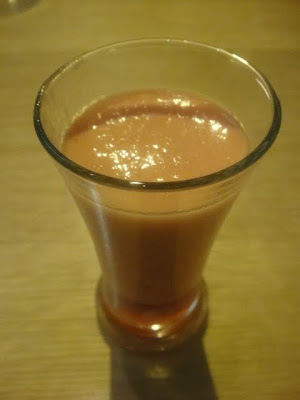 We were served a palate cleanser of raspberry and soda. Kind of like a smoothie-icee. 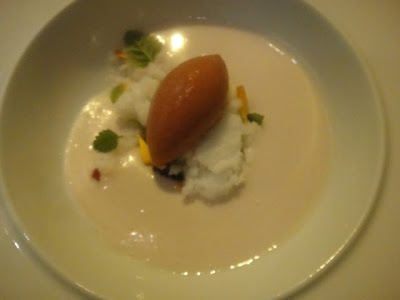 Chilled cream of white peach with lemon verbena, blackberry and champagne snow
I liked the sweet, soft peach slices. This dessert was refreshing and not heavy, which was a perfect selection for a late night dinner. 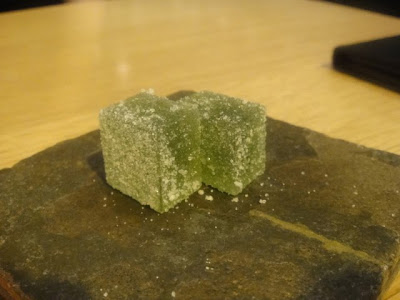 Absinthe gelee was served with the bill.

Dinner at Commis was an amazing experience. It's really unlike anything I've experienced in a while. The dishes wee unique and the ingredients used were interesting. I liked the use of fresh ingredients and the gorgeous edible flowers. The plates were well executed and the flavors were spot on. The presentation was intricate and was something you would find at a high-end restaurant. Yet the prices at Commis were very affordable. You'd be hard pressed to find a 3-course meal at a Michelin Star restaurant for under $60. Service was attentive. My water glass was constantly filled even though we were seated in a corner table. When I dropped a fork, I saw the hostess dash over to replace it even without my beckoning. I liked that Commis served an amuse bouche, a palate cleanser and a gelee, just like at a fancy restaurant sans the stuffiness, pretension or the high price tag. Commis really is like that neighborhood gem. It's something so special that you feel you have to share with the world. And it seemed that Chef Michael Tusk of Quince felt the exact same way.

Wow - everything looks gorgeous! What a find! I'm with you on the cold soup though -- I want to like it, but I just can't do it!

SinoSoul - You def should try it when you next visit your bro. It was my best meal in SF from that weekend.

Diana - Thanks! Normally a dessert for me wouldnt be too bad but I had trouble trying to pick just 1 starter so I had to chuck the dessert.

I absolutely loved this cold soup... aside from the cold soup comment, your review is spot on! A real gem. I'm equally excited and nervous when it gets more of the attention it deserves. Hopefully, it will maintain the exquisite food, service and prices.