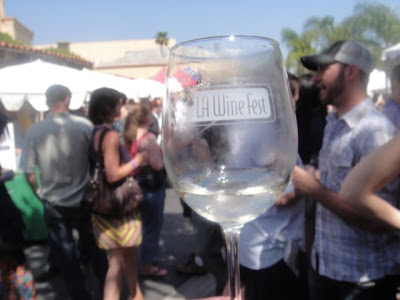 The LA Wine Fest was held this year at Raleigh Studios in Hollywood on June 5 & 6. I was pretty stoked for a couple reasons. #1. I love wine. I'm not a wine connoisseur. I don't swirl a wine glass like an expert. I don't sniff wine and share my thoughts about its scent and flavor. But wine is my drink of choice at home and out on the town. #2. It's local! I've taken a few wine trips to Napa, Paso, Santa Barbara, Temecula, Australia, France and Chile, which were all fun trips, but it's kindda nice to be able to take a cab to the venue and go home to your own bed. Also, it's way cheaper than an airline ticket! #3 Media Pass. I don't usually get much freebies so it's nice once in a while. #4 All you can drink! Need I say more? 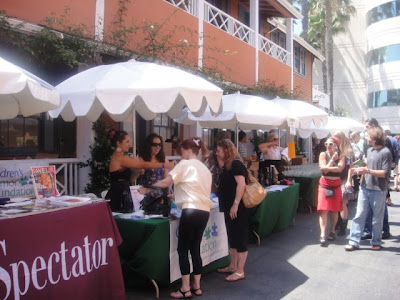 After attending a few beerfests through the years, I have to say that the LA Wine Fest runs like a well oiled machine. When we first checked in at the event, there wasn't a massive line. No confusion as to where you needed to go. It's pretty darn organized. You received a wine glass and a booklet with a map and list of vendors. The latter was something that was crucial and lacking at the recent LA Beer Fest because come on, with over 130 stands, you really do need a guide to get you around. I'm not sure what the attendee count ended up being but it didn't seem crowded like the beerfest or LA Street Food Fest. 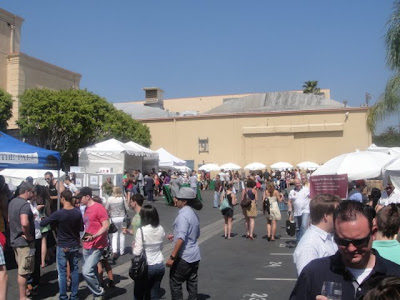 Raleigh Studios ain't nothing like the glamorous Sony and Paramount Studios where previous beerfest were held but it wasn't a big deal because all that was needed was a spacious outdoor venue. And it was a gorgeous, warm LA day. After we grabbed our glasses, we went in search of sparkling wine which is a must-have on a hot afternoon. 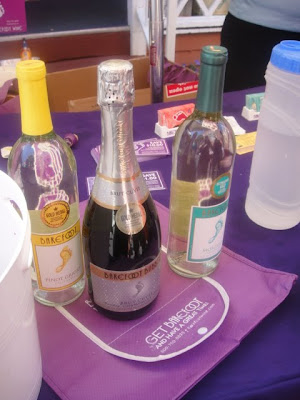 SUCCESS! At the Barefoot booth. 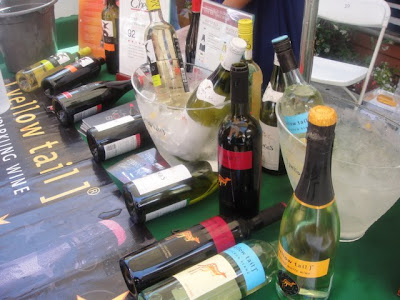 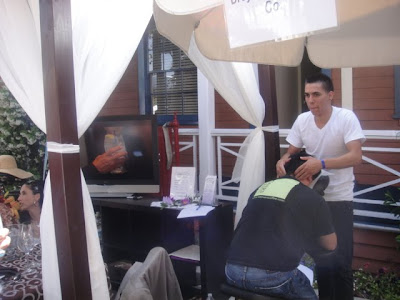 There was free massages offered but I don't think I want some random dude rubbing me down in 80 degree weather. Or at least I'd like to choose which dude. 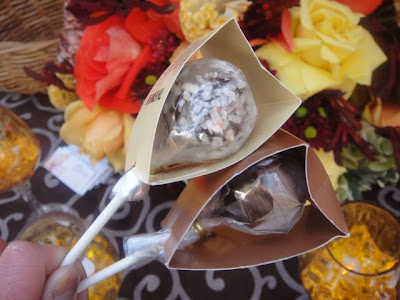 City Club on Bunker Hill, a private business club and event location, handed out chocolate truffles which you had to eat quickly before it melted. 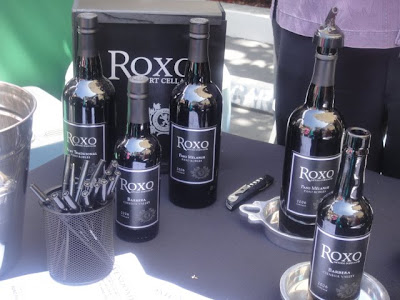 With chocolate, it was fitting that our next stop was Roxo Cellars from Paso Robles where they specialize in port wine. This was one of my favorite tastings. I don't drink port all that often and especially not in the heat, but they were quite good especially the Barbera. 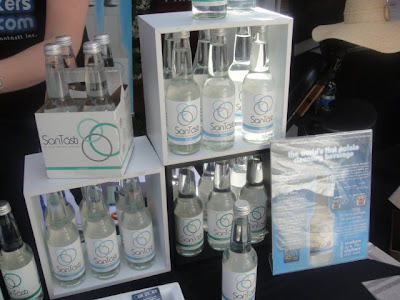 SanTasti is a palate cleanser that tasted like sparkling water. It's supposed to refresh your tastebuds between food or wine courses. 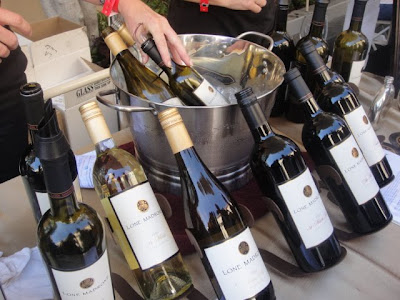 Our strategy was to hit up every stand that had an ice bucket of chilled white wine. It's hard to drink a heavy cabernet sauvignon in the afternoon. There was a strong representation from Paso Robles wineries which I liked because they tend to be smaller and more intimate wineries. I found most of their red wine to be intense yet smooth.

Besides wine, there were tequila stands, and because this is a food blog, I had to hit up some of the food stands that offered cheese and chocolate samples. 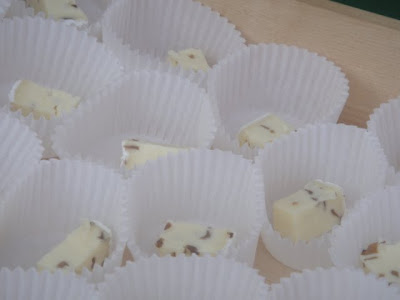 I don't like cheese *barf* so I didn't have any but apparently the champignon brie was good. 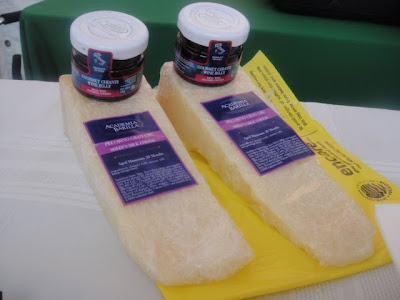 Ok, I did say I didn't like cheese, but I make an exception for Parmesan, Pecorino and sharp cheddar. Academia Barilla offered a cheese sample. 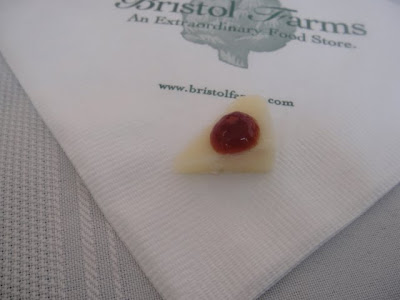 This was a great combination of aged Pecorino and Chianti wine jelly. It was a tiny slice of Pecorino but the flavors were intense and salty. If you need more, you can get both items at your neighborhood Bristol Farms. 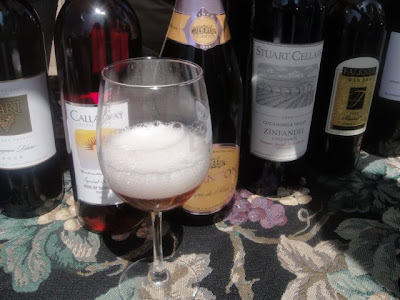 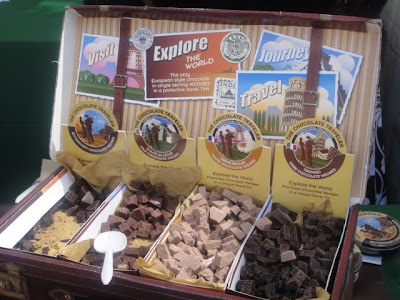 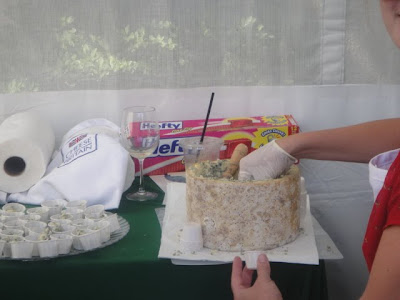 Here's a scary photo of a woman scooping out stilton. I think I'm feeling a little nauseous. 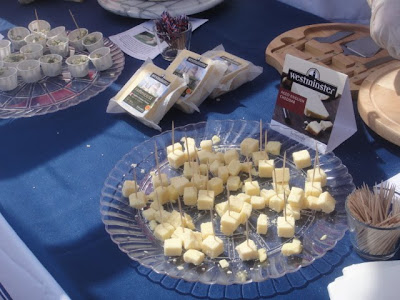 I didn't dare go near the blue cheese but I did sample their dry aged cheddar which was so good that I went back for seconds. 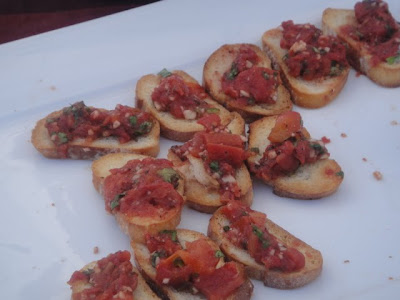 Bruschetta from Muir Glen was made from organic tomatoes, garlic and fresh basil. 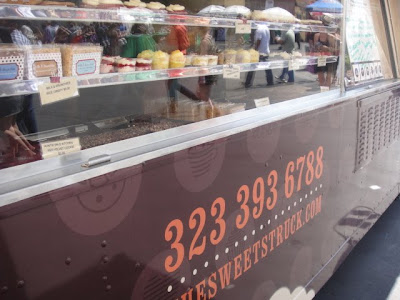 The Sweet Truck was present. Other food trucks/stands present were La Piazza, The Tasty Meat Truck, downtown's new Must Bar, the studio's Raleigh Grill and Tsunami Sushi. Frankly, I was quite disappointed with the food offerings. Firstly, Border Grill and Let's Be Frank trucks were slated to show but they were nowhere to be found. Secondly, what's up with sushi and studio kitchen food? Where's the grilled cheese truck? That would go well with wine. Gourmet-casual trucks such as Flying Pig, Worldfare, Gastrobus or a crepe truck would have been better pairings with wine. 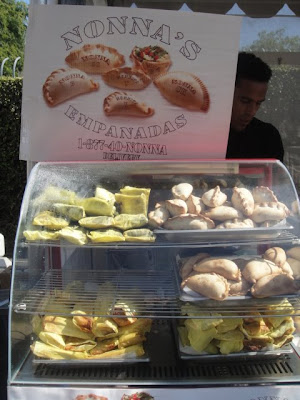 I was excited to try Nona's Empanadas which recently opened on 3rd Street in West Hollywood. 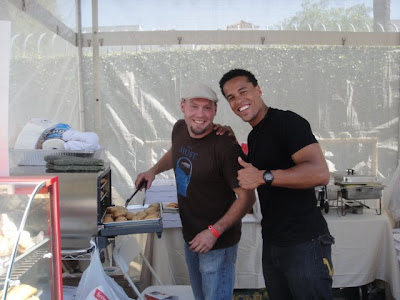 These boys insisted on being in the photo. Looks like they were having a great time. Unfortunately, I didn't have equally a good time with Nonna's. 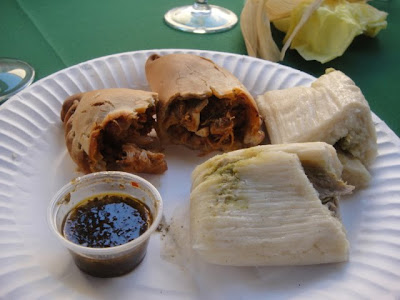 The tamale was very tasteless and chalky. The blandness is not something you would expect from Argentine cuisine. The meat was dry and just very unappealing overall. The masa was starchy and chalky. 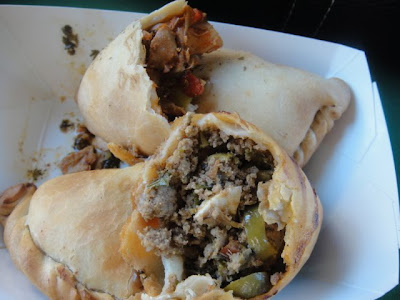 I had a major issue with the empanada. I asked if there was olives and was told there weren't any. I hate olives. Yes, I hate cheese too. I know... I'm picky. There were olives in both the beef and chicken empanadas. To top it off, the pastry was dry and needed more butter and some seasoning. I was saddened because I love empanadas and was excited when I heard another empanada joint had opened. Unfortunately, Nona's didn't do it for me. I wonder if it would have tasted better at the restaurant but I wouldn't believe so because they did bake the empanadas on site. 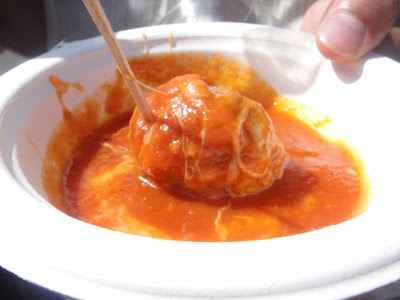 LA Wine Fest was a blast, I'd recommend it to anyone that enjoys wine or just chilling out with friends at an outdoor alcohol festival. There were many different wine selections and 4.5 hrs of all-you-can-drink is quite a feat. I did wish that there were more representation from sparkling wine varietals. The food was disappointing though. The selection was pretty lame. I thought gourmet food options should have been available. Perhaps next time we could get some pork belly or duck sliders to go with all that wine.

I'm so glad I ate before. Food choices were definitely a MISS. But so great to finally meet you! :)

Awesome meeting you too and glad we have our next dinner planned :)

Hello from the Border Grill Truck! We apologize if the LA WineFest promoted us being there on Saturday and Sunday. We were only scheduled to be there on Sunday this year. We are SOOOO sorry we missed you!! We hope you will visit the truck soon! You can follow us on Twitter @bordergrill for location updates or find us on Facebook. THANKS!!

Hi Libby- thanks for clarifying! I read somewhere that the truck was undergoing repairs so good to know you made it out on Sun! Hope you got a great turnout. Will have to catch you next time

Looks like I missed some good fun, but I had another party planned that day.

Also, I'm not a lover of olives nor cheese. I can take some cheese, but my Asian-ness says NO to bleu, and those other nasty ones...