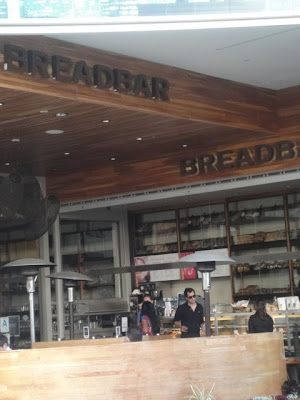 When anyone asks me what my favorite meals in 2009 were, Church and State is always on the top 5. Our meal was exquisite from the gougere amuse bouche, to the mouth watering pig's ear and pied de cochon, ending with their lovely fig tart. C&S ignited in me, a hunger for pig's ear. Since that night, I've been on the lookout for pig's ear that were as luxurious as theirs. Still looking. Walter Manzke was the chef at helm at the time but has since departed. He is
supposedly working towards opening his own restaurant in the city. When we heard that Manzke was guest cheffing at Breadbar's Hatchi Series in Century City, we immediately secured a reservation. Hatchi is a series of one-night dining events whereby a guest chef prepares 8 dishes for $8 each. Manzke's menu included dishes inspired by various countries. The first time we attended a Hatchi Series (w/ Marcel Vigneron), we ignorantly ordered every dish each. I was stuffed silly. The food was good but service was BAD. Second time round, we hit up Iso Rabin's night. This time, the service was a tad better but the food wasn't memorable. Well, third time's the charm.

With such a strong culinary resume (he's worked at El Bulli, Patina and Bastide), it's no wonder that the event was sold out and possibly every foodie in town was present. That includes every blogger in town. kevinEats wrote up a great entry with pretty pictures, and I'm sure the rest of the LA bloggers will be posting their entries shortly. Although I'm not in the tight little blogger circle (I'm kindda the newbie, you know.. the gal who starts school in the middle of the semester), everyone I met felt like old friends. I got to meet awesome bloggers SinoSoul, weezermonkey and Rants and Raves and put faces to blogs. 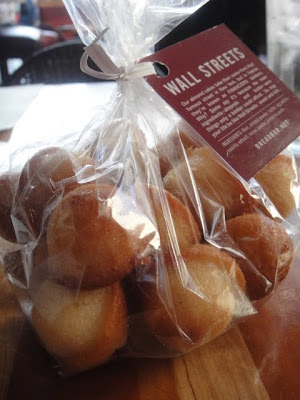 While I was waiting for my friend to arrive, I scoped out the display of baked goods. You know me and carbs. Can't resist them. I love financiers and don't see them sold often so I grabbed the last bag. Financiers are teacakes that are usually shaped like a cuboid (or a gold bar, get it? financier? never mind) and have a mild almond flavor. These were absolutely delicious, so buttery and spongy that one popper just wouldn't be enough. 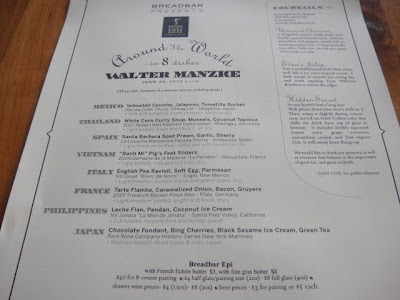 The menu is simple with only eight dishes offered. You should plan to share dishes amongst your party but the restaurant asks that each person orders a minimum of 4 items each, which can include drinks. They offer a special selection of cocktails for the night as well as wine pairing or wine by the glass. 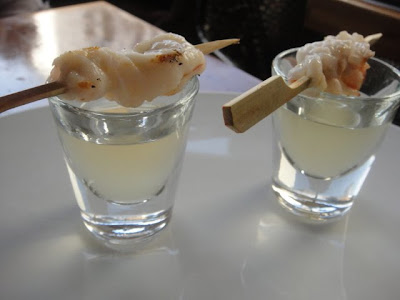 Amuse bouche - grilled shrimp cocktail
The shrimp was grilled well with sufficient seasoning. The cocktail shot was a warm broth. Our waitress mentioned that there was tomatillo and horseradish in the broth but I couldn't really taste those flavors. 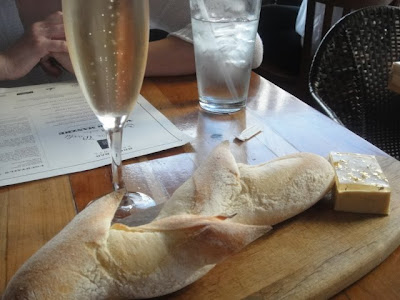 Epi with foie butter
There was another butter option (French Echire) but when foie is on the menu, I cannot resist. The bread was surprisingly decent and warm (my expectations were low because I've had pretty crappy bread at one of the prior Hatchi dinners). The foie gras was rich and creamy, and melted onto the warm bread. It was topped with a lavender and honey gelatin, and edible gold leaves. I really enjoyed the combination of the sweet honey and the foie. 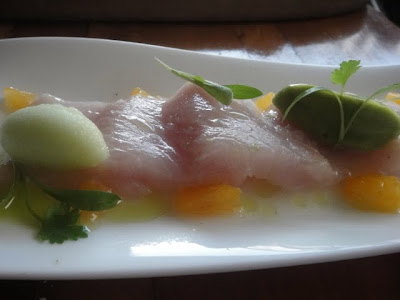 Mexico -Yellowtail ceviche, jalapeno, tomatillo sorbet, avocado
I thought this dish was OK, nothing special. The pieces of fish were relatively thick, I would have preferred it to be a bit smaller or thinner. In addition, I didn't really get the citrus flavors of a ceviche. This seemed more like a sashimi dish than a ceviche. The colors were pretty though. 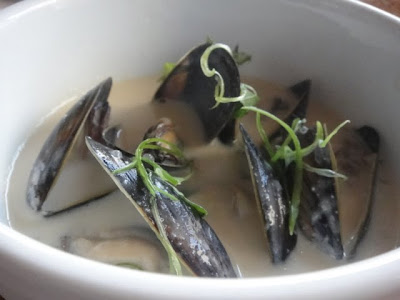 Thailand - White corn curry soup, mussels, coconut tapioca
I was a little apprehensive of ordering this dish because you can get amazing Thai coconut soup at many Thai restaurants around town, however this was delicious. I liked that the broth was light and not thickened with coconut cream which some Asian restaurants tend to do. The flavors were authentic and the mussels were perfectly cooked. I also liked the little transparent tapioca pearls which added additional texture to this dish. The broth was perfect for bread dipping. 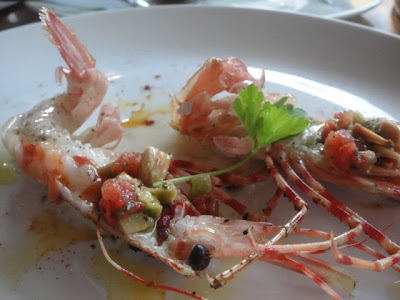 Spain - Santa Barbara spot prawn, garlic, sherry
This was similar to a dish that I had ordered at Church and State and both times, I did not particularly care for it. I have to preface this by saying that it's a personal preference. The prawns were topped with a nicoise and I dislike olives. I scraped it off the prawns but the tangy taste remained. The prawns however were grilled to perfection and well seasoned. 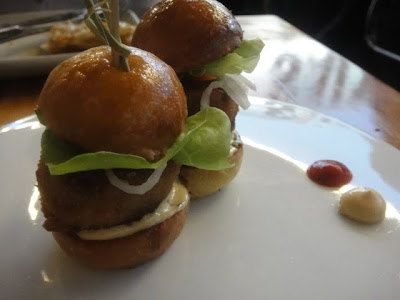 Vietnam - “Banh Mi” pig’s feet sliders
I like how banh mis are appearing all around town. Manzke's version is innovative. In lieu of chicken or grilled pork, he breaded up chopped up pig's feet. This tasted exactly like the pied de cochon that I had at Church and State. The pig's feet was buttery, soft and slightly gelatinous inside, and was sandwiched between fresh brioche buns. I also enjoyed the pickled vegetables in the slider. This was my favorite dish of the night. 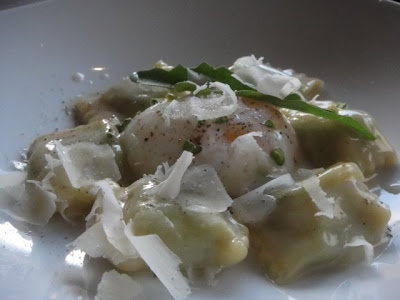 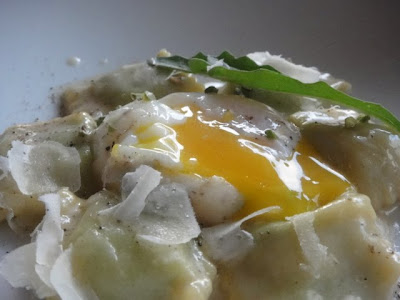 Italy - English pea ravioli, soft egg, Parmesan
I'm not a pea lover (I still meticulously pick out every pea from fried rice) but I enjoyed the pureed peas as they were sweet and didn't have that raw pea flavor. The broken yolk really bound everything together, adding richness to the dish. The pasta itself, however, was a bit starchy and thick. I felt that the thick pasta buried the flavors of the peas. 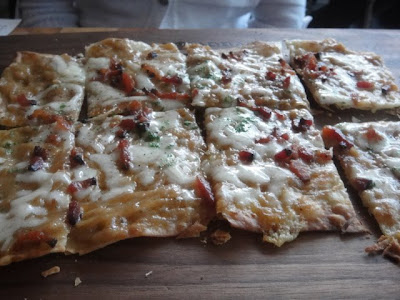 France - Tarte flambe, caramelized onion, bacon, gruyere
So yeah, I hate olives and peas. Here's another one, if you don't already know. I don't like cheese either. We were going to pass on the tarte flambe because of my hatred towards cheese but finally decided to order it because it was the French inspired dish on the menu... and Manzke excels in that cuisine. Light on cheese though. I was floored by the tarte flambe. The tarte wasn't heavy because the crust was thin and crispy. I really liked the smokiness of the bacon and the sweetness of the caramelized onions. The gruyere, thankfully, was very mild. I thought the ingredients and flavors worked really well together. Another top dish in my books. Philippines - Leche flan, pandan, coconut sorbet
Even though I was stuffed at this point (the bread and foie really did me in), I had to order a dessert. The flan caught my eye because I love pandan. Growing up in Singapore, my favorite cake was the pandan cake from Bengawan Solo *Drool* The flan was smooth and had a thickened custard texture. I didn't think it was too sweet which some flans can tend to be. The pandan foam brought back wonderful memories of my childhood. Wish they had made a pandan sorbet instead of coconut. That would have been killer.

There was another dessert on the menu (Japan - Chocolate fondant, Bing cherries, black sesame ice cream, green tea) but there was no way I could consume any more food.

Of the three Hatchi Series events that I've been to, this was by far the best. Not only was (most of) the food delicious, but service wasn't as horrible as some of the past events. I've notice that twittersphere was buzzing (or is it twittering? chirping? I'm a stranger to this whole twitter thing. I want to barf every time I think about how I'll need to learn a completely new set of rules in order to use the seemingly easy-to-use social networking site) about the poor service. But through the last events, I've come to realize two things...
#1 Yes, the servers are NOT going to be knowledgeable about the menu for the most part. It's a one-night event. Some don't care to learn the menu, others probably just can't recall what goes into it.
#2. The plates are going to come out sporadically and will be non sequential to the menu listing. I've already had my beef when I was swamped with multiple meat dishes at the table during a past event. I was livid at the time but eventually, I got over it. It took me a couple months.

I was lucky to experience decent service so it was an enjoyable night for me. I got to relive Manzke's cooking while staying in the Westside (yay!). I got to meet cool bloggers whose blogs I read religiously. The food was delicious and well executed. Banh mi sliders!! And lastly, I got a baggie of financiers to-go that will hopefully last me more than a day. we'll see...

Hey Steph, where were you seated? It's too bad we didn't run into each other.

Such a pleasure meeting you! Thanks so much for putting up with us next to you -- you and your friend were so sweet to share not only your thoughts on the food, but also your actual food!

I'm sort of a newbie, too, but all the chatter on Twitter got me into the mix pretty quickly.

Yay! I'm so glad to have finally met you! It was really fun being your neighbor that night...thanks for letting us examine your food and for sharing your opinions and your leftover foie gras butter. haha

Hope to see you again soon!

Soooo sorry I ate 1/2 of your foie butter. Please apologize to your tablemate. Owe you $4. Haha!

PS: you clearly had a better meal than we. Hatchi can suck my donut hole.

Have you had the pigs ears at Animal? I've heard they're very good! (From someone who's had the ones at Church & State)

Wish I'd have been there to rub elbows with all the cool kids too! I've been doing this two years, but I still feel like a newbie.

Looks like an awesome series! I am going to breadbar on 3rd soon for ramen, can't wait!

weezermonkey - I hope we gave you the right recs, I think we did cuz it seems you liked the pasta. hope to see you real soon :)

daily gluttony - sitting by you guys made the night soo much fun! p.s. those financiers made a good breakfast with coffee for the next couple days.

sinosoul - hahah its ok, i look very generic. please.. the foie was all yours, My friend didn't eat any so essentially I already had half of it to myself! Sorry your Hatchi experience was bad. they really need to get their act together!

Diana- yes! I've had the pigs ear at Animal. Love the fried egg that they served it with.

Anna- I'm going to the ramen series too! on the 14th. sooo excited!