Around the world in 1 night: German- Korean Biergarten and London's The xx concert 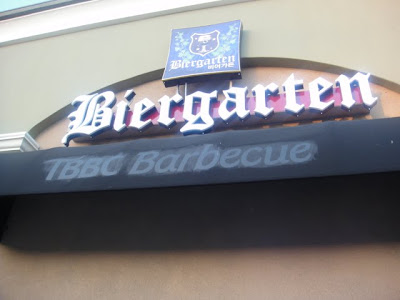 I was in search of a place to grab drinks before The xx concert at the Wiltern Theatre in Koreatown. Usually we'd hit up some Korean BBQ joint down the street but this time, we were looking for something lighter. I recalled reading about Biergarten on LA Weekly and it seemed like the perfect fit for the following reasons.
1) It's spelt the correct way. That's German. Even though the owner Neil Kwon is Korean and the bar is located in Koreatown and serves an Asian fusion menu, it's really a westernized bar in so many ways from its beer selection to the vibe.
2) They offered a good selection of craft beers. None of that domestic watered-down beer. I don't drink a lot of beer (unless I'm snowboarding, hot tubbing in our Mammoth condo or out at an LA beer bar like 5th Amendment Alehouse or Surly Goat) but when I do, it's usually a Belgium blonde ale or a saison in the summer.
3) Good bar food. I'm not talking about potato skins or nachos. I'm not even talking about bratwursts. The menu is Asian inspired such as kalbi tacos, spicy wings and okonomiyaki.
4) Within walking distance from the Wiltern Theatre. It's really about a mile which is the perfect distance to walk back after dinner.

When we arrived, the place was packed. Apparently the Laker game was on, game 2 of the NBA Finals. I didn't know. Guess I'm not that into basketball. In my defence, I've been stuck in a late-night-working-cocoon so I haven't kept up with what's going on in the world. As we stood around surveying the seating situation, a waiter rushed over and apologized repeatedly that there wasn't a seat available. There were two minutes left on the clock so tables would clear out shortly. I wasn't that concerned. After all, I'm used to standing around at crowded Hollywood bars. But his concern was an indication of the good service at Biergarten. 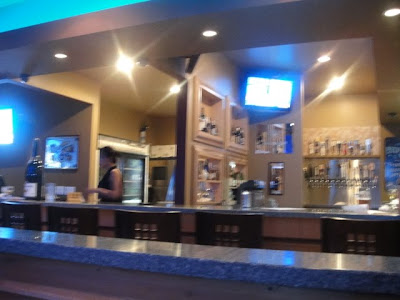 This isn't your typical Korean pub. It's not dark, dingy and smokey. In fact, it's modern and fits right in with the crop of gastropubs popping up all over town. The extensive list of European and American beers proves that this is a bar that wants to stands out in Koreatown. Owner Neil Kwon is really hoping to cater to everyone, not just Koreans. And you can see why. He himself seems to be a nice blend of Korean and American. He speaks perfect English, has big dreams for his bar, is well traveled and wants to share these experiences with everyone else. He wants to attract non-Koreans who are in search of good beer and food while at the same time, introducing and educating Koreans on such beers. He says that Koreans are slowly beginning to embrace this not-so-Korean bar. They are beginning to welcome Fat Tire into their drinking session. I also saw some patron begrudgingly but acceptingly step outside for a cigarette. 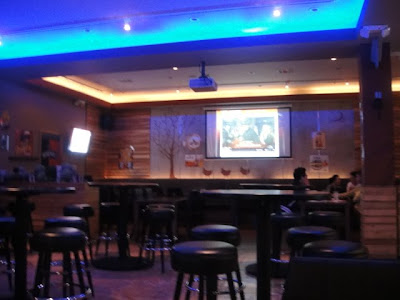 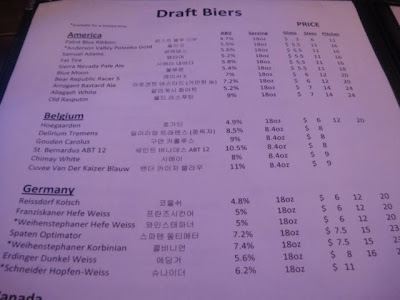 They offer over 25 beers on tap, from Belgium, Germany, Canada and the States. They are served in either a glass, stein and/or pitcher. They do offer Korean beer Hite but only on bottle. The prices were all very reasonable compared to other gastropubs. 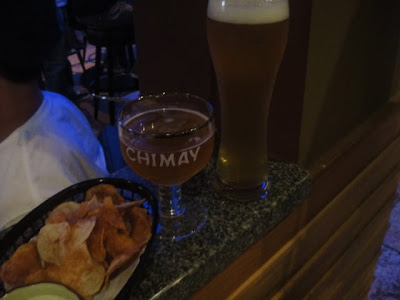 We started with a Gouden Carolus and an Allagash White. I really enjoyed the Gouden Carolus which was so refreshing with a slightly sweet finish. Our waiter also brought by a basket of potato chips. Do not be fooled. These aren't Lays chips. They are homemade and pretty darn good. 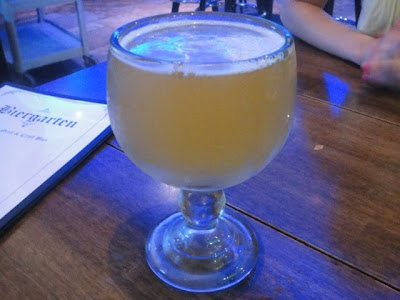 Unfortunately after the hoards of Laker fans left after the game, they also depleted some of the beer options. My next beer was a Hoegarden in a huge goblet. 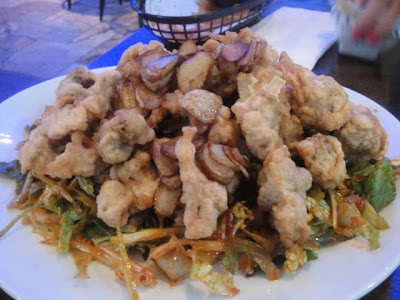 Fried chicken gizzards on a bed of pepper vinaigrette salad with citrus ponzu sauce
I just couldn't help it, I had to order it even though I knew it was going to be just me eating this whole plate of chewy goodness. I liked that the gizzards were tempura battered instead of flour battered because the coating was a little airy and it didn't taste greasy. It went really well with the citrus ponzu dipping sauce. The kimchee and salad was very tasty but alas, when I'm faced with gizzards, salad and only one stomach, the salad had to step aside. 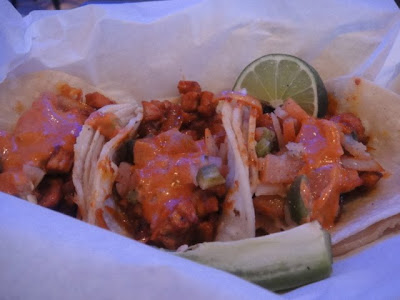 Spicy pork taco with kimchee salsa and for fusion sauce
The pork was seasoned well and topped with a thick and very spicy sauce. The sauce reminded me of spicy Korean wings. 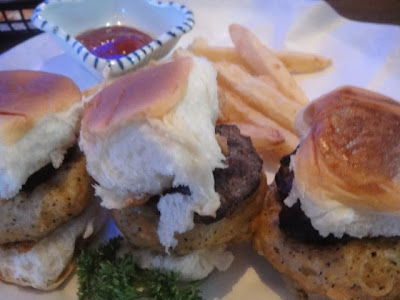 Kings Hawaiian peanut butter sliders with seasoned patty, citrus peanut sauce, beer battered onion rings
Peanut butter and beef sounded like an interesting combo so we had to try for ourselves. It worked really well. The nutty spread was a good cohesive to the bun and patty and it added a creaminess and sweetness. The patty itself was seasoned well. And Kings Hawaiian buns never fail. They were perfectly toasted. When I saw french fries on the side instead of onion rings (which was listed on the menu), I was a bit disappointed until I took a bite of the slider. The perfectly battered and seasoned onion rings were in the slider. So I get onion rings and fries? Win and Win! I'm a fries whore so they were gone in a split second. The dipping sauce was a homemade chipotle sauce. I really liked it because it was a nice spicy surprise if you were expecting it to be ketchup.

Biergarten is the kind of place that I would definitely return to, and bring loads more friends with me. There was a lot of thought and attention that went into the menu. The food menu had really interesting items that I'd like to try such as an octopus noodle dish and the beer can chicken which is a whole chicken that they apparently carve tableside. I liked how everything was homemade, from the dipping sauce to the complimentary potato chips. They could have copped out and gone with Heinz or Lays but instead they made it from scratch, and it really shows. The service was awesome. Our waiter (who kept apologizing, at least three times, when we weren't able to be seated right away) was friendly, attentive and knowledgeable about his beers. Owner Neil was just passionate about his venture and is always open to suggestions and improvements. I liked that this isn't just a "Korean" joint (we're not Korean). It's Westernized in so many ways from the beer selection to the decor and service, yet it holds on to some of its Asian influences through the food menu.

Hits: dishes are unique, food, service
Misses: some of the beers ran out
Rating: ***

Afterwards, we made our way over to the Wiltern Theater for the sold out show. It was a good way to walk off some of that fried gizzard. The xx is a British indie-pop-electronic band. 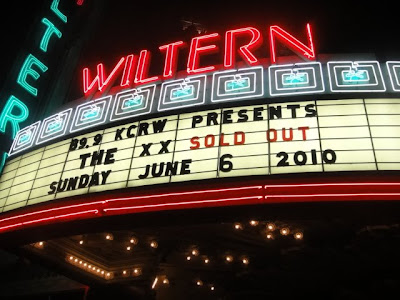 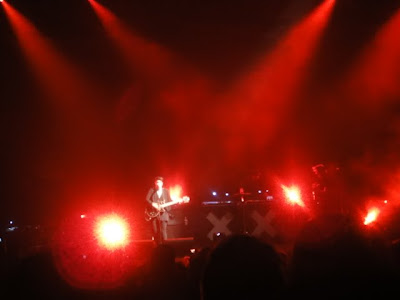 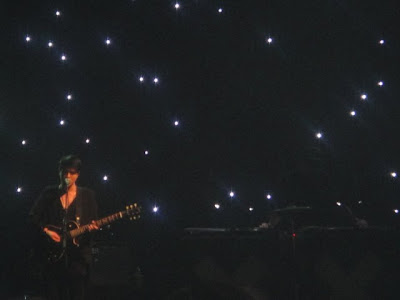 They started the night with the mesmerizing Intro, track one on their debut album. If you don't know who they are, check them out. Their album xx is amazing from start to finish.