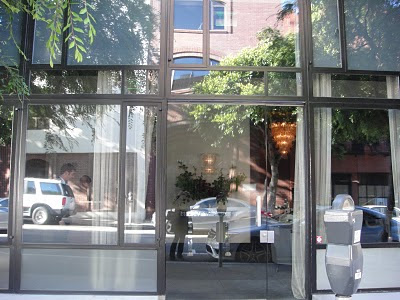 Maintaining a food blog can be challenging at times. You have to ensure that you have enough fresh content to keep your readers entertained, especially during the weekday when they need to take a break from working. As such when I travel these days, I try to build in some restaurant hopping. So when I was planning my trip to San Francisco over Memorial Day weekend, I did some research to figure some spots to hit. I have to admit, I don't know much about the SF dining scene. Most of my mom's side of the family live in SF so all my dining experiences up north have always revolved around Chinese restaurants.

San Francisco is supposed to be a city of reputable dining. In fact, many claim that they have a better dining scene compared to LA. Even the Michelin Star guide abandoned their LA and Vegas editions in 2010 but kept SF on the publishing list. I was determined to see for myself if LA restaurants really couldn't compete with the ones up north. After some research, we decided on Quince Restaurant. It's chef/owner Michael Tusk has a strong resume from his time at Chez Panisse, Oliveto and Stars. Quince has earned One Michelin Star and is considered by many to be one of SF's top restaurants.

The restaurant is located in the Jackson square district, on a quiet street lined with art galleries. It specializes in farm to table cuisine, utilizing local and seasonal fresh ingredients. The menu leans towards Italian and Californian cuisine. 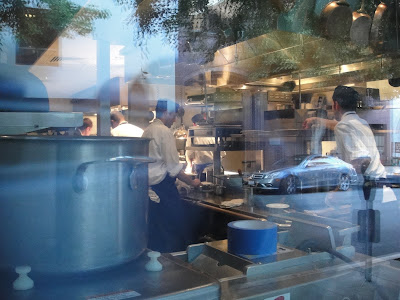 You can peer into the kitchen from the street and catch the chefs in action. 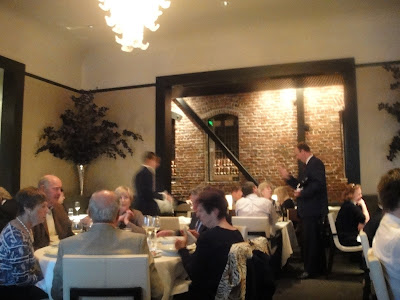 Quince recently moved into this new venue. Apparently it's previous location was a much smaller and more quaint space. The new Quince has an elegant dining room with chandeliers, suede couches, artwork on wall and brick walls. It is a more modernized version than the last but hopefully the quality of their food remains intact. 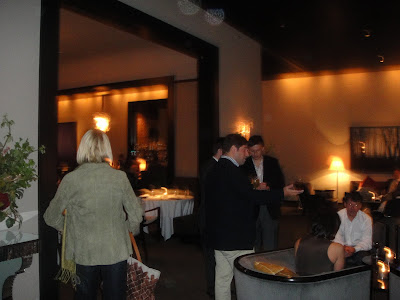 They also have a bar area where we decided to hang out while waiting for the rest of our party. 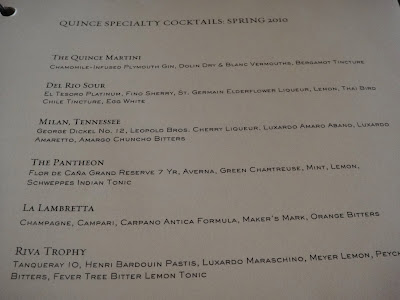 Their cocktail list is relatively short. Quite different from most LA joints. I've also noticed that most SF restaurants and bars didn't offer a lot of vodka based drinks. Most of the bars I frequented had more bourbon/whiskey drinks on their menu. Guess they're more hardcore up north. 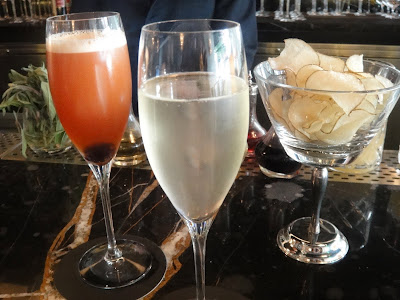 La Lambretta (Champagne, campari, Carpano Antica Formula, Maker's Mark, Orange Bitters) and Prosecco.
The Prosecco was a great start as usual but the La Lambretta was pretty strong. IMO, rather undrinkable. The homemade potato chips were addictive. They were wafer-thin with just the right amount of salt.

Quince is known for their pastas so I knew that I had to order that as my starter. The prices were in-line with what you would expect from a Michelin-starred restaurant. They had the sea urchin passion fruit risotto but you had to order it for the whole table at $25 per person. Unfortunately, I couldn't force that upon some of the less adventurous eaters at the table. Quince also offers a five course tasting menu but after last weekend's debauchery in Vegas, I decided to refrain from that many courses. 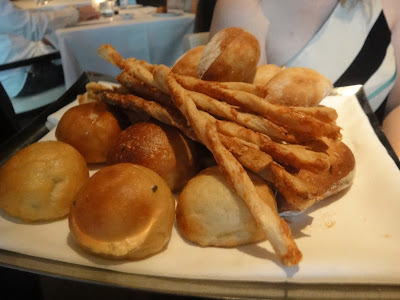 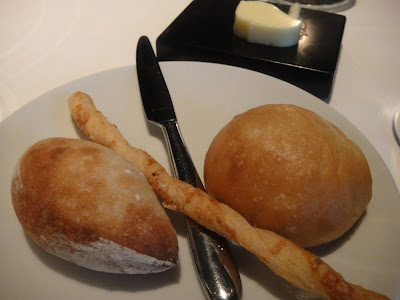 Bread was served with a choice of baguette, spring onion and fennel, and cheese sticks. All baked fresh and very delicious. Of course I had three servings of each item. 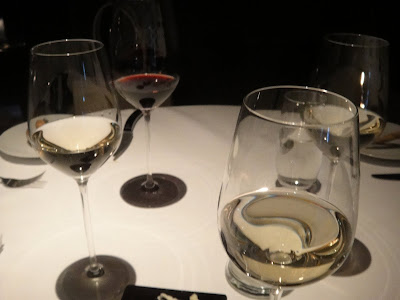 We ordered a bottle of Bourgogne Aligote wine, supplemented by a couple other wines by the glass. 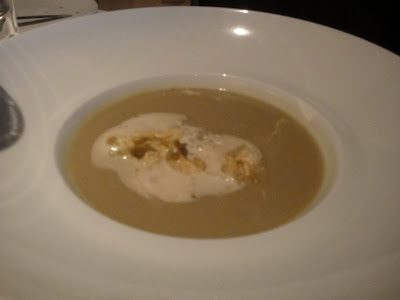 Artichoke veloute with summer truffle
I don't like artichokes so I didn't try this but it went well with the rest of the table. Apparently it had a very strong artichoke taste. Thank goodness I didn't sample it. 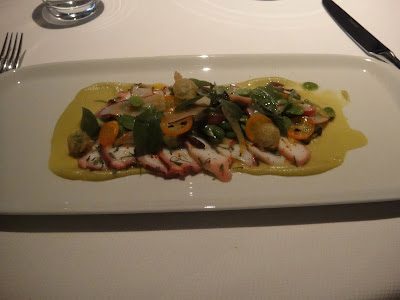 Carpaccio of octopus with green chickpea and kumquat salad
This was one of the favorites at our table. The octopus was thinly sliced with a light dressing. The pea flavored sauce was simple but tasted good. All the produce on the plate were fresh and Chef Tusk did a good job of utilizing the freshest seasonal ingredients. 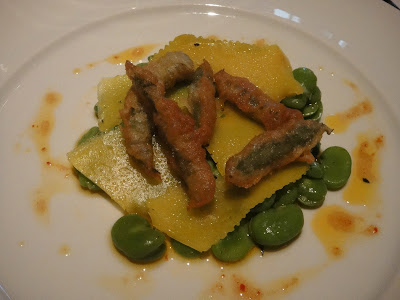 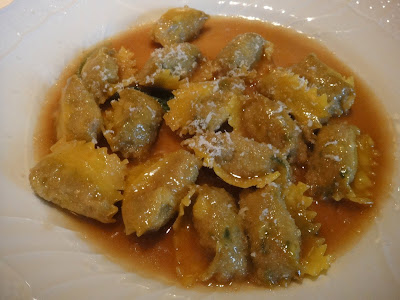 Agnolotti Dal Pin, Traditional Piedmontese filled pasta
The pasta was filled with a trio of meat that consisted of veal, suckling pig and rabbit. I've notice recently that a lot more restaurants are serving suckling pig as one of their ingredients. It's basically a piglet that has only fed on milk. It's more commonly known as a dish of roasted pig, usually over a fire pit. The suckling pig in this dish referred to the piglet, not the cooking technique of the pig. The mixture of the three meats might seem like a funk gamy combination but they were mixed together so you couldn't tell one meat from the other. They were also very tender types of meat. The pasta was cooked in a sage butter sauce which was flavorful and was viscous enough to pair well with the meaty agnolotti. 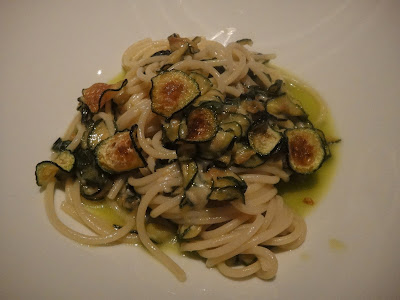 Senatore Caprelli Spaghetti with zucchini "alla carbonara" pasta
I liked the flavors of this dish as the sauce had a bit of sweetness to it and had a fresh basil flavor. Unfortunately when a dish is described as a carbonara, you expect something more creamy, satisfying and perhaps a bit indulgent. This dish instead was a simple vegetarian dish that didn't fulfil the expectation of a carbonara. 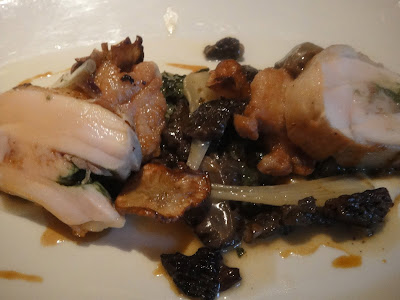 Four Story Hill Farm sweetbreads and chicken with Jerusalem artichokes, creamed spinach and ramp
I don't usually order chicken, let alone white meat, at a restaurant but the sweetbreads drew me to this dish. The chicken was surprisingly very tender and flavorful. Four Story Hill is a farm in Pennsylvania that feeds their poultry milk in order to give the meat a better flavor. I've never really bought into the whole organic, naturally fed meat and poultry movement, but after tasting this chicken, I wondered if the lovely taste was from the meat itself or if the credit should go to the chef and the kitchen. The sweetbreads were also cooked perfectly. They were tender with a nice soft coating. I also enjoyed the sunchokes which were fried and tasty. OK, I know it's weird. I don't like artichokes but I can eat sunchokes. Sunchokes, or Jerusalem artichokes, are in fact not artichokes and IMO, don't taste like artichokes, thankfully. 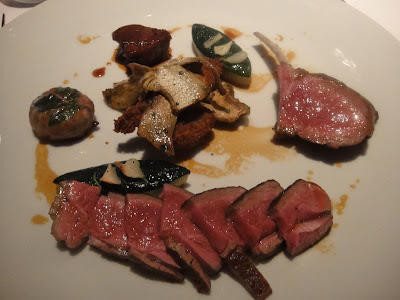 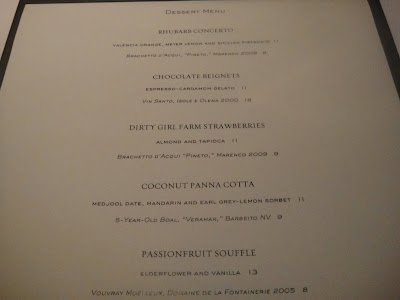 Desserts were up next. They had a couple choices which came with recommended wine pairing. 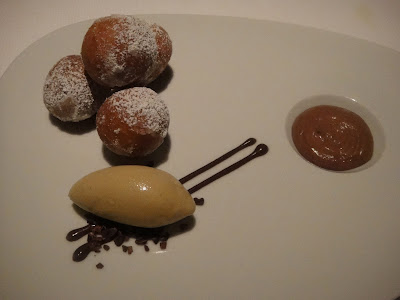 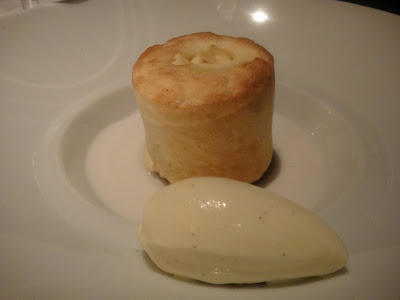 Passionfruit souffle with elderflower and vanilla 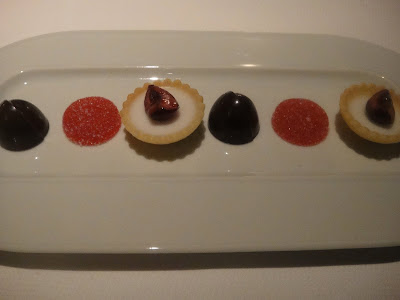 Service was exceptional. When one of our party spilled two tiny drops of wine on the table cloth, they rushed over to cover the spots with a napkin. It seemed that everyone worked together as a team. No one person was assigned to our table. Everyone helped out. One would take our order, another would clear our glasses while another would set our cutlery. We also got the chance to meet Chef Michael Tusk who shared some of his favorite spots in the area. It was because of his recommendation that we decided to forgo our next-day reservations at Ame Restaurant for one at Commis in Oakland. I really enjoyed what I ordered especially the chicken and sweetbreads entree. The food at Quince for the most part was well executed but I did think that the vegetarian dishes were lacking. The conclusion? The food at Quince was good, but I didn't think it was any more superior than anything you would find in LA. We have exceptional Italian spots such as Valentino, Osteria Mozza, Angelini Osteria, Il Grano, and the list goes on. Those critics don't know what they are talking about. LA fares just as well as SF if not better, and Michelin Guide had better reconsider.

I tried to make it to quince 3x. Just keeps getting stuck in the Mission area. Speaking of SF resto recs: SPQR. It's really spectacular in a comfy kind of way. Also, France's with its cocktail amuse "shots" and an amazing chestnut soup. I mean that soup was transformational.

SinoSoul - i love chestnut soup! Wonder if they'd serve it in the summer still. Thanks for the recs. This means I need to make another culinary trip up north...

Agree totally with the vegetarian comment. It's not a place for non-meat eaters.

Heather - i hear ya, your food (esp the fava beans) didn't look very appetizing. Did you notice that I didn't even try to steal your food? That's a sign!