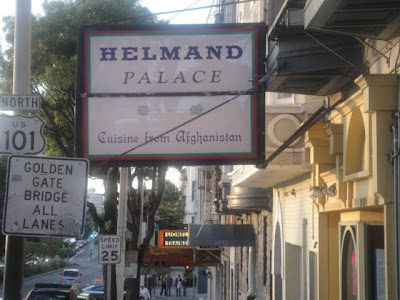 When I travel, I like to mix in a variety of fine dining restaurants with local favorites. My poor body just cannot take too many multiple-coursed, heavy French meals. Helmand Palace came up a couple times in conversation over the weekend. A few mentioned that it was awesome, others heard good things about it, and since it's located a block from my friend's flat, it was a sign that I had to fit it into my already-packed weekend dining schedule. 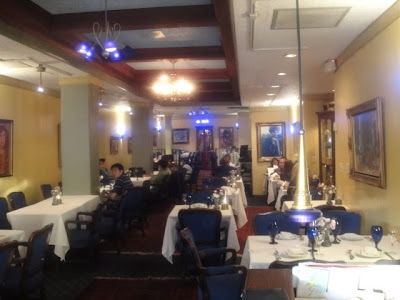 The restaurant is named after a state in Southern Afghanistan. It's located in Russian Hill. It's not fancy at all. It's just your regular neighborhood restaurant. But so much better. 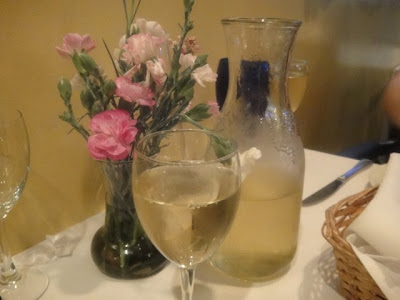 We ordered a carafe of their house wine. Their wines were affordable with glasses priced around $5-6. 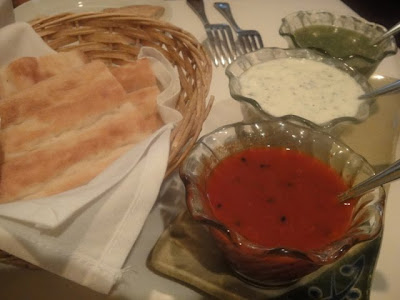 Bread was served with a trio of dipping sauces: cilantro, yogurt and hot sauce
I tested the yogurt out in hopes that it wasn't too thick. The consistency was perfect. A bit viscous and it had a tangy taste. The hot sauce tasted a bit like sriracha and the cilantro flavor wasn't too strong but instead had a nice citrus finish. p.s I hate cilantro. This wasn't offputting. The bread was warm and smelt fresh and a bit yeasty. 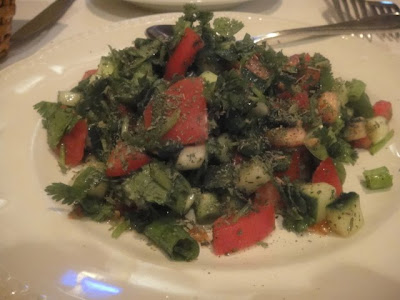 Afghani salad of diced tomatoes mixed with onions, cilantro, mint, white vinegar and cucumber
There was too much cilantro so naturally, I didn't enjoy this dish. That was all I could taste when I took a bite. They sure do love their cilantro at Helmand- most of the other salads had a heavy cilantro presence. 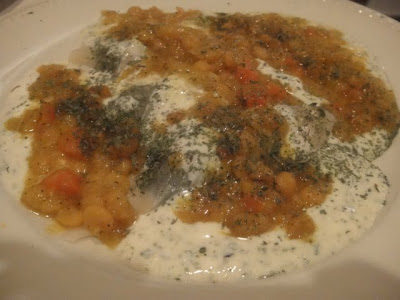 Aushak, Ravioli filled with leeks and scallions
This was one of the raved about menu items. The ravioli was delicious. There were a few huge sized pastas that were filled with leeks that were cooked till soft. The leeks in the ravioli reminded me of a Chinese wonton. The puree atop the ravioli was carrot and chickpeas. The white sauce was a mint yogurt and garlic mixture. The yogurt sauce was similar to the bread dipping sauce in that it was mild. The chickpeas weren't too soft and gave a texture to the sauce. They also have a non-vegetarian version that is topped with ground meat and mint. That sounds like an amazing combo. 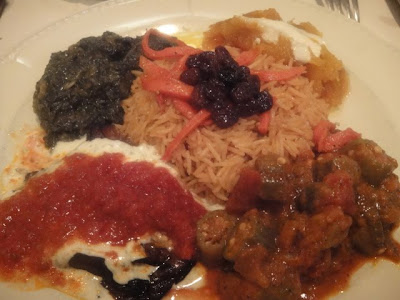 Veggie platter of baked pumpkin, pan-fried eggplant, spinach and okra served with pallow
The pumpkin is another house favorite. It was reminiscent of Thanksgiving dinner because it was sweet and tasted like candied yams. The eggplant flesh was soft with a fried exterior and was topped with the garlic yogurt sauce. The okra was stewed with tomatoes and was tasty. The spinach was not as flavorful as the other stuff. It didn't have as bold of flavors but it definitely was well seasoned and tasted like it had been simmering in vegetable stock. All of the vegetables and sauces were eaten with pallow, which is rice with strands of carrots and raisins. 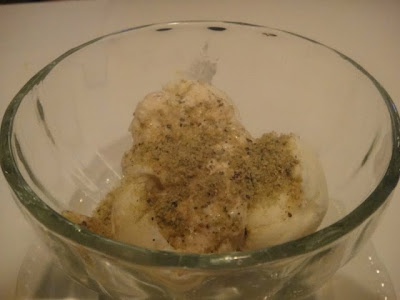 The meal ended with a big bowl with three scoops of home made ice cream with pistachios. I love homemade ice cream. It was creamy and milky, unlike the overly sweet ones you would get at the store.

The food was delicious and affordable too. The veggie platter was $15 and it didn't taste like your ole boring vegetables. I love dining at ethnic restaurants because the food is typically very flavorful and not bathed in grease like some American dishes tend to be. The photos scared me a little when I was doing initial menu research (I don't really like creamy sauces, Greek yogurt or anything that reminds me of moussaka) but the sauces at Helmand were very mild and not too heavy. The photos really didn't do them much justice. Sometimes, a $50 meal for 2 is way better than at a hip, overpriced or Michelin Starred restaurant.

NICE! This place is really wonderful. Haven't been in years! Still think about the pumpkin often ;-)

Gatronomer - Yes, this was def one of my better meals that weekend. Now need to find an Afghan place in LA, hopefully they'llave pumpkin too!