After a surf in Huntington Beach, we walked over to the pier to check out the US Open. Noooo silly, not the tennis match. The US Open of Surfing. But first, a post surf grub and most importantly, mimosas. It was already pretty packed in the area so we decided to hop into Duke's right by the pier. The restaurant is named after Hawaiian surf legend Duke Kahanamoku, has locations in Hawaii, Malibu and HB, and is always located oceanfront. 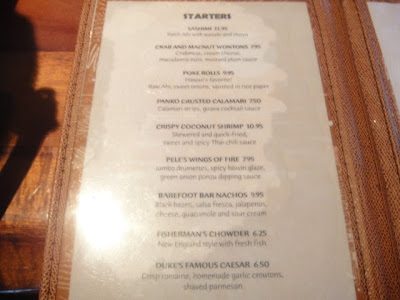 We grabbed seats at the Barefoot Bar. 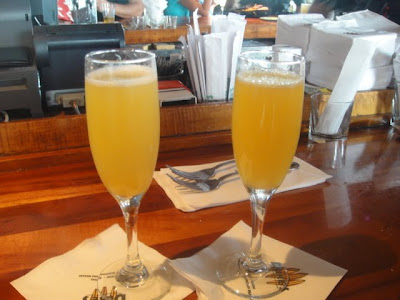 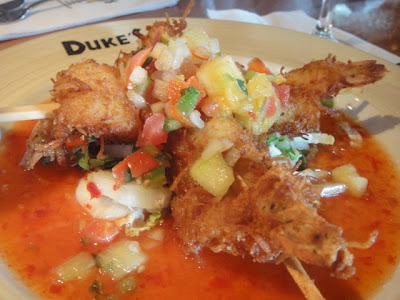 Crispy coconut shrimp (skewered and quick fried, sweet and spicy Thai Chili sauce)
There were four large pieces of shrimp which was a good portion for an appetizer dish. I liked the breading as it was crunchy and held its shape as you bit into a piece of shrimp. The coconut was flaky and added a sweetness to the dish. Unfortunately the sauce was a bit too sweet and syrupy, and IMO, ruined the dish. 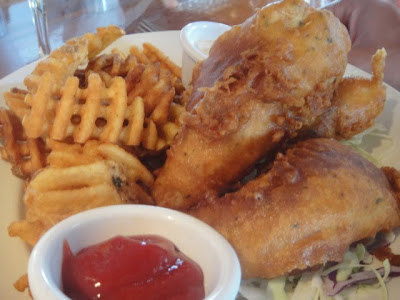 Island fish and chips (beer battered, island style tartare sauce, crisscross fries)
There was a lot of fish in this dish - three large pieces. The fish itself was tasty and the breading was fairly thick. I actually quite enjoy thick and crunchy breading but my friend thought it was too much. His loss, my gain, because I ended up eating most of the breading. Delicious. The fries were a bit starchy and didn't taste that fresh. If only they had regular or skinny fries.

The food was decent for a beach bar. I enjoyed my coconut shrimp sans sauce. I have to say that the portions were quite large at Duke's. Guess they have to feed famished surfers.

Afterwards, we got a spot on the pier and checked out the surf action. 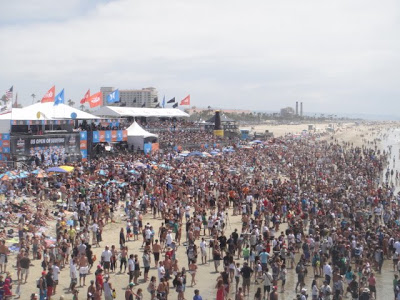 The nine-day event not only showcases surf contests but BMX and Skate. It's a pretty cool event as they also have art exhibitions, fashion shows and live music events, and we're not talking small fry- Weezer, Cold War Kids, Hot Hot Heat Switchfoot and Cobra Starship performed on various nights. The winner of the surf competition walked away with $100K. Not too shabby for a surf bum.

The waves weren't that huge (for a pro), about 3-4" faces, so contestants really had to bust out their tricks for a high score. Here are some sweet shots, wow, my Sony Cybershot DSC-TX1 did pretty well with the zoom. 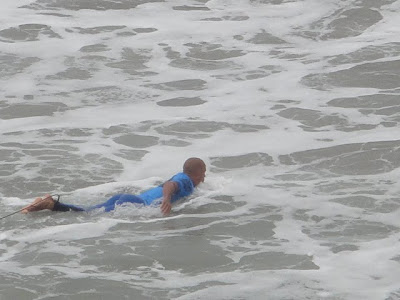 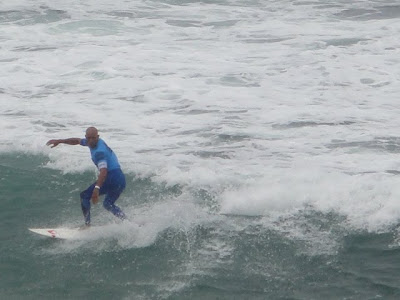 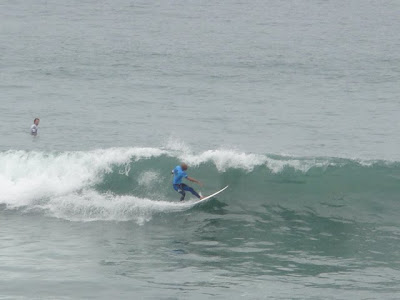 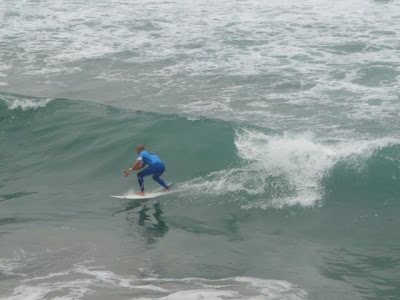 Back to back winner and local, Brett Simpson 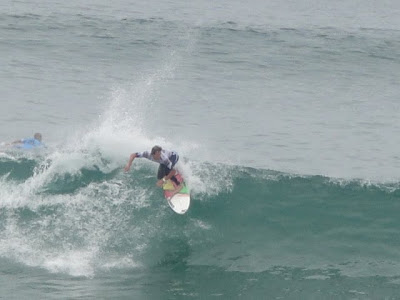 Perfect end to the weekend. Surf, mimosas and a tan. I LOVE living in SoCal, don't you?

you surf! no wonder you can eat all that fried stuff with no guilt!

nice pics! Ah, Dukes and HB, my old residence! Love coco shrimp too, but not for desert ;P

bagnatic - believe me, I have to also run 5x a week. so that I can eat all that fried stuff with no guilt..

Anna- I liked Duke's in HB cuz of the view except that weekend, the view was blocked by tents that they set up. I bet Duke's was pissed!

weezermonkey - no!! I didn't. They played the night before, but heard it was crazy crowded.. I prob would not have liked