"Tracking down" the Downtown Speakeasies @ Varnish and Villain

Just like the gastropubs and wine bars of yesteryear, speakeasies are all the rage in LA. A speakeasy was an establishment that serve illegal alcohol during Prohibition. Of course, the speakeasies of today are not breaking any laws. The speakeasies of a couple years ago really had that mystery factor, some places were at a secret location, required a password or were only open after 2am. These days, the term is thrown around loosely. The definition now basically encompasses bars that are generally dark, that may have a less accessible entrance, lack a signage, have decor that is reminiscent of the 1920s, and typically serve a lot of hard liquor.

We decided to hit up two spots in one night since they were both located in Downtown LA. Our first stop was Varnish. But first, some grub. 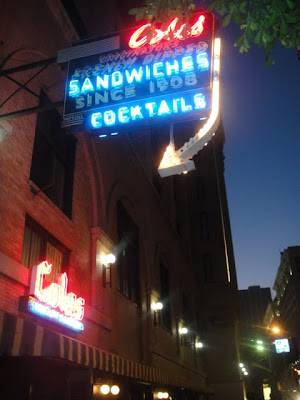 Varnish is located in the back room of Cole's French Dip. There's still a debate as to who is the originator of the french drip. Both Cole's and Philippe's are claiming the right. 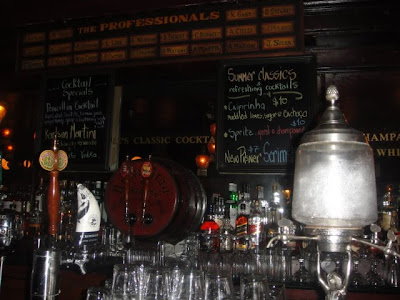 The bar area of Cole's was surprisingly pretty hip, somehow I thought the place would look more dinerish, given that it has been around for over 100 years. As it turns out, apparently Cedd Moss (Golden Gopher, Seven Grand) updated the place a couple years ago. 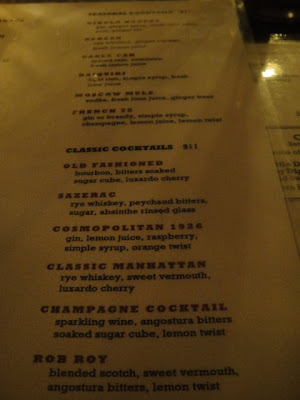 The cocktail list included some classic and seasonal drinks. The bubbly caught my eye, as usual. 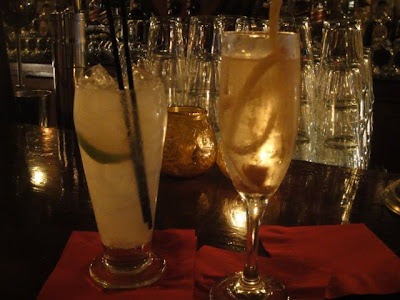 Champagne cocktail (sparkling wine, angostura bitters, soaked sugar cube and lemon twist) was a beautiful drink and delicious. I just wish they served it in a larger portion because it was gone in a matter of seconds.
Moscow Mule (vodka, fresh lime juice, ginger beer) never disappoints. 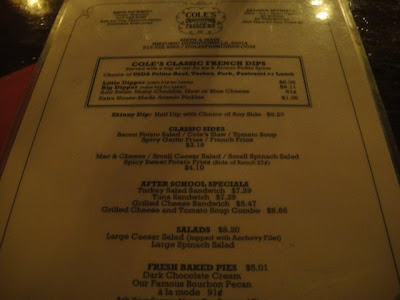 The menu is simple with their famous french dip offered in two sizes (with choice of Beef, turkey, lamb or pastrami) and a few other sandwiches. Since we were planning to grab a bite at our next stop, we decided to share a french dip. 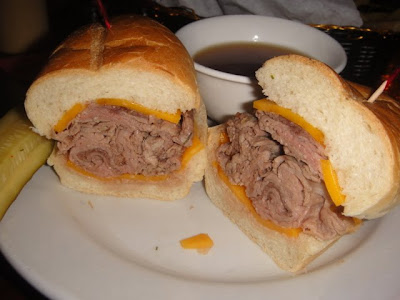 Little Dipper (USDA Prime Beef, sharp cheddar and a side of au jus)
I didn't think there was anything special to this french dip. The cheese was disgusting, it tasted like Kraft's singles but worse. The meat itself was alright, but it didn't melt in my mouth or wow me over. It wasn't luscious or juicy. Unfortunately it was very ordinary. 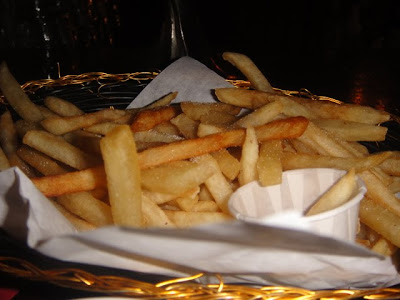 The side of fries was also nothing special, they tasted like frozen store bought fries.

After our disappointing bite, we walked down the hall to Varnish. 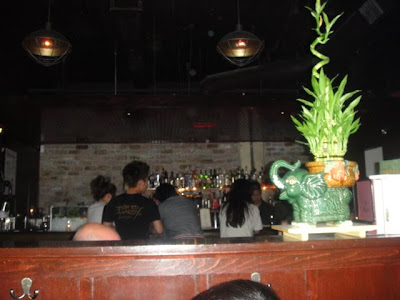 It was definitely dark inside, with brick walls, book cases, velvet wallpaper, wood paneling and wood benches. It was more spacious than I had expected- I thought it would be the size of a broom closet. 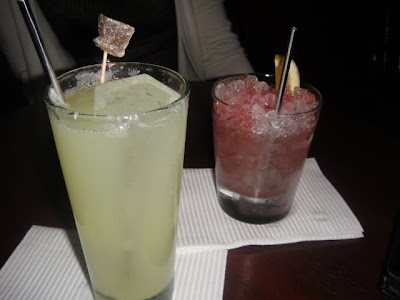 We had to get a move on after our one drink because we wanted to check out new bar Villains Tavern, and it was already approaching my weeknight curfew. 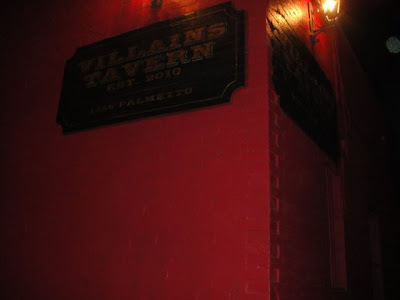 Villains Tavern is brought to you by the owners of Eastside favorites 4100 and Bordello Bar. It's located in the middle of nowhere, in the Arts District by Little Tokyo. We thought the navigation system had misdirected us when we pulled up to a dark street in a somewhat industrial-looking neighborhood lined with warehouses. 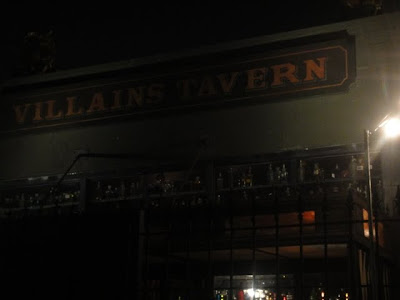 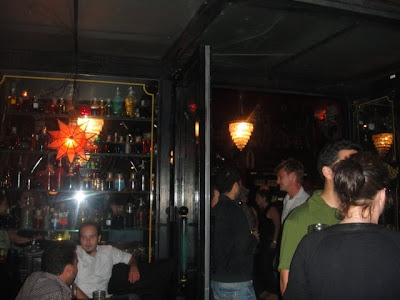 Once inside, you felt transported into the old days. Bartenders were dressed sharply, walls were painted in a deep red color, decor was gothic and it was requisite dark inside. 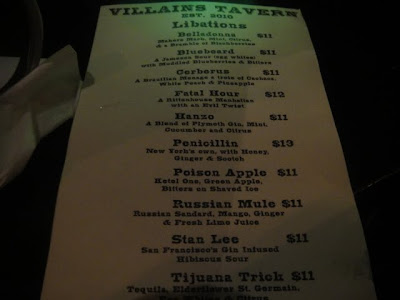 They have an upstairs VIP balcony area. 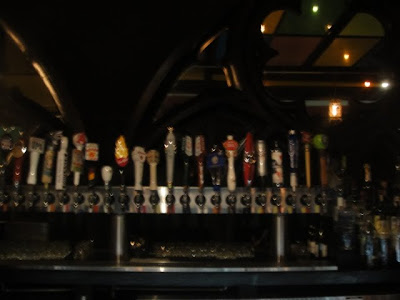 The outside bar is where you can purchase from their selection of 20 artisan beers. 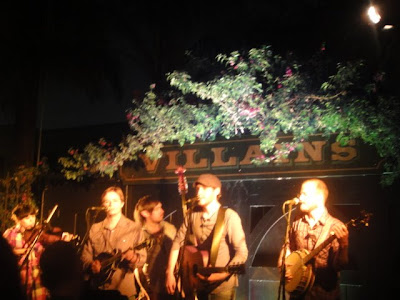 There are communal tables and a stage where a band played live folk music. Besides beer, you can also order a jar of beer and a shot for $8. There will definitely be a lot of people that will get trashed here...

Villains is known for their cocktails, which BTW you have to order from the inside bar. I ordered the Russian Mule (Vodka, mango, ginger, fresh lime juice) from the bartender who was obviously more interested in socializing with other customers. While busy chatting up with some annoying girl beside me, a lady bartender asked if I'd been helped. I said "I think he is, but I've been waiting for a while". She said "Ok, he'll take care of you". I understand. She didn't want to steal someone else's business. But I saw her mixing up drinks for another 2 customers while I was still waiting for mine. After about 15 minutes, my bartender started to prepare some Russian Mules. I was elated and parched. But when he handed the drinks off to two of buddies, I was livid. I said to him "Err... I ordered a drink too" and he asked me what I got. ANGER! After I repeated my drinks again, he prepared it. I was visibly pissed, rolled eyes and everything. I mean, I was standing right in front of him the whole time, the only person around was that annoying girl he was chatting with. He asked me to taste the drink and I said "It's fine, I don't care". Yeah I can be bitchy. I threw down a $20, he said it was on the house. I tipped him, don't worry. At least I got a free drink, but it did take me 20 minutes, and it wasn't even crowded as evidenced by the lady bartender serving up 4-5 people during the duration that I was waiting. 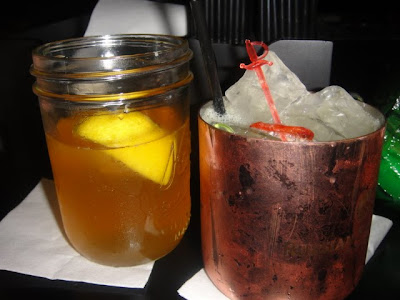 Beers are served in mason jars and the moscow mule was served in a tin cup. Nice touch.

Apart from the long wait, I did enjoy my time at Villains. Unfortunately the kitchen had closed right when we got there. I actually preferred the setup of Villains Tavern over The Varnish Bar. I appreciate the outside patio and live music of the former. The cocktail and beer selection was also wider.

Too bad about the Cole's dip :(. I had one a few months ago and thought it was good, though I have yet to try the one at Bandera (also hear Westside Tavern makes a killer French dip). And Villain's Tavern is on my hit list.

Lol - we went to Coles and Varnish a few weeks back to, and Albert thought the French Dip was nothing special. Phillipes is WAY better.

the varnish is funny. they (i'm sure other bars do that) make people wait outside to form a line when there's nothing but a bloke or two and a fly inside. i was the fly inside with the few blokes.

villian sounds fun but that bartender sounds like an assssssssssssss.

Daniel - You gotta give Bandera a shot. Try their beef ribs too

Betty - gotta try Philippes then. My sis just went and she liked it

Anna - wasn't that drink at Villians delicious? I've been on a Russian/Moscow mule rampage lately, I've noticed they are served quite commonly

bagnatic - thankfully there wasn't a line at Varnish when I went, cuz I would not wait in line if there were one. Yeah.. lots of hwood clubs do that wait-in-line-when-theres-noone-inside. That's why i stay clear from those places..

Bummer about your Cole's experience! I ordered the lamb French dip and added goat cheese and really enjoyed it! If you like lamb, it's worth another visit :)

Also, their bar is pretty impressive. As weird as it sounds, one of the best margaritas I've had was at Cole's!