Cafe Bizou is an American French restaurant with locations in Sherman Oaks, Santa Monica and Pasadena. My family likes to dine there because the food's decent (love their lobster bisque), they have a low corkage and the prices are reasonable. 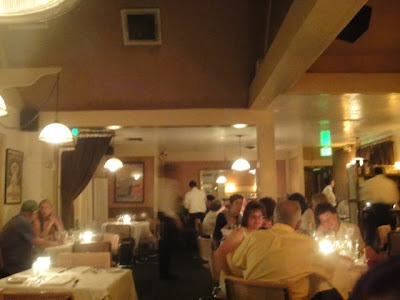 This place is always packed no matter what day of the week. The clientele leans toward older people and couples on a date. The menu is French bistro so you'll find steak au poivre and duck, but also American staples such as pastas and fish. My favorite dishes are the french onion soup, lobster bisque, lobster pasta and rack of lamb. 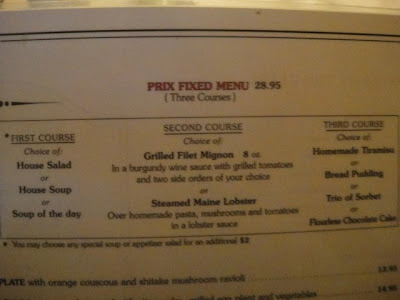 Besides their regular ala carte menu, Cafe Bizou offers a three course prix fixe menu for $29.95. That's a pretty good deal considering the entree options are not crappy (filet mignon or lobster pasta). 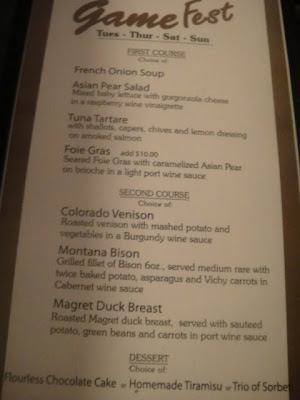 Currently, they are also offering a seasonal prix fixe game menu. Interesting that they are offering it in the summer instead of the fall. But the meat options are pretty unique. I mean, how often do you get to eat bison, and at such an affordable price? 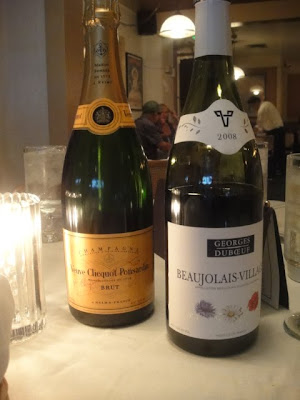 Cafe Bizou has a nominal corkage fee of $2. Great for a family of drinkers. We brought a bottle of Veuve and a Beaujolais. 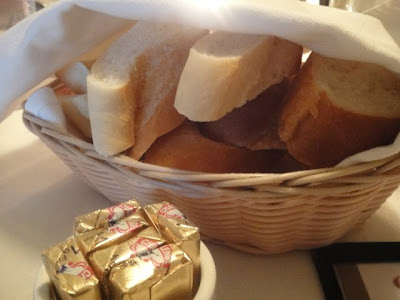 Their bread looks ordinary but it was actually pretty good. It was light and fluffy in the center. 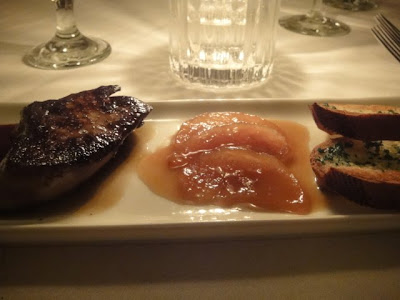 Seared Foie Gras with caramelized asian pear on brioche in a light port wine sauce
Additional $10 on the prix fixe. The foie was delicious with a nice sear. The foie paired really well with the sweetness from the pear. I really enjoyed the butter toasted brioche as well. 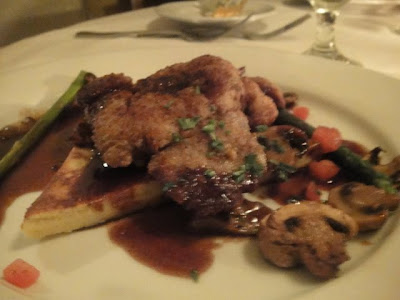 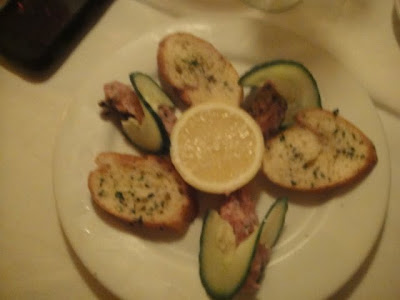 Tuna tartare with shallots, capers, chives and lemon dressing on smoked salmon
The tuna was fresh and was served with a crunchy toast, however it tasted more like sushi than a tartare. Somehow, the other components such as the capers and chives did not seem to be integrated with the tuna. Additionally, you expect a plate with the tartare as the centerpiece, but instead the tuna portions were small and you could barely see them on the plate where they took their place under slices of cucumber. 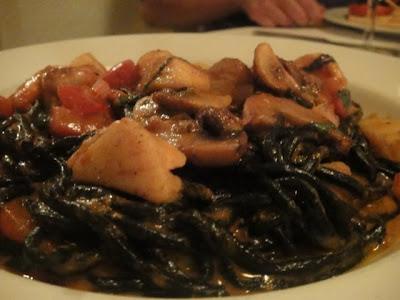 Shrimp and sea scallops with black tagallini pasta, mushrooms and tomatoes in lobster sauce
I've had this dish before and enjoyed it, however this instance, the dish was disappointing. There were many misses with the pasta dish. The sauce was not flavorful and the seafood was overcooked. The shrimp was rubbery and the scallops were dry. The half tomato was also undercooked and had a raw flavor. 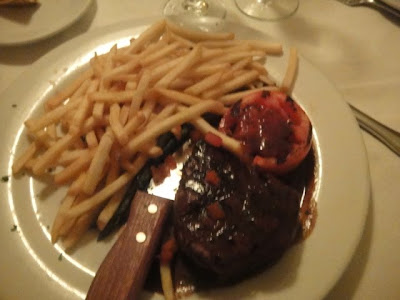 Steak Frites with grilled tomatoes, asparagus, french fries in a burgundy wine sauce
The piece of steak was cooked perfectly and soft in the center. Quite a feat considering it was a thick cut. The fries were also very tasty. 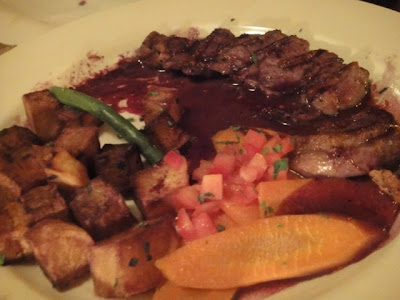 Roasted Magret duck breast with sauteed potato, green beans and carrots in a port wine sauce
The pieces of duck looked so measly. In fact, all the sides were enormous compared to the meat. I did enjoy the potatoes which had a crunchy exterior but fluffy inside. 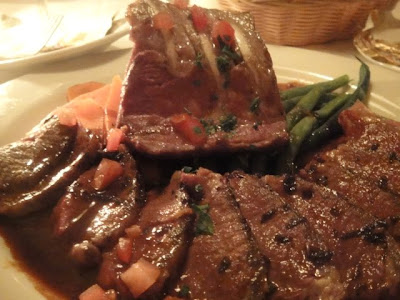 Rack of lamb with gratin potatoes and green beans in a minted lamb sauce
This is a crazy good deal, just look at the generous portion of lamb chop and meat. The lamb was cooked to medium rare so the pieces of meat were pink in the center, however the part around the bone probably could have been cooked a little longer because it was all grissly and was hard to get the meat off the bone. The potato gratin was buttery and rich. 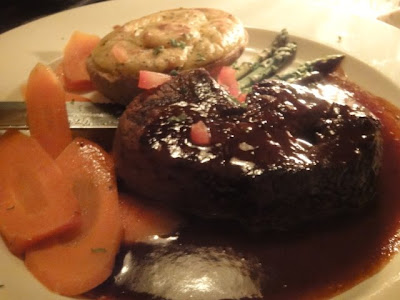 Grilled Montane Bison served with twice baked potato, asparagus and Vichy carrots in a Cabernet wine sauce
The bison itself was very juicy. I appreciated the thickness of the cut, unlike some of the other dishes where the meat was served in thin slices. The potato was creamy and cheesy which was a bit too heavy for me. 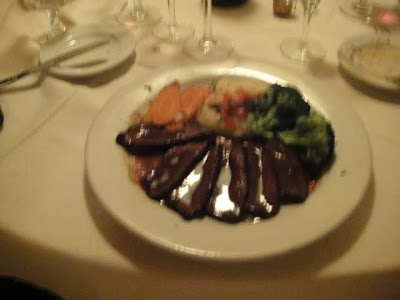 Colorado roasted venison with mashed potatoes and vegetables in a Burgundy wine sauce
The venison was tender and sliced thin. Burgundy sauces are usually thick and concentrated with wine flavors, but the sauce here was weak. You didn't get that intense flavor that comes from a wine reduction. 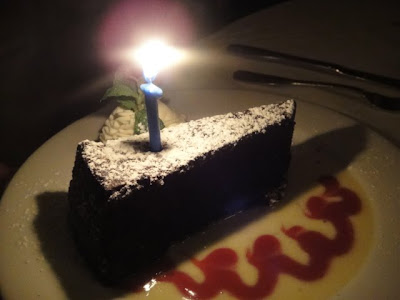 It was my sister's birthday so they brought around a slice of flourless chocolate cake. The cake was semi-moist inside but somehow it left a dry aftertaste in your mouth. 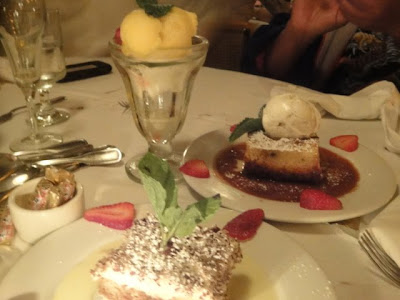 Our other selection of desserts were the tiramisu, bread pudding and a trio of sorbet. All good desserts but the bread pudding was outstanding. It had a nice spongy interior with a caramelized exterior. The pudding itself was warm but was topped with cold vanilla bean ice cream.

I was pretty impressed with the execution of the meats. They were all cooked well. Unfortunately, there were some issues with overcooked shellfish and sweetbreads. In addition, the dishes all lacked a bit of seasoning. You didn't walk away thinking.. Wow, that was a flavorful dish. The service was definitely lacking. It took over 15 minutes before our waitress came by to take our orders, and we had to wait over 20 minutes before they brought by an ice bucket for our champagne. Water glasses were left empty and they never cleared the appetizer plates even when the entree was served. But I do have to say that they offer really good deals. You can't beat a three course dinner for less than $30. And $2 corkage? This is a perfect place for a date. I guess that's pretty obvious from all the couples dining there.

wow, you just reminded me of a few memories i had there.....