Suzanne's Cuisine, Ojai - where desserts are sooo much more fun than a stripper 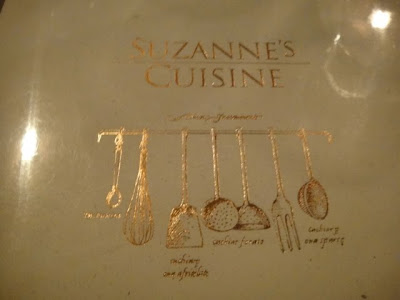 The highlight of my friend Betty's bachelorette party night in Ojai was our big dinner. In all honesty, I think a girls wine and dinner weekend is the best way to celebrate one's hen night. We're no spring chickens anymore. We were never into bottle service at a Hollywood club. And we'd rather dodge than watch strippers in action. So Ojai was the perfect setting. There's aren't too many great dining options but Suzanne's Cuisine seemed to be every one's favorite based on online reviews. It's a mother-and-daughter run restaurant, but don't be fooled. It's not a small time shop. The decor is sophisticated, the food is good and the service is attentive. For a small town, that is.. 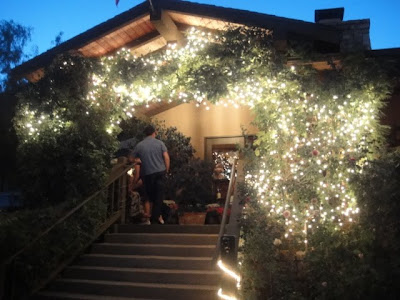 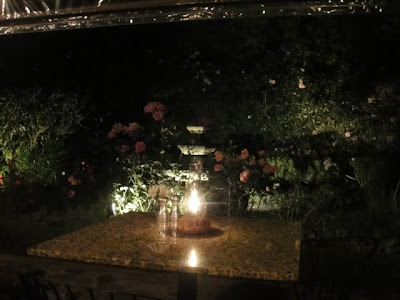 We were seated in their enchanting outdoor patio that was well lit and decorated with gorgeous flowers and a warm fireplace. It's really a romantic setting which is a perfect date place. 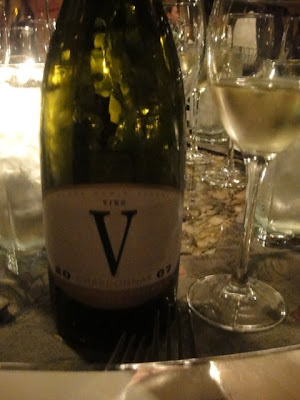 When we got to the table, the manager explained that Betty's friends and bridesmaid who couldn't make it that weekend, had gifted her with bottles of wine and a gift certificate. I thought that was a very thoughtful gesture. Our first bottle was a Vino Chardonnay from Solomon Hills. I don't usually like Californian chardonnays but this didn't taste oaky and had a crisp apple flavor. 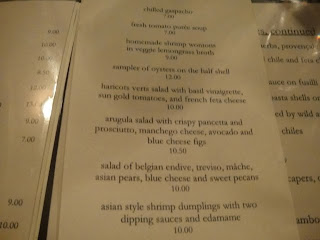 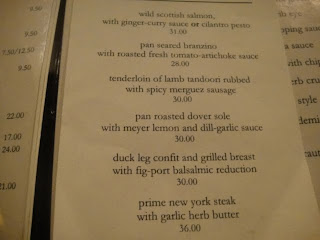 The menu leans towards California fare with European influences, and includes an extensive variety of salads, pastas, fish and meats. They also offer some daily specials. 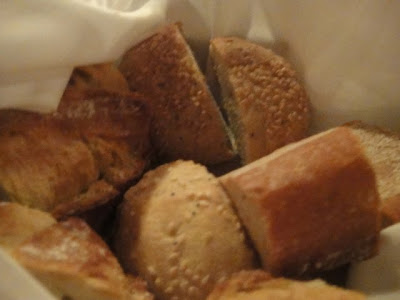 Their bread was fresh out of the oven and pretty darn good. They offered olive, baguette and a sesame seed roll. I'm not lying.. I had about 6 pieces of bread. 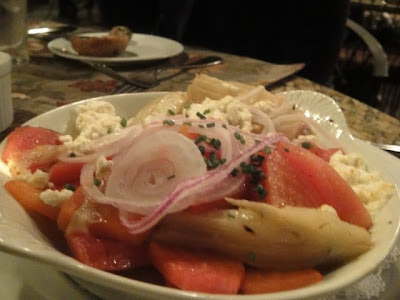 Roasted beets with grilled fennel, red onions and French feta cheese
The beets were orange in color so initially I thought they had dropped off a tomato salad instead of beets. I love fresh vegetables sourced locally, and you can tell the good quality of the produce that Suzanne's uses. The sweet beets were paired with a tangy feta cheese and sharp fennel. 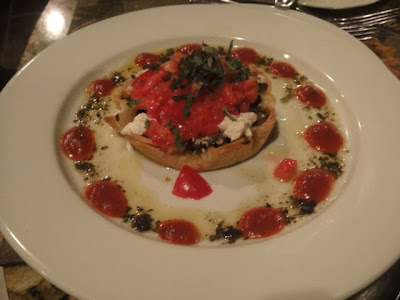 Roasted eggplant tart with goat cheese and tomatoes
Apparently this was a favorite at the table. I passed on the goat cheese. The crust was buttery crust, and once again, the kitchen utilized fresh and vibrant tomato and basil. 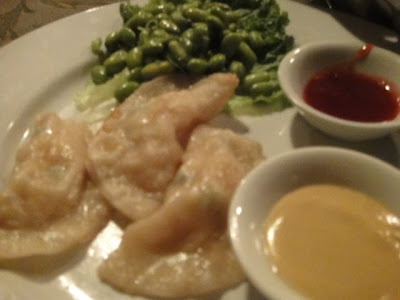 Asian style shrimp dumplings with two dipping sauces
The shrimp dumplings were good, for Ojai. Of course they can't compete with the Chinese restaurants in Alhambra and Chinatown. Everyone agreed that the spicy mustard sauce made the dish. I didn't try. I also don't like mustard. 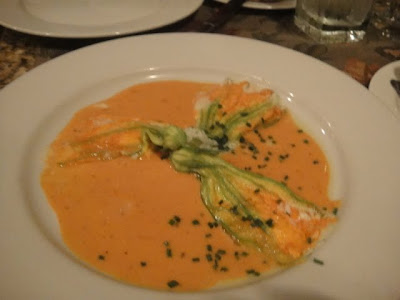 Squash blossoms with goat cheese in a tomato sauce
Yet something that I didn't try, because of the goat cheese. Damn. I'm a useless food blogger. This appetizer wasn't anything specially because the squash blossom wasn't fried so it was rather mushy. Also, apparently the goat cheese was scarce. I guess in that case, I could have eaten this dish. 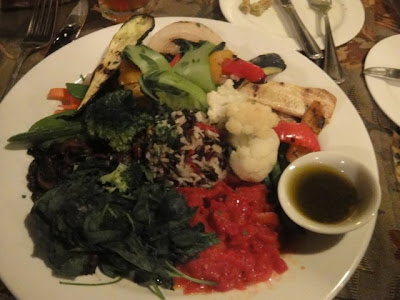 Assorted mixed and grilled vegetables with wild and brown rice
The portion was pretty generous. Normally, I scoff at vegetable dishes but this had a nice variety of vegetables and you know they probably source them from their local farmers. 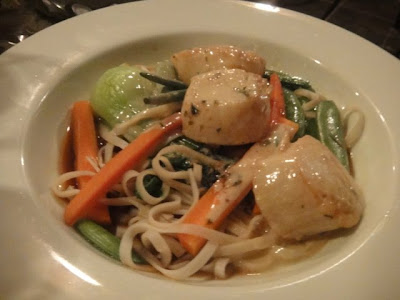 Garlic seared jumbo scallops, thai style with coconut green curry and rice noodles
The scallops were cooked well but the sauce was a bit of a disappointment. It wasn't bad per se, but it was described as being a curry sauce whereas it tasted more like peanut butter. There was no hint of green curry in the dish. Also, Thai food is supposed to have strong flavors. This definitely tasted very washed down. 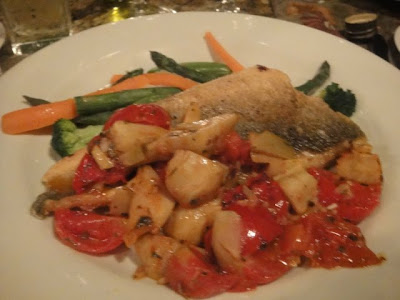 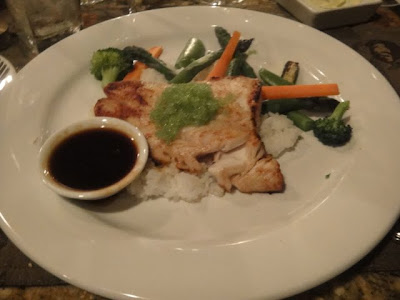 Miso marinated butterfish with a citrus ponzu sauce
Another example of a misrepresented sauce. The fish was supposed to be served with citrus ponzu but the sauce tasted like hoisin. Maybe the residents of Ojai might not be exposed to much Asian sauces so they might not have noticed.. but we are from LA and I'm Chinese. You can't trick us. Apart from that, the fish was cooked well. 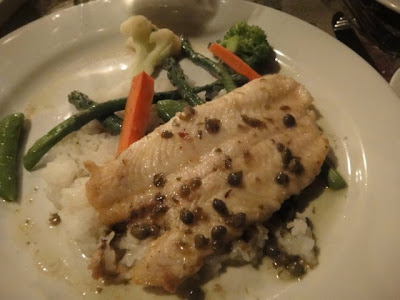 Pan roasted dover sole with myer lemon and dill-garlic sauce
The fish itself was flaky but the sauce needed more flavor. It was rather lame and definitely was lacking in salt. Maybe people in Ojai prefer their food on the bland side? I don't know. 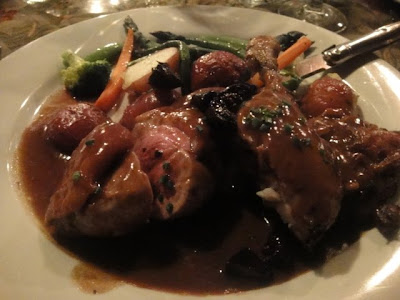 Duck leg confit and grilled breast with fig-port balsamic reduction
So yeah.. while everyone else got veggies and fish, I of course had to get a hunk of meat. I'm not being biased, but I think my dish was the best of the lot. The duck was cooked perfectly. The breast was tender and easy to slice through. I was really surprised with the size of the dish too. I love figs so I was a bit disappointed with the sauce because the figs they used were dried and reconstituted. You would think with all the other fresh produce served in the other dishes, that they could have used fresh figs in the sauce.

Last but not least.. the desserts. 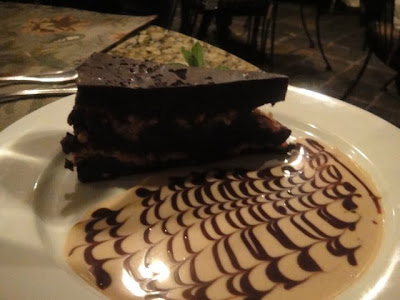 Chocolate peanut butter flourless cake with peanut sauce
This was like a Reese's version of a cake. Decadent and very satisfying. There were 6 forks going at the plate. This poor cake and even the sauce didn't have a chance. 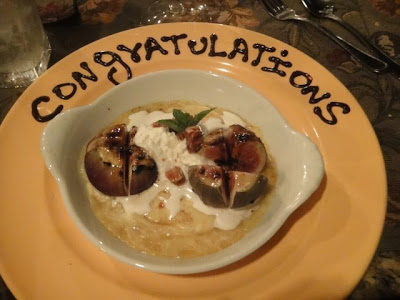 Fig sauce with custard
OMG. Love this! I usually prefer cakes over a fruit dessert, but this was the perfect end to the meal. The fresh figs were plump and juicy. I haven't had such delicious figs before. Interesting that they had access to fresh figs here but didn't use it in the duck sauce. The custard sauce was a bit tart and mild. Such a simple dessert but so fresh and light.

To be honest with you, there aren't that many stellar dining options in town. When we did our research, only a handful of places popped up consistently. Yes, you can't compare the meals here to some of the excellent restaurants in Los Angeles.. but bear in mind, this is a small town. And Suzanne's does really well for a small town. The setting is gorgeous, the service was friendly and attentive, and the portions were generous. The execution of the entrees was fine, but they were weak in the sauce department with sauces that weren't flavorful or that were listed on the menu as something different. They did hit it out of the ballpark with their appetizers and desserts. I definitely would take that fig dessert over a stripper in Vegas any day.

Way better than strippers, but wait, what's this about you not likeing goat cheese?!