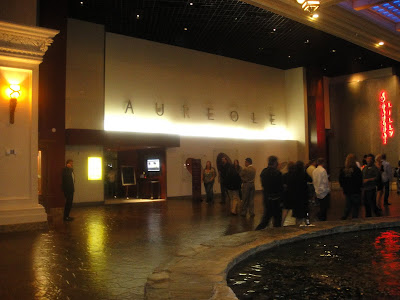 Since we had dinner reservations at Joel Robuchon the next night, we were looking for a good, light and somewhat casual dinner for our first night in Vegas. I was very tempted by the affordable Taste of Wynn prix fixe special menus but decided it was a bit unnecessary to chow on a three course meal the night before a 16-course meal. After searching online for small-plates options, Aureole popped up. I have to admit, I don't know much about chef Charlie Palmer. I know he's earned numerous awards and accolades for his restaurant Auerole that originated in NY. I also know that BravoTV's Top Chef's Voltaggio brothers trained under him. Aureole NY has earned a Michelin star the past couple years, and the Las Vegas venue held a star as well until 2010 when the Michelin Guide stopped awarding stars to Los Angeles and Vegas restaurants. Recession, they say. Apparently it's only temporary which I hope is the case because LA and Vegas have some pretty exceptional restaurants that deserve the recognition.

Aureole is located at the Mandalay Bay. They have a formal dining room, a bar area and the coveted swan court that overlooks the pool and fountain. 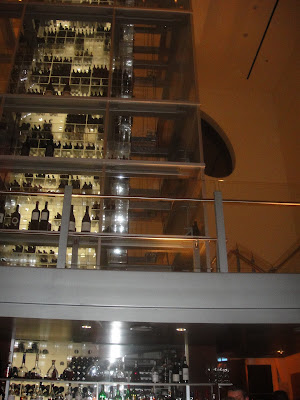 They are known for their 42 foot high wine tower that holds about 10,000 bottles where "wine angels" have to rappel up to to grab the wine. The tower must house very expensive bottles of wine because I only saw her fly up once. 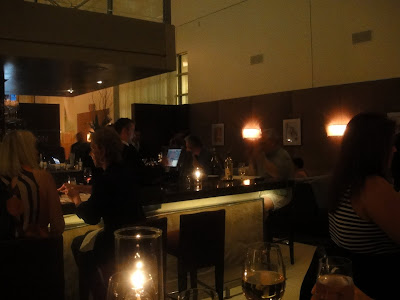 We grabbed a table at the bar and must have just beat the wave because just five minutes later, the bar area filled up just past 8pm. It pays to be the early bird or not have a gambling habit. 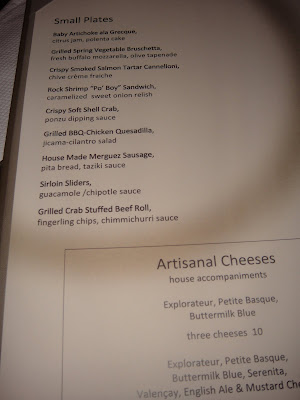 The small-plates menu had less than ten items and some cheese offerings. You are also able to order from the dinner menu at the bar. 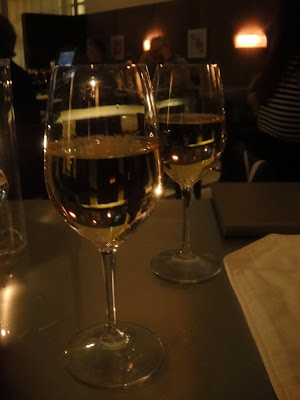 Even though they had a tempting selection of cocktails, we opted for wine which was surprisingly rather affordable for a high-end restaurant. 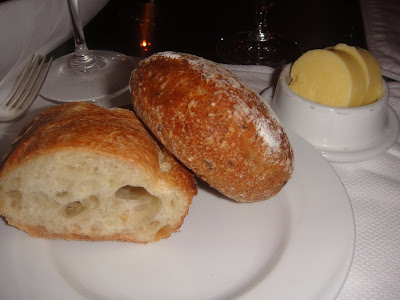 Bread was served. Nothing special. I was eyeing the pretzel bread that my neighbor received and I was envious. 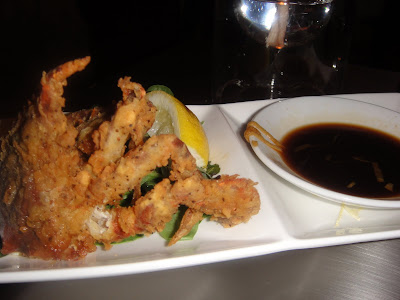 Crispy Soft Shell Crab with ponzu dipping sauce
This photo was actually taken after I ate a piece of crab, so in fact the serving was much larger. These were rather large-mutant pieces of crab. It had a nice crunchy breading that was seasoned well. The ponzu went well with the crispy crab. 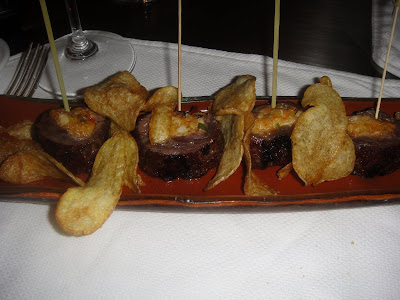 Grilled crab stuffed beef roll with fingerling potatoes and chimmichurri sauce
The beef was a teeny tiny bit tougher than what I had hoped but it might have been necessary to hold the crab together. The home made potato chips were good. A little oily, crispy and seasoned with a little salt. Wish they could package these suckers because I would definitely purchase them. 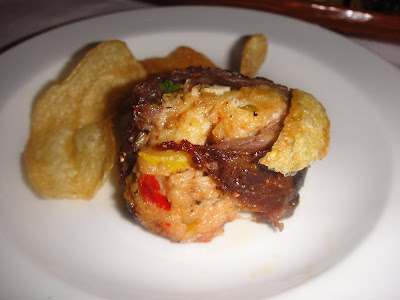 Each bite consisted of a healthy serving of fresh lump crab with no fillers and instead was seasoned with spices and bell peppers. The crab itself tasted fresh and did not have an ounce of a fishy taste. 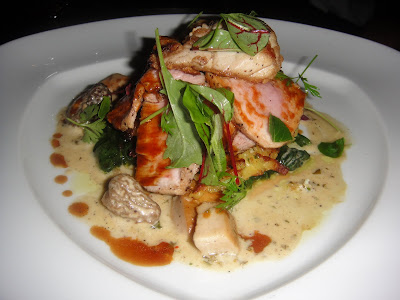 Duo of veal loin and crispy sweetbreads with potato latke, mushroom ala creme, bloomsdale radish
This was from the dinner menu and not cheap at $42, but if you're splitting it, it doesn't hurt as much. The pieces of veal were a bit inconsistent, some were tougher while others were tender. But I'm willing to dismiss this because the sweetbreads made up for it. They were luscious, lightly breaded pieces of veal thymus gland. You know some sweetbreads really taste like thymus glands. Not this one. These were well executed, supple and did not taste a bit chalky. I enjoyed the sauce which was flavorful. The latkes were also delicious and reminded me of hash browns. 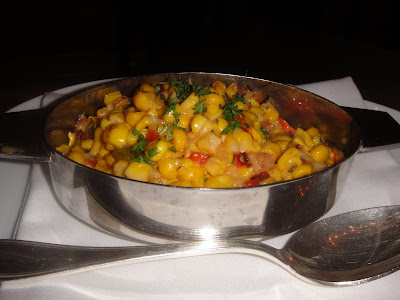 Side of sweet corn and bacon succotash
I am soooo glad I looked at the side dishes and ordered this. Usually I ignore my poor veggies but if it's married with bacon, it definitely deserved a second look. It's the kind of thing that I could eat all day. Mostly cause its DROWNED in butter! The dish had a nice balance of sweetness from the corn and saltiness from the bacon. The dressing was citrus which really freshened up the flavors.

I'm actually glad we opted for the bar area. It wasn't formal and you wouldn't feel guilty for sharing dishes. Eating at the bar also allows you the opportunity to sample dishes at a lower price point and also make it a lighter meal. Service was great, the manager came by to check on us and he also beckoned a younger waiter to assist us when we were asking for bar recommendations. I enjoyed our meal and thought the food was flavorful. Prices were also reasonable for a fancy award winning restaurant. The dinner menu was pricier but the items on the small-plates bar menu were priced in the low teens. In fact, this meal came up to the same price as our brunch at Bouchon and I can say with certainty that the food at Aureole was miles ahead. Yes I know they are completely different animals: different cuisine, different meal services, but it's amazing how the same $ can get you something much more memorable and satisfying at Aureole. Perhaps I was paying for the Keller name at Bouchon. At Aureole, it seems I was paying for the food and service.

That duo of veal loin and sweetbreads looks so good! Sitting at the bar definitely has its advantages--better food values, open seating, and less stuffy. And I agree about the Michelin stars; I hope they bring them back to LA and Las Vegas.

Daniel- yes, it was definitely less formal which was nice. It's also more fun for people watching ;-)