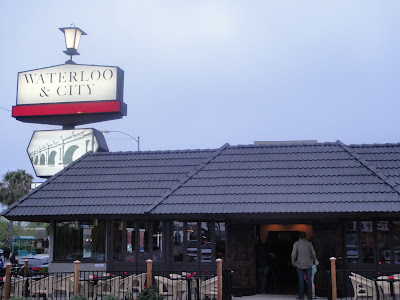 I was excited to hear about new bar Waterloo & City opening up in Culver City. I was also excited to hear that it would be a London inspired gastropub- London is my favorite city in the world. I was even more excited to hear that Thierry Perez of Fraiche was involved. However the restaurant encountered some setbacks along the way. W&C was supposed to open Dec 09-Jan 2010 but months passed and still no opening. Next, Perez dropped out. Eaterla just reported that Perez is planning to open up L'Epicerie in Culver City.

Waterloo & City is named after a london tube station. Co-owner and executive chef at helm is Brendan Collins who has worked at two Michelin Starred Melisse, Hollywood French brasserie Palihouse and helped open Alain Giraud's Anisette in Santa Monica. Collins is a Brit so you can expect a menu that is influenced by both English and French cuisines. The other owner and General Manager is Caroloz Tomazos who has had exceptional management experience at three Michelin Starred Per Se and Le Bernardin. With such strong resumes, there's a lot of buzz for the restaurant.

Just this week, Waterloo & City finally opened its doors. I was hoping that the obstacles they've faced was not indicative of problems to come. Thankfully, W&C was everything that I've hoped for. A refined yet casual Westside bar offering an accomplished menu, good alcohol offering and exceptional service. The restaurant took over the space of greasy spoon diner Crest House and is located in Culver City, further west from the high-restaurant-populated part of Culver City. It's actually an area that is slowly gaining a bar scene with neighboring Kogi-brick-and-mortar Alibi Room and Bigfoot West. 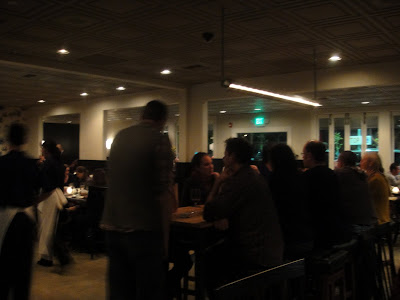 The decor is kind of a mix between a trendy New York bar and a modern French brasserie. The space is filled with dark, slim wooden chairs and tables, wide wraparound windows and red lacquered banquettes. There is also a communal table in the center of the restaurant that adds to the casual dining experience. The place was lively and bustling, and pretty crowded with every table filled on a Friday night. Music selection was awesome from indie band Vampire Weekend to oldie but goodie Heart. 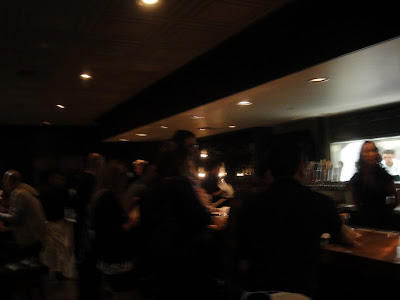 They have a bar overlooking the open kitchen and an area with high tables and stools. 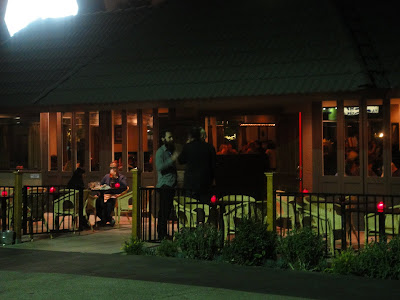 They also have an outside patio which is perfect for a nice warm day. 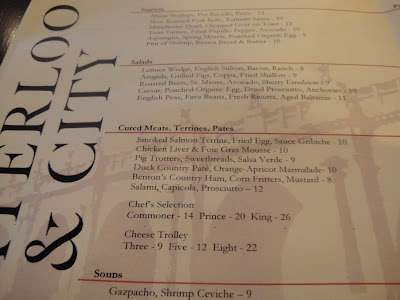 The menu is a mix of pub food, California concept of fresh ingredients and because Collins has worked at numerous French restaurants, the menu also leans towards French cuisine and technique. There is a nice selection of starters, salads, charcuterie and cheese plates, pastas, pizzas, entrees and sides. There are also a couple offal items on the menu. Now that's my kind of place. It might seem like an ambitious menu but it all seems to flow together. Basically it's upscale yet casual dining.

When I am trying out a menu for the 1st time, I like to sample as many dishes as possible. Since it was just the two of us, I felt it best that we ordered multiple smaller dishes to share in lieu of a large entree each. 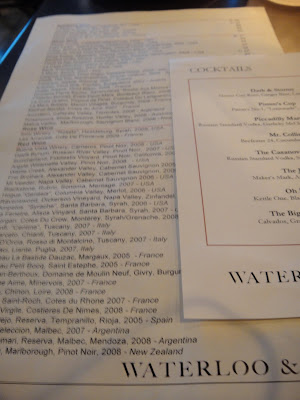 W&C also offers a good sized wine and beer menu. There are about 60 bottles of wine, about 12 by the glass, 10 beers on tap and over 20 on bottle including those from the States (Allagash, Stone Brewery), England (Samuel Smith), Germany and Belgium (La Chouffe, Duvel). There is also a selection of cocktails including Dark & Stormy, Pimm's Cup and Oh Rickey! (a vodka, blackberry, lime and soda drink). 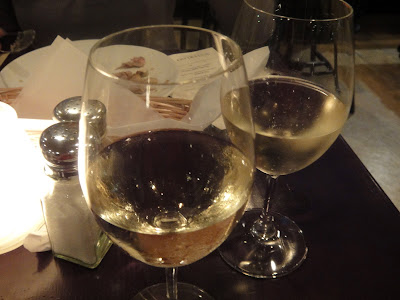 Wine by the glass was reasonably priced at about $7. A glass of Prosecco and a Bordeaux Blanc Chateau Bonnet. I liked that our waitress presented the bottles and poured the wine table side. 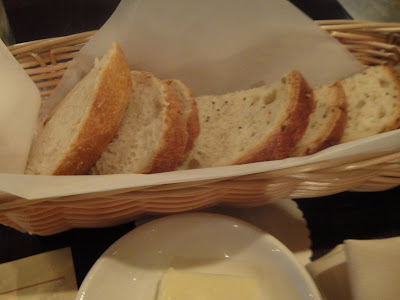 Bread basket was surprisingly amazing for a "bar". There was a warm garlic bread that wasn't too garlicky, and a 7-grain bread with sunflower and poppy seeds. 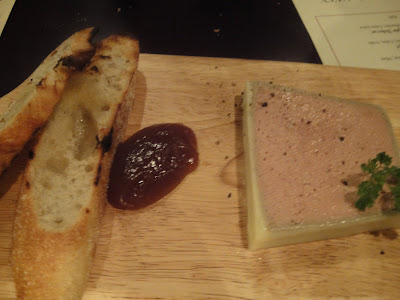 Chicken liver and foie gras mousse was rich, velvety and absolutely decadent. The mousse was paired well with a sweet potato jam. If you like pate, this will not disappoint. 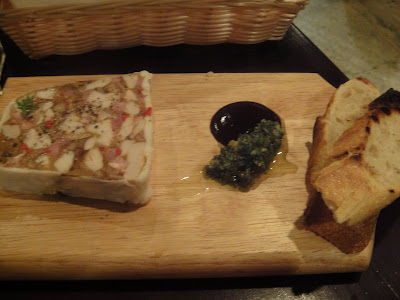 Pig trotters, sweetbreads and salsa verde.
Somehow this dish was not what I had expected. It was under the cured meats, terrine and pate section of the menu but somehow I thought the trotters and sweetbreads would be more prominent on the plate instead of being combined in a terrine. I was hoping for a piece of sweetbread and perhaps trotters that was breaded or braised. This tasted like regular head cheese and I couldn't really taste the sweetbreads. Perhaps I was expecting more distinct offal flavors so I was slightly disappointed. 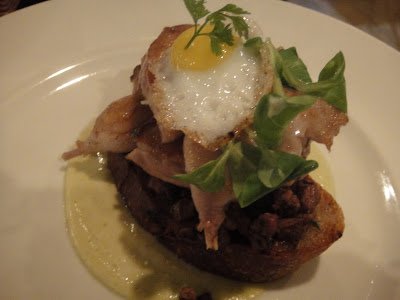 Manchester Quail and chopped liver on toast
This dish is all about indulgence and was by far the best dish of the night. The liver was rich, the quail was seasoned well and cooked perfectly. The meat wasn't dry and the skin was supple. The liver toast sat on a flavorful, creamy sauce made with tarragon, onions and balsamic. To elevate the plate another notch, the plate was topped with a fried quail egg. All the flavors worked well together and the dish was sizable enough to be shared. 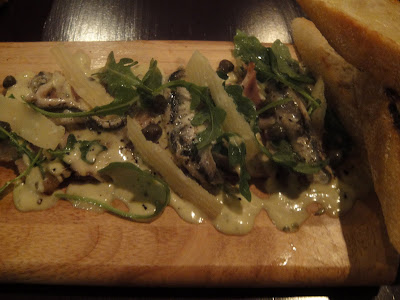 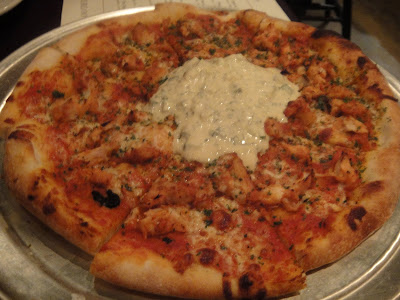 Murgh Makhni Pizza with Greek yogurt and cucumber
Some might wonder why Indian food popped up in the British-French menu but Indian food is a large part of the English cuisine that resulted from the British Raj. $12 for this large pizza and we even had a couple slices left over. Murgh makhni is an Indian dish of butter chicken. The marinade is thicker than normal curry sauce and is yogurt and tomato based. We got this light on mozzarella cheese. The pieces of chicken were tender and the makhni flavors were delicious. If you are afraid of spice, don't worry because the curry was mild. I love Indian food so I liked that they combined curry with the American staple bar food.

Waterloo & City is casual enough but yet service was like what you would expect from a fine dining establishment. It was friendly and attentive; waitresses, managers and bus boys all came by to check on us on a few occasions. Our waitress was knowledgeable and knew the ingredients that weren't listed on the menu. If she wasn't 100% certain, she checked with the kitchen and reported back. Water glasses were always full and they changed plates and utensils as they got dirty. Prices were reasonable for the quality of food and execution of dishes. And most importantly, the dishes were interesting and tasty. Waterloo & City really won my heart, and it's not only because it has a piece of London in it.

Great review of their opening week. I'm going there on Thursday and I can't wait to try the chopped liver on toast. The pizzas look interesting too. Glad to see service was sharp despite being opening week for them.

Hmm have never seen yogurt on a pizza before! Looks interesting! I'm normally not a pub-kind of gal, but I may have to break out my inner Londoner. :)

Daniel- The indian pizza was definitely the most unique. If you like stilton, the short rib pizza looked good too.

Diana- You'll have to try the dessert. We were too full but the owner and waitresses swear by the Manchester Tart and Toffee Pudding.