So I have a bone to pick. We signed up for a cooking class at Sur La Table, the topic was Molecular Gastronomy with Marcel Vigneron. Vigneron was the Top Chef finalist in Season Two, worked at Jose Andres' The Bazaar, cooked at Breadbar Hatchi Series and recently opened a restaurant/bar Bar210 in Beverly Hills. As avid Top Chef viewers and huge fans of The Bazaar and Andres, we were stoked! I busted out of work on time, headed straight for Sur La Table at the Original Farmers Market on Fairfax to score front row seats. We're dorks like that. To our disappointment, Marcel was nowhere to be found. Apparently he's now too busy with his new restaurant to lead the cooking class. Not sure why he was still listed as instructor on the class schedule on the Sur La Table website. The least they could have done was to send an email to attendees to let us know and perhaps offer a refund if we decided not to attend. After all, I wouldn't have $89 for just any other chef.

The replacement chef was Whitney Werner who has worked at Diaghilev at the Bel Age Hotel, and is currently executive chef at The Beach Club in Santa Monica. Yeah Diaghilev was critically acclaimed during it's tenure but it ain't Jose Andres. Sigh... 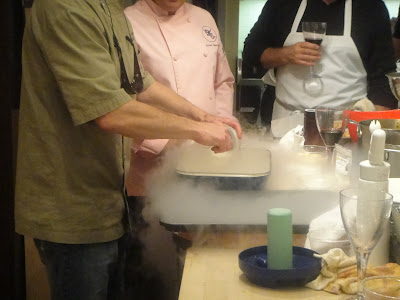 At least he whipped out the liquid nitrogen. Pretty cool. 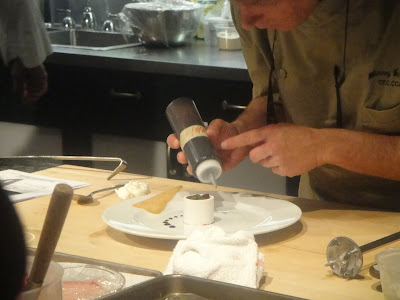 The class started with a demonstration by Chef Werner where he prepped some of the dishes that we were to prepare. After the demonstration, we broke off into teams. Each team was assigned a dish. Ingredients were all laid out on each table. 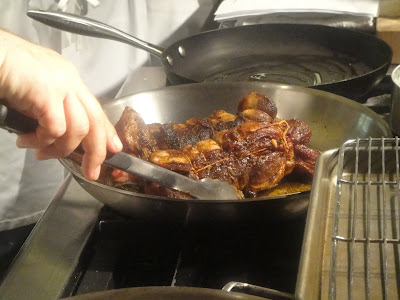 The lamb was browned before it was popped in the oven. It smelt delicious. 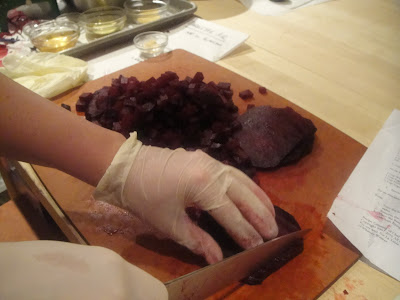 Chopping up lots of beets for the appetizer. 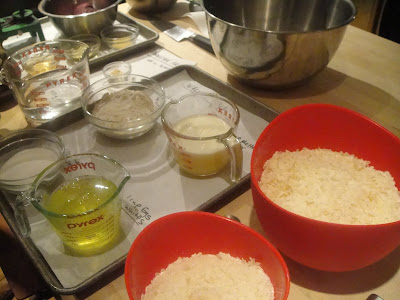 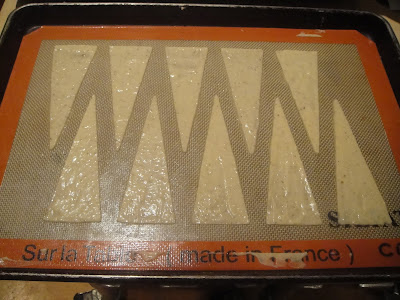 I wasn't feeling too ambitious so I took responsibility of the walnut tuile which involved mixing walnut flour, egg whites, melted butter and sugar, then spreading the mixture in a mold and baking it in the oven.

After all the food was prepared, we all gathered around the table with wine and sampled the final product. 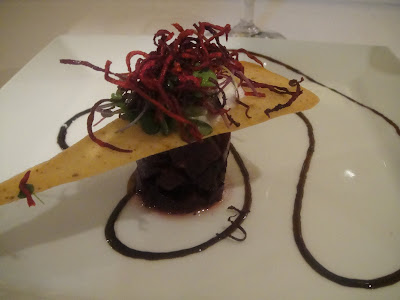 Roasted beets, walnut tuile and Parmesan air.
The beets were marinated in a champagne vinaigrette, then filled in a ramekin to form the timbale. We also got to fry up thin strands of fried beets that was used as a topping on the beets. The plating looked great, I was quite impressed that we actually put this together. It looked restaurant quality. 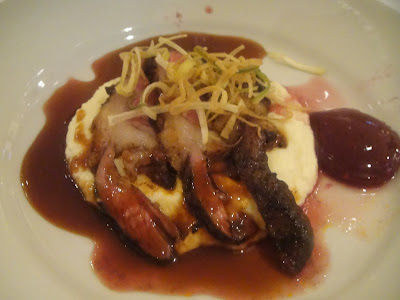 Coffee Rubbed Lamb loin with Rocky Mountain Wildberry Spheres.
The sphere, which was dropped in a water bath, is that little blob to the right of the lamb. It's pretty fragile so you had to handle with care. The lamb was cooked perfectly and drizzled with a rich sauce. The cauliflower and parsnip puree was buttery and delicious. 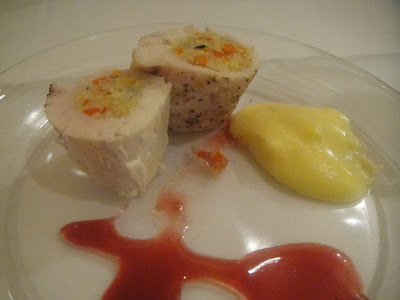 Swordfish with Cous Cous Involtini and Yuzu Foam.
The swordfish was pounded thin between plastic sheets, then filled with cous cous and rolled into a cylinder. It was then cooked in the oven. Xantham gum was used to make the Yuzu foam. Think the team that made this forgot the seasoning because the fish was rather bland.

OK, yeah I started the night a bit disappointed after they did a chef switcheroo on us, but it was still an informative and interesting experience. The lamb was delicious but the fish was tasteless. Would I try any of this at home?!?! Honestly, some of the ingredients involved in Molecular Gastronomy such as Xantham gum, lecite, liquid nitrogen, Methocel etc can be a chore to find, you'll need to go to specialty stores to purchase them. Seeing that I hate driving out of my 5 miles radius, I doubt I'll go hunting for these ingredients so these recipes will probably stay filed up somewhere in storage.

totally!! they are sneaky!!

Sur La Table never informed me that they scheduled me for this class. Yes, it was false advertisement and I apologize for not being there!

Thanks for stopping by, Marcel :) I knew it wasn't your fault. They should have let us know!!