Tuesdays Tasting at The Gorbals 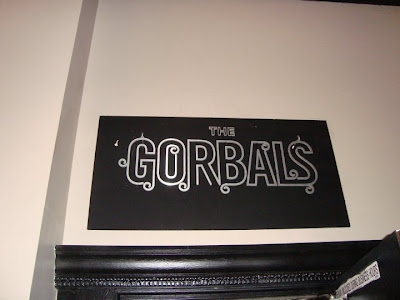 The Gorbals. It's a funny name for a restaurant. Sounds random but it's actually named after the neighborhood in Glasgow where Top Chef Season 2 winner Ilan Hall's parents grew up. The menu is supposedly Jewish/Scottish influenced although the only item that seems to be cultural specific is the bacon wrapped matzo. The Gorbals is located in the Alexandria Hotel in Downtown LA. It's a bit of a sketchy area but thankfully they have validated underground parking. We decided to dine there before a play at the Ahmanson Theatre in downtown, which BTW was a great performance (Albert Hitchcock's The 39 Steps). 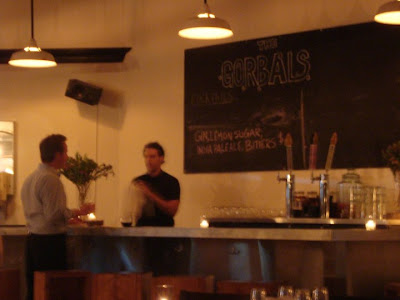 They have a rather minimalistic bar area and the restaurant has a New York industrial feel to it with it's simple wooden communal tables and steel counters. 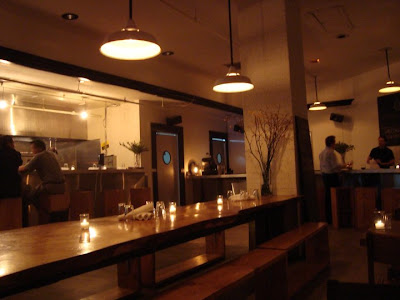 The open kitchen concept gives this place a casual feel. There were some diners that were sitting by the counter overlooking the kitchen. Pretty sweet spot in the restaurant, I'd consider those seats the next time I'm there. I'm loving the vibe, the simple decor and especially the awesome music (they played The XX album on a loop). 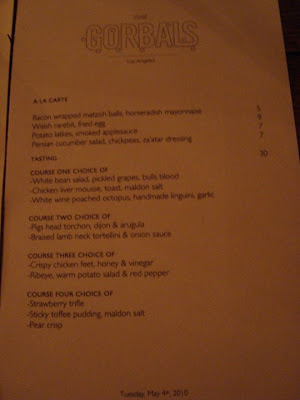 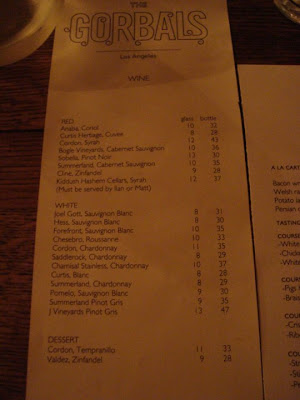 To our pleasant surprise, they offer a Tasting Menu on Tuesdays. At 4 courses for $30, it really makes sense to go with the tasting. Unlike at most fancy restaurants, the whole table does not have to participate in the tasting. Add another $10 and you'll can get the wine pairing as well. You'd be hard pressed to find a better deal like this in LA. The menu is rather limited but even if you order ala carte, you can order anything from the tasting menu for $15-17 per dish. Happy hour runs until 7pm which includes 1/2 off wine.

We decided to order two tasting menus and a couple other dishes to share. 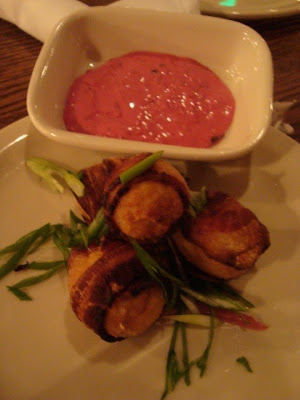 Bacon wrapped matzoh balls with horseradish mayonnaise
This is their signature dish and it is delicious. Anything with bacon usually is! The matzoh was fluffy but not too soggy or broke apart like some matzoh balls tend to be. The bacon was crispy and added saltiness to the matzoh ball. The horseradish mayo was rather mild and tasted a bit like romesco sauce. I liked that the horseradish flavor wasn't strong and pungent. 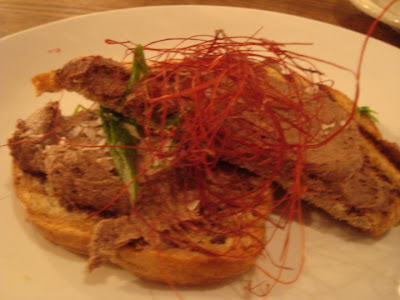 Chicken liver mousse toast with maldon salt
The liver was a sizable portion and was rich and creamy. The liver toast was topped with chili threads which gave a nice bite to the dish. 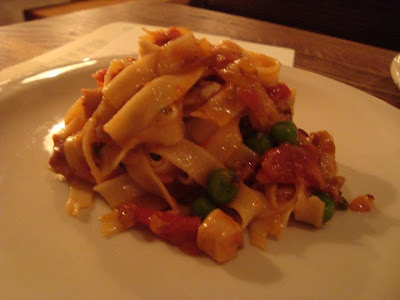 White wine poached octopus, handmade linguine and garlic
Loved the fresh pasta that was cooked perfectly. The octopus wasn't chewy but instead was tender. It was interesting that part of the octopus had the texture and flavor of sardines or mackerel. The octopus had a stewed seafood flavor. 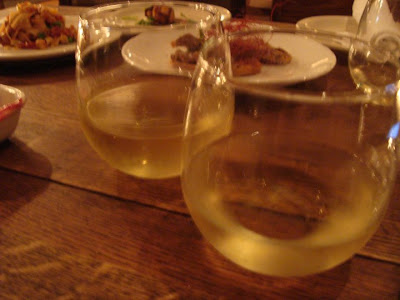 The first courses were paired with Summerland Pinot Gris and Saddlerock Chardonnay. Both crisp and light. Generous pours of wine too! 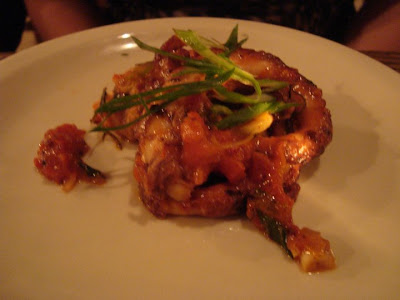 They were rather accommodating when we asked for a low carb option of the octopus dish. The dish was basically a larger serving of octopus in lieu of the pasta. 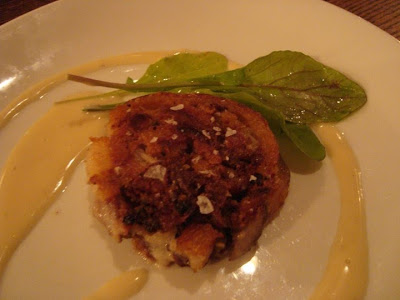 Pigs head torchon with dijon and argula
Paired with Chesebro Roussanne
The pigs head was encapsulated with a crispy coating. When you broke into the torchon, you encountered tender, fatty pieces of pork which tasted as soft as pigs cheek. The dijon was mild and had a mild sweetness. I really enjoyed this dish as it was tender and melt in your mouth. 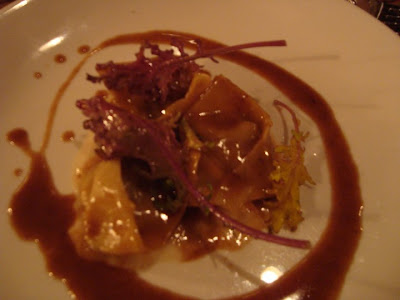 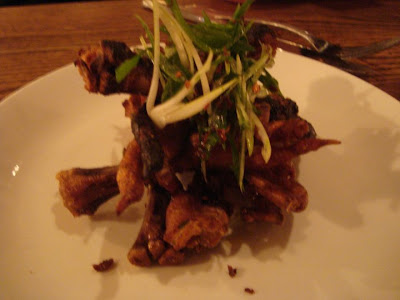 Crispy chicken feet, honey and vinegar
Paired with Pomelo sauvignon Blanc
I liked this version of chicken feet. The dim sum version (which I also love) is stewed and some feel that it can border on being slimy. The Gorbal's take on the chicken feet was fried and crispy, with a delicious glaze. 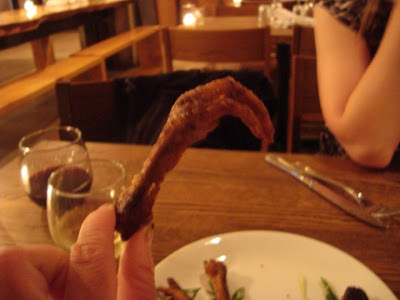 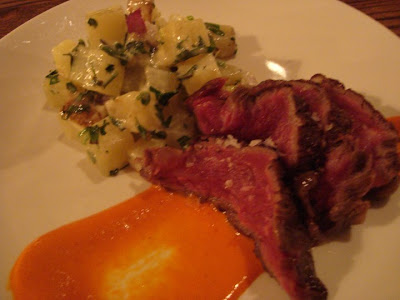 Ribbeye, warm potato salad and red pepper
Paired with Sobella Pinot Noir
The steak was perfectly cooked, borderline rare and was soft and supple. That was one delicious piece of meat and wasn't too heavy like some pieces of steak can be. The potato salad was excellent. It wasn't mayo based and instead was mixed with hollandaise. 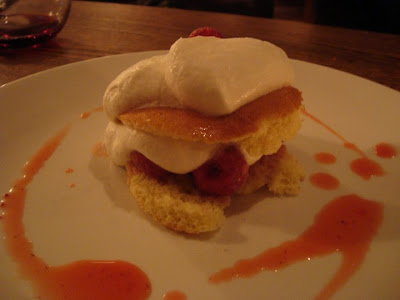 Strawberry trifle
The trifle had some whiskey in it which was rather strong. The whipped cream filling was light and the cake was buttery with a a lemon flavor. 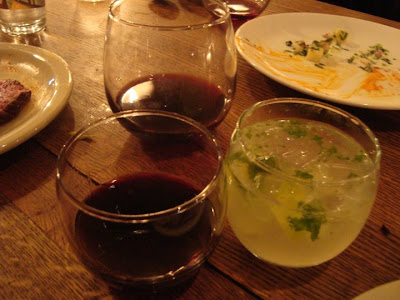 Desserts were paired with a mojito and a Valdez Zinfandel. The mojito had lots of soda in it which lightened it a bit. The Zinfandel was a nice, sweet dessert wine. 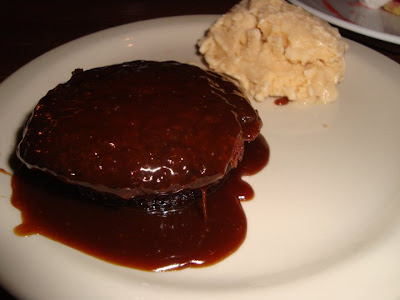 Sticky toffee pudding with maldon salt
What a great end to the meal. The toffee pudding definitely was sticky and additively sweet. The ginger ice cream was mild and was a lightly flavored canvas for the sweet toffee pudding.

The service was excellent. Our waitress was accommodating, knowledgeable and actually seemed excited to be working at the restaurant. When we mentioned that we were headed to a show, she brought by our bill quickly. I enjoyed the food at The Gorbals. I thought the dishes were tasty and were priced well if you decided to partake of the tasting menu with wine pairing. The menu offers a nice variety of dishes that doesn't seem to be fit exactly into any specific cuisine. It's world fare and Ilan Hall does a good job executing it. After all, he is from a Scottish, Israeli, German, Russian heritage.

Wow! I can't believe you get all that food and wine for $40!!! Totally worth checking out on a Tuesday night! Thanks for sharing!

ohhh that looks like a good deal! i am intrigued with the chicken feet especially since i love the dimsum version so much.

Diana - yeah it was a great deal, just sucks thay DT is sooo far away, esp after all that wine

Bagnatic - I liked the chicken feet cuz it was FRIED but i also love the gelatinous dim sum type. hope you;ll enjoy this version as well