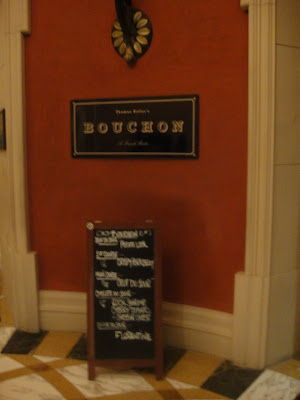 Thomas Keller is arguably the most revered American chef with two Michelin Three Star restaurants: Per Se in NY and The French Laundry in Yountville. Unfortunately after a couple weeks of dialing in for a reservation at TFL, I finally gave up. It is essentially the holy grail of restaurant reservations. Hard to get ahold of a live person and if you are fortunate to do so, reservations are most likely all booked up. Keller also owns Bouchon restaurants and bakeries in NY, Vegas, Napa and Beverly Hills, as well as Ad Hoc Restaurant in Napa. We brunched at Ad Hoc last year and actually walked away unimpressed. Yes, granted we were hungover from the many Irish car bombs we had the night before, but I thought the food was not well executed (bland breakfast dish and overly sweetened dessert). Ad Hoc was a relative FAIL but I had heard really good things about Bouchon. We had tried for reservations when we were in Napa but they were booked up. So we decided to hit up the Bouchon outlet in Vegas. Someone had mentioned that they preferred the brunch over dinner so we decided to go for that. Unfortunately, Bouchon does not take reservations for brunch (only dinner) so we decided to take an early flight out of LA to avoid the lines at the restaurant. We're that hardcore when it comes to food. 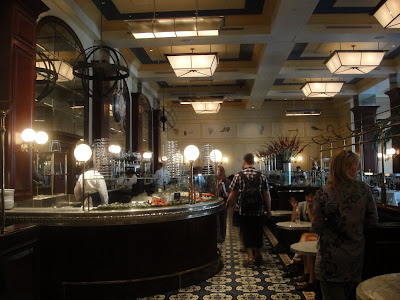 Bouchon is located in the Venetian Hotel. It took us a while to find it because Vegas casinos are mazes, constructed to keep you lost in its premises. After getting poor directions from a very strung out cocktail waitress, we finally found our way to the restaurant. It's pretty nice inside, typical of a very modern brasserie. Reminds me a bit of Anisette in Santa Monica with high ceilings, patterned flooring, mirrored walls and a lovely display at the entrance, showcasing fresh seafood including oysters and langoustines. It's interesting that given their fine reputation for baked good, there wasn't a boulangerie in the restaurant or at the very least, a display case for their pastries. It would be a good strategy to tempt customers into purchasing more food while waiting for a table. 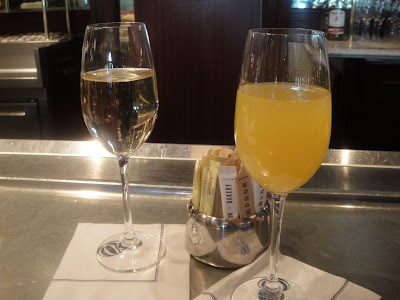 The wait was minimal at 5 minutes so we decided to start at the bar for some bubbly. They had a pretty good and reasonably priced wine list and good beers on tap like Delirium and Dogfish. Soon after, we were seated outside on the patio overlooking the pool. 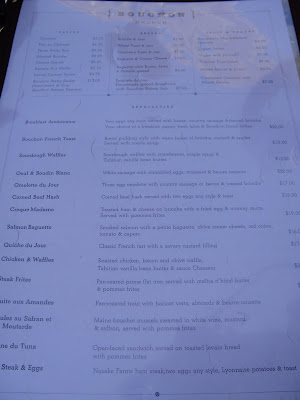 The brunch menu included typical American breakfast fare such as french toast, waffle and eggs. I was almost tempted to go with the chicken and waffles until I noticed that the chicken was roasted not fried. I'm on vacation, goshdarnit, I'm going to have something relatively unhealthy. 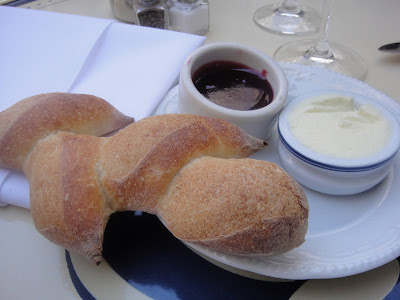 We had to ask for bread when we saw our neighbors being served one. The bread was hard as rock and quite ordinary. It was very disappointing since the Bouchon brand is associated with awesome baked goods but I would not consider this bread to fall under that category. 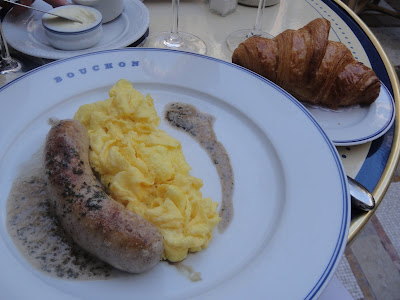 Oeuf and Boudin blanc
The white sausage was served with scrambled eggs and a butter croissant. The sauce was a beurre noisette. The boudin blanc was pretty good and is something that I don't see enough on menus. The croissant was heavenly. Initially, I was discouraged when I saw that it wasn't warmed up as I figured it might taste a little stale. However, it was buttery and crumbled upon touch. The eggs however looked blah, a bit like airplane food. The plating was just very unappealing and not something I would expect from a Keller restaurant. 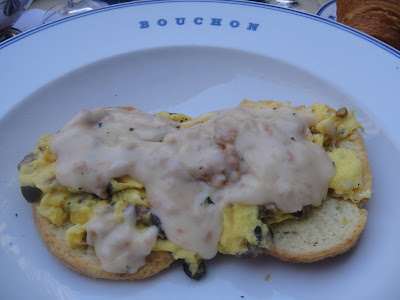 One of the specials was the oeuf du jour.
Scrambled eggs with biscuits and homemade gravy with forest mushrooms. I thought the brioche would be fluffy and buttery. Instead it was dry and hard. The dish actually looked really offensive with the gravy poured all over the eggs. I actually lost my appetite just looking at it. The gravy was a horrid shade of paste. It also had a disturbing seafood flavor which I didn't like at all. I mentioned it to the waitress when she cleared my plate which I had left touched, but all she said was "I don't think there's seafood in the gravy". I wasn't expecting it to be taken off the bill (although some places would have done so and you would think a Keller joint would) but a simple "I'm really sorry or can I get you anything else" would alleviate the situation. 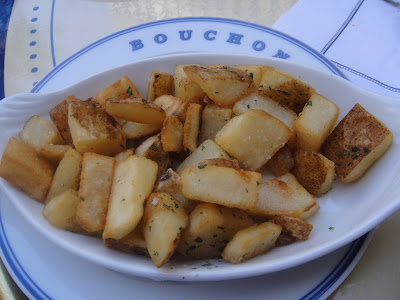 The only good thing about the dish were the side of potatoes which the waiter forgot to serve with the rest of the meal and only brought it out when we were pretty much done. The potatoes were good and not starchy. The inside was soft and pipping hot with a slight crisp on the outside. It was sufficiently seasoned as well. 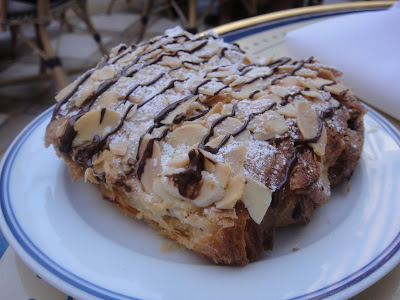 I was so disappointed with my egg dish and was starving while watching everyone eat so I ordered a chocolate and almond croissant. It was actually pretty darn good. Somehow the croissants really shined although it left me wondering why the bread and brioche were a letdown. Similar to the butter croissant, this was also flaky and buttery with a melted chocolaty filling. It's pretty hard to eat this elegantly and I was left with traces of powdered sugar and chocolate residue all over my face.

When we left, there still wasn't a line so it's good to know that we could have slept in a bit longer and hopped on a later flight. The food was surprisingly very unimpressive except for the croissants. It was also pricey for the quality of food at $26 for the horrendous egg dish with funky gravy and dry bread. The presentation was also lackluster and made the dishes look even more unappetizing. I really expected more from a Thomas Keller establishment. The only thing worth going back for IMO are the croissants. And for the $55 that I spent on my brunch which included a mimosa, I could have bought 13 more croissants instead of the egg dish that was left untouched. Now that would have been an epic Keller brunch.

Interesting. I suppose it's probably not fair to judge the entire restaurant by the brunch service, since brunch tends to be where good food goes to die, but it doesn't bode well.

Have you been to LA's Bouchon such that you could compare the two?

I hit the bakery a few times while I was in Vegas, which had some good stuff.

Yikes! I would have been so sad if I'd been served those icky eggs with seafood-flavored gravy. Thank goodness for carbs! Wonder how the brunch in LA compares...

Sku - I hear ya. Brunch is my favorite meal of the day. I guess I had my hopes raised and was bummed esp since I woke up at 5 to catch the flight out. I haven't been to LA's Bouchon. It's on my list!

Diana - haha yeah.. the color really turned me off! It's true what they say.. you eat with your eyes :)