I love throwing parties. I guess it's the fun of getting friends together. I like looking up recipes online for food ideas. I like being able to crawl into bed after chasing everyone out when the party is over. Yes, I'll find any reason to throw a party. So after our Mammoth condo lease expired, I decided to throw a party to celebrate being back in LA on weekends. Throw in an early Cinco De Mayo theme and you've got yourself a party.

If you're throwing a Mexican themed party, you gotta have some carne asada. I headed over to Sanchez Carniceria to pick up some meat. 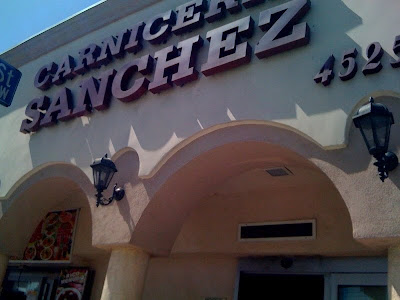 It's located on Culver and Inglewood in Culver City, and is a tiny mart with a butcher shop. Attached to the mart is Taqueria Sanchez, a takeout window that serves all sorts of Mexican fare including tacos, menudo and burritos. 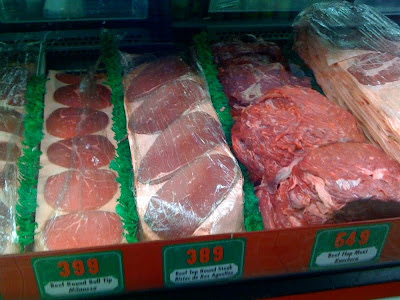 They offer a nice selection of meat in the market, $5.49 per pound for Beef Flap meat that is used for the carne asada. 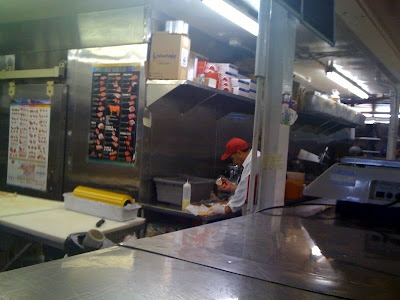 The guy marinates the meat for you on the spot. Talk about custom ordering. They also offer pollo and pork asadas so I picked up a couple pounds of pollo asada.

While waiting for my purchases, I couldn't help but notice the chicharron. I had to partake, it's not every day that I come across freshly fried pork rinds. 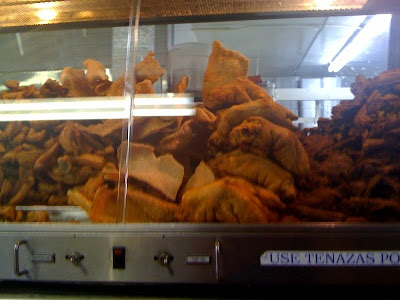 There were various combinations of chicharrons, some were skin only, some had meat attached to the skin. 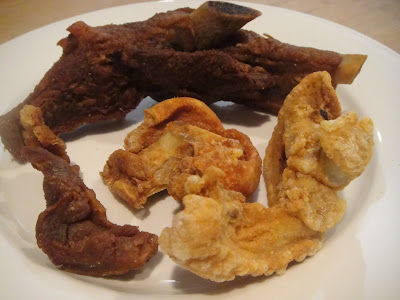 My favorite was the skin only pieces (the lighter colored ones). I thought the meat was a bit heavy and parts of it were dry. But the fried pork crackles were heavenly. The skin was crispy, well seasoned and attached to a layer of porky fatty goodness. One piece is sufficient as it's rather heavy and rich. If you like bone marrow and fried skin (me! me!), you'll like this. Otherwise, move along. 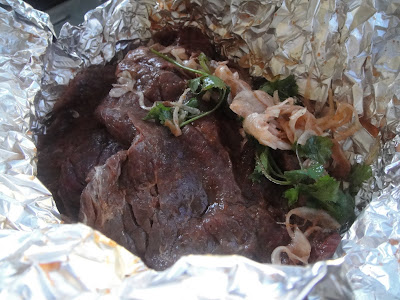 The carne asada was well marinated and a hit at the party. Truly authentic and I'm glad I hit up the carniceria instead of getting the pre-packaged ones at my neighborhood Ralphs. 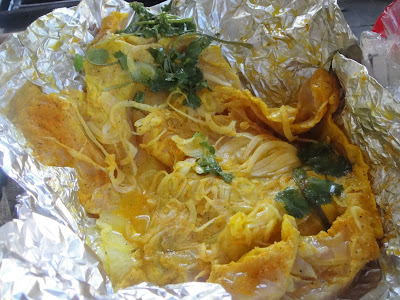 I also liked the pollo asada as it was lighter. The chicken was thinly pounded so it was tender and cooked up pretty quickly on the grill. See, chicken doesn't have to be boring.

With all the meat at my party, I tried to lighten it up with some veggie sides. 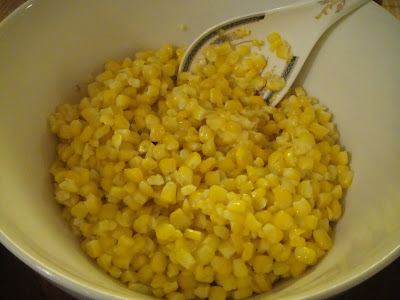 Creamed corn (recipe from Ad Hoc at home, by Thomas Keller) looks simple but had intense layers of flavor. 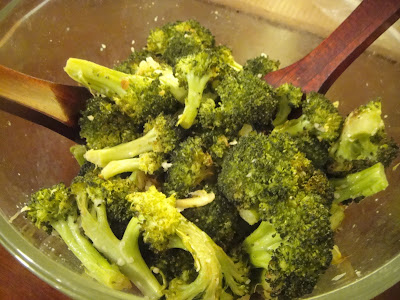 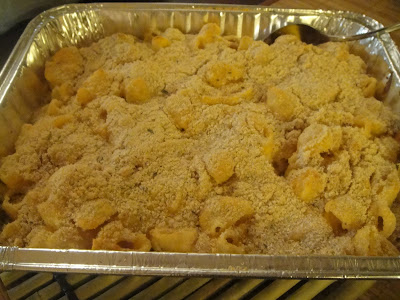 Baked mac and cheese. This photo was taken before we browned it in the oven so the breadcrumbs weren't golden yet. 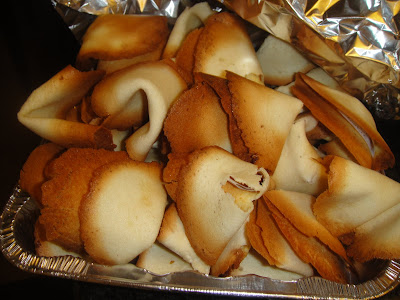 Homemade fortune cookies which are not your everyday Chinese takeout version. This had somewhat of a crepe consistency and was light and crispy, complete with handwritten fortunes. 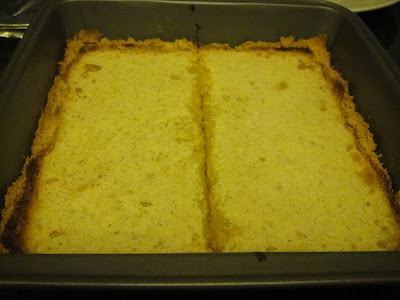 Lemon bars were the perfect dessert. They are not usually my favorite type of dessert as I find them to be too tart or sweet, or both. However this version was yummy.

I throw parties with the semi-homemade mentality. Yes I know, Sandra Lee can be annoying as she's all about using pantry items, but the woman has a point. Don't kill yourself by slaving in the kitchen all day. It's a party. You wanna have fun too. Part of your menu can be store bought because the experts really know better (i.e. marinated carne asada) while the other half (i.e. sides and desserts) can be homemade so that you can add your special touch. This way, you'll be able to sit back, relax with your friends, pound a couple drinks and enjoy the night as well. Now, that's a party.

Creamed Corn (from Ad Hoc at home, by Thomas Keller)

With a sharp knife, cut vertically down each ear of corn to slice off the kernels. Put the kernels in a large bowl, then hold each cop over the bowl and use a spoon or the back of a knife to scrape any remaining corn and the milk from the cob.

Grate the zest of the lime, preferably with a microplane grater; set aside. Cut the lime in half.

Melt the butter in a large frying pan over medium heat. Add the corn, squeeze about 1 tablespoon of the lime juice, or to taste, over the corn, and season with salt. Reduce the heat to medium-low and cook until all of the liquid has evaporated, concentrating the flavour, and the corn is beginning to sizzle, 15 to 17 minutes.

Stir in ¾ cup cream, the cayenne, and lime zest. Continue to cook for 6 to 8 minutes, until the cream is absorbed by the corn. Add up to ¼ cup more cream if desired for a creamier texture. Add salt to taste and stir in the chives

Preheat the oven to 425 degrees F.

Cut the broccoli florets from the thick stalks, leaving an inch or two of stalk attached to the florets. Discard the rest. Cut the larger pieces with a small knife, pulling the florets apart. (You should have about 8 cups of florets.)

Place the florets on a sheet pan large enough to hold them in a single layer. Toss the garlic on the broccoli, and drizzle with (up to) 5 tablespoons of olive oil. Sprinkle with salt and pepper.

Roast for 20 to 25 minutes, until crisp-tender and the tips of some of the florets are browned.
Remove the broccoli from the oven, and immediately toss with 1 1/2 tablespoons olive oil, the lemon zest, lemon juice, pine nuts, Parmesan and basil. Serve hot.


Mac and Cheese (by David Lieberman)

Meanwhile, in a large saucepan, melt the butter over medium heat. Add the flour and stir to form a smooth paste. Cook for about 2 minutes, being careful not to brown. Gradually add the milk and the half-and-half and simmer until thickened slightly, stirring all the while. Remove from the heat. Stir in the 3 cheeses and season with black pepper, to taste. Add the cooked pasta and mix into the cheese sauce thoroughly.

Mix the egg white and vanilla until foamy but not stiff. Sift the flour, salt, and sugar and blend into the egg white mixture. Add lemon juice.

Place teaspoonfuls of the batter at least 4 inches apart on one of the prepared cookie sheets. Tilt the sheet to move the batter into round shapes about 3 inches in diameter. Be careful to make batter as round and even as possible. Do not make too many, because the cookie have to be really hot to form them and once they cool it is too late. Start with 2 or 3 to a sheet and see how many you can do.

Bake for 5 minutes or until cookie has turned a golden color 1/2 inch wide around the outer edge of the circle. The center will remain pale. While one sheet is baking, prepare the other.

Remove from oven and quickly move cookie with a wide spatula and place upside down on a wooden board. Quickly place the fortune on the cookie, close to the middle and fold the cookie in half. Place the folded edge across the rim of a measuring cup and pull the pointed edges down, one on the inside of the cup and one on the outside. Place folded cookies into the cups of a muffin tin or egg carton to hold their shape until firm.