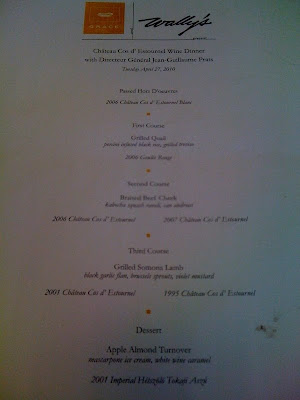 On April 7, Grace Restaurant on Beverly Blvd. hosted the Château Cos d’Estournel Wine Dinner with Wally's Wine & Spirits. A 4-course menu created by Grace's Chef/owner Neal Fraser was paired with vintages from the Bordeaux winery. Fraser's resume includes time at Pinot Bistro, Spago, Rix in Santa Monica (one of my favorite places back in the late 90's) and Jimmy's in Beverly Hills. Although I've never been to Grace, I've tasted Fraser's cooking at the 5X5 Collaborative dinners at Water Grill and Angelini Osteria. Unfortunately, I don't think I was all too impressed with Fraser's dishes. His New York steak at Water Grill although cooked well, was paired with other ingredients that were either bland or didn't work well with the meat. The octopus dish he prepared at Angelini Osteria was rubbery and not very flavorful. But I was willing to give Fraser another shot, on his home turf, especially since critics and friends have raved about their dining experiences at the restaurant. 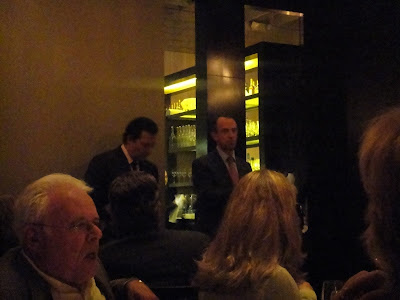 The restaurant which is named after Fraser's daughter, has a rather sleek and modern decor. Jean-Guillaume Prats, the director of Château Cos d'Estournel provided some background of the winery and each selected wine.

The event started off with cocktail hour. When I first walked in, a waiter immediately handed me a glass of wine. Oooh I could get used to this. Unfortunately I wasn't feeling well so I knew I had to keep the booze down to a minimum. The crowd bordered on the older side and we were one of the few young(er) ones there. I was also probably the most under dressed (most of the gentlemen were in jackets). Oops. Well, at least I was wearing proper footwear and not my usual flip flops.

The wine served during cocktail hour was the 2006 Chateau Cos D’Estournel Blanc. A surprise addition to the menu was the 2009 which was recently awarded 98-100 points by Robert Parker. I personally thought it was a little heavy and strong but Jean-Guillaume did mention that it did need to age a little for the flavors to really develop.

There were three Hor d'oeuvres passed around:
King Crab with Toasted Cous Cous, Black Truffles (sorry, didn't get a photo as I was juggling a glass of wine and the king crab which was served in a spoon). The cous cous was firm and burst in your mouth. I liked the texture. 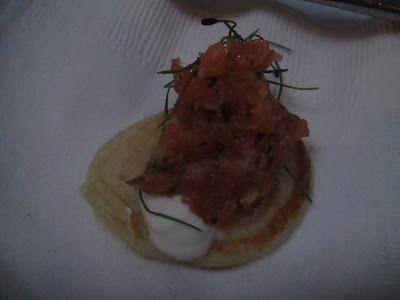 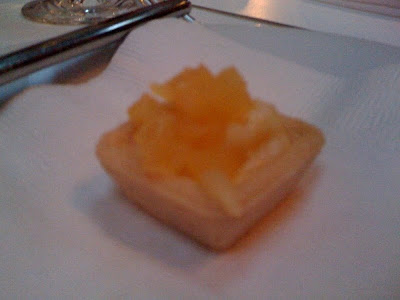 Goat Cheese Tarts, Golden Beets
Apparently the goat cheese wasn't too strong. Of course I didn't try it because I still despise cheese especially goat cheese. But I was told that the tart was buttery and the flavor overpowered the cheese, in a good way.

After the cocktail hour, we made our way to our seats which were assigned at a table with other diners. I wondered if they did any research to see which guests would be better suited at the same table. We had all sorts of people at our table: there were some wine connoisseurs and there was an entertaining and slightly crazy woman who started the night scowling at the waiters and diners at our table, but lightened up after a couple glasses of wine. Ahh, wine really does work magic. She kept asking the waiter for refills. Hey, this isn't a AYCE Korean BBQ joint, you know? Also, she kept kicking my foot under the table. humph.

Fresh bread was served which smelt delicious. It was so tasty that I stole my friend's share of bread - thank goodness for friends on a low carb diet. 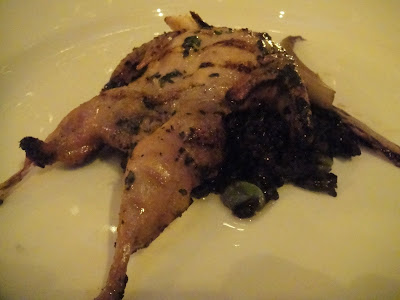 Grilled Quail with porcini infused black rice, grilled treviso
2006 Goulée Rouge
The quail was cooked well but wasn't memorable because I felt that it wasn't seasoned enough and had a bit of a charred flavor. The treviso was bitter and really overpowered the dish. I did enjoy the black rice which had a nice earthy flavor from the porcini. 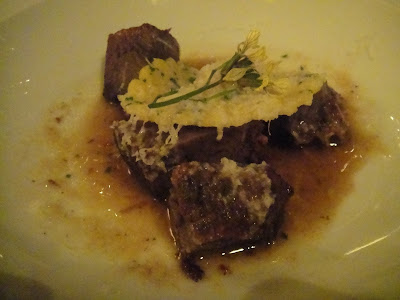 Braised Beef Cheek with kabocha squash ravioli, san andreas
2006 Château Cos d’ Estournel
2007 Château Cos d’ Estournel
The beef cheek was a perfect luxurious bite. Great comeback, Fraser! It was fork tender and not heavy or dense. The squash ravioli was divine. The squash puree was well seasoned and the pasta was al dente. I only wished they served more than one ravioli. Everything on the plate was delicious and worked well together. 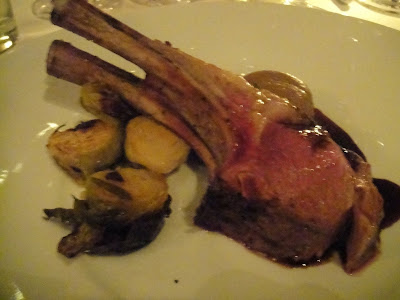 Grilled Somona Lamb with black garlic flan, Brussels sprouts, violet mustard
2001 Château Cos d’Estournel
1995 Château Cos d’Estournel
The lamb was tantalizing. It was cooked perfectly, flavorful and served in a generous portion. I really enjoyed the Brussels sprouts which were sauteed in butter (yum!) and had a nice caramelization. Moms need to get this Brussels sprout recipe for their kids. The garlic flan was interesting, it had a texture similar to liver or foie gras. I really enjoyed it because it was unique and not too garlicky but yet you could taste the garlic essence. 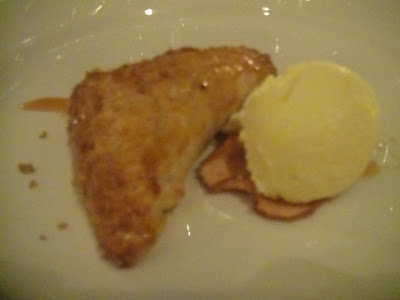 Apple Almond Turnover with mascarpone ice cream, white wine caramel
2001 Imperial Tokay Hetszolo Aszul
I was hoping for a chocolate dessert to end the night but was pleasantly surprised with this. I think after all the heavy meats, a sweet pastry was the right choice to end the meal. The pastry was buttery and crumbly and was coated with crystallized sugar. The apple almond wasn't too sweet which was what I was afraid of. The ice cream was mildly sweet. I also liked the wine that was paired with dessert as it added a nice sweetness.

It's interesting to attempt a menu that is paired primarily with red wine. Chef Fraser tried his best not to make the dishes too heavy but there was inevitably a heavy meat presence. There were two ladies at our table (one gluten free, one vegetarian; the former was the leg kicker) and the kitchen did a great job of accommodating to their needs. I did wonder why they would bother coming to a dinner pairing event if they had to alter the dinner portion so significantly. Although they probably thought the same about me: why would a woman come to a wine pairing event if she barely drank her wine. 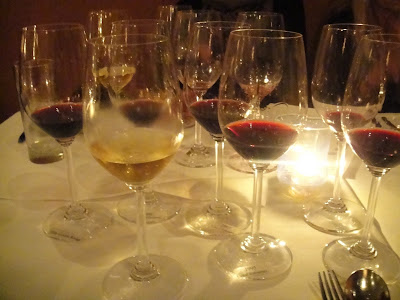 This was my collection of wine glasses by the end of the night, mostly half drunk, which is a RARE occasion especially for a lush like myself. Sigh, what a waste, it really breaks my heart to see wine go to waste :(

I enjoyed the night and the food, especially the beef cheeks and lamb. The price tag was $135 per person (not including tax or gratuity) which may sound high but is actually a pretty good deal considering most of the wine served was priced at well over $100 a bottle. I thought it was a great opportunity to taste some fine wine (I enjoyed the 1995, 2001 and 2007 selections) especially those that I normally could not afford. A fun night but next time, I'll be sure that my health doesn't come in the way of my wine consumption.

Wow - that's a TON of wine! Too bad you weren't feeling well. Though even if I were feeling at the top of my drinking game, I think I'd have trouble taking down all those glasses!

haha Diana, if i were feeling better, i would most def have polished off the wine!

Haha I felt out of place at the dinner as well. I didn't see anyone else with a camera otherwise I would have come by and said hi.

Epicuryan - They stashed us in the corner like poor rejects so you wouldn't have seen me! Did you get funny looks at the table when you took photos? Thankfully the ladies beside me were trashed so they didn't notice!