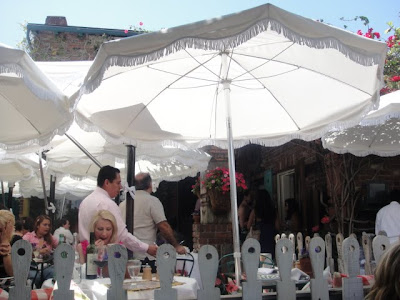 The Ivy is the place to see and be seen. It's where the celebrities like to dine with their publicists, pushing around a little salad on their plate with their fork. Well, I always far stay away from the Hollywood scene and we are definitely no celebs. We're just a few post grad students that have been talking about going to The Ivy (my friend lives a few block away and raved about their gimlets) ever since our late night study sessions when we would try to find something fun to look forward to, that light at the end of the tunnel. A year later, after some procrastination, we finally got The Ivy on our calendar.

Located on Robertson Blvd. near the boutiques such as Lisa Kline and Kitson (you'll never see me in those store), The Ivy is located in a little cottage with white picket fences and umbrellas covering the patio. Even though it's a celeb favorite, its actually rather quaint and welcoming. They also had a lot of wait staff per square footage. 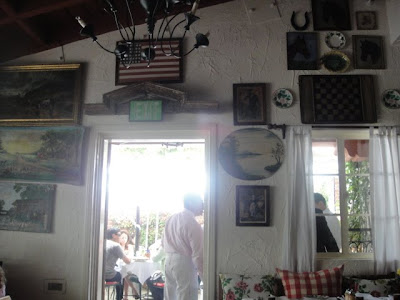 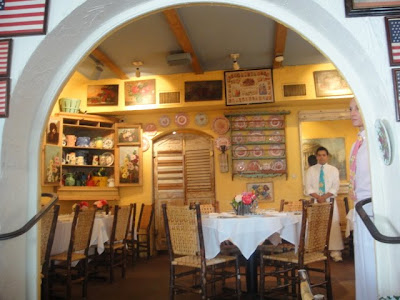 We were seated inside since the wait for a seat at the patio would take 45 minutes. The decor is kind of kitschy, you felt like you were in your grandma's home. There were a lot of knickknacks, antiques, pottery, pillows and embroidery scattered around the room. 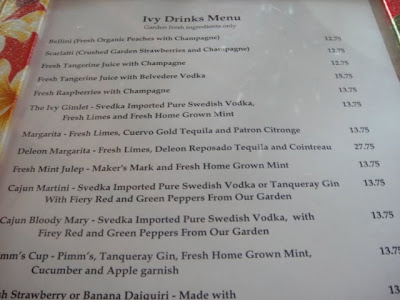 The cocktail menu was fun and flirty, quite different from the dated decor.

I'm a very Type A diner, I usually have to study menus online prior to getting to the restaurant. It gives me something to look forward to. And I don't like surprises. Unfortunately, trying to find the Ivy menu online is like trying to find the lost city of Atlantis. Absolutely impossible. I wasn't sure if it was because no blogger would ever step foot in The Ivy, or if their menu was top secret and they didn't want anyone photographing it. Thankfully, it seemed as though they could care less if you took photos. 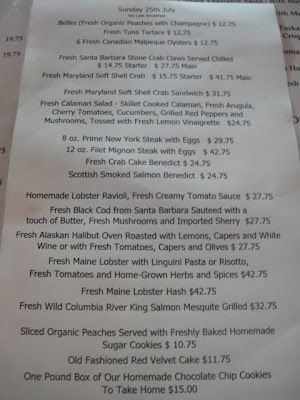 The daily specials included crowd favorites such as the soft shell crab and the lobster ravioli. 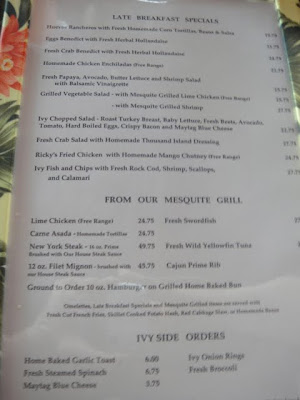 I had read good reviews of their grilled vegetable salad from their regular brunch menu. I was very close to ordering this (even though I would NEVER order a salad as an entree at a restaurant, especially if there were carbs and meat offered) but I wondered if diners only liked the grilled veggie salad because well... they are health conscious and salads are all they eat, and god forbid they order the fish & chips (which looked great BTW) or the enchilada. Well, I wasn't going to chance it and be underwhelmed by a bunch of veggies. Fried chicken it is then! One thing I noticed was that the word fresh appeared everywhere on the menu. You know, fresh crab, fresh papaya, fresh tomatoes. Go ahead, see for yourself. Not sure why they would need to mention it in every dish. They could have added a footnote to the menu stating that they source their ingredients fresh. 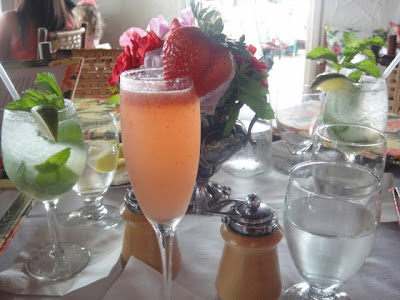 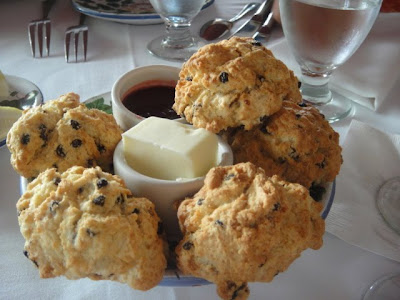 Freshly baked scones were warm and crumbled in your hand. 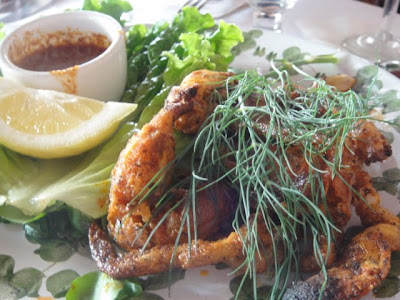 Fresh Maryland soft shell crab
We got the starter portion for $15.75 (Main for $41.75). You could choose to have it cooked with lemon butter, or in Cajun spice. We opted for the latter. Very tasty. The crab was perfectly breaded and seasoned. 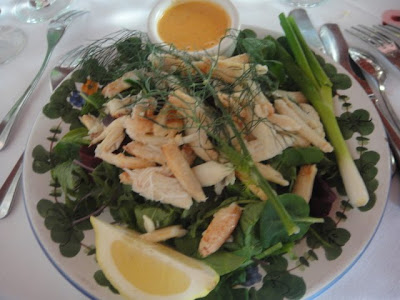 Fresh crab salad with homemade thousand island dressing
There was a disproportionately large amount of crab (I'm not complaining) which was fresh and of good quality. The dressing was thousand island which doesn't automatically sound good, but in fact was, as it didn't have a strong relish flavor. 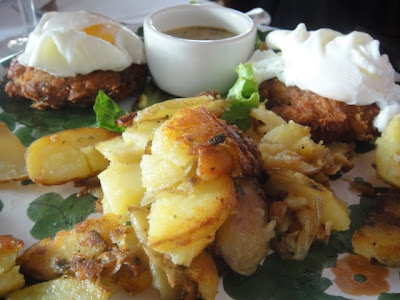 Fresh crab cake benedict
The crab cakes themselves were well.. fresh, while the eggs were perfectly poached. It was a pretty generous portion as well.

While I was busy directing everyone at the table on their photo taking, I forgot to take a photo of my food. Arrrgghhh!!! I'm kicking myself only because my dish was darn good.

Ricky's Fried free range chicken with homemade mango chutney
Honestly, I was apprehensive about the fried chicken. #1 I was sick and had a sore throat. Fried chicken = bad. But then again, so is a scarletti and a gimlet hmm... #2 How good can fried white meat chicken be? #3 Can a celeb hot spot really excel in fried food? Salads, I can understand. But high calorie fried food? Well, The Ivy's fried chicken rocked. The breading was perfect- it wasn't soggy. Instead it was crispy yet not greasy. The chicken itself was juicy and was served with two large pieces cuz you know, you gotta have both breasts. I wasn't the only one impressed. The chicken made its way around the table, followed by nods of approval. Unfortunately the fries were just OK and a bit on the starchy side. I wished they had served shoestring fries or something thinner instead. But that's just a personal preference. I'm excited to compare this with Eva Restaurant's fried chicken coming up in a few weeks. 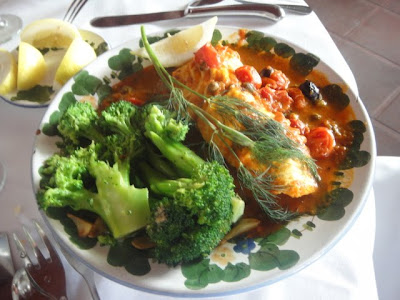 Fresh Alaskan halibut oven roasted with fresh tomatoes, capers, and olives
Biggest disappointment of the meal. The fish was dry. The sauce was overly salty and concentrated. The flavors were also just really boring. Our waiter asked how it was, we said it wasn't good and that the fish was dry and the sauce was too salty. He offered to bring by another sauce (didn't offer to bring new fish) but by this point, my friend was over it. 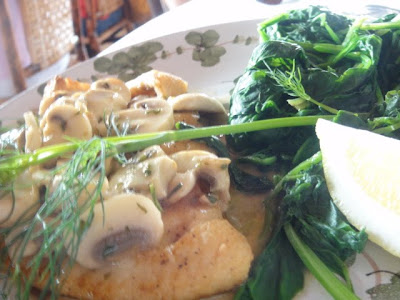 Fresh black cod from Santa Barbara sauteed with butter, fresh mushrooms and imported Sherry This fish on the other hand, was cooked well. The cod was fork tender and the sauce was flavorful. I usually only eat black cod when it's cooked with miso, so this was a nice change.

Food was better than I had expected (but my expectations were rather low). I was pleasantly surprised with how delicious their fried chicken was. Those scones were addictive (we had to get a refill). And those gimlets were strong (but probably not good for a sick gal). When the bill came, we noticed that they had removed the halibut. Our waiter hadn't even mentioned it. I thought it was a classy move instead of him coming by to make a big deal of the gesture. It wasn't a cheap brunch by any meals. People can gripe about the prices but I have to say, the portions were very generous. I definitely would have had leftovers if I hadn't pawned off half my chicken to the rest of my party. I even had leftover fries, which is a rarity. But then again, people don't go to The Ivy for a cheap meal. They don't go to The Ivy for a spectacular meal. They go to The Ivy to see and be seen.

I'd actually love to go to the Ivy. Think it would be fun to play Hollywood tourist for a day! Especially if there's yummy fried chicken.

Hope you are feeling better!

I'm with Diana! I am itching to try those scones and crabs you speak of (ugh, that sounds like a horrible STD). All honestly, I am looking for tourists koo-lats now. I'm Janey from Kanosha, WI.

I, too, have abysmal expectations of the Ivy's food -- but the menu and your blogpost definitely makes it worth considering... should my friends and I feel like gawking at C-listers for a day.

gimlets be my poison. mmm...but good to hear they actually have some tasty items!

Baller. I love LA. I should start doing lunch here. C-listers are AWESOME. The end.

Diana - Thanks! I'm much better. back to drinking again :)

H.C. - I don't think there was even c-listers there that day! You and your friends should go on a weekady lunch, think thats when the "stars" are there power lunching

bagnatic - wish they had a bar there, would be more fun just to hang out, pple watch and drink gimlets.

sinosoul - I don't think I could even identify c-listers. but was still fun to people watch