The 5X5 Chefs Collaborative occurs annually and includes five separate dinners. The dinners rotate at five noteworthy Los Angeles restaurants (Providence, Melisse, Water Grill, Angelini Osteria and Grace), and each of the famous chefs from the five restaurants prepare a dish at each event. A guest chef also joins the team each session. This is not a cheap meal at $150 per person ($215 with wine pairing), however a potion of the proceeds goes towards a great charity. Last night, LB and I attended the one held at Water Grill.
Water Grill is located in Downtown LA and specializes in upscale seafood cuisine. Seafood guru Michael Cimarusti worked at Water Grill for seven years before leaving to open up Providence Restaurant. Both restaurants currently hold Michelin Stars (One for Water Grill and Two for Providence). During the 5X5 series, the chefs prepare their dishes to the style of the host restaurant, so we were expecting a lot of seafood on the menu. 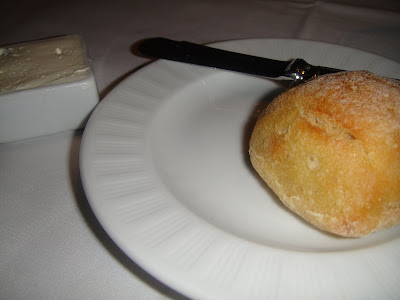 Bread and butter. The bread choices were ciabatta, french loaf and olive bread. The waiter made a couple stops to our table when he noticed that we had finished our bread. 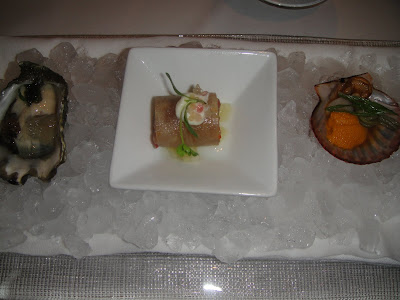 Amuse Bouche
Trio of Big Eye Tuna with Heart of Palm, Bay Scallop, Uni and Cha Soba, and Kumamoto, Sea Grapes, Organic Brown Rice Vinegar Granite - David LeFevre (Water Grill)
*Francios Mikulski, Bourgogne Aligote 2006
This was such a good dish; the seafood was fresh and the presentation was lovely; Oyster and Scallops on shell, and tuna on a plate in the center. The uni was delicious; it only required a small piece as it had such an intense flavor. It was creamy and tasted of the ocean. The soba noodle garnished with the scallop and uni was tied up in a ribbon. This whole dish was very delicate and pleasing to the eye. I actually have never had such a comprehensive amuse bouche. Typically you get a tiny bit of something, so I was pleasantly surprised with this spread. 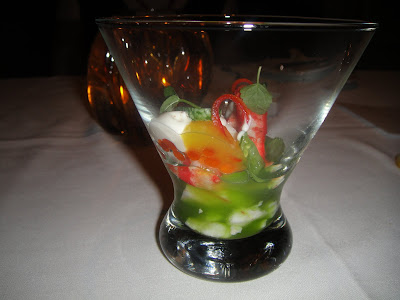 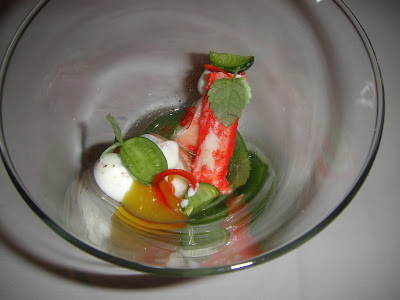 #1. King Crab, Steelhead Roe, Kalamansi, Tangerine Lace and Togarashi - Curtis Duffy (Guest Chef)
*Heyman-Lowenstein, Reisling Qba, Schieferterrassen, 2006
What an amazing dish. First of all, the colors were eye popping. I also loved how the ingredients were unique; I had to do a google search of Kalamansi at the table. The crab was fresh and a little sweet, and the cucumber sauce that it was sitting in had such a lovely creamy flavor that we were trying hard to get in every last drop. I typically do not like roe because it tends to be very fishy. However the steelhead roe was fresh, not pungent and just a little salty.
When we raved about the dish to our waiter, he called the chef over to our table. Chef Curtis Duffy, previously at Charlie Trotter's in Chicago, currently cooks at Avenues, the restaurant at the Peninsular in Chicago. He's obviously very talented and also extremely good looking. I can't wait to watch his career explode. 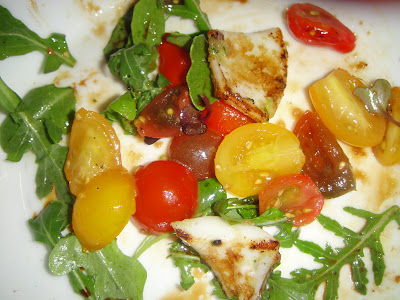 #2. Calamari with Cherry Tomatoes and Baby Arugula - Gino Angelini (Angelini Osteria)
*Signaterra Sauvignon Blanc, Russian RiverValley 2008
It was interesting to see Chef Angelini present a non-pasta dish, after all his restaurant is known for its pasta and pizza dishes. This was another delicious dish. The calamari was grilled to perfection and lightly salted. It had such clean and simple flavors. The colorful cherry tomatoes brought vibrancy to the plate. 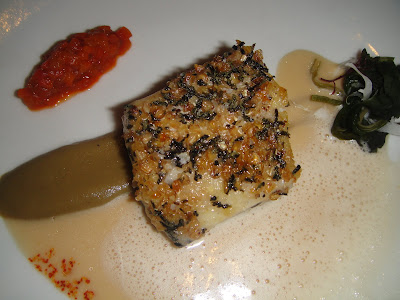 #3. Nori crusted Wild Striped bass with Eggplant and Essence of Seaweed - Josiah Citrin (Melisse)
*Cote de Lune Blanc, Saralee's Vineyard, Russian River Valley 2008
Foam was poured on the plate table side which added a buttery flavor to the fish. There was a top crust on the bass that tasted like crushed fish bones. I loved the texture; it was crunchy and had fish essence. The eggplant puree was smooth and creamy. All the flavors were amazing and worked well together, with the white fish as a blank canvas. Melisse is known for its classic French cuisine and Chef Citrin is all about foie gras, caviar and truffles. When eating his contributed dish, you can see this on the Water Grill menu and really not something you would expect at Melisse. Indeed Chef Citrin cooked his dish to the style of Water Grill.
The wine that was served with the dish was so buttery. When drinking it alone, it was a little overwhelming. But when pairing it with the bass, the rich flavor of the wine worked well with the fish. 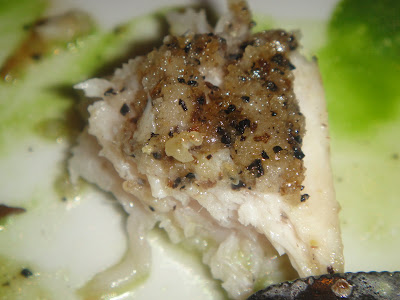 #4. Confit swordfish with Truffle, Maiitake Mushroom and Spinach Velute - Michael Cimarusti (Providence)
*Domaine Desertaux-Ferrand, Le Sceaux, 1er Cru, Beaune 2005
This plate looked similar to the last: white fish with a nice crust. I rarely see a confit of fish but I can only imagine that it was the reason that the swordfish was so flaky. I liked the earthiness of the truffle. In an eagerness to eat this dish, I forgot to take a photo until it was too late. Above photo shows the last chunk of swordfish. 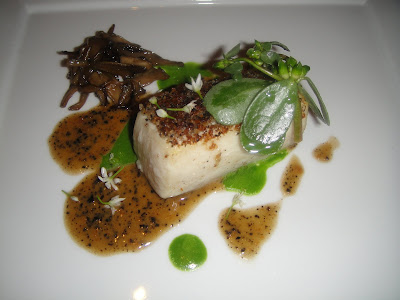 Thankfully, Michael Cimarusti came by and I told him that his dish was so delicious that I forgot to take a photo. Towards the end of the night, he brought by another plate of swordfish so that I could take a proper photo (above). 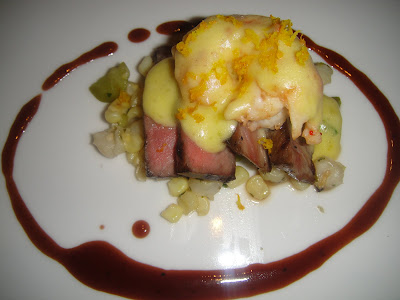 #5. Grilled Dry Aged New York Steak
Corn, Fava Beans, Hominy and Shrimp Bernaise - Neal Fraser (Grace)
*Chateau Vignot, saint Emillion Grand Cru 2004
I liked the individual components of this dish. The steak was tender, and I loved the corn and bean sauteed under the steak. The bernaise was also not too heavy, unfortunately even though it had a shrimp in it, it was not infused with the shrimp flavor. I didn't think there was a WOW factor to this dish. The bernaise sauce seemed a little disconnected from the rest of the dish, like it was slopped on as an afterthought. Perhaps if it was a lighter and smoother sauce that melted into the meat, it might have combined better with the dish. I didn't have the urge to lick the plate. 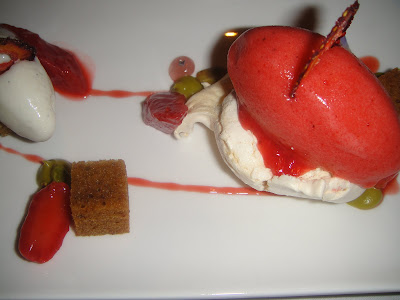 #6. Pistachio Pavlova with Strawberry-Rhubarb Compote
Lavender, Mascarpone Ice-Cream, and Strawberry Sorbet - David Lefevre (Water Grill)
*Yalumba NV
This dessert was light and sweet but it wasn't the chocolate dessert that we had hoped for. I felt that since most of the courses were not too heavy as most of them were seafood items, a rich dessert would have been a nice end to the meal. In any case, the dessert was still good. Pavlova is a meringue and is crunchy and airy. 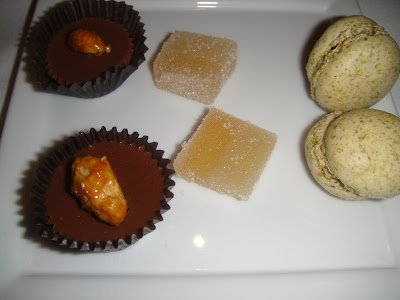 The night ended with mignardises including pistachio macaroons, chocolate ganache and lychee geelee. Yes, we got our chocolate fix!

Overall, what an amazing dinner. I was excited to be in the presence of such notable chefs. From my seat, I could see them in the kitchen, huddled around a kitchen table, working together. The food was memorable, the ingredients were fresh and unique, and the presentation was lovely. I also felt that the wine was well paired.

The service was outstanding. Our waiter was knowledgeable about the food and wine, and seemed genuinely excited to be part of this event. The chefs were also very good hosts and were warm and welcoming. They came out of the kitchen to speak with the guests and to ensure that everyone was satisfied. Even Providence co-owner and manager Donato Poto was on deck, pouring wine and facilitating service.

Our waiter told us that unfortunately the turnout for 5X5 this year was dismal (85 guests vs. 135 last year). He also mentioned that the advertisements and promotions were lacking this year. I find this very tragic. I am not sure if the lack of advertisement played a huge role in the low turnout, or perhaps diners are not willing to pay the $150 price tag during these recessionary times. As a portion of the dinner proceeds goes towards the Southern California Chapter of the Special Olympics, I had hoped there were more guests at the event.

There is one more 5X5 dinner, at Angelini Osteria on September 21 which LB and I will be attending as well. If you can spare the cash, come support the chefs and the charity. You'd be hard pressed to find another event that showcases such excellent dishes from five culinary geniuses.