Campanile Restaurant is a Los Angeles classic, founded in 1989 by then married-couple, Chefs Mark Peel and Nancy Silverton. Silverton, founder of La Brea Bakery and renowned pastry chef, sold her interest upon their divorce. But don't cry for her; she went on to open Pizzeria Mozza and Osteria Mozza with Mario Batali, the latter of which was nominated for a James Beard Award. Mark Peel's resume is impressive as well. He helped open Michael's in Santa Monica, and Wolfgang Puck's Spago, and has recently been all over Bravo TV as one of the finalist in the Top Chef Masters.

Each Monday, Campanile offers a special menu in addition to their dinner menu: 3 courses for $45. This is a really good deal for dining at a restaurant that has earned numerous culinary awards and one that prices its entrees starting in the $30s. I've actually dined on both the Monday Night Supper, and the non-Monday regular menu. In fact, arguably one of the best meals I've had was a duck special on a Monday night that included duck consomme to start, and duck three-ways for the entree. This week's special was clambake, which is essentially steamed clams.
We got there a couple minutes early, so we decided to order a drink at the bar. The bartender was dreadful. I wanted a rose and asked for a recommendation. She asked me what I liked and I responded "nothing too sweet". She said that all of them were not too sweet. I waited for a recommendation. Blank stare. Errr ok, I'll just pick the last one on the list. It turned out to be a horrible glass. I just wish that as a bartender, she could at least list out a few choices. If not, she's simply a wine pourer, and not a true bartender. The mojito was not good as well. It did not have that sweet, minty mojito flavor. 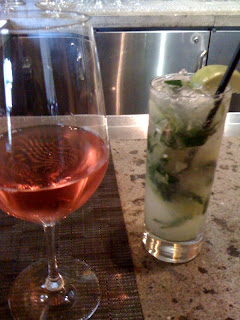 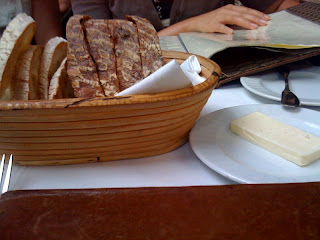 We were seated when the rest of our party arrived. Bread was served instantly. Boy, the bread was good- a little crusty. It wasn't warm but I still enjoyed it. It could be because I only had yogurt for lunch.

We didn't have to peruse the menu: Monday Night Supper, please. 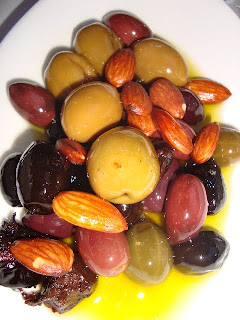 Our waiter dropped off a plate of olives. We also ordered a bellini each. The bellini is made of yellow and peach puree, cognac and sparking wine. I actually didn't like it because I thought the cognac flavor was overpowering. Everyone else liked it though.
First up, chopped salad with blue cheese, salami and prosciutto. They serve these family-style, so two large plates of salad were brought over for the four of us. Unfortunately due to a camera malfunction, some photos were corrupted. This being one of them. No blue cheese please. Our waiter unfortunately included cheese in both salads. When alerted, they brought over an additional plate of salad that did not include cheese. So essentially, we had a salad feast and weren't even able to clean out all the plates. The dressing was light, and I liked the saltiness of the salami. I don't eat enough greens and I am pretty picky about my salads, so I was very pleased that this tasted delicious. It was a light dish to start the meal. 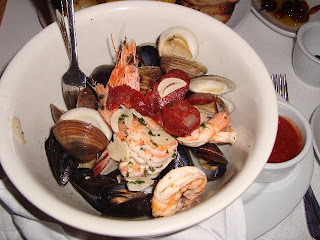 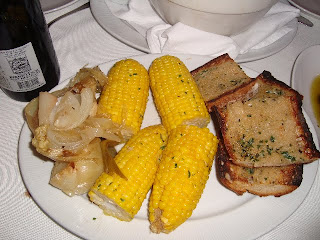 2nd course was the clambake, which included clams, mussels, prawns and sobrasada which is a Spanish sausage. The clams were good but not the best that I've had. I did like the broth. It was very salty but tasted good with bread. The clambake came with grilled corn, garlic bread and onions. The garlic bread was delicious and the corn was exceptional. The corn was sweet and the kernels were firm yet juicy. I usually have a tough time biting off the kernels but these fell off the cob without much difficulty. Sad to say, but the corn was probably the best thing of the course. 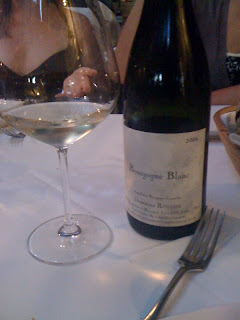 The recommended wine was a 2006 Bourgogne Blanc Domaine Roulot. 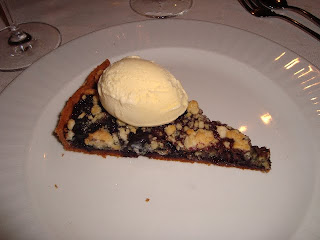 3rd and last course was the dessert. It was a blueberry crostata with sweet corn ice cream. It looked simple and was phenomenal. The pastry was buttery, and the ice cream was refreshing and unique. The dessert was also not overly sweet. Just right.
The Monday Night Supper is a fun way to try different dishes at the restaurant. The menus are posted on the website each month so you'll know a month in advance which day is of interest to you. Although this would typically be considered a good deal, we walked away from the restaurant with a >$100 bill per person. Bottle of wine was $60 and each cocktail was $15. Sigh, my bank account wishes that I didn't drink...
Hits: Bread, dessert, corn
Misses: bartender, the courses weren't that memorable
Rate: **