Trial and (no) Error menu at The Tasting Kitchen 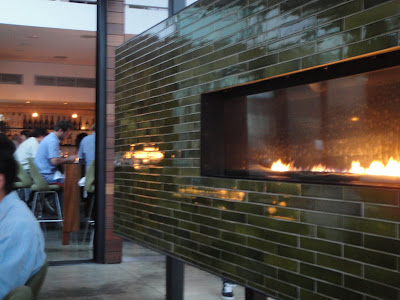 The restaurant AK on Abbot Kinney was on my list of places to try. Unfortunately it was short-lived. Instead, The Tasting Kitchen (TTK) has now set up shop in the AK space. Chef Casey Lane from Portland is testing out menu items July through August, after which he will re-open the restaurant under a new name and menu. Pretty smart idea, if you ask me. After all, the restaurant stays open over the course of the 8 weeks, generating revenue, and in the meantime diners may be a little sympathetic if things do not run smoothly during those 8 weeks due to the experimental nature of the restaurant.
Tonight marks the 32nd day that TTK has been opened (it is opened Tuesdays through Sundays for both lunch and dinner). Joining me are Bertha and hubby Kirk, Chris and Justin. It's always good to have a group when you are dining tapas-style. And it's smart to pick a good group (like the one out tonight), who appreciate fine food and wine.
The restaurant was relatively empty when we first arrived at 7pm on a Wednesday. Hope that a later crowd shows up. Don't want this to be another failed restaurant on the row. 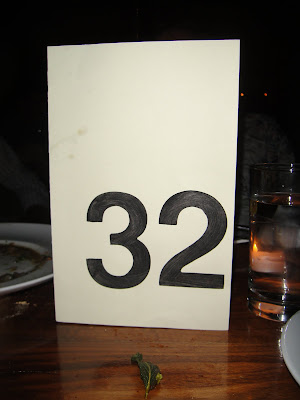 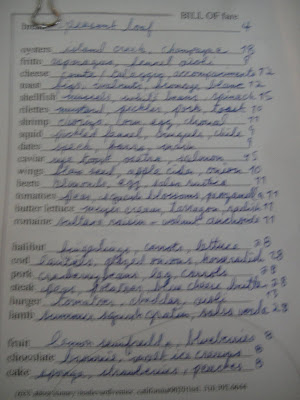 The dinner menu changes daily. There are about 15 appetizers and a couple entrees. Since there were 5 of us today, we decided to order a bunch of small plates to share. 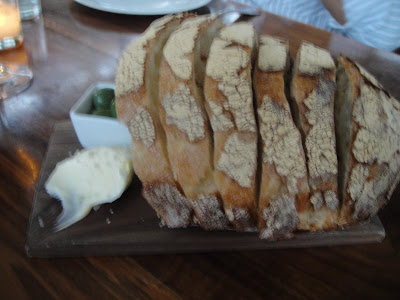 We ordered a loaf of bread. Note: This is something you have to order and pay $4. But it's worth it. The bread was large, crusty and warm. The butter was salted and delicious. The peasant loaf came with a side of olives. 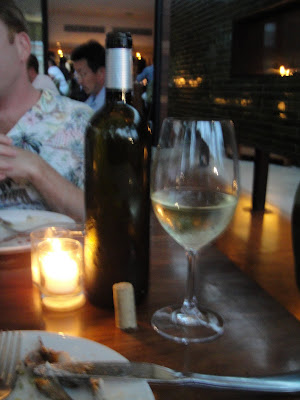 We ordered a bottle of the house white. Interestingly, the house wine is listed as an "Unknown" brand on the menu. Our waiter/manager/sommelier explained that when they made the drive from Portland to LA, they brought over cases of a variety of wine. He tore off the labels and is now serving those bottles as the House Wine. So, do not be surprised if the wine tastes different from bottle to bottle.
We ordered six plates and an entree between the four of us, and Justin ordered his own starter and entree. I love how there is someone else out there who is as picky as me! This was definitely more than sufficient food for five hungry diners. 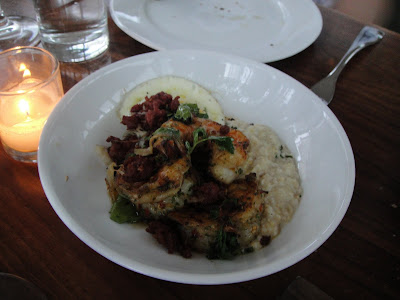 First up was the shrimp with chorizo, corn and fried egg. What an excellent first dish! The shrimp was so flavorful and succulent. No, you will not find rubbery shrimp at this joint. The corn seemed to be creamy, like polenta. It was well-seasoned and delectable. The chorizo was fried and crumbled, and really added saltiness and depth to this dish. Finally, fried egg. You can't go wrong with a fried egg, with runny yolk dripping all over the rest of the dish.
It was a well executed dish that was cleaned out in seconds. 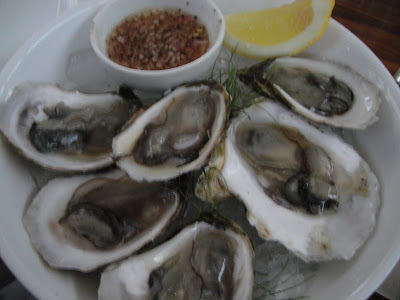 Fresh oysters were fresh and briny. 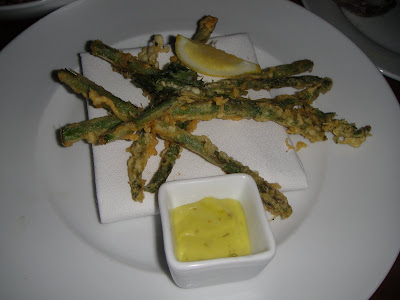 Fritto asparagus with fennel aioli. Always good to get in some greens. When I think fritto, I think fried calamari, so I was expecting that with a side of asparagus. However in this particular appetizer, asparagus was the only and main component of this dish. In any case, you can't go wrong with fried veggies. 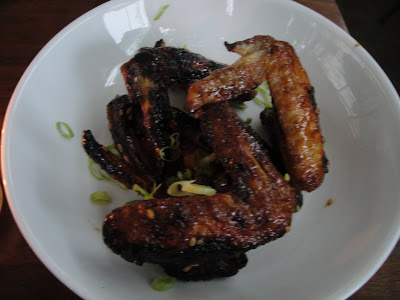 Wings with flax seed, apple cider and onions. Chicken wings in general, are one of my favorite meats because its all skin and cartilage. This was B and my favorite dish of the night. The wings were sweet, like they had been marinated in honey. I thought this dish was interesting because you couldn't even tell that there was flax seed or apple cider on the wings. But boy, were they yummy wings.
Somewhere through the course of dinner, we ordered another bottle of house white. These boys can drink! I like them! 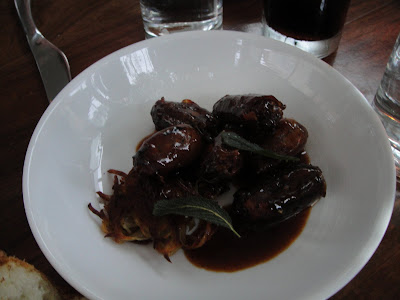 Date with speck, farro and mash. I didn't see any farro so I think it was stuffed in the dates. The dates were creamy, and were wrapped with the speck. Speck is a type of cured meat, similar to prosciutto. The mash was basically potato hash, which lent a nice crunchy aspect to the dish. I LOVE has browns. In fact, it is one of my favorite breakfast item. So I was glad when I saw it hiding under the dates. 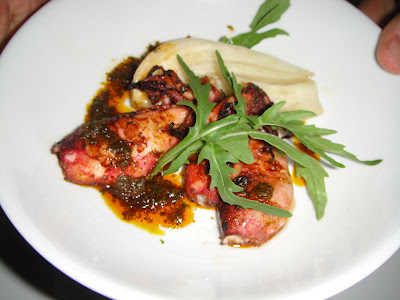 Squid with pickled fennel, chili and arugula. I don't know what the arugula was there for; it wasn't dressed and appeared to be for decoration purposes. Interesting how it was one of the ingredients mentioned in the dish. I also didn't like the pickled fennel either when eating it alone. Perhaps we should have eaten it in the same bite as the squid. Now, the squid on the other hand was delicious. It was cooked perfectly: soft and not chewy at all. 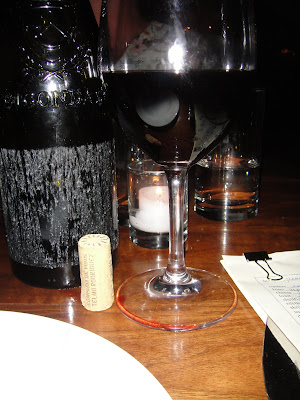 At this point, two bottles of white were consumed. We ordered a bottle of the house red with the entree. 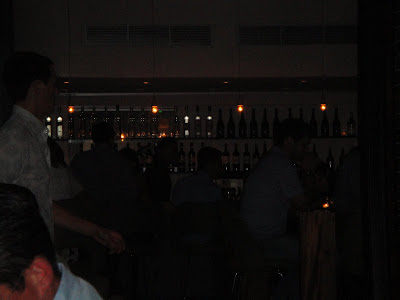 The restaurant was getting busy. Every table was filled, and I heard the waiter tell the table of women beside me that another party was arriving in 20 minutes, and if they could request their check with dessert.. Hmmm.... don't think that is good restaurant etiquette, but so far everything has been spectacular so I'll turn a deaf ear.. In addition, the women didn't seem to mind at all, so perhaps they had been here for a long time and knew that they had "outstayed" their welcome...

Our entrees arrived. By this time, we were satiated. 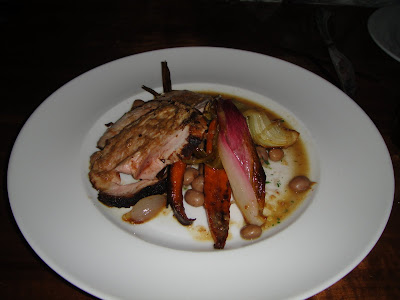 The four of us shared the pork chop with cranberry beans and carrots. Another good dish: pork was well cooked and juicy. Very clean flavors. 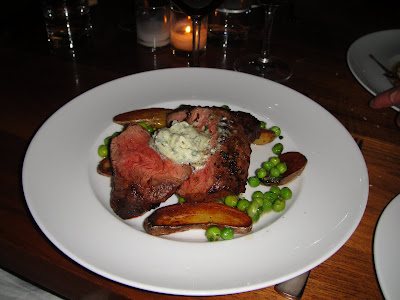 Justin ordered the steak with blue cheese butter, peas, potatoes. Two of my worst enemies: cheese and peas. Needless to say, I didn't try it, but apparently it was delicious. 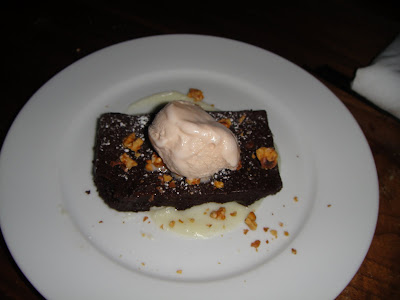 Yeah, I said that we were full, but what's one dessert shared among five people? We ended with the chocolate brownie and malt ice cream. The brownie was warm and soft in the center, just the way good brownies are supposed to be made. I've recently been served ice creams that are not your usual vanilla and chocolate flavor, and I appreciate the variety. Last but not least, Kirk shared with us gum that he had bought from the "Manager's Special" section of the Ralph's on Wilshire and Bundy. Mango and Kiwi flavor. For 50 cents. What an awesome deal!
There is a lot of promise for the new restaurant that will be opening next month. Every dish that we had tonight was excellent, and so was the service. The bill was also cheap. $55 per person including three bottles of wine and a copious amount of dishes. Don't forget to bring good friends with you so that you can taste all they have to offer.
Good job The Tasting Kitchen. I can't wait to return when the new restaurant is up and running.

Hits: every dish especially the dates, shrimp, wings, scallops
Misses: ate and drank too much = gained a pound
Rate: ****