Salt with your martini? Sure, at Lolas! 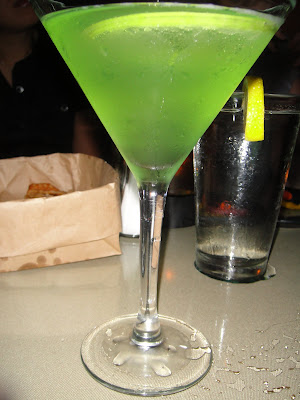 Lola's is a well-known martini bar in Hollywood. Back when people were drinking wine and beer, Lola's made the martini trendy in the 90's. With over 50 types of martinis from chocolate to garlic mashed potatoes, Lola's also claims to be the inventor of the apple martini. Their apple martini, as I recall back in the days when I could pound a painfully sweet and potent cocktail, was sweet, crisp, refreshing and dangerously drinkable. A slice of granny smith apple sits atop the martini, and is a great vodka-infused snack after you are done with the martini.
The Lola's space includes a dining and bar area; the latter includes couches, a pool table and darts. The clientele is mainly young industry types, well dressed and relatively trendy. Lola's is not really known for their food. I've had their Mac and Cheese, and spaghetti and meatballs, which were tasty.
We had heard about a dinner special on Tuesdays and Wednesdays. An adult beverage, soup or salad, and a choice of entree. Entrees include salmon, chicken, pasta and short ribs. All for $23. Can't go wrong at that price tag. Tonight was girls night and LB, Dilu and Jho joined me for dinner. 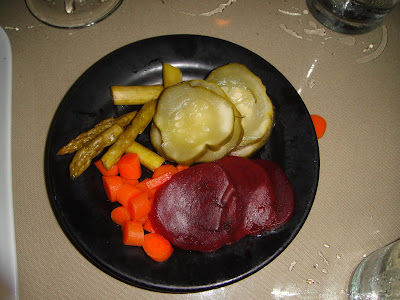 Our waiter brought over a plate of pickled veggies. I quite liked it, especially the beets. I thought it was quite a unique palate cleanser. We also ordered our drink that came with the menu. The online promotion stated a free martini: traditional, apple or cosmo. We were excited when we were told that we could substitute for wine. We ordered a glass of wine each. 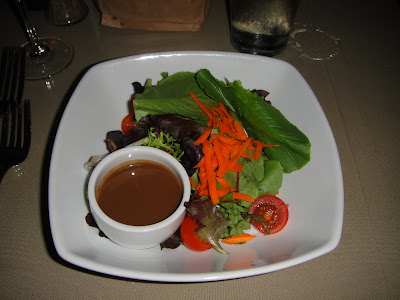 1st course: Salad for Jho. It was a simple garden salad, nothing fancy. The greens looked vibrant and fresh - good sign. 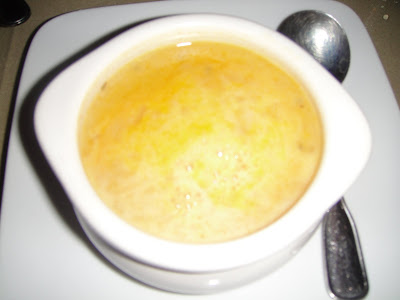 The rest of us ordered the soup, which was the lobster bisque. I had quite a number of issues with this bisque. First of all, the soup came piping hot. Typically, I am the type of person that dives right into a bowl of ramen noodles without scalding my tongue, but this soup was definitely boiling hot. Second of all, the consistency of the soup was thin and viscous, not thick like what a bisque should be. LB compared it to broth, not bisque. Lastly, the soup was very salty. I am never one to waste food, but I took a couple spoons of this, and could not finish the rest. This was disappointing because as seafood lover, I was excited when I heard that the choice of soup would be a lobster bisque. This version was nothing like a bisque. It was neither rich, thick nor satisfying. 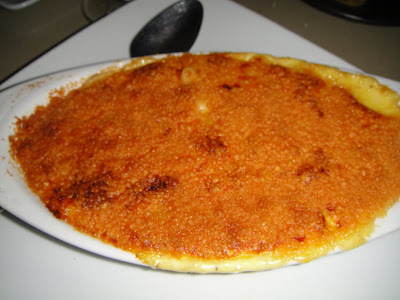 We also ordered a side of Mac & Cheese, which was not included in the meal special. Many rave about their Lola's Mac and Cheese. It is baked with cheddar cheese and topped with parmesan cheese. I actually liked this because coincidentally, cheddar and parmesan are the only two types of cheeses that I can tolerate. It does taste a little like Kraft's, which isn't necessarily a bad thing. Everyone else said it was too salty and nothing special.

Our entree came next- extremely quickly. We still had half eaten salads, soup, and mac and cheese on the table. Our waiter apologized. He explained that the mac and cheese came out too early- it was supposed to be served with the entrees. As a result, they rushed the entrees out as well. Not big deal, glad he explained. 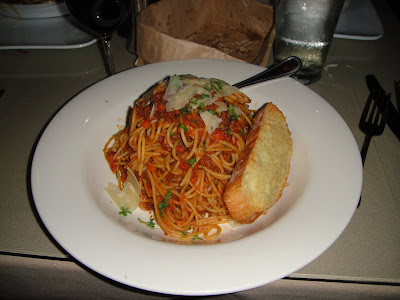 For our entree, Jho and I ordered the pasta. The bolognese was made with meat and a mirepoix of carrots, celery and onions. I thought the bolognese was rich and real comfort food. The carrots were a tad bit hard, as though they hadn't been cooked long enough, however it did not bother me. I liked the crunch. When I first took a bite, I wasn't too impressed. But as I got through the layers of the dish (first the mirepoix, followed by the meat and tomatoes, then the perfectly cooked pasta), I really began to appreciate the dish. Spaghetti bolognese can be a simple dish, but it is easy to mess it up. In this case, Lola's did a good job. I also enjoyed the garlic bread served with the meal. 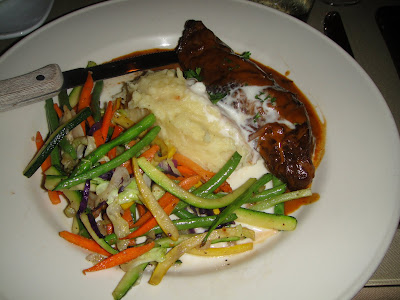 LB and Dilu got the short ribs. It was served with a parsnip puree and root veggies. Sounds great in theory, but I was disappointed that the ribs were not fork tender. Braised short ribs usually have a little fatty piece that makes the ribs tender and juicy. Instead this piece was a little tough and stringy. The portion was rather generous though.

There is a reason why Lola's is known for their martinis, and not their food. Everything was over salted. However their food is still a step up from regular bar food. In addition, for $24 you really can't complain.