Seafood that won't break the bank at Enterprise Fishco.

My dad is the kind of millionaire that still lives a frugal life. To illustrate, he only shops at Ross, and has been known to sometimes buy women's golf shoes if the price is too tempting. So it goes to say that like me, he is always on the lookout for great dining deals. One of his favorite spots is Enterprise Fish Company in Santa Monica. The restaurant specializes in seafood and has an awesome lobster special on Mondays and Tuesdays. $29.99 gets you a 2 lb lobster, complete with two sides. Although it won't be the best lobster you'll ever eat, you still really can't beat this deal if you are a shellfish lover.
This Monday, I met up with the family for dinner. The restaurant also has a relatively good happy hour and large screen TVs for sports games. It's rather crowded for a Monday night. What recession?
The menu includes mainly seafood items: lobsters, crabs, fish, crab cakes, oysters. There are limited non-seafood items such as steak and a burger. All entrees are served with at least one side, such as soup, salad, fries, mashed or baked potatoes, rice pilaf and vegetables. There is also a recession menu which includes soup or salad, a choice of one out of three entrees and a dessert. Actually one of the entrees in this menu looked the most appetizing to me, so I decided to go with it.
We started with cocktails, and bread was served shortly. 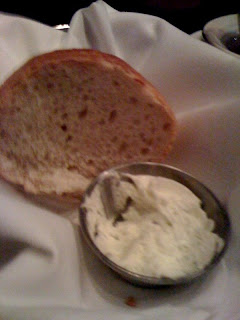 The bread was sourdough, and came with whipped butter. The butter was delicious. It was fluffy and easily spreadable. 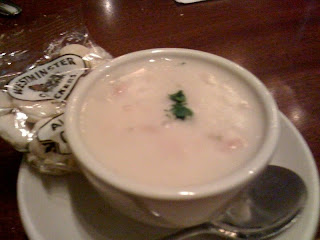 Most of us ordered the clam chowder as one of our sides. The soup was served in a small cup. Decent, lots of clams and a couple chunks of potatoes. Some reviewers on Yelp complained about the chowder, saying that it was not one of the best they've had. You kindda have to take the chowder for what is is: a side that accompanies your entree. It is, by no means, supposed to be the highlight of your meal. I thought it was a good start to the meal. 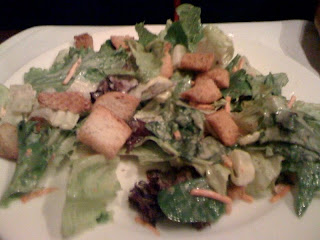 Some ordered salad, caesar in this case. 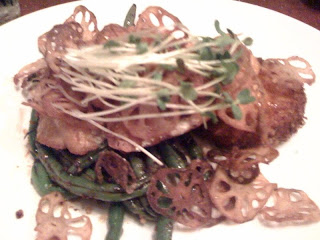 My entree was the sea bass with deep fried lotus chips, string beans and a risotto cake. The presentation was lovely. I ordered this fish because it was cooked in miso and soy, hence it would be relatively light. The sea bass was flavorful: a little sweet from the miso, and salty from the soy. I really liked this combination. Part of the fish was well cooked, but unfortunately another part was a little dry.
The beans were sauteed with chili and garlic, and was delicious. I liked the addition of the taro chips, which is something that you rarely see except in Chinese restaurants. It was interesting that the dish appeared to be asian inspired (with the green beans, miso and soy marinade), so I was curious as to why the risotto was on the plate. In any case, the risotto was absolutely mouth watering. It was shaped into a cake, covered with breadcrumbs, and deep fried. 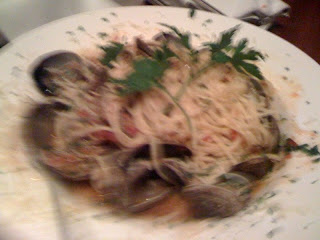 Another entree was the linguine with clams. It was a simple pasta, tossed with garlic and white wine. I'd definitely like to order this the next time I am here. 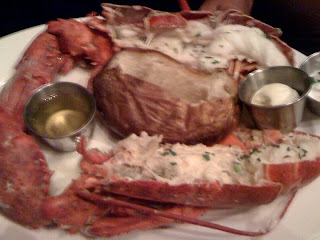 Most at our table ordered the lobster, which comes with two sides, and a side of melted butter for dipping. The lobsters were large and simply prepared. This dish is not complex at all, and really just showcases the crustacean. This is really one of the best ways to eat a lobster. Fresh, with just a little squeeze of lemon. You can get your fats and starch from the wide selection of sides.
My meal came with a dessert; choice of panna cotta, molten chocolate cake or creme brulee. My dad loves creme brulee so that's what I ordered. The creme brulee came in a single serving. It was creamy and topped with a layer or caramelized sugar and fresh berries. The custard was smooth, with a lovely vanilla flavor. I thought the dessert was delicious, and my sister who resides in Paris, home to many tasty creme brulees, concurred.
I'd like to reiterate that this is not the best seafood you'll have, but it's actually a pretty decent and economical meal. I mean, 2 sides with your seafood meal (with the exception of the lobster and steak), priced at less than twenty? If you are looking for something more upscale, head over to Providence or Palms instead. Otherwise, Enterprise Fish Co will do the trick. You'll definitely not leave here hungry, nor with a hole in your wallet.
Hits: Good prices, Lobster special, bar area for happy hour
Misses: fish a little dry
Rate: ***
Enterprise Fish Company
174 Kinney St.,
Santa Monica, CA 90405
(310) 392-8366
http://www.enterprisefishco.com/