I've been to Craft, Top Chef's judge Tom Colicchio's restaurant, in Century City. I had attended a company party in their private room when the restaurant first opened and amidst all the hype, I remembered walking away thinking that the food was great but not spectacular. When Craftbar was introduced a couple months ago, I was excited to try the casual, scaled-down version of the Craft franchise. The Craftbar menu is served tapas-style and every item is priced under $10. You are also allowed to order from the Craft restaurant menu, which we did.

The Craftbar space is luxurious with cabanas and couches on the outdoor patio, and tables in the inside bar area. B and I decided to sit outside since it was a beautiful day. It got a little chilly towards to end of the night and a busboy came by to switch on the heat lamps prior to our request. The clientele is mainly young, suited professionals who are most likely employed at CAA or the law and accounting firms in the nearby office buildings.

I had done my due diligence prior to dinner and looking at the online menu, the chicken wings, sea urchin panna cotta, suckling pig ballotine and liver mousse caught my eye. I was disappointed to find out that the actual menu was slightly different: no suckling pig, no chicken wings. 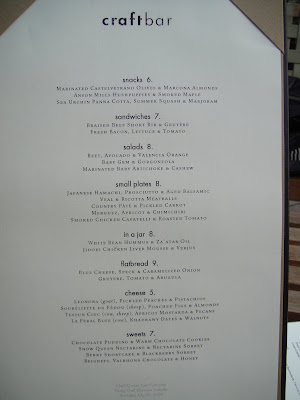 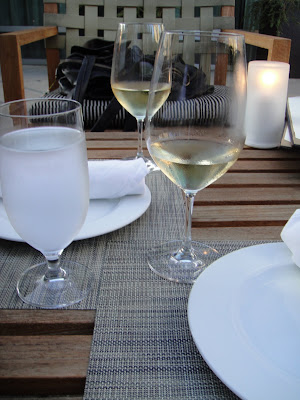 We ordered a bottle of Pinot Gris which was excellent. The waitress also kept the bottle chilled in the restaurant and would promptly refill our glasses as soon as it reached a quarter full. Now that's what I call good service! Since there were only a couple items on the Craftbar menu that looked appealing to us, we decided to share an entree from the Craft menu. The short ribs sounded like a good, hearty addition to our tapas selection. 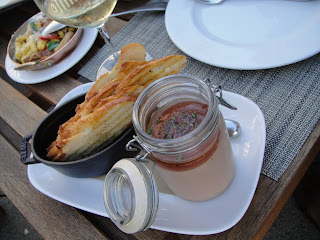 Jidori Chicken Liver Mousse with Verjus was served in a jar. This was a sizable portion that could have easily been served to one or two additional people. The liver was smooth, silky and tasted delicious, and it had a tart flavor which I couldn't determine the source. I later looked up verjus and as it turns out, verjus is made from green grapes and can be used in lieu of vinegar, hence the tart flavor. The crostini was toasted with a little olive oil drizzled on top. Our waitress brought over additional crostinis when she saw that we were running low and still had 1/2 jar of mousse left. 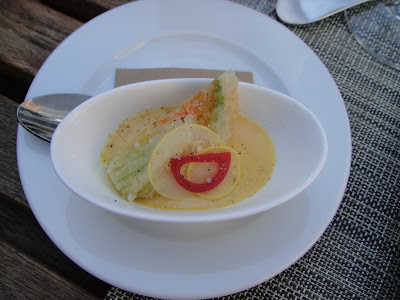 Our next plate, or rather my next (B doesn't like uni), was the Sea Urchin Panna Cotta with Summer Squash & Marjoram. The summer squash was fried tempura style. Wow, the dish was amazing. The panna cotta was infused with the fishy and yummy flavor of the uni. Since uni is so rich, it worked really well with the panna cotta which was light and creamy. 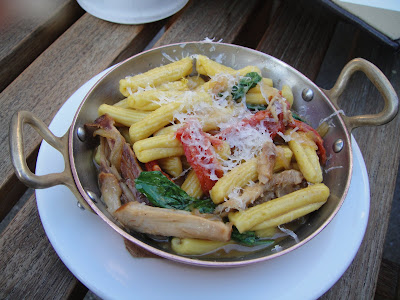 Our last tapas dish was the Smoked Chicken Cavatelli & Roasted Tomato. The pasta was cooked el dente and the smoked chicken was so tender. The smokiness gave the dish a great flavor. B really enjoyed this dish as she felt that it was simple and seasoned correctly. 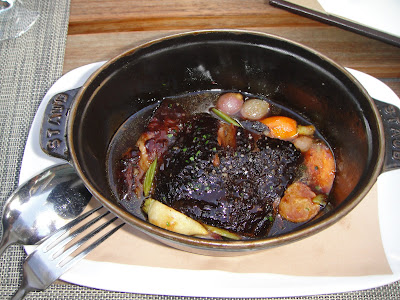 The Braised Beef Short Rib & Root Vegetables was the entree from the Craft menu. The short rib was served in an earthenware, with pearl onions and carrots. OMG, the beef was fork tender and was bathing in the rich sauce. It was a fairly large chunk of meat. The only critique I have is that I wish it was served alongside some carbs like mash potatoes or rice pilaf. If I had ordered this as my entree in the restaurant, I would like to eat the meat with something starchy. Otherwise, this was the unanimous winner of the night.

4 dishes and a bottle of wine later, we were too full for dessert. Being the doting wife that she is, B ordered takeout for her hubby. She got the flatbread with blue cheese, speck and caramelized onions. He loved it. 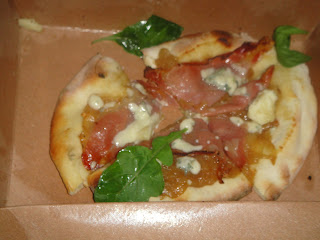 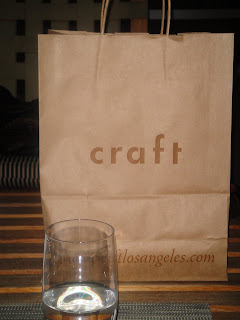 The bill came out to $116, including tax and the takeout flatbread. They also validate parking if you self-park, so resist the urge to valet (which costs $8).
I was very impressed with both the food and the service at Craftbar. It was all hits and no misses. I really have to comment about the impeccable service. Everyone (the hostess, our waitress, the bus boy) was attentive and very helpful. After yesterday's disappointing experience at West 4th/Jane, Craftbar is a nice welcome.