West 4th/Jane: I really wanted to like you, I tried... 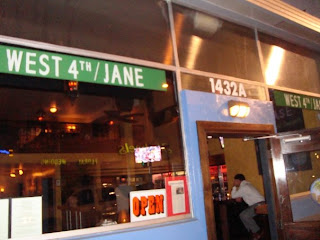 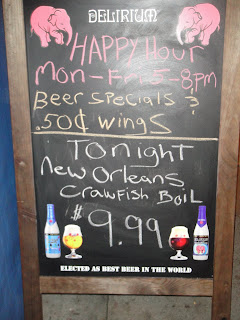 I was excited to hear that a new bar had opened in Santa Monica. I love the casual setting, coupled with the good food and alcohol of a gastropub. West 4th/Jane held so much promise. Located near the tourist trap that is the 3rd Street Promenade in Santa Monica, I could see it burgeoning into a popular joint for hip westsiders looking for a chill bar to call home.
G and Dilu joined me tonight for dinner and drinks. I haven't seen G in a while so I was excited to catch up. The outside of the bar is rather nondescript and it was relatively empty for a Wednesday post-work evening. Understandable for a bar that primarily promotes itself through word-of-mouth. The waitress came by our table to take our drink orders. She's pretty and skinny. Could be a model.
Dilu is always all about the European beers. The menu is extensive (all bottle and cans, I think) so she asked our waitress for advice. The latter was not at all familiar with any of the imported beers. Quoting Dilu verbatim, "She knew nothing about the beer. I asked about her thoughts on the Triple Karmeleit, she offered me the $3 cans of Miller light..". I understand that the bar is fairly new and the staff might not be familiar with every item on the menu, but Sorry! If you are working at a place that is supposed to be a gastropub, specializing in imported beers as advertised on their website, you should have a better suggestion than Miller Light! Diana settled for the Tripel Karmeleit ($10).
G and I were in the mood for sparkly, so we selected the Piper Sonoma Blanc de blanc ($9). About 10 minutes later, our waitress came back with the Tripel and said "Sorry, we are out of sparking water". duh! G and I said in unison "No.. sparkling WINE". She scuttled off again. 5 minutes later, she comes by empty handed and asks "which wine did u want?". FRUSTRATING! There was only one other table occupied in the restaurant at this time, and a couple patrons sitting at the bar who were being served by the bartender. Finally after all the confusion, she brought over the drinks. Piper Sonoma is never a letdown. Light and refreshing. 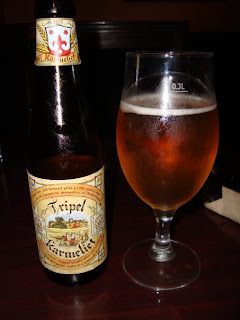 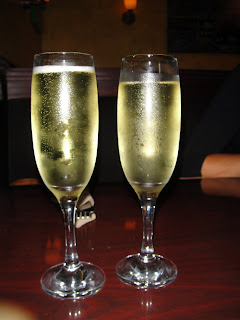 On to the menu, we asked what the happy hour specials were (it was 7.30pm at the time) and she responded "Happy hour ended at 7". Dilu said skeptically "Hmmmm it says 8pm on the chalkboard outside" (see photo above as evidence!). Waitress looked confused, which apparently isn't uncommon as we will soon discover as the night progresses, and says "Oh ok, maybe they changed it". So we ordered a plate of chicken wings from the Happy Hour menu. It came with 6 wings. Beware! It says 50 cents but its 50 cents per wing. She, of course never explained this to us when we asked but I am not going to gripe about this small discrepancy at all, I've got bigger fish to fry.. 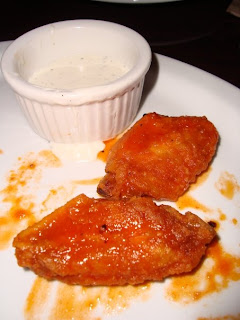 I ordered the "The All-or-One Hangover Sandwich" which the menu lists as "peppered turkey, cured meat, ff & fried egg" ($12). ff=french fries. I asked if there were any additional items that were not mentioned on the menu and I specifically asked if there was cheese or tomatoes in the sandwich. Can't stand either one of them. She said affirmatively "Nope, the sandwich comes only with whatever is listed on the menu". Turns out, there WAS cheese and it was smothered all over the fries. I was annoyed since I LOVE french fries but I couldn't even have a single bite of it. I just wished that if she didn't know the answer, she would just ask the chef or manager, instead of taking a wild guess and hoping that it would come out right. To make matters worse, I was underwhelmed with the sandwich. The cured meat and turkey looked like something that came from the grocery store (not even the fresh deli kind, but rather the prepackaged kind). See before and after pictures below; I couldn't even eat the meats because they just tasted slimy. Perhaps the saving grace of the dish was the bread (it was nicely toasted) and the fried onions which were thin and crispy. 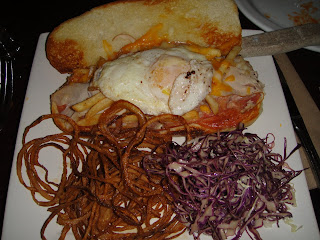 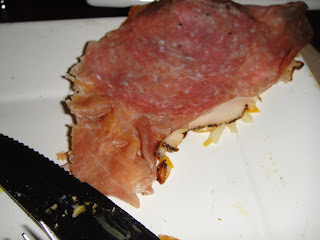 G and Dilu ordered a burger each. It came with cheddar cheese, crispy onions, tomatoes and lettuce ($9). The patty was not well seasoned and when prompted, Dilu had ordered it medium rare but it came out medium. Some reviewers compared it to the Father's Office burger; Apparently, it doesn't come close. I personally cannot eat the F.O burger because of my cheese-issue, so I cannot comment on the comparison, however purely from a visual standpoint, the F.O burger wins hands down because the patty looks juicier, and the burger is served with caramelized onions. Dilu ordered caramelized onions on her burger which cost her an additional $1. 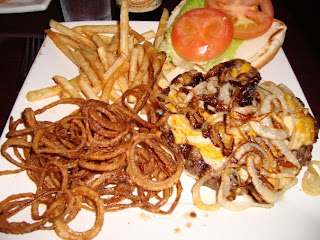 The last dish was one that we shared: the much-talked-about bacon crusted french toast ($10). In my opinion, it was perhaps the best dish of the night, however I am not sure if it was genuinely amazing or if it was because the rest paled in comparison. "Bacon crusted" didn't seem to be the correct description, it was french toast sprinkled with bacon. In any case, it was simple and delicious. 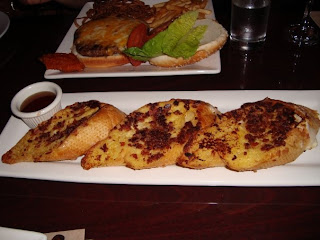 G & I also ordered second drinks. Another sparking wine for her, and the Louis Jadot Chardonnay for me ($9). The bill came up to $104 excluding tip, which is very reasonable. After all, most of the food items were less than $15. Naturally, I was tempted to give the waitress a less than 20% tip but I couldn't bring myself to do so.
I am really hoping that they work out the kinks because I would love for this to be one of my favorite westside haunts. I love their concept of creating a neighborhood joint, serving good quality beers and food, and promoting local artists. The food menu looks interesting (I'd like to try the mussels and schnitzel some time) and the wide selection of beer is always a plus. Word of advice: please hire knowledgeable and competent staff especially if you are positioning your restaurant as a specialty beer and food haven. I still have high hopes for the bar, however I strongly feel that they need to focus their efforts on customer service, and educating their staff on the fundamental offerings of the establishment.
1432A 4th Street
Santa Monica, CA 90401
310-395-6765
http://www.west4thjane.com/

I'm visiting this place tomorrow for a work happy hour. Hopefully they've worked out some of the kinks. I want to try the mussels, and maybe the French. Nice write-up.

Good luck! I hope you'll have better luck than I did.