Every first friday of the month, Abbot Kinney's stores and galleries are open until 10pm. First Fridays is a big community event with lots of people roaming the blvd., music blasting from stores, and food trucks on the street ranging from sushi, bbq to the famed Kogi korean taco truck.
Primitivo
My friends Uday, Diana and I decided to start the festivities early with dinner at Primitivo, a spanish wine and tapas bar on Abbot Kinney. The restaurant is divided into a bar section at the front of the restaurant, a dining area, and an outdoor patio. It was packed and lively on a Friday night at 7pm. The menu is categorized between cold and hot tapas, ranging from $6-17. Cold tapas comprise mainly of salads, hummus and cheese plates. In addition, Primitivo has an extensive wine list. 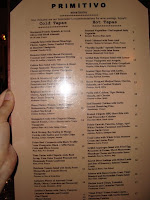 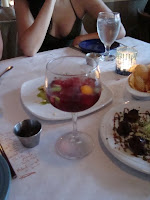 We ordered a pitcher of sangria which came in a large jug and was made with red wine, apples and oranges. There were probably about 6-8 pours per pitcher, quite a good deal for $30. 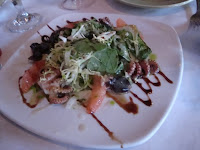 Our first tapas dish was grilled Baby Octopus salad with lemon thyme vinaigrette, arugula, watercress, fennel and grapefruit segments. I liked the grapefruit which gave the salad a light and fresh taste. However this was our least noteworthy dish as the flavors were not robust. I did however like that there were quite a few pieces of octopus. 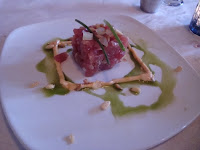 Next came the Tuna Tartar with Chipotle Aioli, Basil syrup, Yuzu gelee and Toasted pine nuts. I am not a raw fish lover so I only had a nibble of this. Presentation was simple and the tuna tasted like it was of a good quality. I can't speak much for the dish but my friends loved it and said that this was their top 2 of the night. 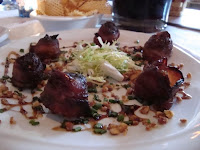 Our next dish was the Bacon wrapped Medjool Dates with Chorizo, Balsamic, and Candied Walnuts. This was hands down our favorite of the night. They were bite sizes that you could pop into your mouth for a lovely sensation. The date was creamy and sweet, and it paired excellently with the saltiness and crispiness of the bacon. I enjoyed the balsamic reduction as it worked very well with the dates. 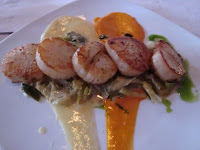 Diver Scallops with melted leeks and duo of rosemary infused tomato coulis came next. The scallops were perfectly cooked, nice and brown on the exterior and tender in the interior. The leaks were soft and well seasoned. I did not care for the tomato coulis, however I do not care for tomato purees in general. 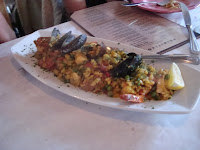 Our last dish was the Paella with Chicken, Tiger Shrimp, Mussels. and Chorizo. Personally, I liked this dish as it had amazing flavors. There was ample seafood and the rice was so delicious. Uday however, compared it to Uncle Ben's.
Five dishes between three hungry diners was more than sufficient. We contemplated on getting a dessert (I've had their bread pudding duo before and it was excellent), however we wanted to save our stomachs for the ice-cream truck or stores on the street.

Afterwards, we started bar hopping and headed over to Lilly's next door. I've been to Lilly's before for brunch and dinner. Good french food, great patio. We got seats at the front of the bar area which is a good spot for people watching. The bar section was crowded and it is good to see that the AK establishments are benefiting from this monthly event. As we were already full from our tapas feast at Primitivo, we decided to sample from their bar menu. We ordered a trio of oysters that came with a glass of wine, the terrine of duck and two glasses of their Sparkling Rose Marquis de la Tour. 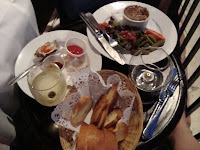 The appetizers came rather quickly, as Diana and I waited for our Rose. As it turns out, we ended up waiting over 20 minutes for our wine which was quite disconcerting. When it did arrive, it was lukewarm. The oysters were very good and fresh, however the wine that was paired with it was extremely sweet and difficult to drink. The duck pate was also a little disappointing. It was hard and hence difficult to spread on the crostini. There was also an odd flavor, something that I can't quite put my finger on, but it was a little sour. What a downer after an amazing dinner at Primitivo. We got our bill and made a dash, hoping to find some redemption for the night.

Afterwards we walked along Abbot Kinney and checked out the galleries and stores. We stopped into Topo ranch to catch a band play. At this point in the evening, the sidewalk was getting congested, although not as manic as the prior month. Apparently this months event was a little more "toned down" as a result of last month's frenzy. I could notice the difference: the woman dancing and hula-hooping on the street was missing this month.

As it drew closer to midnight, we made one final culinary stop. Kogi truck. We were in line for only about 20 minutes or so; I had expected worse. Afterall, we waiting in line for much longer last month and finally gave up. I ordered two tacos: Spicy pork and Korean Short ribs. They were $2 each and could be eaten in two small bites. I preferred the pork taco because it was bursting with flavor and was juicy and delicious.

Fun Friday night out. Come out next month to support our local merchants!