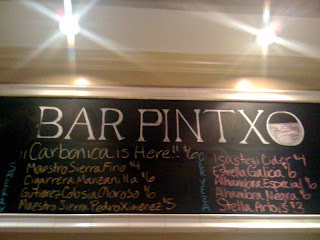 Each summer Thursday, the Santa Monica Pier hosts free concerts from 7-10pm. Bands jam on the pier while spectators either watch from the pier or on the sandy beach below. Last night was African themed and the band showcased was Thomas Mapfumo and the Blacks Unlimited. We went to a brief wine tasting on the Pier (sponsored by Wally's Wine in Westwood with wines from Kunde Sonoma, Zamora Spanish wines and Yellowtail. $2o gets you 5 tastings, one full glass of any wine that you favor, a cheese and cracker spread, and a nice cordoned-off-area to hang out).

After wine tasting, we wanted to grab a light dinner and more drinks. Spanish tapas came to mind. Bar Pintxo on Santa Monica Blvd by Ocean Blvd. is the perfect place. The restaurant is owned by Chef Joseph Miller, who also owns Joe's Restaurant on Abbot Kinney. I've walked by Bar Pintxo a couple times last year when it first opened and it was filled to capacity (apparently, that's 30 people). You can't make reservations so your best bet is to get there before happy hour, or after the happy hour crowd has dissipated. When we arrived at 8.30, there were still four spots open at the bar. The space is small, which is similar to the tapas bars in Barcelona. 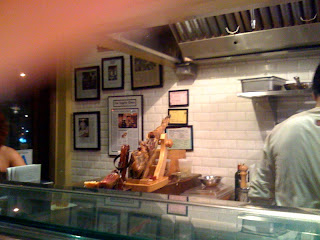 There is a jamon carving station at the side of the kitchen. 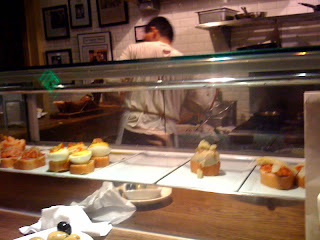 Our seats were facing the small kitchen, with a display of tapas in front of us. There was also a blackboard with specials written in chalk. We ordered two items from the specials (octopus and paella), and a few other plates of tapas. All the items on the regular menu, except for the jamon iberico, were priced under $10. All the tapas except for a select few (the foie and the bluecrab) are served with two pieces. 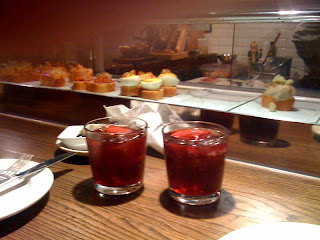 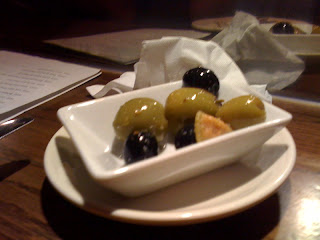 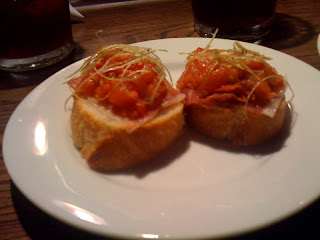 Our first dish was Jamon sofrito and fried leeks. The menu listed leeks, but as it turns out, the leeks looks like they were more for decorational purposes. You couldn't taste any of the leek flavor in this dish. Instead, the stewed tomatoes seemed to be the main component, even though it wasn't listed on the menu. In any case, I thought that this was a nice little bite but I don't think it was anything exceptional. 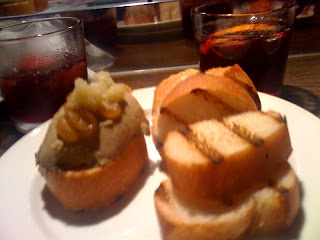 Parfait of Foie, caramelized onions and apples. This came with one piece and is perfect to share as there was a lot of foie on the bread. OMG, the foie is absolutely rich and divine. The only downfall was the bread; it was over-charred and you could taste the burnt flavor. 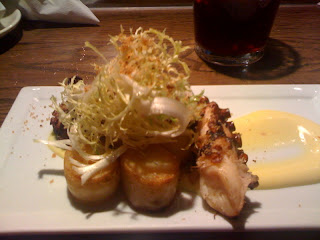 Another from the specials: Coca pintxo. This is octopus with potatoes and a light salad. The octopus was cooked perfectly; it had a clean flavor and was not at all chewy. The potatoes were firm, freshly fried and well seasoned. They had a little sweet taste, similar to that of a sweet potato. The aioli on the side had a good flavor as well. This was an excellent dish and probably our favorite of the night. 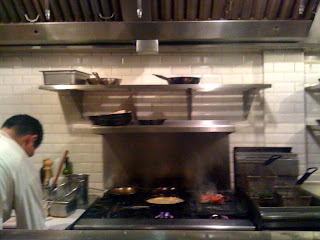 We watched closely as the cook prepared our paella. 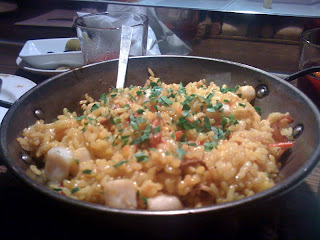 Paella with bacon and scallops. This was another item from the specials. The rice was flavorful and the scallops were plump. If you got a piece of bacon in your bite of rice, it would taste magnificent. However if you didn't have bacon in your bite, it would seem to be missing some salt. The crunchy pieces of rice on the bottom of the paella skillet was absolutely delightful. 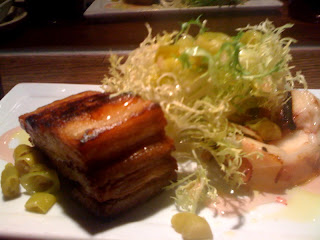 Last but not least, Tocino con melocotones; crispy Pork belly with grilled peaches and peppers. We watched as the cook seared the pork belly on all sides, and prepared the accompaniments. The pork was succulent and tasted sweet, like it had been stewing in maple syrup. The fatty pork went well with the frisee that was tossed with a light dressing. The heat from the pepper/pimentos gave this dish a little kick. I also liked the grilled peaches; sweet with a grilled flavor. We did notice that the grill needed to be scrubbed because you could still see the buildup of burnt remnants from prior items on the grill. 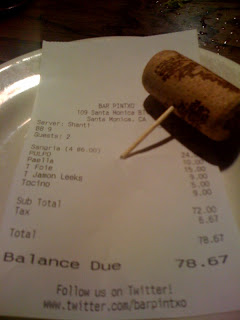 Bar Pintxo is really a little gem amidst the tourist trap that is 3rd Street Promenade. The food is authentic and tasty, and the setting is intimate.
Hits: The Specials, octopus, paella, foie, ambiance, walking the cooks do their magic, location
Misses: besides the dirty grill, nothing at all!! A+
Rate: ****
Bar Pintxo
109 Santa Monica Blvd
Santa Monica, CA 90401
(310) 458-2012
http://www.barpintxo.com/