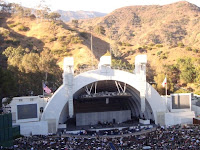 Last night, my friends and I attended one of the summer concert series at the Hollywood Bowl which is a quintessential summer event in Los Angeles. The Hollywood Bowl is an outdoor amphitheatre that is home to the Los Angeles Philharmonics and is the venue for many concerts. During the summer and at the Bowl leased events, concert goers are able to picnic at the site and bring in food and alcohol.

I packed cold sesame noodles, a recipe of Tyler Florence from the Food Channel (recipe below), cheddar cheese spread and crackers, whole wheat french loaf and a bottle of Pinot Grigio. The rest of my party brought more wine, bruschetta, prosciutto, hummus and crackers, and fresh fruit. 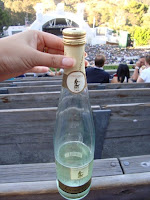 We were at the Bowl to see Death Cab for Cutie, Tegan and Sara, and The New Pornographers. Now, I know when you hear the name Death Cab, you automatically think.. snoozefest. The reason I decided to attend this concert was because I knew that this would be interesting due to the fact that they would be performing with the LA Philharmonics. I am also a huge fan of the opening bands. Lastly, being able to picnic at the venue makes for a great concert experience, and less expensive too! 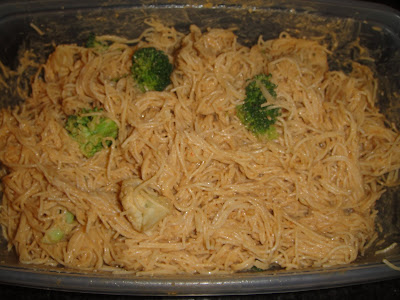 The noodles turned out great, in my opinion. I used whole wheat pasta; the original recipe called for buckwheat noodles. The pasta was al dente and the peanut sesame sauce had a little spice to it from the chili sauce, and sourness from the rice wine vinegar. I'd love to make this recipe again, perhaps throw in some chicken or Chinese BBQ pork. I also ate a couple slices of prosciutto, wrapped around a slice of french loaf. It was simple yet delicious.

After 3 bottles of wine and an array of food, the night ended with a spectacular display of fireworks as Death Cab played their song Transatlanticism with the Philharmonics jamming in the background. 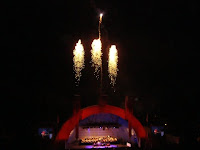 Bring a large pot of salted water to a boil over high heat. Add the noodles and stir to keep them from sticking together. Cook until barely tender and still firm, 3 to 4 minutes. Drain immediately and rinse under cold running water to cool. Drain the noodles really well, transfer to a wide serving bowl, and toss immediately with 3 tablespoons of the sesame oil so they don't stick together. While pasta is cooking put vegetables in a steamer basket over a large pot of water and steam it for 3 minutes.
Meanwhile, make the sauce. In a saucepan, heat 1/4 cup sesame oil over medium-low heat. Add the ginger, garlic, and chili. Cook, stirring for a minute, until the vegetables are soft and fragrant. Place into a blender along with the brown sugar, peanut butter, vinegar, soy sauce, hot water, chili sauce, and the remaining 2 tablespoons sesame oil. Puree and refrigerate until cold.
Toast the sesame seeds in a dry skillet over medium-low heat until golden brown. (Shake the pan constantly to keep the seeds from burning). Put the noodles and vegetables in a serving bowl and toss with the sesame sauce. Sprinkle with the sesame seeds and green onions, and serve with the lime wedges.
Serves 4