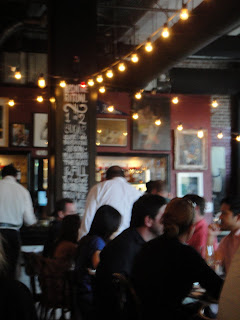 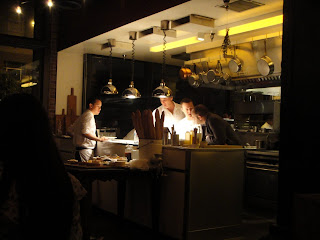 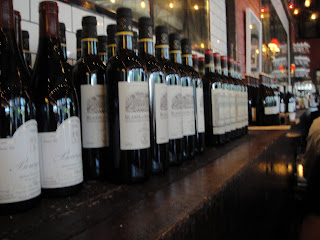 Church and State has been on our list for a while. It's just hard to get me to Downtown LA for anything. I suppose on a weekday, its about 8 miles from work: still outside of my 5-mile-radius-bubble but oh well... it better be worth it! The restaurant is owned by Steven Arroyo of hip Spanish tapas joint Cobras and Matadors. The chef is Walter Manzke, from the recently shuttered Bastide. I had just read up on Jonathan Gold's review on their pig's ears. He said it was the best he's ever had. This is reason enough to make the trek.

The restaurant is located in an industrial area; I had mistakenly thought that it was in the center of Downtown, near the Staples Center. If you are not paying attention, you might miss it. It is in the loading dock of a biscuit factory. As I drive by the building, I am wondering.. Where is the valet? We are in LA after all.. Ok, I guess I'll have to park on the street and there aren't any open spots around the entrance. I'll have to park further down. Hmm, kind of dangerous for a female to be walking on a secluded street in Downtown. Quick, scuttle to the restaurant. The neighborhood is kind of dead, but the restaurant inside is the exact opposite. It is a lively, bustling bistro with an open kitchen concept.

I had reservations for 7pm. When we arrived, we were seated right away. I ordered a glass of sparkly (Francois Chidaine Brut) and LB ordered the French Maid; cucumbers, mint, brandy, fresh mint and sweetener. We had thought that the brandy would be too overpowering, but you could not really taste it in the drink. That's a good thing! 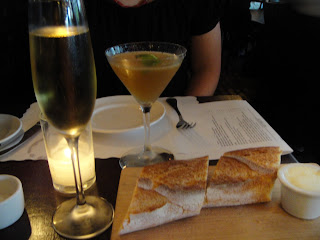 Bread was quickly served. It was fresh: nice crust and warm inside. The butter was soft as well. I thought this was excellent, in fact, I ended up eating 3 pieces throughout the course of dinner. In addition, the busboy would bring us additional bread without being prompted. 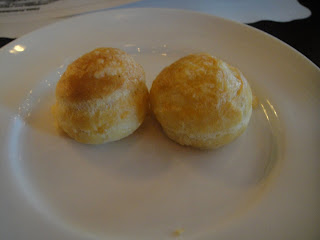 Our waiter brought over our amuse bouche: gougere. Simple, airy, delicious.
The menu is more extensive than the online version. Thank goodness, because the pig's ear wasn't on the online menu. LB and I decided to forgo entrees and instead, ordered a bunch of appetizers to share. In hindsight, this was an excellent choice because we were able to taste most of the items on the starter menu. 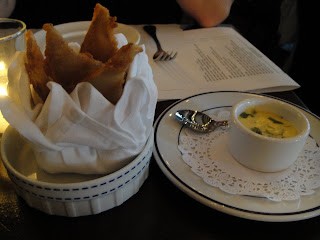 First up, Oreilles de Cochon (Crispy pig's ear with a bearnaise sauce). I had imagined that the pig's ear would be chewy and crunchy, like cartilage. Instead, it was cooked for a long time and as a result, it turned a little soft and gooey. I loved the contrast: crispy on the outside, and soft in the inside. You really didn't need the bearnaise sauce; the ears were rich enough as is. It was delicious and I wished there was more than two pieces each.. I think this was my favorite dish of the night because it was unique and mouthwatering. It's a pity most people are turned off by the thought of eating pig's ear, because they are really missing out. Oh poor pig's ear, you are so misunderstood. 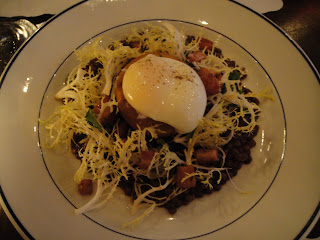 Our next dish was also pork-based. Pied de Cochon (Pork feet, shoulder, cheek). This was yet another excellent dish. The pork was mixed together, similar to a crab cake, covered with panko and fried. It is topped with a poached egg and sits underneath a frisee salad with lentils and lardons. We burst the egg and the yolk started to bind everything together. When you take a bite of the pork cake, all you can taste is a soft, buttery, melt-in-your-mouth explosion of pork. This dish was well executed. The frisee was lightly dressed, the lardons were chunky, and the lentils were firm and gave the dish a nice crunch. Another novel dish. 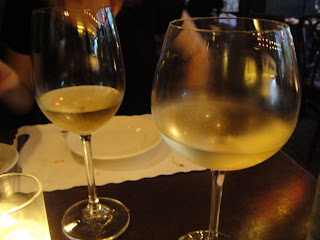 We also ordered two glasses of wine, recommended by the sommelier who was trying to pair them with fried, fatty appetizers. Domaine Jomain Bourgogne Chardonnay and the Reisling Domaine Roland Schmitt Glintzberg. 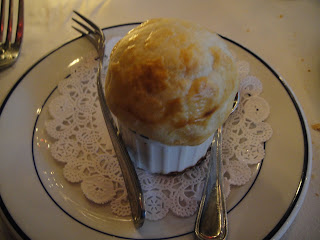 Escargot de Bourgogne. They are usually served in an order of 5-6, however we asked if we could only get an order of 2, since we only wanted a taste of it and would rather save our stomachs for other dishes. Our waiter was very accommodating. The escargots are served in a ramekin (one snail per ramekin), sauteed with butter, parsley and garlic, and topped off with puff pastry. Alongside was a tiny fork and spoon. I liked how they included the spoon as well, which came in handy when scooping up some butter over the puff pastry. The snails came hot out of the oven, and they smelled and tasted buttery and delicious. One ramekin per person is sufficient because it is rich with butter; although for a brief second, I had hoped there were more. 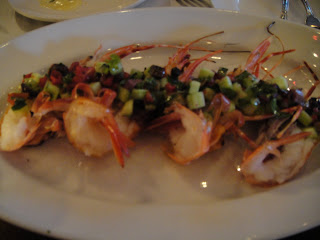 Next up was the Santa Barbara spot prawns. It came with cucumber, olives and some gunky thing on the prawn which looked like sun dried tomatoes. Although the prawns were cooked well, I did not like the nicoise. The olives lent a sour taste to the dish and I don't like mystery ingredients on my plate. 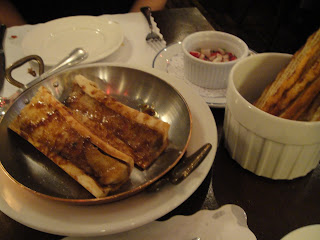 Ahh.. redemption.. Roasted bone marrow. The bone marrow was split lengthwise and served marrow side up. The presentation was simple, but lovely. It came with a side of radish and crostinis. I initially thought that the radishes were more of an afterthought, however it work really well with the marrow because it added a crunch and bitterness. I pretty much order marrow whenever it's on the menu and I thought this was one of the best that I've had because it was seasoned well. You could taste the beef flavor, the fattiness of the marrow and a little salt. I swear, if I was in the privacy of my home, I would have licked up the crevices of the bone. So good and yeah, so rich... 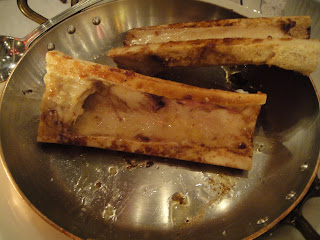 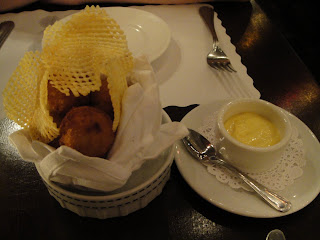 Our last savory dish was the Fried Cod, with potato gaufrettes and saffron aioli. We liked the potato waffles because it was crispy, delicate and salty. In the words of LB, the cod on the other hand tasted like a heavy, doughy fried ball of filler. All you could taste was potato; I could barely taste any cod. Furthermore, it was not particularly well seasoned, which is incongruent with the rest of the flavorful dishes that we have had. We didn't even eat all of the cod balls, which is very unlike us. It was a little disappointing to end our meal with the cod balls; I would love to have ended a plate prior, with the scrumptious bone marrow. 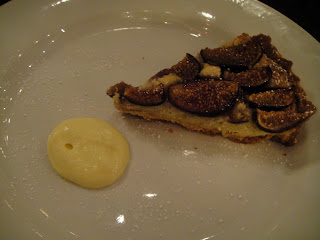 Lastly, dessert. Although the chocolate desserts are always appealing, we decided on the Fig Tarte du jour. Something different, and I love figs. The tart was served with a honey and muscat sabayon, and the crust was buttery and tasted like shortbread. The tart filling was dense and the figs were sweet and a little gooey. A good dessert and it wasn't too rich an ending for the night.

Overall, a great dinner at Church and State: well worth the drive to the obscure part of Downtown LA. The dishes that we selected were definitely on the fatty side. Thank goodness I surfed and went for a run this morning... I can see why they have received rave reviews. I would definitely come back again, perhaps try something off the entree menu but will definitely get the pig's ear and trotters again.

The service was good as well. Our waiter came by occasionally to ask how our food was, the sommelier/manager gave good wine recommendations and the busboys promptly cleared our finished plates and refilled our water glasses. The dishes were paced well; we never had more than one plate on our table.