Italian and star-sighting at Giorgio Baldi 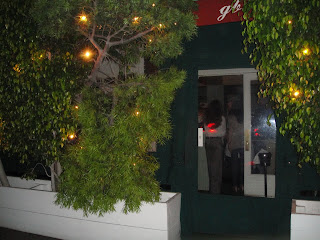 To kick off a Saturday night out, my friend Heather and I headed over to Giorgio Baldi on the Pacific Coast Highway, at the border of Santa Monica and the Pacific Palisades. I've never been so I was excited to try. Giorgio Baldi is an old school Italian restaurant, that seats only 61 people. We had reservations for 8.30pm and when we got there, every seat in the house was filled. From researching online, there appears to be mixed reviews. Several complained of the price tag and the service, saying that waiters are a little condescending and unaccommodating. However, most raved about the food.

The interior of the restaurant is dim and cozy, with tables placed close to each other. The patrons are older, with an occasional table of mid-thirties. The restaurant supposedly is a celebrity haunt due to its seclusion (away from the bustle of Beverly Hills and Hollywood). Sean Penn was there last night and when Heather dined there last, she sat right beside John Mayer. Since the restaurant had such an intimate setting, I did not want to be too obvious with the camera so I disabled the flash. As such, the photos are not spectacular.
We ordered a bottle of Prosecco Bisol Cartizze di Baldobbiadene ($72). It was a good bottle, however I'm not sure if its worth all of $72. After all, Prosecco is typically more affordable than most other sparking wine (specifically champagne), and you can usually get a really good bottle at a $40 range. 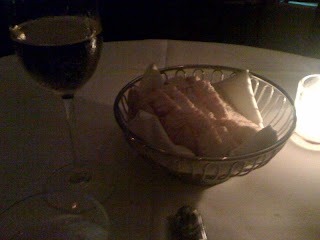 The bread was nothing special. It was not warm, and was not served with butter or olive oil. We had to ask twice for the olive oil. Not a big deal.

Heather was advised by friends to order the dinner specials if possible. There were a few appetizers, pastas, meats and seafood on the specials menu. Pasta sounded good, and there was a page full of it on the regular menu, which our waiter told us are small, appetizer portions. We decided on an appetizer and entree each. 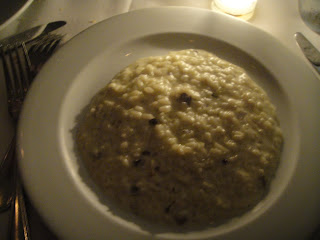 I started with the risotto, with porcini mushrooms and truffle oil, from the specials ($25). This was my favorite dish of the night. The risotto was cooked perfectly al dente, and it was creamy and decadent. The truffle oil gave the risotto such a rich flavor. Based on the photo above, the plate might look large, however the risotto was spread rather thinly on the plate. A great appetizer to share, definitely not enough food for an entree alone. 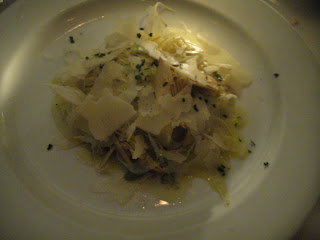 Heather ordered the Artichokes with fennel in olive oil and lemon ($18) from the regular menu. The artichokes were thinly shaved and the licorice flavor of the fennel was a good complement to the artichokes. 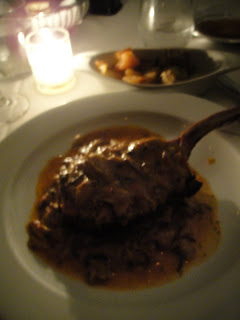 For my entree, I ordered the veal shank with porcini mushrooms ($40). This was such a delicious piece of meat; I loved how it was served simply with a bone, caveman-style. The meat was soft and juicy, as though it was braised for hours. 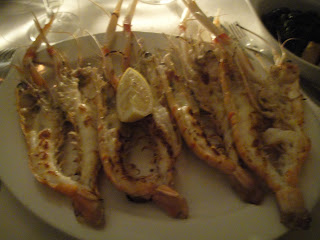 The other entree was the Langostines with lemon and butter ($42), yet another simple but well executed dish. Langostines are a type of lobster that look a little like a crawfish. There was a lot of meat in each langostine shell and I loved the charred, grilled flavor of the crustacean, with a little squeeze of lemon juice. 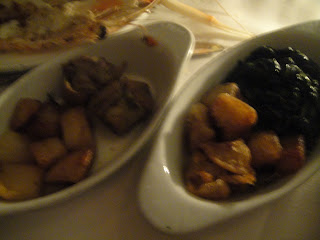 The entrees were served with sides of potatoes and vegetables. Good addition, but it would have been nice if they had asked us for our choice of sides, because I was served artichoke hearts, which I dislike. 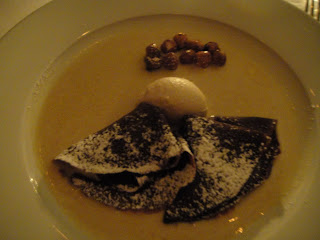 We ended the night with dessert: Chocolate Crepe with nutella, caramelized hazelnut and ice cream ($14). The crepes were thin, light and swimming in a sweet butter sauce.
The bill came up to $232 excluding tip. If we hadn't ordered the Prosecco, it would have been closer to $160, which is not too exorbitant for a high end restaurant. I thought the service was good as well: the bus boy would periodically fill up our glasses of water and our waiter was not available but not overbearing. Although the food was good, it wasn't one of the best Italian meals I've had. Still, I'd venture back in the Fall. I hear they have a special truffle menu then.