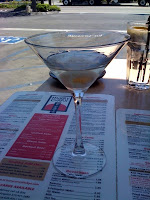 After a night of bar hopping and dining at Abbot Kinney, I was craving some hearty food such as curry. Hurry Curry is located in the Sawtelle area in West LA. There are numerous Japanese restaurants on the Sawtelle strip including ramen houses, sushi joints and Japanese tapas bars. I met up with Diana and Uday again this afternoon to celebrate our nation's Independence.

I started lunch with hair of the dog: a lychee sakitini. I am not a fan of sake nor martinis but the beverage sounded refreshing and was a sweet start to the holiday weekend. 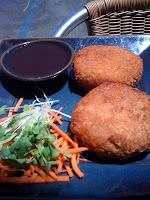 We started with the croquette appetizer which came with two pieces. The croquette is fried and made of potatoes, onions and minced meat. It came with okonomiyaki sauce on the side, which I don't particularly care for because it tastes like worcestershire sauce. In any case, the croquette was tasty on its own. 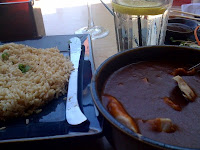 I got the chicken curry with brown rice, cooked spicy. The chicken was white meat and some came shredded, some came in chunks. Growing up in southeast asia, I have high expectations for curry. Unfortunately, I thought the curry was good, but not memorable. The chicken was rather tasteless which you would not expect if it was cooked in curry sauce. It seemed as though the chicken was merely stirred into the curry prior to serving, instead of being cooked and simmered in the sauce. 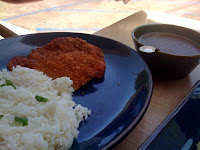 Uday ordered the chicken cutlet curry. Now, that was a tastier curry dish. After all, it is listed on the menu as their most popular dish. The chicken cutlet is breaded in panko, and was a generous portion. It was served with a side of rice and a bowl of curry sauce. I would definitely get this the next time I come back as it was hearty and not too oily. The Japanese sure do have a skill of serving fried food that is not heavy and does not taste overwhelmingly greasy. 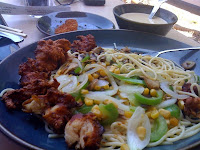 Diana ordered the chicken pasta. The menu did not do it justice; it was simply listed as pasta with sauteed mushrooms, corn, bell pepper with fried chicken in a white sauce. Firstly, the chicken was absolutely scrumptious. It was marinated in sake and was crispy on the outside, soft and tender on the inside. The chicken had a sweet taste from the sake, which made for a unique flavor. The pasta was cooked perfectly, and the sauce was rich and delicious. It was creamy and had a sour tang to it. Lastly, the plate was huge and could easily be shared between two people. Even after doling out some to the rest of us, Diana still had leftovers to take home.

Hurry Curry is a great place for quick and cheap Japanese comfort food. If you still have room in your stomach, head across the street to Beard Papas for some cream puffs.