You'd be hard pressed to find Southeast Asian food in the Westside, and my friends all know that I don't travel outside of my 5 mile radius, unless its for snow. Therefore, when I read up that Rocksugar was going to have a Singaporean cooking class, I signed up immediately. The cooking class covers 4 items on the menu, and wine pairing. I was so excited when LB wanted to attend as well. She did not have an inkling of what Singaporean food was, so I was excited for her to get a taste of it.

Normally you wouldn't think that Rocksugar would be an authentic Asian restaurant, after all, it is part of the Cheesecake Factory family that is known for its huge portions of all-American fare. I've had dinner at Rocksugar when it first opened, and I was pleased to have Singaporean and Malaysian food available in the area.

Rocksugar is located at the Century City Mall. When you first enter the huge wooden doors, you are welcomed into an outdoor patio. Perfect place for grabbing drinks or a small bite. The patio is absolutely trendy. 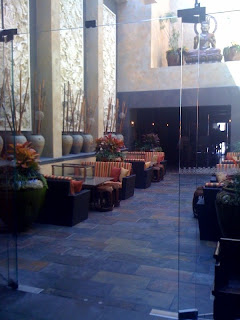 The decor of the dining room is gorgeous. It is ethnic and you feel transported into the dynasty times. 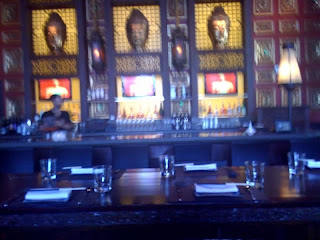 We were guided into one of the dining rooms, where a portable burner and cooking prep area had been set up. Chef Mohan Ismail is standing by to greet us. We will quickly discover that Chef Mohan is an entertaining and comedic performer. He is a Singaporean, who has worked with many famous chefs including Danny Meyer and three-Michelin-starred Jean-Georges Vongerichten. While cooking, Chef Mohan would share little anecdotes of life growing up in Singapore, and how food is such an important part of Singaporean culture. He also provided us with numerous cooking tips.
LB and I were a little surprised though, when we realized that this wasn't a hands-on cooking class. It was mainly the chef cooking, while the rest of us sat by watching. We were slightly disappointed because we were expecting to get our hands dirty. Perhaps this is what cooking classes are supposed to be like, however when we took a french cooking class a year ago, we were actually doing a fair bit of cooking. This seemed to us, more of a "cooking demonstration", rather than a cooking class. 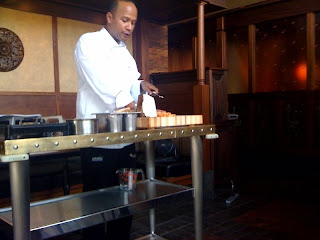 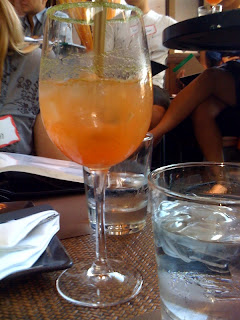 When the waiters brought us each a blood orange sangria, our eyes lit up. The color was beautiful and the glass had a rim of sugar with dehydrated kaffir lime. The sangria was absolutely delicious and refreshing. There was also a kaffir leaf in the sangria, which gave the drink a unique Asian touch. I'd love to make this for one of my summer parties. 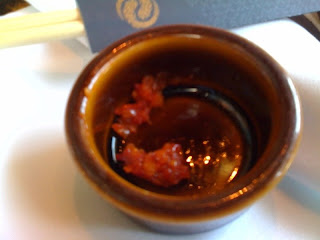 Chef Mohan started the cooking class by showing us how to make sambal chili. Sambal is a chili paste that is served as a condiment in Southeast Asia. I remember topping sambal on almost anything imaginable. It tastes delicious with white rice and a fried egg. 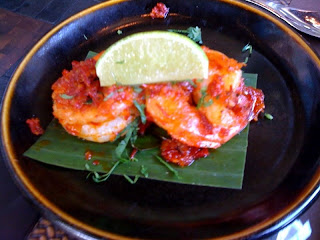 The Sambal shrimp was delicious, especially with a squeeze of lime over it. The shrimp was plump and the sambal was spicy. The presentation was simple but beautiful; the shrimp sat on a banana leaf. I also liked the tang of the rice vinegar in the sambal. This was such a familiar flavor that brought me back to my childhood. 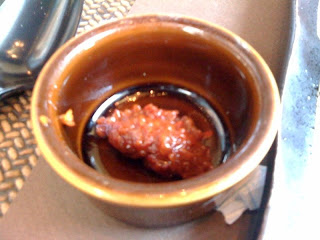 Chef Mohan proceeded to make another version of sambal but with a thicker consistency. It had the same base, but he added more ingredients. I really liked this version. It included fish sauce which smells a little funky but the salty taste adds some depth to the sambal. 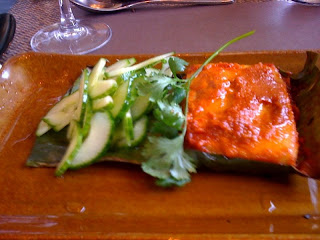 He used the sambal as a coating on the Chilean seabass. Boy oh boy, the seabass was delicious! It was so buttery and you could really taste the garlic in the sambal. I really enjoyed this dish because it was simple to make, but the flavors were incredible. He also made a side of pickled cucumbers. 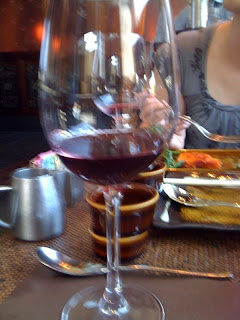 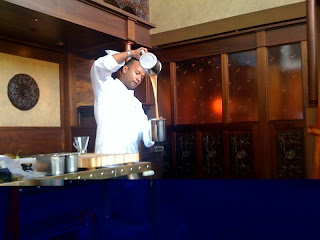 Next up was Tea Tarik, which is pulled tea. The ingredients were simple: tea and condensed milk. The challenging part was the pouring process. The fluids are poured back and forth between two tins. As a result, the tea mixture is frothy and light. I love condensed milk in anything, so I really enjoyed this drink. It is a little on the sweet side but is just a perfect drink to kick start your morning. 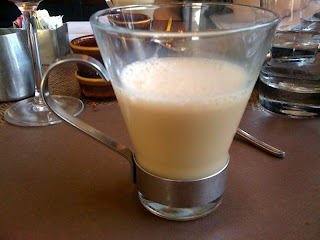 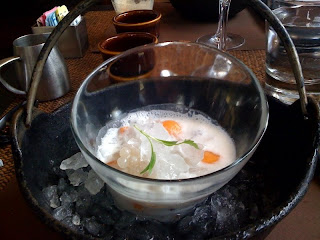 For our dessert, Chef Mohan made Bubur cha-cha, which is coconut milk with tapioca pearls and various root vegetables such as sweet potato and taro. The dessert was refreshing and milky, and the pandan leaf was aromatic. I also loved the tapioca pearls and am glad to have seen it recently in Western cuisine. You can customize this dessert by adding any type of ingredients such as red bean, jackfruit (photo below), jello and melons. This is a great summer dessert because it can be served cold: ours was served in a bowl of ice.
The bubur cha-cha was served with a glass of Moscato (2007 Saracco Moscato d'Asti). Dessert wines tend to be too sweet, so I was surprised that this was just right. It had a little fizz to it. 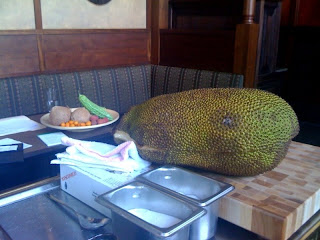 After our cooking session, Chef took us on a tour of the kitchen. It was nice to see that there was good rapport between the chef, the wait staff and the cooks. They acted like they were family and throughout the course of the day, I noticed that they were working very well with each other. 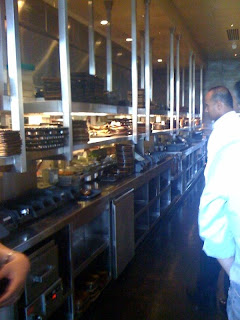 I had an enjoyable time at the cooking class. It was refreshing to learn about Southeast Asian cuisine, and to be brought back to my good ole days in Singapore. Two and a half hours later, we left with a slight buzz and a leather binder full of recipes from the day.
Hits: Blood Orange Sangria, the fish, Chef Mohan and his delightful personality
Misses: Should be promoted as "cooking demonstration" ("cooking class" can be a little misleading)