I've decided that I spend way more money in these recessionary times. After all, how can I resist all these restaurant promotions? Case in point. Whist's $25 Wine Lovers Night, where on Mondays and Tuesdays, all wine bottles are priced at $25 with purchase of dinner. Great deal? Sort of. With the exception of the butter lettuce, appetizers start at $14. Entrees are priced in the high-twenties to low-thirties. But I don't care, I want my Cakebread Chardonnay for 25 buckaroos.

This is my second time taking advantage of the wine lovers special. Last time was an absolute success (http://stuffycheaks.blogspot.com/2009/05/cinco-de-mayo-at-whist.html) I knew exactly who would love to partake in this special. With the exception of LB who sadly is spending way too much time in NYC for business, my dining companions tonight were my favorite gal pals (Heather, Dilu and G) who share my love for wining and dining. 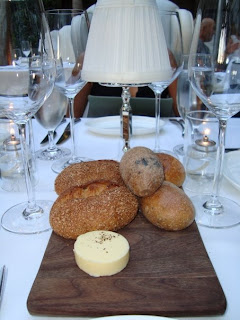 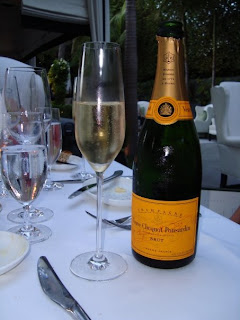 We started with a bottle of Veuve Clicqout, yellow label. Normally priced around $75 at most restaurants. $25 tonight. It tasted soooo good after a long hard day at work. I've recently taken to starting dinner with an aperitif, and the champagne hit the spot.
A variety of bread was brought over: wheat and olive amongst others. The bread was fresh and warm. Most restaurants really underestimate the importance of good bread. It is the first thing a diner puts in his mouth and it can set the tone for the evening if it is not up to standards. Good job, Whist.
Tonight, we decided to share two appetizers between the four of us. I've been to Whist a number of times so I've tried most of the items on the menu. Therefore, I let the ladies decide. 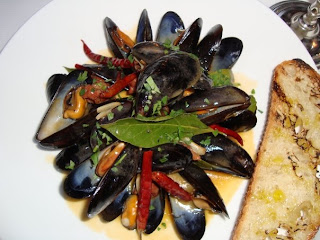 First up, pei mussels with lamb sausage, chili and marjoram ($15). Man, this was great. The broth was salty in a good way, and had so much flavor. There was only one piece of toast to sop up the sauce. If I was at home, I would most certainly have licked the bowl. The spice from the chili really gave this dish a kick. I thought the sausage had a very gamy taste but most everyone else loved it. 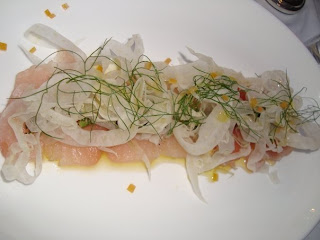 Our other appetizer was albacore tuna crudo, with olives, lemon, fennel and olive oil ($18). I've had this dish before and it is just ok. The crudo was fresh but under seasoned. It wasn't special and was not any different than what you would have gotten at another nice restaurant. We felt that if there had been more citrus or salt, it might have tasted better.

At this point, we had just finished our bottle of champagne and proceeded to order the Cakebread Chardonnay. To our dismay, they had run out. Our waiter said he'd give us a moment to review the wine list but he had a recommendation. When I chose the Leflaive 2005 Saint Aubin, he grinned and said that it was the same one that he had in mind for us. The Leflaive is a French Chardonnay from the Burgundy region. I love French Chardonnays. They are typically less oaky than the Californian ones. It was excellent. So crisp and smooth. And it was chilled perfectly. I am not sure how much this would normally cost in a restaurant but I believe it runs about $40-50 if you were to pick it up at the wine shop. 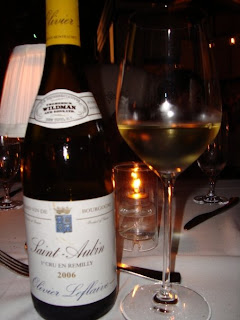 Our entrees came shortly after. 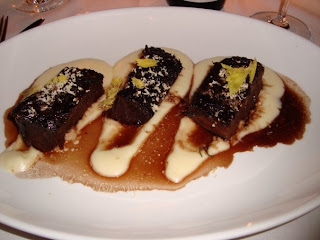 The braised beef short ribs with potato puree, horseradish and celery leaves ($28) was something that I've had a couple times before. I remember it melting in my mouth. This time however, some of the meat was dry and stringy. In addition, the mash did not have the horseradish kick that we recalled. I think in normal circumstances, this dish would have fared well. However our expectation were high and this time, the short ribs fell flat. 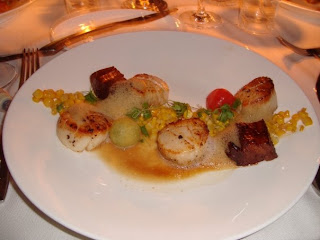 Diver scallops with sweet corn and slow braised bacon jus ($27) was one of my favorites. The scallops were perfectly cooked. The smoked bacon tasted like pork belly, yumm. My favorite part surprisingly, was the corn. It was sweet and firm, and really went well with a bite of scallop. 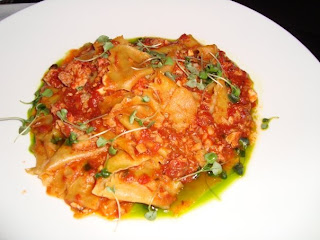 The lobster bolognese ($27) was mediocre. The pappardelle was over cooked and stuck to each other in chunks. The lobster was in small little chunks and the tomato sauce was ordinary. I think the dish would have been better if they had the lobster in bigger pieces for aesthetic purposes. 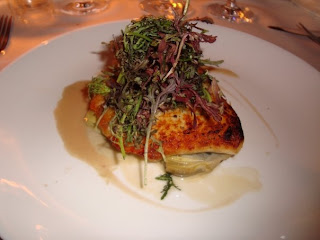 The fourth entree was the halibut with artichokes and mustard greens ($23). The halibut was flavorful. This dish was light and simple, but tasted good.

After our meal, we decided to share two desserts between the four of us. All desserts are priced at $11. 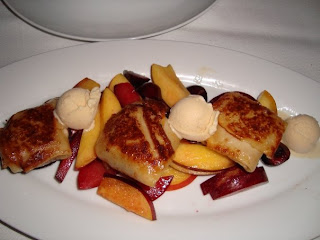 Our first dessert was the Summer Crepe. The crepe was well prepared: brown on the outside, yet soft inside. One issue was that there was too much dulce de leche in the crepe, to the point of over-sweetness. The caramelized nectarine ice cream was unique and delicious; it tasted like honey. Everyone loved the fresh fruit of nectarine, peaches and cherries. 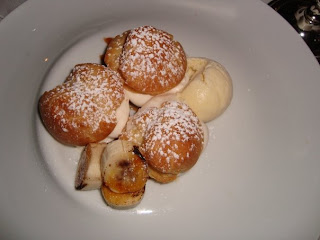 The second dessert was the Profiteroles with banana curd, toasted coconut ice cream and rum caramel. They were light and delicious too. I really enjoyed the ice cream as well. I liked how Whist went with uncommon ice cream flavors instead of traditional vanilla. 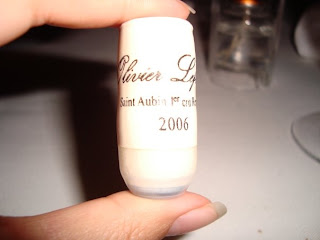 The bill was $275 including tip. At $68 per person, I thought this was a good deal especially since we ordered two really good bottles of wine. I really hope they don't cease the Wine special. I'd be saddened.

Hits: Mussels, scallops and most importantly, $25 bottles of wine
Misses: Dryness of the short ribs
Rate: ***