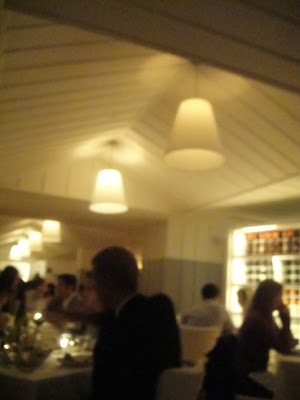 Asia de Cuba is in the Mondrian Hotel on Sunset Blvd., the strip that turns manic on weekends. The hotel's famed Sky Bar was the trendy hot spot circa late 90s-early 00's. The restaurant cuisine is Latin-Asian and food is served family style. For the dineLA special, if you have 3-4 people in your party, you get to choose 2 appetizers and 2 entrees to share, portioned appropriately. Each diner gets their own dessert. The food on the dineLA menu looked good so I suggested it to the gals.

I had a meeting that was scheduled late so I let the girls know that I would be running a 1/2 hour late and for them to start without me. Apparently when LB got there, the hostess was not very nice and gave major attitude, saying that it is not their policy to seat a party before all guests had arrived. Yes, I can understand that because you don't want a party to sit at a table and delay ordering. But if they were starting without me and I was just going to join them whenever I could (probably at the entree course), I don't see what their problem was. However when I got there (late), the lady at the front desk (obviously not the same person) was anything but mean. She was friendly and helpful. Odd how two completely different people were at the front desk.

Apparently service was slow because when I got there at 7.45pm (reservations were at 7pm), the appetizer had just arrived. Fortunately for me, I didn't miss anything. 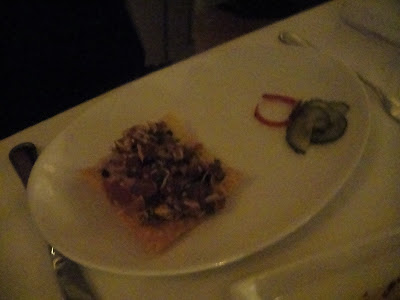 Tuna tartare. The tuna was fresh and the dressing was citrus and light. I liked this dish because I like fried anything, and that deep fried wonton tasted really good with the fish. Personally, I don't like olives so I thought the marinade had that sour, olivey taste. Otherwise, delicious. 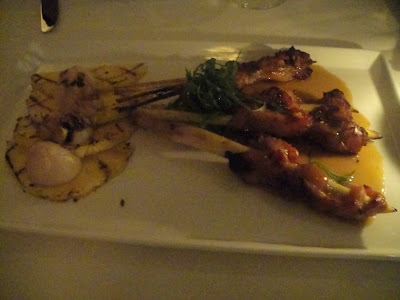 Chicken skewers. The chicken was marinated well and we couldn't decide if it was white or dark meat. It tasted as tender as dark meat but I thought it looked like white meat. I loved the lemongrass flavor and how the chicken was skewered on a lemongrass. The side of grilled pineapple and lychee was light and sweet. Good flavors here. Both Latin and Asian flavors are strong and distinct, and the influences definitely brought bold flavors to the dishes
Entree choices
- Miso Cured Alaskan Butterfish - Cuban And Black Bean Edamame Salad, Tempura Shisito Peppers
- Grilled Strip Steak - Gingered Chickpea Fies And Calabaza Melon Slaw, Citrus Ginger Soy
- Cuban Bbq Chicken - Thai Coconut Sticky Rice And Avocado Cilantro Fruit Salsa. Tamarind Sauce 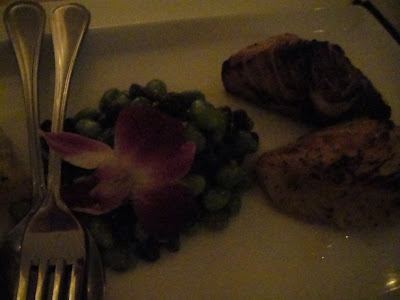 Butterfish was good but I feel like you can get it anywhere. It basically tastes like the miso cod that you can get at most Japanese izakayas. I liked the bean mixture but everyone else at the table did not; they said that the two types of beans did not compliment each other. I was just glad to get some greens in. 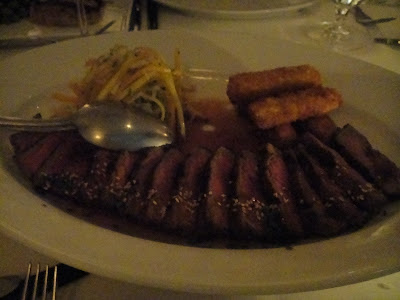 The strip steak was served in a huge portion. The steak was cooked perfectly but I was expecting stronger flavors in the sauce. I loved the sides. Papaya salad is one of my favorite Thai dishes, and the melon slaw looked exactly like it. The chick pea fries were freshly fried and the mashed up chick peas were soft and a bit creamy.

At some point during dinner, a female diner asked us if we had change for the meter. I only had 50 cents so I gave it to her. When I wouldn't take her dollar for my 50 cents, she surprised me by ordering me another glass of wine! Yeah, I know I gave myself a one drink max because I had to get in to work early the next day, but hey, it's a gift I can't decline.

Lastly, on to dessert.

We waited over 20 minutes for dessert. As it turns out, they were making the donuts fresh, so our waiter brought our cake out first. 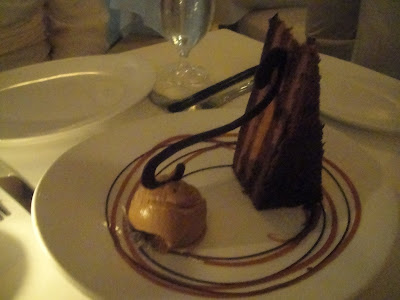 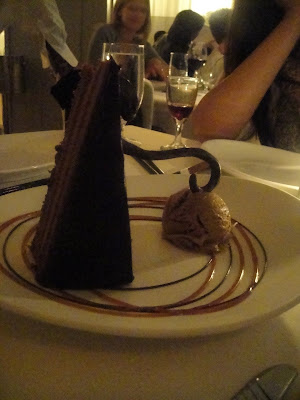 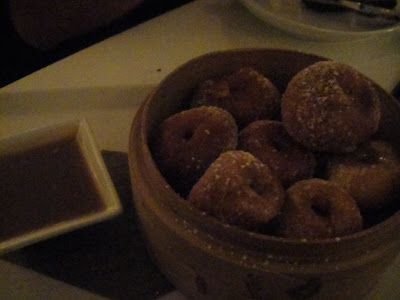 Mexican donuts. Personally, I really liked the donuts. It was warm, fresh and smelt of sugar when it got to the table. I must have gotten a great first donut because it was soft in the inside. The other ones were actually a bit overcooked and semi-hard. Either case, I liked it that way as well, I didn't mind the crunch.

So overall, I thought the food was good but the dineLA menu was not a good deal (and valet was $15, which already includes validation from the restaurant). Here, I'll show you..

Sigh, just yesterday I talked about my two dineLA criteria which I obviously didn't heed. Yes, the dineLA menu looked delicious. However, it was NOT a good deal, or rather it was not a better deal if you did dineLA vs. just dining at the restaurant on a regular occasion. I had another bone to pick with the dineLA menu. It stated online that each diner got a choice of their own dessert, however we were advised that we could only pick two between the four of us. Yes, even though I was full, it's really the whole principal of it all. A bit disappointing, I find. dineLA is supposed to give you a little taste of a restaurant, to entice you to come back and pay full price. Thanks for the heads up, I won't be back. I suppose one should know what you are getting yourself into if you are dining at a fancy, trendy, Hollywood hotel restaurant. Don't bother coming here for dineLA; save your cash and stomach for somewhere else.

Hits: my free drink! Food was good but not exceptional
Misses: Not a good dineLA deal at all, pricey valet, hostess with an attitude
Rate: * (for dineLA)