Some kinks but lots of potential @ 5th Amendment Alehouse 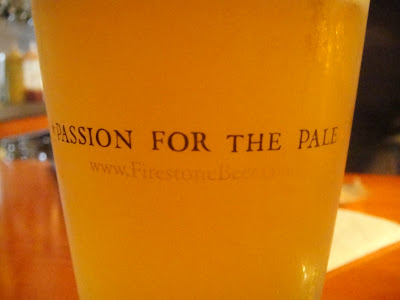 I had been waiting anxiously for the opening of 5th Amendment Alehouse for some time now. Eater La first reported that it would be opened in July but after a few delays, the doors finally opened in September. Located by the 3rd Street Promenade in Santa Monica, it took the space of Evergreen Tea House. I was excited; alcohol trumps tea. I have recently noticed that 3rd Street isn't solely a tourist hangout anymore. There are many bars that locals can go to, such as Copa d'Oro, West 5th/Jane and one of my favorites Bar Chloe, and good restaurants such as La Cachette Bistro, Anisette and Riva.
We went on a Monday for drinks and a little bite. The bar is owned by husband and wife, Eden Noe and Daniel Petrovich. There are about 20 beers on tap and another 30+ on bottle, which is a pretty darn good selection.

I left the bar with mixed emotions, just like that boyfriend that you can't decide whether to be disappointed with because he's messed up a couple times, or if you should just cut him some slack. They've only been opened a month so yes, there are some kinks. But I really do think there is something special here and there is a lot of potential for this place. Read on... 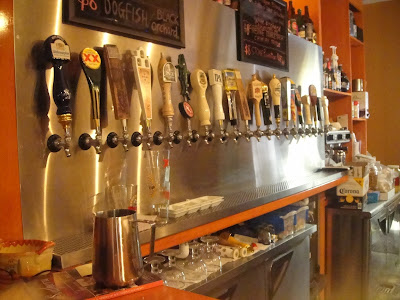 When we got there, it was relatively empty so we grabbed seats at the bar. Turns out, that was the best spot in the house because we were able to catch the attention of the bartender and was served relatively quickly. We ordered beers; the Mission Blonde (happy hour for $3) and a White Orchard. The Mission was light, golden with a nice citrus flavor. The White Orchard is a Belgium beer with a lavender/chamomile/ginger spice to it.
LOGISTICS:
Kink: When we first got there, it was stuffy and hot. And to top it off, it was terribly smokey. The kitchen needed an exhaust fan. We reeked of smoke while sitting at the bar and the smell lingered on even when I got home.

SERVICE:
Kink: The place was understaffed. There was one person working in the kitchen (Eden, the owner), and one bartender. Dirty plates and glasses were stacked up on the tables. Thankfully the bar was empty enough so no one was sitting at those messy tables. There was no wait staff. As a result, people had to order at the bar and I noticed on two occasions, two parties came up to the bar with money in hand, waited unsuccessfully to be served, then walked away pissed. Come on, it's a Monday! You should be able to get a drink pretty easily at a bar that is only a quarter full.

Potential: The bartender was very knowledgeable about the beers and gave some really good recommendations. He did explain that their waitress did not show up which was why they were understaffed. We later saw her strut in, and indeed service got better when she arrived. The bartender wasn't scrambling around doing the job of two, and even had some downtime to chat with patrons. He had overheard our conversation on going to Paso Robles this coming weekend for some wine tasting, and gave us some recommendations. 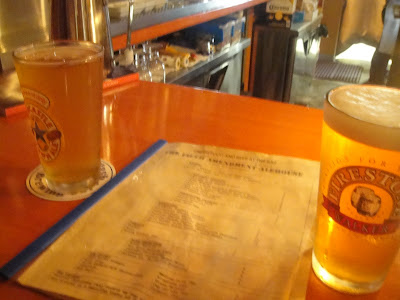 Next I ordered a glass of white; the Cupcake chardonnay.
Kink: There is only one white on the menu so if you wanted white wine, you were stuck with this. It was too sweet, and tasted like plum wine.
Potential: There are tons of great beers to try, so save the wine craving for another day. Our bartender also said that they may add more wines to the menu down the line.

I saw an alligator sausage on the menu that sounded interesting. I had an awesome crocodile pizza at this wonderful pub in Sydney and it wasn't scary at all, so I was certain that alligator would be somewhat similar. We ordered that and the veal sausage. 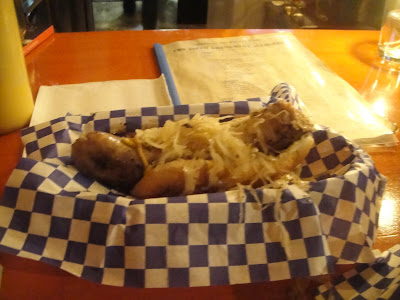 The alligator andouille was interesting. The sausage meat was red in color, similar to veal or beef. I had expected the alligator meat to be light colored like its reptile cousin, the crocodile. It was spicy, flavorful but a bit oily. The hot dog bun got soaked in oil in a matter of seconds. I did not like the sauerkraut but that is just a personal preference. I have to say that at least the sauerkraut looked fresh and not the kind you would find in a jar from the grocery store.

Kink: Bartender brought out the rabbit and veal sausage instead of the veal with basil, tomato and mozzarella.

Potential: The rabbit sausage was actually really good. It tasted like a juicy Polish dog.

Kink: After our sausages were half finished, he brought over a bowl of pretzels. Sorry, he said, it should have come out sooner. Yeah, I would have liked to have had the pretzels with my beer while I was waiting 30 minutes for the sausage.

Potential: He apologized. And I understand... they were understaffed, the last thing on his mind was pretzels.

Next, I wanted to try their llama burger. I've had llama before and remembered it being very lean. After the greasy sausage, the llama might be a nice change.

Kink: They ran out! Eden, who was working in the kitchen, explained that they had ran out of the llama meat on Sunday and she didn't have time to go to the butcher today. Humph... honestly, there were only two burger selections on the menu (llama and Bison). Don't you think you should make it a point to stock up on one if it runs out?

Potential: At least they keep their ingredients fresh.

Kink: Eden asked if I wanted elk or venison instead. I'll take the elk then. I was curious as to why they would keep elk and venison patties in the kitchen but not list them on the menu. Wait a minute, I wondered, they have elk and venison sausages, did she mean that she would substitute the burger with sausage. That can't be right. If llama burger ran out, wouldn't the 1st thing you would recommend be the bison burger? Burger for burger? Perhaps she would take the elk meat out of the casing and make it into a patty? I decided to clarify with our bartender who said don't worry, it would be an elk burger. Thankfully he double checked with the kitchen because a few minutes later, he retracted and said that it was going to be a sausage after all. WAIT! Hold the sausage. I just had a sausage, I want a burger! I decided on the kobe sliders instead.

We ordered additional beers.: Allagash White and Ballast Point Yellowtail. The Allagash was pretty well rounded. The Yellowtail is from San Diego and was a bit bitter, but delicious. 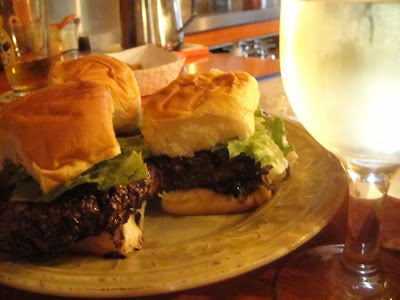 Kobe beef sliders. It comes with cheese and lettuce.

Kink: Really greasy and oil was soaking into the bun. As the oil was dripping all over my hands, I noticed, no napkins! Grrrr..... The meat was good, but it definitely needed some seasoning, and the fat should have been rendered a bit more.

Service was obviously an issue here. This was the main complaint on Yelp, although my experience seemed better than those that went last month. So on the bright side, it looks like improvements have been made. While I was quietly sipping my beer at the bar, a customer was fuming and got into an argument with the bartender. He said that the bar was telling a lie when they advertised that happy hour beers were $3, when there were only about two selections. He had a point. The advertisement was misleading; When stating that happy hour was from 6pm to 2am, it sounded more enticing than it actually was. Also, the beers ran out pretty fast, so happy hour hopefuls are only left with one choice, if any. Our bartender also forgot our orders on a couple occasions; he forgot what beers we got, and also when it was time to pay the tab, he asked us what we had ordered. I should have lied and said "1 beer and 1 sausage" but alas, I am that honest...

Eden, who works the kitchen, is knowledgeable about the food. She picks up the meat from the butcher and you can tell from the menu that the variety is unique.

I like it here. Yes, there were definitely issues- miscommunication, forgotten orders, greasy food. But most of these can be rectified with proper staffing. Once there was an additional hand at the bar, the service got significantly better. And although the kobe sliders were greasy, the sausages were good. Despite the service hiccups, I really liked the staff. They were friendly and really nice people. This place definitely has potential because the staff has passion and knowledge unlike when I went to neighboring bar West 4th/Jane a while back. Come here for the wide beer selection. And if you are hungry, sausage is the way to go. I'd like to come back in a couple weeks (Actually, I'm supposed to be there on Friday); hopefully the kinks will have been ironed out.

Greetings from Los angeles! I'm bored to tears
at work so I decided to check out your site on my iphone during
lunch break. I enjoy the information you present here and can't wait to take a
look when I get home. I'm shocked at how fast your blog loaded on my cell phone .. I'm
not even using WIFI, just 3G .. Anyhow, awesome blog!
Look into my web-site my Site