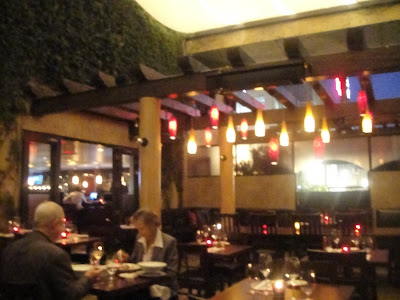 Why are Top Chef finals mostly upsets? Do the front runners always choke, or were the underdogs always #1 but Bravo TV filmed the episodes in such a way to throw off viewers? I see some trends here; seems like the underdog wins almost every other season.

Season 1: Alright, Harold rightfully won.
Season 2: I thought Marcel should have won. Well, lucky Angelenos can taste his cooking at Bazaar (the best restaurant I ate at last year), and also at Breadbar Hatchi on December 17, which we just procured reservations - see you then!
Season 3: Yes, Hung deserved it too
Season 4: Although Stephanie was a sweetheart, Blais was spectacular. I thought he should have won
Season 5: Despite his arrogance, I thought Stefan was the most skilled chef in the group.


If this trend continues, we're due for no upsets this season, so season 7 winner would be Kevin (although I secretly want stud Michael V. to win...)

Stefan Richter was the cocky Top Chef finalist from Season 5. I actually thought he was excellent, of course I had never tasted his food, but he seemed to be on top of most of the challenges and his dishes were creative. So when I heard that he was opening up shop in my neighborhood no less, I was estactic. Stefan is Finnish by birth, but grew up in Germany. LB and I spent a week in Finland last Fall and I remembered a lot of vodka (alcohol is the country's #1 killer!) and reindeer. Stefan's food definitely leans towards German but interestingly, his menu is so much more contemporary. Joining me for dinner were Stefan and LB.

Stefan's LA Farm took over the spot of Califonia-French restaurant, LA Farm. I had never been but LB was a fan. It is located in a semi-secluded area on Olympic Blvd in Lantana Center, that houses production offices . You had to take a ticket to park in the center, but if you self park, it's actually free after 9pm (the ticket booth guy leaves at 9). So take your time at dinner if you want free parking. The restaurant space includes an indoor dining area and bar, and an outside patio. The decor is modern and trendy, and the music is great (think old school rock). The menu includes small plates and entrees. The small plates were actually more like little bites; we were advised by our waitress to order one small plate per person as nothing is really big enough for sharing. 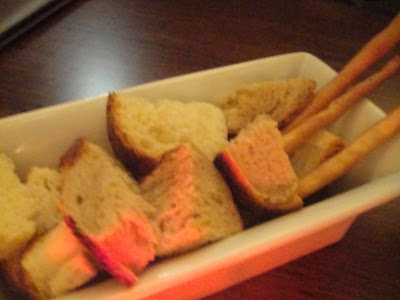 Bread came out, which included rustic, sourdough and bread sticks. The butter was seasoned.

Ordered a round of drinks
- Grape Collins; Gin, sour cocktail, grapes. It tasted like a watered down limeade
- Finnish me off: Finlandia tangerine, triple sec, peach tea, fresh lime and cranberry. I liked this drink, it was refreshing. It is served in a martini glass, is a nice orangey color, and looks like something that Carrie Bradshaw would drink
- Wild Lemonade: Wild turkey and lemon 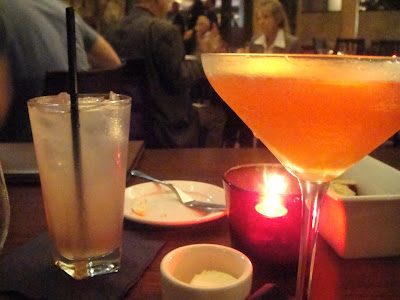 We proceeded to order a couple little plates. 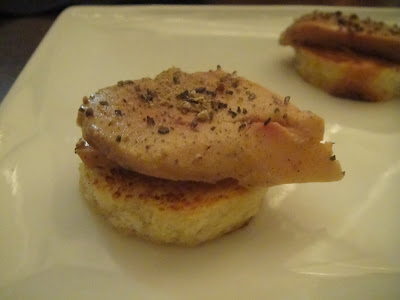 Sonoma Foie gras with cracked white pepper, smoked salt and griddled brioche.
This came out almost immediately after we had ordered our dishes; a bit suspicious. I liked the salt on the foie but I thought that it had a bit too much pepper. The brioche was perfectly toasted, buttery and crispy. I liked the foie and thought it was rich and a nice size. LB thought it was too pungent. 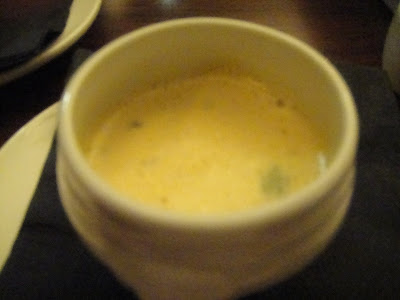 Thai lobster bisque with coconut milk and lemon grass
This was my favorite of the small plates. The bisque was spicy and creamy, and I thought the coconut flavor added a richness to the bisque. I also loved the lemongrass, which had a distinct flavor and aroma.

While we gave our orders for our small plates, our waitress asked if any of us liked oysters. We had already read online that the oysters were sub par so we deliberately did not order it. The waitress kept insisting that we order it. It's sooooooooo good, she said. Alright, perhaps the reviewers had a bad batch, so LB decided to give it a chance. 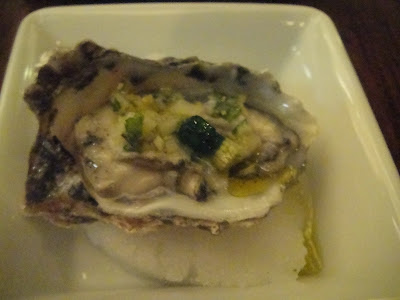 Kumamoto Oyster with absinthe jelly and fennel vinaigrette
The oyster didn't taste fresh. It was so fishy that LB couldn't even taste the other ingredients. 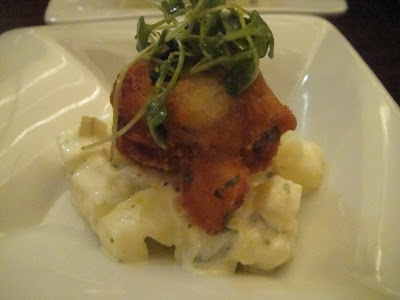 Sweetbread schnitzel with potato salad
The schnitzel seemed to be deep fried instead of pan fried. The batter was hard and dry, which sort of overwhelmed the dish; I couldn't really taste the sweetbread. I think it would have been fine if I had thought I was eating a chicken nugget, but knowing that sweetbread was the main component of the dish but yet could not taste it, was really a waste. The schnitzel was served on top a potato salad which I thought was too sour due to the pickles.

An issue I had was that the wait staff would pick up plates without even asking if we were done. Now, I am a pretty fast eater so it wasn't like I was sitting there for a long period of time and not touching my food. I literally looked at my phone and when I looked back up, my plate was gone. This happened a couple of times, the first was when my lovely bisque was taken away even though I clearly still had quite a bit left that I was savoring. Well, I suppose at least their service is efficient. 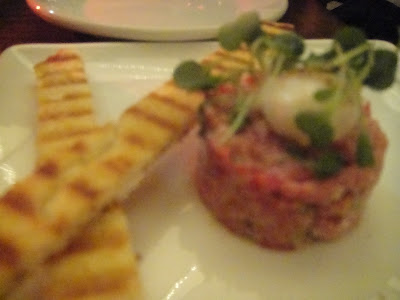 Beef tartare with poached quail egg and bread stick
The meat was fresh and just the right texture (not too coarse and not too fine). It was also seasoned well. Stefan also liked the quail egg that was perfectly poached. 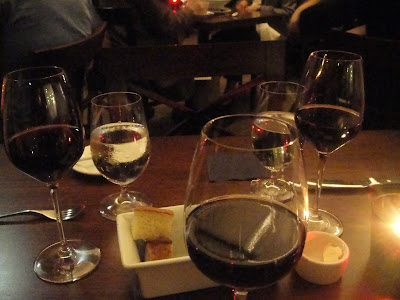 For our entrees, we asked for wine recommendations. A full bodied Grenache was recommended for the duck, and the Pinot Noir for the lamb. They were both excellent. 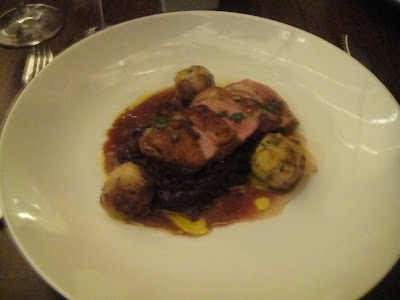 Duck breast with braised red cabbage and dumplings. The duck was perfectly cooked, but personally, I don't like sauerkraut and I thought the sourness overpowered the duck flavor. The dumplings were delicious and LB commented that they were very authentic German. 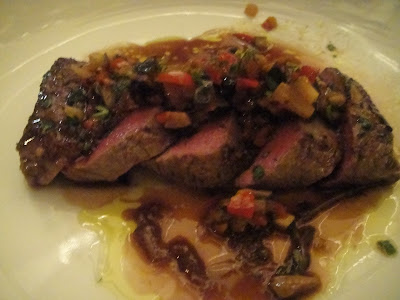 Lamb loin with ratatouille and polenta. The lamb was tender and not gamy. I enjoyed this dish as well. It made perfect sense that the meat dishes were excellent, after all the Finns and Germans are really good with game meats. 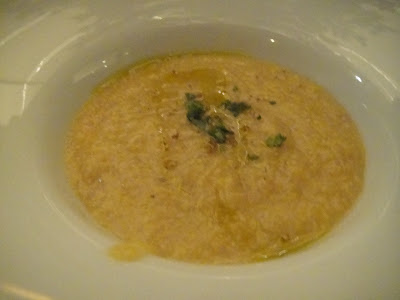 Our waiter brought over a bowl with a tagine-looking cover. Ooooh what was under that? I was excited to see that it was the polenta that was served with the lamb. OMG, it was absolutely mouth watering. The polenta was cooked perfectly, was rich and appeared to have some truffle oil drizzled on top. I finished it in a matter of seconds.

So, off to dessert. Our same waitress raved about dessert. "Everything is amazing". Should we trust her after the oyster misjudgement? Alright, another chance then. 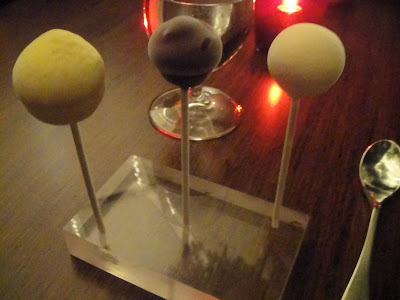 Trio of lollipops; eggnog, chocolate with wine, and passion fruit. This totally reminds me of the liquid nitrogen that all the "cool" chefs were using on Top Chef. However the lollipops were hard; they did not burst in your mouth like what you would expect. Instead, the inside was hard like ice cream and a bit painful to bite. Perhaps it was over frozen? It was still delicious, but I think it would have been exciting if it actually burst in your mouth. 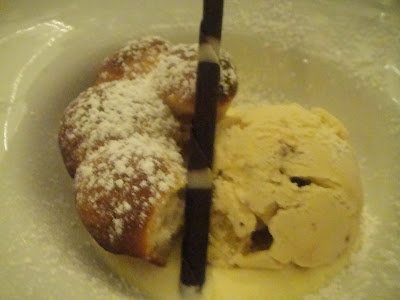 Buchteln with maple pecan ice cream and creme anglaise. The ice cream was delicious and I loved the crunch from the pecans. The buchteln was lovely as well, it tasted like a pretzel.

I quite enjoyed my meal at Stefan's. The small plates were fun and was a perfect start to the meal. The meat selections were delicious and well prepared. The small plates were on the more delicate side, while the entrees were heavier comfort food. I was eyeing the mushroom ravioli with foie sauce. Think that will be next on my list.