A night in with Jose Andres 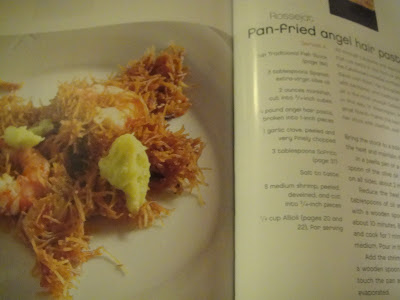 My friend LB is such a perfectionist when it comes to cooking. She has to make her own dough and pasta from scratch, and buy the best ingredients. So when she invited me over for dinner on a weeknight, I knew she was going to be slaving in the kitchen all day. The theme was Spanish tapas, with the main dish rossejat. The inspiration for the theme was because I had sent over a recipe for rossejat and she realized that she had a different variation from her Jose Andres cook book. She decided to cook some items from his cookbooks (recipes below). We were also celebrating her trip to Spain this weekend.

Spanish Rossejat or Fideua is pan fried noodles in a paella pan. I've had the rossejat at Jose Andres' The Bazaar Restaurant and it was absolutely flavorful and delicious. I like it better than paella (if that's even possible!) because the noodles are thin and absorb more of the broth without being too heavy. 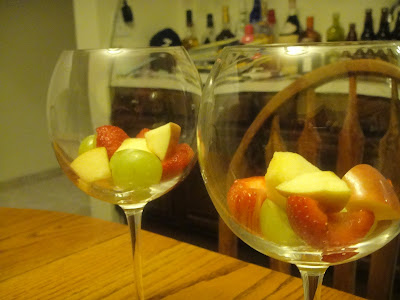 The fruits include strawberries, apples and these huge mutated grapes. 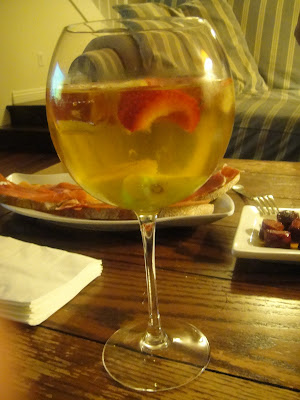 Sangria with sparkling wine. This was delicious and refreshing. You could tell the hint of vanilla. We ended up making another pitcher with Chardonnay as the base. I liked the sparkling better.

LB decided to make a few tapa dishes and the Rossejat for entree. 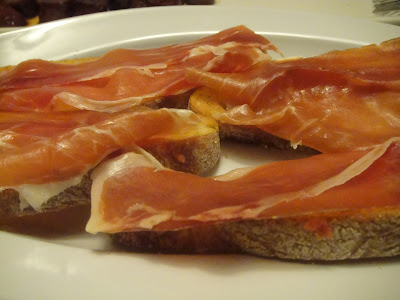 Serrano ham on fresh rustic bread. I love cured ham and it's just a lovely way to start a meal. Serrano has a bit more intense and cured flavor than prosciutto. The bread was rubbed with tomatoes and drizzled with very good olive oil. I could be happy just eating this all night. It's simple but addictive. 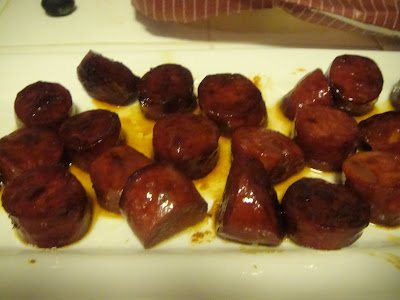 Chorizo, pan fried. The chorizo had a heavy and strong flavor. It sat around a bit too long so it got a bit hard. This is the type of dish that you should eat right after cooking. 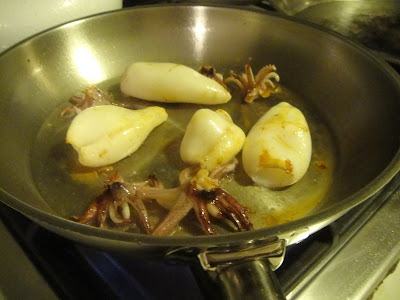 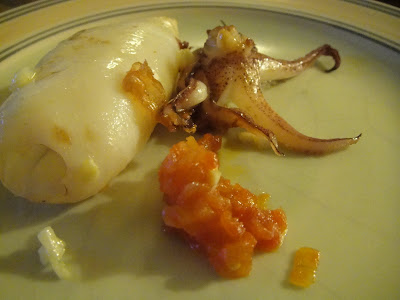 Fresh calamari with sauteed garlic and sofrito
LB made sofrito for the fideua but decided to set aside some for the squid. Sofrito had to be stewed for about an hour. Onion had to be grated by hand, and tomatoes and onions were simmered for an hour. So, it's pretty labor intensive but it went really well with the mild tasting squid. The calamari was tender and fresh, and in big pieces. The sofrito tasted a bit like like marinara sauce but smoother. Simple but so much flavor and you can really taste the simmered onions in the sofrito.

I watched as LB prepared the main course. But I did refill her drink and made another batch of sangria. 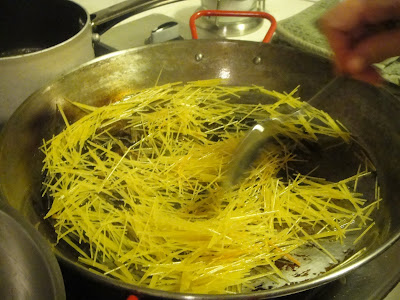 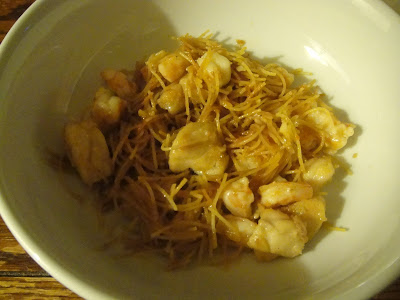 She cooked the monkfish and shrimp, brown the pasta, then add the liquids that would be soaked with the noodles. Finally, she combined everything and used a broiler to crisp the top noodles while the noodles underneath were still wet and absorbed all the liquids. I have to say that this was mouth watering and satisfying. The noodles had a very strong seafood flavor which was from the seafood broth, which of course was not the canned broth from the grocery store but from Santa Monica Seafood Market. Yes, everything had to be perfect. The noodles had really concentrated flavors of the seafood essence, and the shrimp added a nice sweet flavor to the salty dish.

Last but not least, dessert. I had wanted to pick up a Tres Leche (Spanish!) cake from Emil's Swiss Bakery in the Westside but when I called in the morning, they didn't have any. Instead, LB grabbed some desserts from Paris Bakery in Westwood. 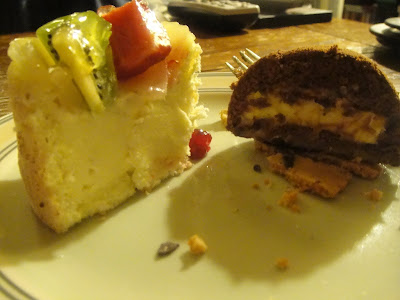 While we were eating, she put in her Jose Andres DVD from PBS. 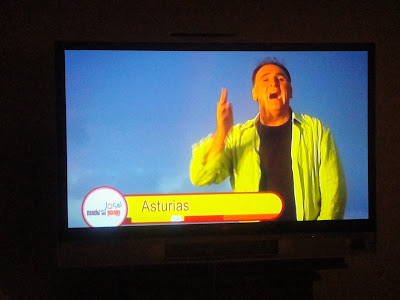 It truly was a Jose Andres night. The food and sangria was excellent, the company was even better and Jose was right there on TV making sure we were having a great Spanish time

Fill a glass pitcher halfway with ice and add the chopped fruits. Tilt the pitcher and pour the cava very slowly down the side; this will help retain the bubbles. In another pitcher or bowl with spout, combine the brandy, Licor 43, white grape juice, and sugar, then pour the mixture into the sparkling wine and fruit. Give a quick stir and add the mint sprig. When serving, make sure each glass gets some ice and fruits.

Heat the olive oil in a medium saute pan over a medium flame. Place the chorizos in the pan and cook until they are slightly browned on all sides, about 5 minutes.

Pour the hard cider into the pan and raise the heat to high. Bring to a boil, then lower the heat to medium. Cook for around 30 minutes, until the chorizos are soft and the cider is reduced to 2/3 cup.
Place chorizo in bowl and cover with the reduced cider. Serve with warm bread.
Serves 4

Tomato toast with Spanish ham
From Jose Andres, A Taste of Spain in America

Toast the bread. Set aside.

Cut tomatoes in half. Rub the open face of the tomatoes into one side of each piece of toast until all the flesh is grated. Throw the skin away.

Drizzle olive oil, as liberally as you like, over the tomato. Season with salt to taste. Place a slice of ham on top. Drizzle with a little oil again.

Squid with garlic and parsley
From Jose Andres, A Taste of Spain in America

In a flat griddle or a medium frying pan, heat 1/2 tbsp of olive oil over a medium-high flame.

Add the remaining 1 1/2 tbsp oil and the garlic to the pan, and saute for 20 seconds. Remove from the heat.

Sprinkle the lemon juice over the garlic and stir together. Sprinkle the parsley into the mixture, pour it over the squid, and add salt to taste. Serve immediately.

Cut the tomatoes in half. Place a grater over a large mixing bowl. Rub the open face of the tomatoes over the grater until all the flesh is grated. Discard the skin.

Heat the oil in a medium saucepan over a medium-low flame. Add the onions, the sugar and the salt. Cook, stirring occasionally with a wooden spoon, until the onions become soft and tender and turn a light brown color, about 45 minutes. You want the onions to caramelize. If they get too dark, add 1/2 tablespoon of water to keep them from burning while they cook.

Add the reserved tomato puree, the pimenton, and the bay leaf. Cook for another 20 minutes over medium heat. You'll know your sofrito is ready when the tomato has broken down and deepened in color, and the oil has separated from the sauce


Rossejat, Pan-fried angel hair pasta with shrimp
From Jose Andres, A Taste of Spain in America

Bring the stock to a boil in a small saucepan. Once it boils, reduce the heat and maintain it at a simmer.

In a paella pan or a medium flameproof casserole, heat 1 tbsp of the olive oil over high heat. Add the monkfish and sear on all sides, about 2 minutes. Remove the fish and set it aside.

Reduce the heat to medium-low, and add the remaining 2 tbsp of oil and the pasta. Pan-fry, stirring it continuously with a wooden spoon, until the pasta has a golden brown color, about 10 minutes. Be careful not to burn the pasta. Add the garlic and cook for 1 minute. The add the sofrito and raise the heat to medium. Pour in the hot stock and add salt to taste.

Add the shrimp and the seared monkfish pieces, and stir with a wooden spoon. You'll see the pasta absorbing the liquid. Don't touch the pan anymore. Cook for 6 minutes, until the liquid has evaporated.
Remove the pan from the heat and let the rossejat rest for 3 minutes. Heat a salamander or broiler, and place the casserole underneath until the pasta on the surface starts to curl up and brown slightly. Remove, and serve immediately with allioli on the side.