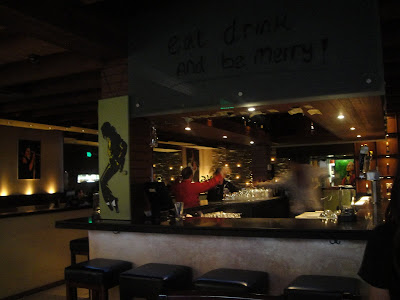 It's Halloween weekend and I definitely don't want to be at a costume party, suffocating in a tight and sexy outfit. No, this year I have finally grown up. I'm putting my knee high socks away and instead, hope to spend the weekend either at a low key bar, or at home vegging in front of my TV. To kick off my grown up Halloween weekend, I headed over to Bar*Food in Brentwood, one of my favorite watering holes in the area. It's casual, friendly and the food is comforting. A couple weeks ago, I was at Bar*Food for dinner and drinks. It was the same drill this time: Friday happy hour drinks and dinner but this time, I was there to check out their new food menu. Apart from their existing menu of burger, mussels and bangers and mash, they now have added on traditional Irish fare such as shepherd's pie, steak and kidney pie, and fish and chips. Already the list is sending me to my happy place.

They still have Happy Hour from 5-7 pm. House wine is $5, select beers at $3.50, burger, calamari and various other items ranging from $2 to $6. And yes, they still have free hot dogs. 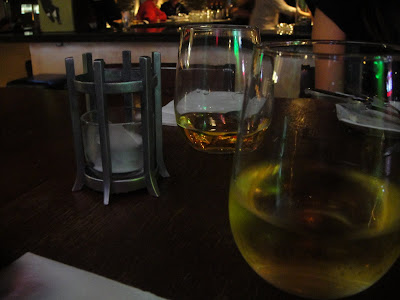 We made it to the bar just in time for happy hour, so wine for $5. 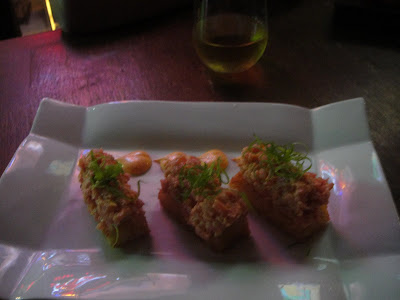 Tuna on Crispy Rice, also on the happy hour menu for $6 (normally $9) and came in 3 pieces. Some might think it had a bit too much mayonnaise but personally I liked it because I thought it gave a creamier consistency. I loved the crispy rice which was crunchy on the outside and a little bit softer inside. There was a heap of tuna atop the rice, with aioli on the side. Surprisingly quite filling; each tuna sushi was a few bites full. 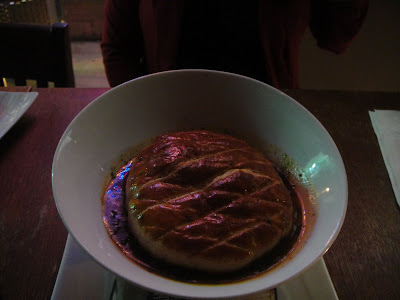 Steak and Kidney Pie
Delicious!! I love English/Irish pies. I liked how this was not served as an actual pot pie. It was a puff pastry that was on top of the steak and kidney. The crust was buttery and golden. The kidney and steak were cut into bite size pieces and cooked well. The gravy had a curried flavor and wasn't too heavy or dense. Instead it was a little viscous, which made for a hearty meal but not painfully heavy. I loved every bite of this dish, but kidney is still a kidney, so it's not for everyone. 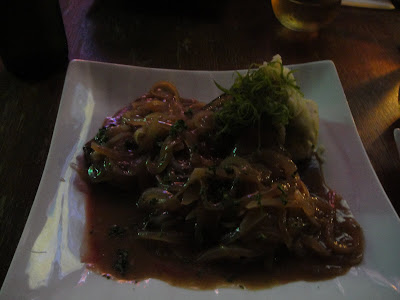 Liver and Onions
There were lots of thin liver slices and the onions were caramelized and had a tart flavor from the balsamic vinegar. Another delicious dish, but once again, not for the faint hearted.

An issue I had was that our waitress dropped off the two plates while our fish and chips was still missing. She didn't mention that it was going to take a while for the last dish to come out so we started on the 1st two while my friend was left waiting. After we were halfway though our dishes, we asked the waitress and she said "Oh, the fish and chips is going to take a while". Hmm, wish she would have mentioned that when she dropped off the first two plates. 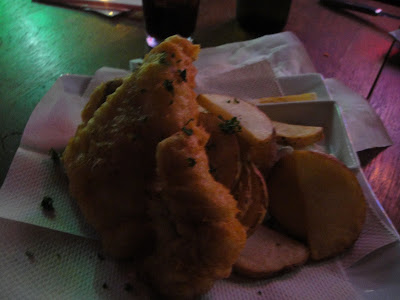 Fish and Chips
Fried cod and potato slices. The batter was golden and a bit airy, and the cod was tender and fresh. I only wished they had fries instead of the potato slices, but that's a personal preference.

Bar*Food is the type of place where you're usually too stuffed to get dessert. But this time we rallied and decided to split a dessert between the three of us. 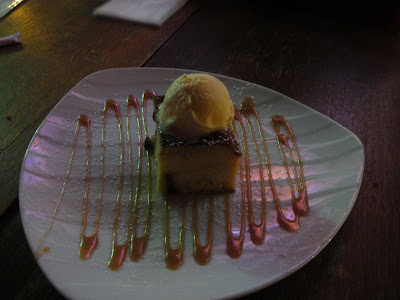 Bread Pudding
The bread pudding was actually pretty dense and firm and was served warm with a scoop of vanilla ice cream and drizzle of caramel. What a great way to end a filling meal - let's just say that the poor dessert didn't even have a chance: there was no evidence of it after we were done with it.

I've always had good service while sitting at the bar. We sat at a table this time because the bar was full when I first got there, but I have to say that the quality of service differed. The restaurant is pretty large and patrons were spread out so the two waitresses were never in one spot for long. There were a few times when I was left without proper utensils, drinkless and waiting ten minutes for her to come by, even after I tried flagging her down. She also wasn't very friendly (which is a HUGE difference from the smiling faces behind the bar) but to her credit, she did warm up at the end.

Once again, the food was amazing, satisfying and reminded me why I can't get enough of this place. I am so glad they expanded their menu and added heartier food items. Next time, I'd like to try the coddle and Guinness beef stew, but chances are, I won't be able to say no to the steak and kidney pie. It appears that Bar*Food has found it's sweet spot; perfecting its food and drink menu, and even launching a new jazzy website that would make any web designer proud.

Excellent write-up on what has become my go-to spot for happy hour. I love the spicy tuna on crispy rice, especially the crunchy and soft textures of the rice. And I like how the tuna has some nice kick to it. I haven't had a chance to try the steak and kidney pie, but it looks delicious. Last time I came here, we ordered TWO plates of the bread pudding for three people and finished it! Yeah it's that good!

Thanks Daniel! You have to go back and try the new menu, they offer really good ole comfort food. I loved the puff pastry on the steak and kidney pie: golden, buttery, delicious!