*sob* why did they give up Riva for another Fraiche?????

Fraiche, started by Jason Travi and Thierry Perez, in downtown Culver City has had many fans since its opening in 2007. It's menu boasts good French/Italian dishes but service had been a sore subject. Most complained of Travi's snobby and brash attitude. No less than a year after its opening, Riva was spun off in Santa Monica. Riva's initial menu consisted of crudo, pizzas and entrees but then switched over to stuzzichini (tapa portions) and just last week, news erupted that Riva was converting to another outpost of Fraiche. Thierry left 6 months ago and Travi just parted ways with Fraiche this month. There's been lots of changes but hopefully the food stayed good.

We were looking for a dining place in Santa Monica to celebrate my friend Dilu's birthday, so we decided to check out the new Fraiche location. The menu looked the same as Fraiche; pastas and a couple entrees. We decided to order a couple appetizers for the table and an entree each. They ran out of the lobster tagliatelle (drats) and said they would substitute it with shrimp. Hmm.. for the same price? Doesn't seem fair... 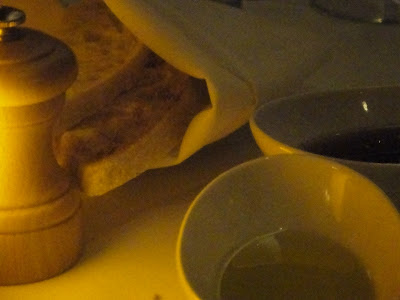 Bread was served only after we requested, and it arrived at the same time as the appetizers. 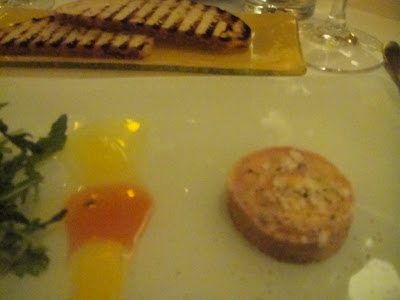 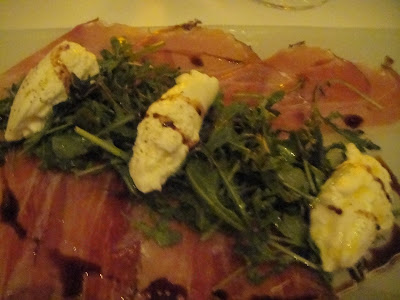 Speck and burrata. The speck was mild and tasted great with the drizzle balsamic vinegar. I am not usually drawn to mozzarella but this was delicious. It was soft and creamy but didn't have a strong flavor. This was definitely my favorite of the starters. 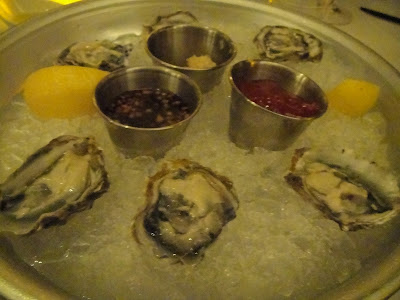 Oysters on half shell 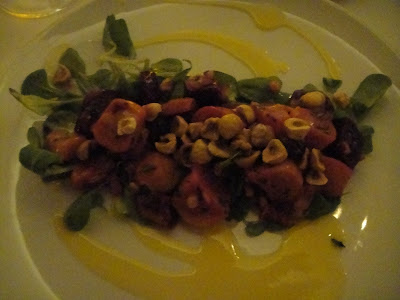 Baby beets, with hazelnuts, mache and mozzarella. My friend omitted the mozzarella from the dish. The beets were lovely and I liked the crunchy hazelnuts.

The only beef I had with the appetizers was that there was a salad overload on most of the plates which just seem like filler to me. Entrees came out shortly after. 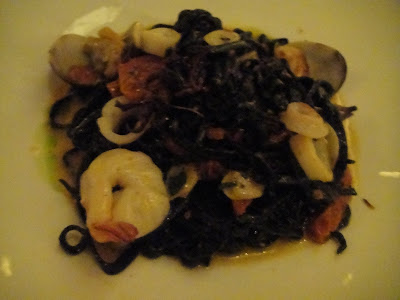 Squid ink pasta with sun dried tomatoes, shrimp, calamari and clam.
The pasta was soft and delicate, and I liked the dark black color from the squid ink Most of the seafood was perfectly cooked except for the calamari that was overcooked. The pasta dish was delicious but I think it needed a bit more flavor, perhaps from a more intense seafood broth or a little more salt. 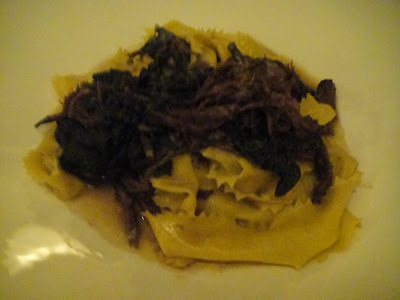 Braised short rib pappardelle with arugula
The pasta was fresh but according to the homemade pasta-expert at the table, it had a bit too much flour and needed a bit more egg. The braised short rib however was tender and flavorful. 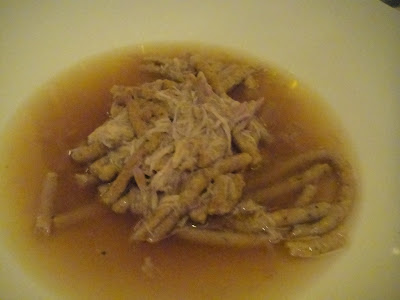 Breadcrumb pasta served in broth with pulled chicken
When we first asked about this dish, our waiter said that it was very heavy. Hmm.. don't think its any heavier than the pappardelle and short rib pasta.. I liked that this pasta was prepared differently, in soup. The pasta itself was a bit denser because it's made from breadcrumbs. The soup was served lukewarm so it would have tasted better if it was warmer. The online menu also listed a similar dish (that wasn't offered when we were there) with pulled duck instead of chicken. I think the former would gave been better because of the richness and color it would bring to the dish. 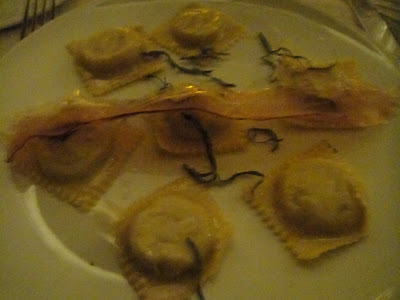 Corn ravioli with brown butter and sage
One of my favorites. It was simple. I loved the sweetness of the corn and the sage butter was fragrant. I think this is where Fraiche excels; with its fresh and simple pasta. 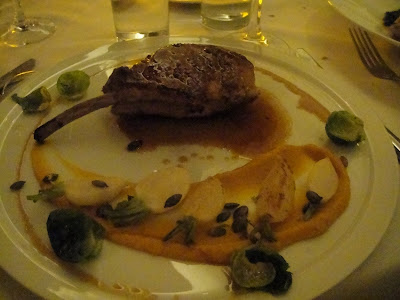 Kurobuta pork chop with brussel sprouts
It was great how the pork was huge but yet was cooked well and evenly. 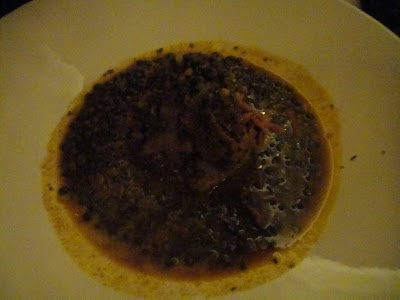 Woodfire pork. Yes, it looks like a black mess but it was the best of the entrees. The meat was soft and the sauce had a sweet maple flavor. 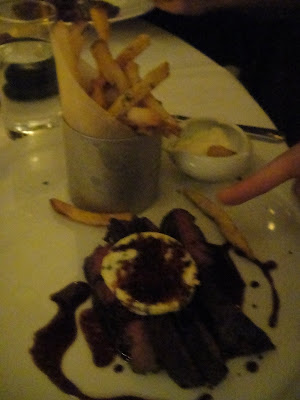 Steak and frites.
Seared flat iron steak, with hand cut fries and compote butter. Fries were delicious, wonder if it was double fried in duck fat.. 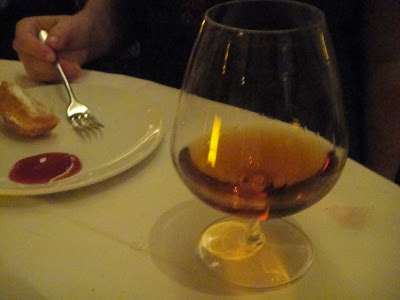 Hennessy with dessert. I can't drink this, even a drop makes me cringe.
For dessert, we ordered beignets and two bread puddings. 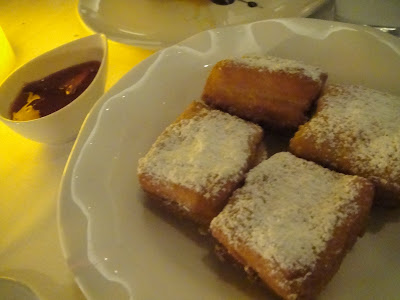 Beignets
I thought it tasted good but the consistency was doughy and hard. 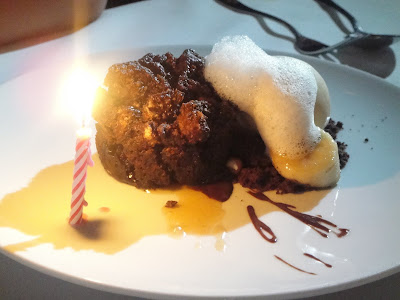 Chocolate bread pudding, bourbon caramel sauce, peanut brittle ice cream (with candle for the birthday girl but her dessert not complimentary).
Odd consistency, it wasn't like a regular bread pudding that is usually soft and warm. Instead, it tasted more like cookie that was crumbly.

Overall, a fun dinner. The service was a little off; the waiter tried to clear the plates without even asking if my friend was done but he learnt quickly because after that, he would ask us if we were done before taking the plate away. The sommelier's recommendations were also a bit off. The Chenin Blanc had a bitter after taste and the burgundy was unbearably honey. Another issue with the restaurant is that they did not list their new location and phone number on their website (and you couldn't find it on google either) so someone in our party had trouble finding the restaurant.
The food was alright; there were a couple of strong dishes but some of the rest were nothing special. I am actually a bit bummed that they got rid of Riva. They already have a Fraiche Restaurant in Culver City so it would be nice to have a different location that offered a different menu. I enjoyed my dinner the last time I was at Riva; I can't eat pizzas (bad cheese experience) but they had a wonderful potato and fennel sausage pizza. Overall, the food was good but I don't think it lives up to the huge hype; I have had better pasta dishes. I would give Fraiche a 3 out of 5 stars.

Hits: pork, speck and burrata, corn ravioli
Misses: wine recs, nothing horrendous but did not live up to the hype
Rate: ***