Heading East to Din Tai Fung for their much hyped XLBs 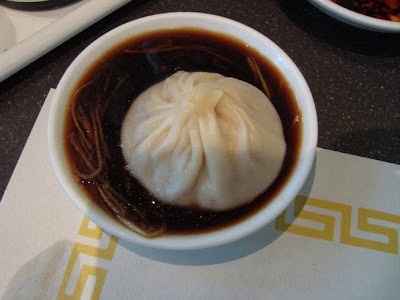 Yes, I don't like to leave my Westside bubble so when my friend Dilu suggested that we head to Arcadia for some authentic Chinese food, I cringed a bit. Thankfully, LB offered to drive. In that case, I'll go. Xiao long bao (XLB) or soup dumplings are typically pork dumplings filled with soup, hence the name. I've only had it a few times so I was excited to try. Din Tai Fung is a well known Taiwanese restaurant known for its soup dumplings. It has locations all over the world including Indonesia. Malaysia and Australia. Apparently it is the place to go if you are somewhat new to this dish. This is because Din Tai Fung has a large variety of dumplings, ingredients are fresh and the place is clean. The Arcadia restaurant is so popular that they have opened another location just a few steps away.

When we got there at 10.30am (when it opened), there was already a line and you had to take a ticket. You are only seated when your whole party has arrived. However, you can check off a list of items that you want dim sum/sushi style so that you are served shortly after you are seated. That's pretty darn efficient. While waiting at the reception area, you'll see the cooks in the kitchen separated by a glass partition, where they are industriously making the dumplings by hand.

One of the biggest issue I have is that they not only do not serve alcohol, but no outside alcohol is allowed. All the other Chinese restaurant I have been to allow customers to bring in their own alcohol. I'm sure I'd order more food after I've chugged a couple glasses of mimosa. Oh well, their loss. 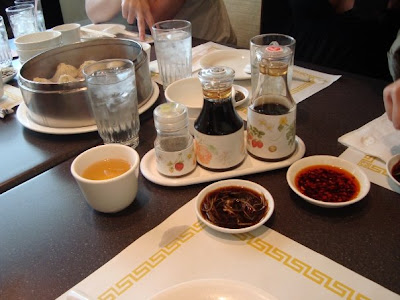 Condiments on the table include vinegar, ginger, soy sauce and chili. The chopstick wrapper had directions on how to properly eat the dumplings. 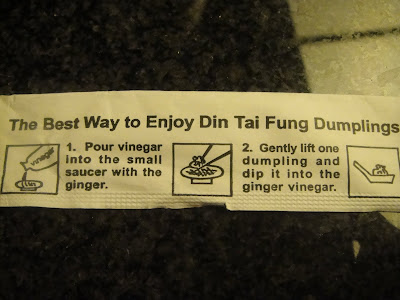 Basically you dip the dumpling into the ginger vinegar and/or chili sauce, place the dumpling on a spoon, take a bite and drink the soup, then eat the whole dumpling. For most orders, dumplings come in 10 pieces which was perfect because there were 5 of us. 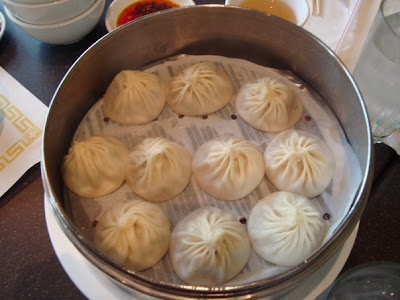 First up, regular pork dumpling. I followed the chopstick instructions. Thankfully the soup wasn't scalding hot. The pork was delicious and flavorful. I liked the sharp vinegar flavor which I thought complimented the saltiness of the pork. These little yummy packages were so tiny that they were literally a bite full and I could have easily had the whole tin steamer of dumplings in a matter of seconds. 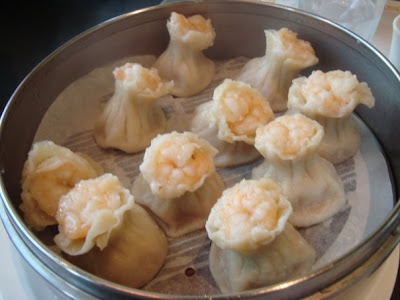 Pork and shrimp shu mai. These tasted like the shu mai that you would find at a dim sum restaurant, except these were larger and stuffed full of shrimp. They also seem to be less greasy than the ones served at dim sum. 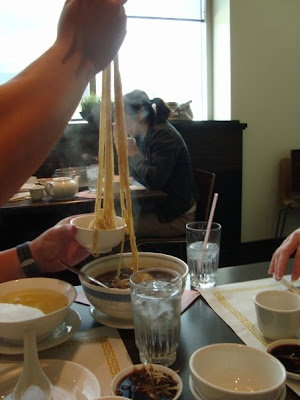 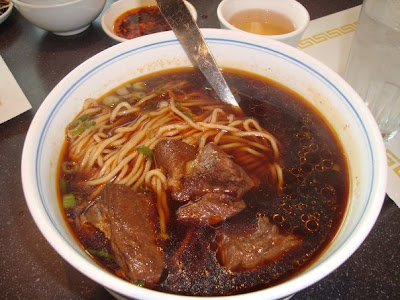 Braised beef in noodle soup. Spicy, comforting warm bowl of soup with a hunk of beef. This was the favorite of the table because the soup was perfect for a chilly morning, and the pork was tender and had a sliver of fat in each chunk. 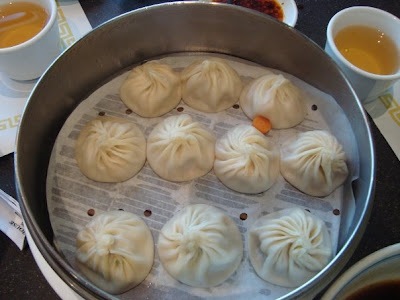 Crab and pork dumpling. This was a bit fishy so I did not care for it. I didn't even eat my allotted two pieces - that's usually a bad sign. 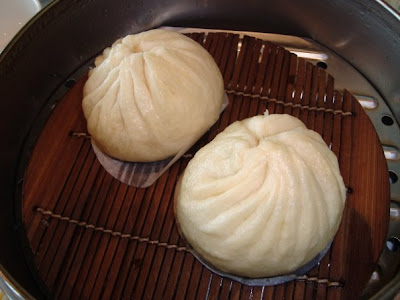 Pork bun. We thought it would be more like a BBQ pork bun but it was the same pork mixture as the dumpling except with a different shell. The pork was rolled into a meatball. This was a bit drier than the other dumplings perhaps because of the absence of soup, and also the bun is a drier and thicker consistency than the thin, delicate dumpling skin. 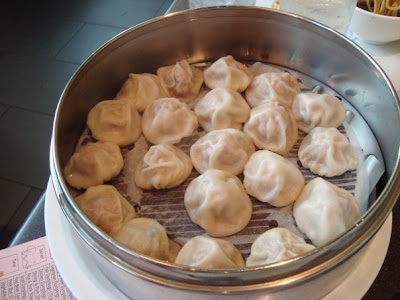 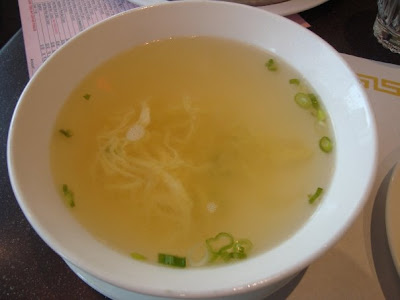 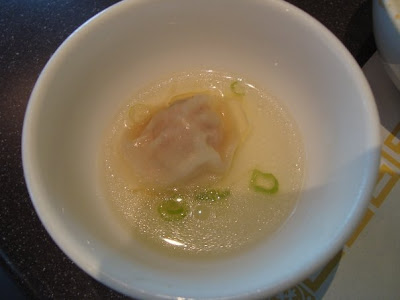 These tiny dumplings are supposed to be eaten with soup. In my opinion, I didn't think the soup was necessary because I didn't want to dilute the delicious pork flavor in the dumpling, and also the soup was a bit bland. 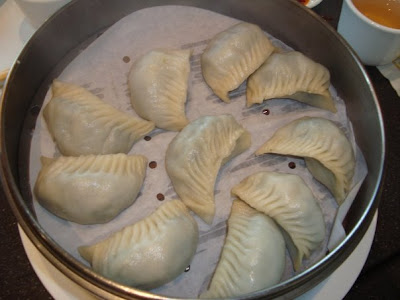 Vegetable dumpling. The vegetable filling had a weird texture and did not have much flavor. I pity the vegetarians who have to settle for this. Quite a different experience from the savory, mouth watering pork dumplings. 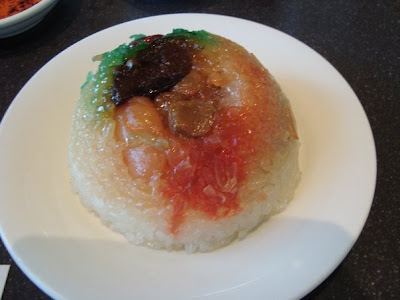 Finally, dessert; Red bean rice cake. At first it didn't sound appetizing and it looked like a Christmas fruit cake with its vibrant colors. The rice was stick and glutinous. I loved the combination of sweet and starchy, and the red bean paste was delicious.

Despite the long wait, service was pretty good especially for a Chinese restaurant, where normally you are ignored or have to wave frantically in order to get someones attention. The dumplings were delicious; the regular pork one being my favorite. Since I'm not a XLB expert I can't say if this is one of the best places to get it, but I can say that they were delicious. Breakfast cost about $18 per person- not bad for a filling meal. There were also other non dumpling items on the menu that I'd be interested in trying. But would I make the 45 minute drive even on weekend morning for this? The jury is still out, but I wish they had something similar in the Westside.

For sure! But if we are already going that far, I'd rather get Singaporean/Malaysian food!

Your blogging diligence hasn't gone unnoticed. Do you have a backlog of posts or are you really doing this every day? Keep it up!

Thanks Food Marathon, I read your blog as well! Actually, it's not backlog at all. All freshies :) No wonder I've been gaining weight ;p