So much better than your typical Bar*Food 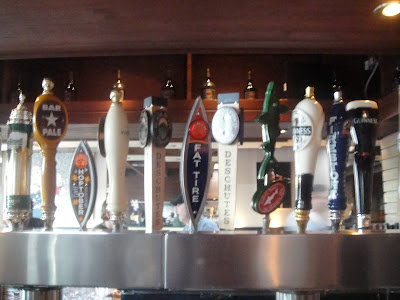 I am all about supporting local businesses. Bar*Food is a neighborhood gastropub that I've been to a couple times and have always enjoyed myself. It is not pretentious, the beer selection is good, the food is delicious, the service is great and the place doesn't smell like puke. As the name gastropub alludes to, don't expect to find potato skins here. It's all about appetizing food at affordable prices; everything is priced at $10 or less. Yes, I know the name is ungoogle-able but when you get there, you'll very likely fall in love with the place.

The bar is located on Wilshire Blvd., less than half a mile west from two popular bars Que's and Cabo Cantina. But there's no competition here. Bar*Food is not trying to be a college bar at all, as evidenced by the absence of crappy beer. Thank goodness! I don't need drunk coeds slurring and puking around me. The space is large and used to be a modern Japanese restaurant and the decor remained just that. There are flat screen TVs for game watching. You can opt to sit in the dining room with tables and booths, or at the bar. If you are in a party of 1-3, try to grab a seat at the bar. If you are sitting at the tables, you might feel a bit disconnected. A large part of the charm of the place is its Irish owner who is very welcoming and friendly. Unfortunately for the most part, the place is usually rather empty. Perhaps it is because the space is huge. I reckon that if it was a small bar, it would look less empty. I hope it starts to catch on but selfishly don't want it to become a madhouse.

Couple things have changed since I was last here. The decor used to be rather sterile. They added new artwork of musicians, by Irish artist Carl Roberts. I think it was a nice addition and made the place little edgier. I like the low table and benches that had a bit of an ethnic feel which is congruent with the east-meets-west menu. They also replaced the decorative jars in cubby holes from the previous Japanese restaurant and instead have decorated them with beer tap handles. How ingenious. 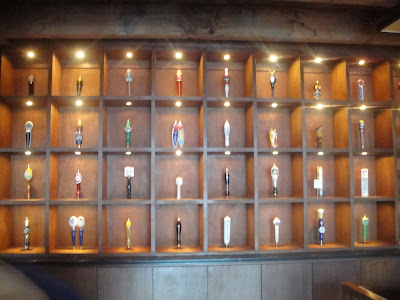 Happy hour runs from 5-7pm; select beers for $3.50, wine for $5 and various food items for $6 or less. And that includes the burger and chicken. Hot Dogs are free. Get the dogs if you are hungry but if I were you, I'd save my stomach for the other items on the menu. I've tried almost everything and my favorites are the calamari, bangers & mash, mussels, edamame, potato puffs, and the bread pudding. There are 24 beer selections including Mirror Pond, Stone Pale Ale and Coopers.

Tonight, I was joining Bertha and Kirk to kick off the weekend. They were here for the 1st time last week and enjoyed it so much that they decided to come back again this year. See, we need more of these types of diners in order to bring up the client count. 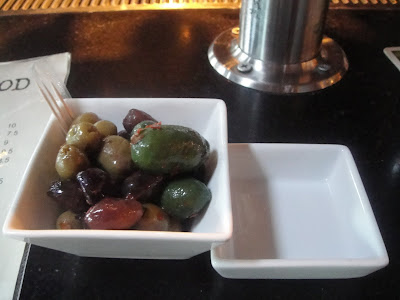 Side of olives. One of the largest ones I've seen. 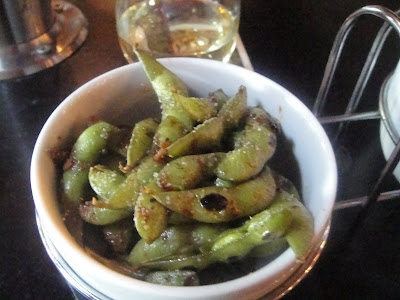 Edamame with black bean sauce. What a unique method for serving edamame. It was spicy and garlicky and I licked off every sauce on each pod. 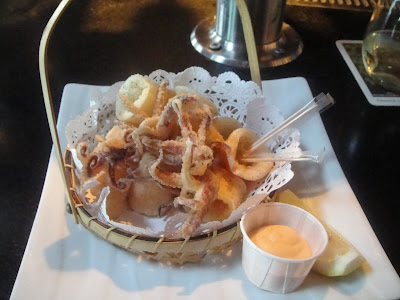 Calamari, seasoned with salt and pepper and came with a side of aioli which you really didn't need because the calamari was well seasoned. The calamari was plump and was served freshly fried and piping hot. 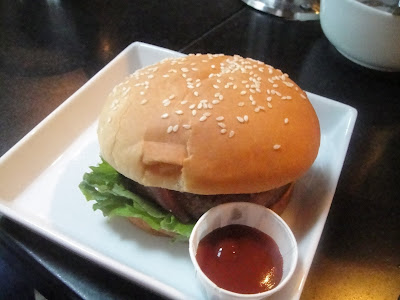 Burger. There are many mixed reviews online. Most rave about it and some compare it merely to the Big Mac. It comes with lettuce, caramelized onions and cheese. Personally, I liked it. I preferred it to the Father's Office burger only because I can't stand blue cheese and F.O is so stringent about their food, so I have only had a bite of their burger. I loved the onions as they gave a sweet, smokey flavor to the burger. The bun was lightly toasted. I think a brioche bun would have been a nicer bun but this was still good. The patty was juicy and flavorful. And at Happy Hour prices of $6, you really can't complain. 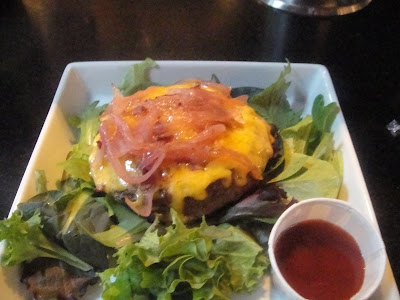 Kirk requested a healthier version: without the bun, but with cheese. 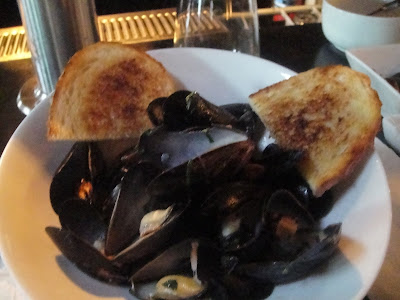 Mussels. Nice portion with two crostinis. The mussels were delicious, especially the broth. 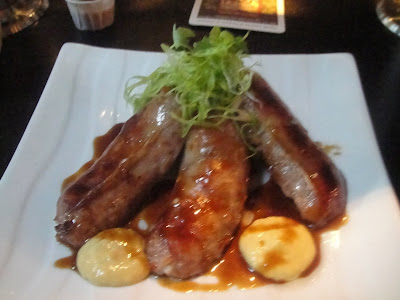 Thai banger and mash. Delicious! It was nothing like the English version of bangers and mash. The sausage was not your regular picnic hot dog. It was sweet and had a unique flavor. It tasted of garlic and Thai spices (fish sauce? lemongrass?). The bangers were served with gravy and a couple dollops of mustard. The mash were cilantro flavored. I personally don't like cilantro so I did not care for this side.

Once again, I had a great time at Bar*Food. The food was satisfying and the hospitality was great. They seem to have the formula down; It's not a trendy Hollywood bar, and that's exactly what it intends not to be. Instead, it's a great place to grab drinks/food and catch a game, while feeling right at home. The service is great. Our bartender was very helpful and friendly. It's also very casual. If you order another glass of wine, he just walks over to refill you glass. That's environmentally friendly for you. They have also been perfecting the menu and are adding new food items next week such as fish and chips, steak and kidney pie, shepherds pie. I love 'em all and we'll be heading back there next Friday.

Bar*Food is sort of like the TV series "Arrested Development". It has a cult following. Everyone who's been there raves about it but somehow it hasn't quite caught on as you would have expected. Although restaurants aren't held hostage to media companies, they need to be profitable to stay alive. So, come support a neighborhood bar with charm, good beer selection and food. Well, unless you are an under aged collegiate. In that case, stay at Cabo.