I don't usually pop over the hill on a weeknight but my favorite local alt rock band, the Silversun Pickups (or fondly known as SSPU) were playing at the Gibson Amphitheatre. Before I start, I have a bone to pick with large ticketing conglomerates. Silversun tickets were $50 a person including the exorbitant fees and taxes. A couple weeks later, we came to find out that Live Nation was now selling the tickets at $20. My friends ended up getting a pair at $20 a piece and the seats were comparable to mine, and even more center stage. That's BS, I tell you! Why ding the loyal fans who had committed to the concert up front and paid full price. To add salt to my wound, I found sometime later that SSPU would also be playing at the Echo, with Henry Clay People. Yes, that's a WAY smaller and intimate venue, and tickets were $9. Grreeaaat... If this was a one off situation, I could let it go. But it happened recently when I went to see Moby a couple week ago, and also with The Bravery tickets which I purchased General Admission at $141 for four tickets ($35 each) each and now, Live Nation is offering a discount at $93 if you buy a four pack ($23 each). And get this, Citi offered its customers (which I am one) two tickets for $10 total. Grrrr..... I always knew there was a strategy for purchasing clothing online (wait for online Banana Republic sale!) or airline tickets, I just didn't know that one was also required for concert tickets. 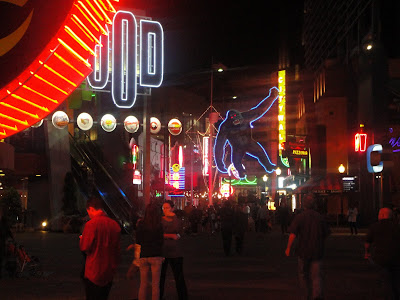 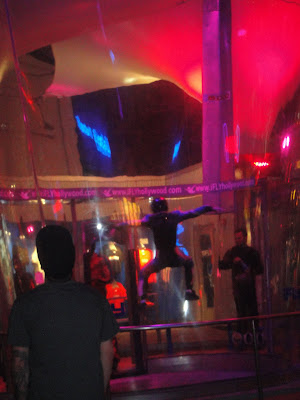 Anyway, pre-concert drinks were necessary to sedate me a little. Gibson is located at the Universal Citywalk, a massive tourist trap. Why wouldn't it be? It's the gateway to theme park Universal Studios, and the Citywalk houses restaurants, movie theatres and shops. It is really like an adult's Disneyland with the cheesy bright lights of Time Square and as I recall, a hopping date spot when I was in college 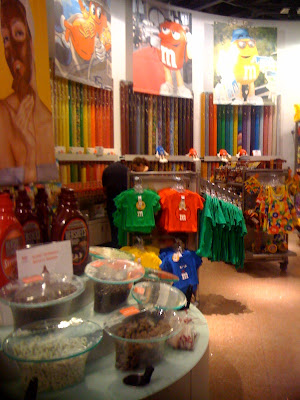 We stopped by IT'SUGAR candy store for a few pieces of chocolate. There are not that many great food options on the walk; mainly chain restaurants. There's Panda Inn, Hard Rock, (ride-the-bull-)Saddle Ranch etc. Karl Strauss Brewing Company was the lesser of the evils. Besides, there is nothing better than beer and bar food right before an awesome rock concert. 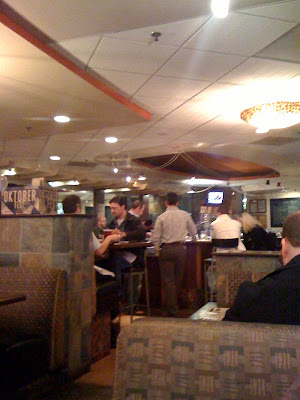 Karl Strauss has an outdoor patio area and indoor dining room. When we first got there, the hostess told us it'd be a 20 minute wait but it was empty inside. She came by after 10 minutes to say that they were ready to seat us. They have a selection of their signature beers, happy hour from 4-6.30pm on weeknights, and Cask night on Thursdays ($3.50 beers until it runs out). The food is reasonably priced; burgers/sandwiches are a tad over $10, meat entrees hover around $20. The Ahi poke, sausage sampler and the ribs all looked good to me. They also have fish and chips too but *must*resist*urge*to*order- I need to try something different. 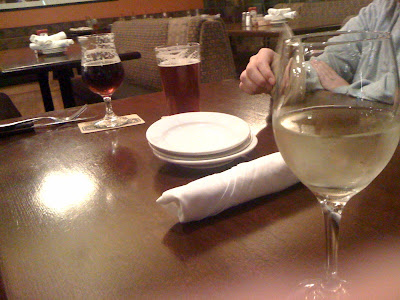 We started with a round of drinks: 10th Tap Porter ale, Brown ale and wine. 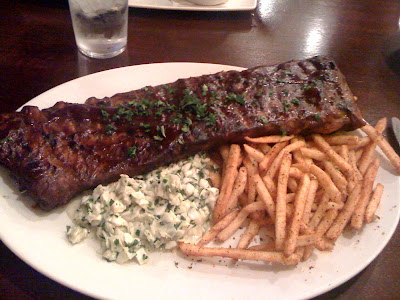 Full rack of BBQ Ribs
St Louis Pork ribs with fries and slaw. Fries came with a choice of garlic Parmesan or Cajun spice. The Cajun spiced fries were a bit soggy and seemed like they were sitting under a heat lamp for a while. The ribs came in a huge slab although you could also order a half order. The ribs tasted good but there weren't generous chunks of meat; rather, just a thin layer of meat over the bones. So overall, not bad but for $18, I'd rather walk down the Citywalk to Tony Roma's. 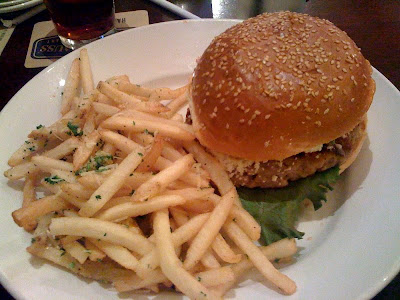 Cotija Avocado Turkey burger
1/2 pound lean turkey patty with chili citrus sauce, cheese, avocado, chili mayo, lettuce and tomatoes and seasoned tortilla chips. Garlic fries were very greasy but the burger was good. It was a large portion and the Cotija cheese really added something to a normally ordinary burger. 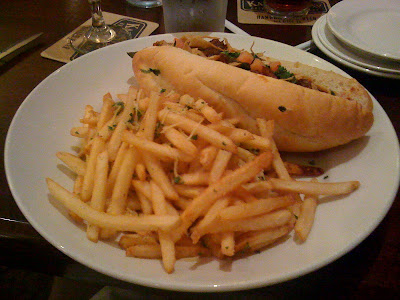 Ancho BBQ Pork sandwich -Slow roasted Ancho Chili BBQ sauce, pasilla peppers and onions, topped with corn tortilla strips and served with french fries.
What's up with tortilla chips on the sandwich and burger? It's rather random. Pork was good but overall, the dish was very salty. The tortilla strips and the peppers/capsicum also overwhelmed the pork. I think another complaint was the bread which was generic and tasteless.

Ahi Tuna poke
So, while I was busy bossing the boys to take photos of their food, I forgot to take one of my ahi poke. Sigh. I got made fun of for ordering tuna poke at a Karl Strauss, but I really wanted something refreshing and light. Basically it was a bowl of diced fresh tuna with tomatoes, cucumber, red onion , cilantro, tossed in a spicy dressing and served with a side of deep fried wonton chips. You can add avocado for an extra buck. I actually really liked it and it was a nice sized appetizer potion. I liked the spice from the dish and it hit the spot for me. The wonton chips were crispy and a little oily but they went well with the lean fish.

So, overall, the food was good, given what it was, except for the pork sandwich. Service however, was rather slow. We waited over 15 minutes for our drinks after ordering- yes.. 15 minutes at a brewery. Water that we requested didn't arrive until our entrees were served (which was about 30 minutes after we had ordered). They also didn't bring out wet naps for the ribs. Our waiter was nice but I saw him covering the tables in the dining room and in the outside patio which seemed to point to under staffing of waiters and at the bar.

After dinner, we walked a couple steps to the Gibson. The music event was the LA Weekly 101 with The Dandy Warhols, Matt & Kim and a couple other local bands opening for SSPU. It was a poorly advertised event which was probably why Live Nation was left with excess tickets. This was LA Weekly's first stab at the "festival" and apart from the good lineup, I think the absence of a packed house meant a bit of a failure for the entertainment newspaper outfit. Personally, I like the Dandys although the boys wanted to slit their risks after being subjected to the set. 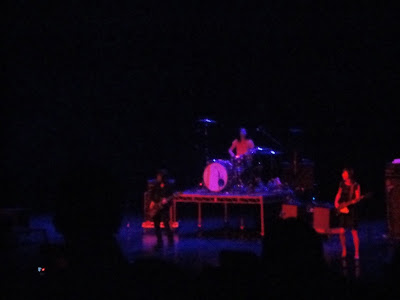 SSPU was awesome as usual, although Brian Aubert's love for heavy screeching guitar feedback was a bit unnecessary- my ears are still ringing today. Every song was jamming but I think they could have picked better songs for their encore. It's great to still see successful rock'in alternative bands in the Los Angeles music scene.