I love Los Angeles holiday traffic, or the lack thereof. People tend to leave LA for the holidays instead of come back for it. Such is the trend of a transient town. I decided to meet up with my good friend Heather who was in town for Thanksgiving and we ventured out into Hollywood for an evening. Took me 15 minutes from the Westside. Ahhh.. I could get used to this.

We decided on Jones which just celebrated its 15 years in business. The restaurant bar is laid back but still hip. It's loungey, dark with leather booths, an elevated wraparound bar and great rock music blasting. They even played my favorite and lesser played Beatles song "Here, there and everywhere". Just for that, I have to give them a thumbs up for being such a rock'in place.

We were able to grab seats at the bar. The place got pretty packed at 11.30pm so our seats were prime spots. The crowd was pretty friendly and non pretentious. A girl gave up her seat for me when our food arrived and some guys came over to to give us recommendations for their favorite dishes. I've heard mixed reviews regarding the service but personally, I thought it was great. The bartenders were fun and attentive, the waiter came by to chit chat throughout the night. We were always served almost immediately but I saw many people frantically flagging down bartenders, shouting out orders and waiting impatiently to order. In fact, one girl got pissy and argued with the bartenders when they apparently missed her order. 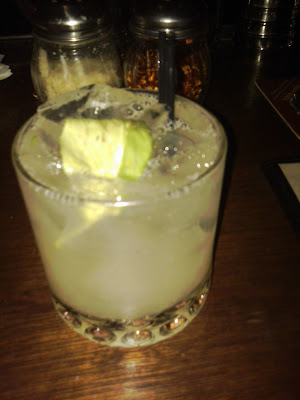 The Hendrix
It tasted like a margarita but fresher and better; made with tequila, lime juice, pear juice and basil.

Most of their drinks are named after rock artists or songs. The food menu included a couple pasta dishes, meat entrees and pizzas. I liked their spaghetti and meatballs and apparently the pizzas and chopped salads are pretty good. 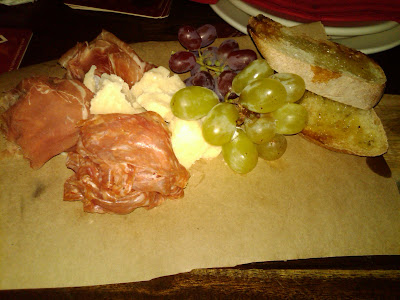 Cheese and charcuterie plate
I liked that the cheese was blocks of Parmesan Reggiano instead of smelly cheeses. The Parmesan was sharp and salty. There were three cuts of cured meat. I liked all the components of the plate including the juicy grapes although some of the grapes were a little squishy. 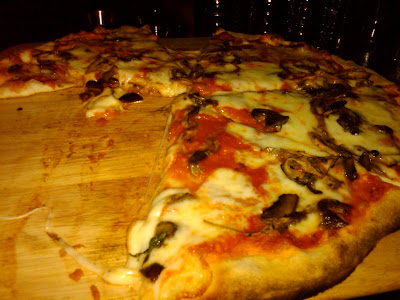 Pizza Funghi
The waiters recommended the pizzas. This was a pretty large pizza with thin crust, san marzano tomatoes, fresh mozzarella and a variety of mushrooms such as crimini, shitaki and oyster mushrooms. The ingredients were all fresh and of good quality. In addition, the pizza wasn't too greasy. I am slowly getting over my cheese issue so much that right on the spot, we made reservations for Pizzeria Mozza for the weekend.

Single gals, if you are looking for some eye candy, Jones is the place to be. I didn't even realize until I looked around and noticed the guy to girl ratio (something ridiculous like 5:1). Perhaps it was just the holiday crowd, perhaps girls tend to go home to spend time with the family while the boys like to kick start the long weekend at the bars. I don't know. All I know is that it was a fun night at Jones: the food, the drinks, the staff, the people watching.