You may need some Bravery to handle the spice at Hite 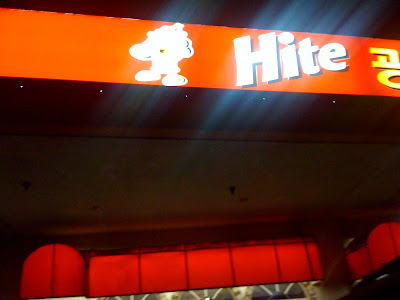 The Bravery, a New York rock band, is one of my top 20 favorite (living and performing) bands. They have two friggin awesome albums out plus one in the making. I make it a point to see them play whenever they are in town. Last night they were at The Wiltern Theatre, located on Wilshire and Western in Koreatown. They weren't going to go on until 9.45pm so we decided to grab dinner beforehand. There are many Korean restaurants serving BBQ or tofu soup but I was looking to snack on something more pubbish such as chicken wings and nibbles. I had noticed Hite Restaurant on various pre-concert occasions when I grabbed a curry bun (delicious!) from the bakery next door. 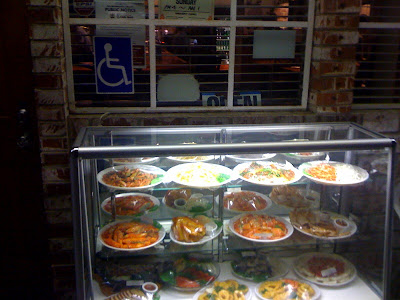 There is a food display outside. They offer valet for $2 and the guy let us keep our cars there until after the concert. You might want to check with him if it's a weekend as he might not be as accommodating. 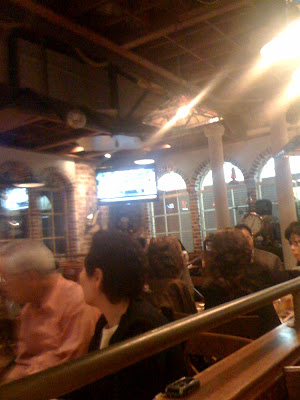 I was taken aback when I first walked in. I was expecting a dark, dingy Korean pub. Instead, the decor is very Americanized. The place is bright, clean, kitschy and not gritty at all. They even have flat screens playing sporting games and the bar area looks like something out of Cheers. When we got there at 7pm, it was mainly an older crowd but it soon began to fill up with younger diners. 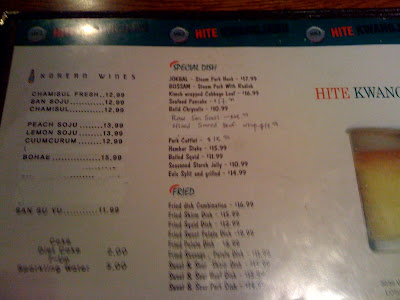 The menu was in English, save a few spelling errors which was endearing. What is a galic skewer or panbroiles sausage with vlesgetable? Many Yelpers mention their chicken wings and spicy rice cakes. Most comment that the wings are VERY spicy but sweet and perhaps a bit sticky. I didn't really want a burning mouth right before the concert so we decided to order one plate to share between the three of us. 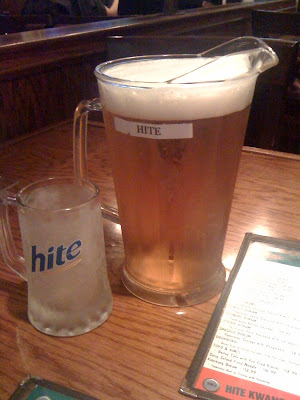 Pitcher of beer for $12.99
Hite is a Korean beer so you can expect huge frosty pitchers of beer present at every table. It's a pretty watered down beer so I barely got a buzz after many mugs. 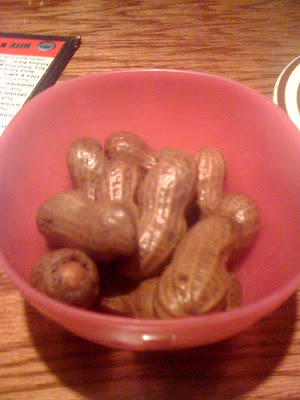 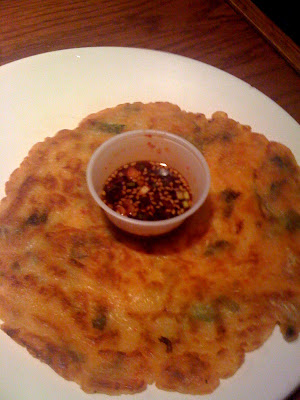 Complimentary vegetable pancake
I have a weird relationship with scallions. I hate them. I'm that person who will patiently remove every semblance of a scallion if it's sprinkled on my dish. Scallion pancakes however, is something that I crave and love. Perhaps I can tolerate it because it's mixed in with fried batter. I loved this pancake as it was thin, crispy and most importantly, free! The soy sauce was salty and had a bit of a spice to it. The sauce with the pancake was a delicious combination. 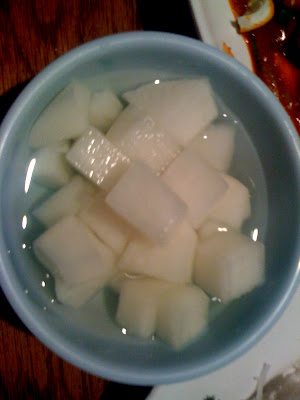 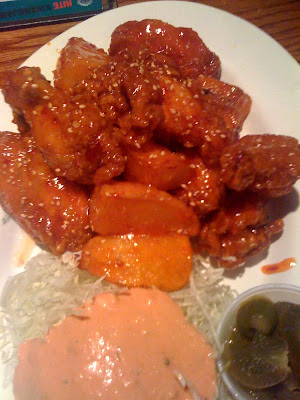 Chicken wings. I enjoyed this dish and as expected, it was hot, sweet and sticky. A very messy dish. The chicken itself was cooked perfectly: plump juicy meat that was not dry or overcooked. There was ample skin that was fried crispy. I didn't think it was that spicy; definitely not as spicy as the ones at Kyochon. I also liked the fried potatoes that were cut into big chunks and perfectly cooked. The little side slaw was simple and covered in thousand island dressing. It's probably a good side to take away some of the heat from the wings. 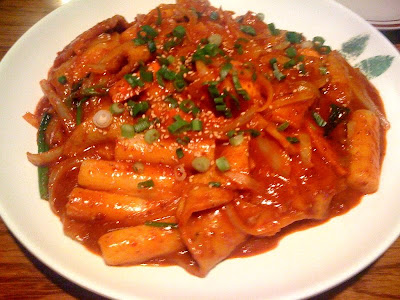 Ddukbokki $12.99 boiled dish of sliced rice cake, fish cake, eggs and seasoning
This was delicious. It was spicy and had a distinct flavor that was different from other noodle dishes that I have had. The cylindrical rick cakes were a bit starchy and very filling. The egg (not eggs) was hard boiled and smothered in spicy sauce. And the gravy was thick and spicy. If they had served this with bread, there would not have been a single lick of sauce left on the plate. 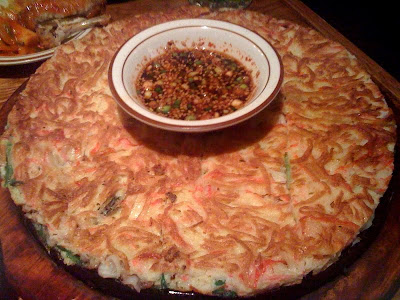 Seafood pancake $17.99
Looks very pretty and is huge. The seafood included octopus and shrimp (I think) with scallions at the bottom which ended up crispy but then a bit burnt. This dish takes 30 minutes to cook and I can see why because it's pretty thick. In fact, a bit too thick. It also had a very strong fishy smell and flavor. 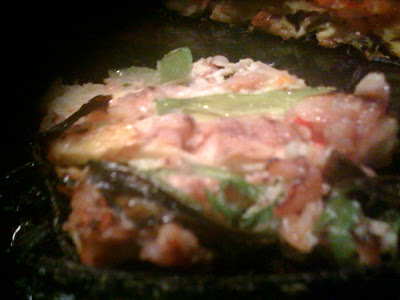 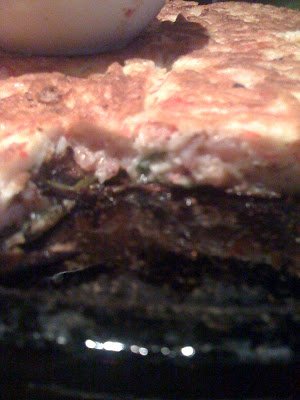 A thick cross section of the seafood pancake. I thought it would have been better if it was a bit thinner because the best part was the crispy outer layers of the pancake. The inside was a little heavy and not cooked all the way through.

Overall, I walked away very satisfied. The rice cakes and the wings were my favorite. I actually preferred the complimentary scallion pancake over the seafood pancake. I wonder if they would bring out more if we had requested. Service was alright but we were left parched on many occasions, even when my Korean speaking friend kept requesting refills. What is up with the tiny water glasses?!? The food is spicy and salty, but I suppose everyone else was downing beers to counteract the heat. The portions were pretty big so this is a good place for group dining. There are also a couple other items that I'd like to try (squid, corn cheese, think I spotted a gizzard dish too). A good meal which was very filling and came out to about $25 per person including tax and tip.

After dinner, we walked across the street to the Wiltern where watered down drinks will cost you $10. Sigh... 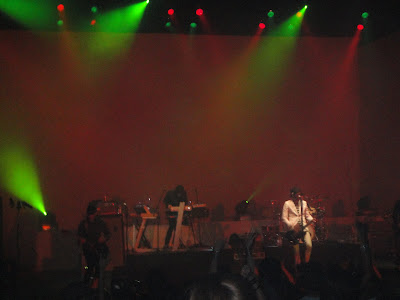 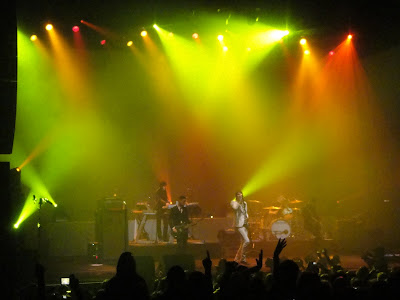 The band was awesome as usual, and I danced non stop for over an hour, hopefully burning off a couple rice cakes. The Bravery is really a great band live because of their energy. They also look very east coast (skinny, tall, suited). 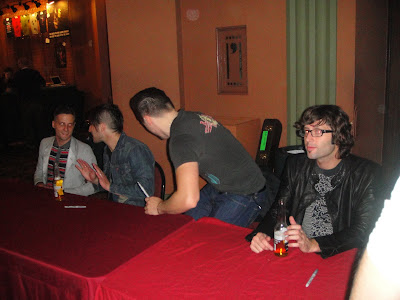 Definitely agree on the wings. they aren't spicy. And they just aren't that good. This place is OG tho. It's the only official Korean beer company sponsored "bar" in US of A. It's like if Budweiser ran a bar. ZOMG!

Yeah, the rice cakes trumped the wings IMO, although it was a bit too much of a carb fest.