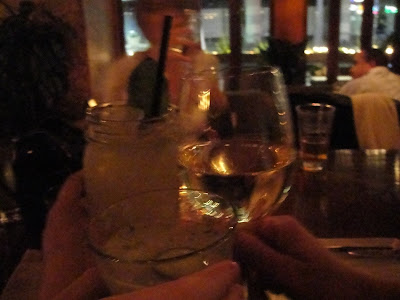 Everything in Los Angeles is pretty spread out, which is why most people dislike the city, the driving and the traffic that comes with it. Yes, I do agree that we are missing the convenience of Manhattan or San Francisco but it isn't all that bad here. There are a few spots where you can bar hop. You've got Main Street SM, Cahuenga Corridor, SM Promenade and the South Bay. We decided to head over to Third Street Promenade.

First stop: Copa D'oro, cocktail lounge
They have happy hour till 8pm, numerous cocktails for $5 and a couple paninis. Their cocktails are fun, fresh and generally very tasty. The bartenders can also custom make your cocktails.
Moscow Mule: vodka, fresh lime juice and ginger beer. Very delicious. I always love the ginger and vodka combination.
Clover Club: gin, raspberry syrup, lime juice and pasteurized egg white. The egg white sounded odd but you could even notice it in the drink. 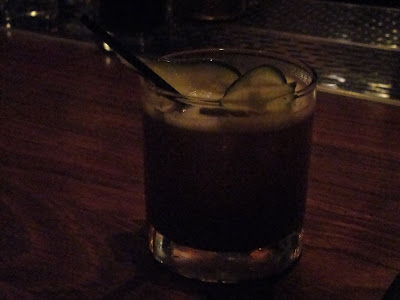 For the next non-happy hour round, we got the bartender to concoct something with vodka, cucumber and berries. He used raspberry, elderflower, simple syrup and cucumber. Another amazing drink and our bartender did a really good job with this. The cucumber essence was strong and refreshing. In fact, another bartender attempted to make the same one for us later but his version was too sweet. It's interesting that mixologists can really add their own spin to the same cocktails. 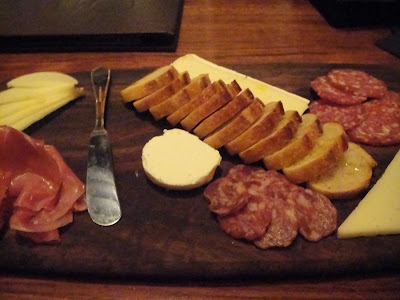 Charcuterie and board with goat, gorgonzola, Manchego, chorizo, salami and Prosciutto with toasted baguette
We substituted the gorgonzola for brie. I obviously didn't eat the cheese but I did have a bite of the chorizo which was delicious.

Next stop: 5th Amendment Alehouse
A very different spot compared to Copa D'oro, 5th Amendment is very casual and mainly serves beer, a few wine selections and no liquor. But they offer more food options than Copa. There's a makeshift music area where the DJ spins music from his iMac. The music was unpainfully loud but you got used to it after a while. The 1st and 2nd time I was here, there were some service issues but things seem to be improving. Greg, the bouncer/server was a blast, was accommodating and he also recommended some good beers. The bar carries a nice selection of craft beers and carnivore grub such as unique sausages and burgers. 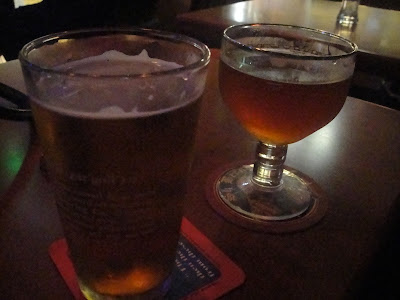 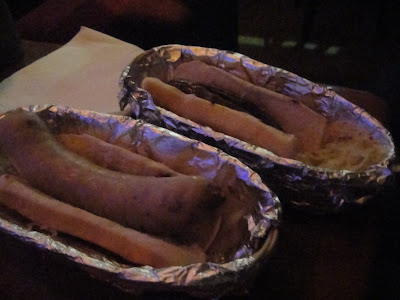 Sausages are $8 each
Venison with merlot and blueberries. The sausage was very flavorful, dense and the flavors were compacted in a small package. The sausage was intense and spiced well.
Pheasant and cognac. This was bigger and juicier than the venison. It tasted rather lean like chicken.
Personally I preferred the pheasant because it was less heavy but everyone else liked the venison which apparently is a crowd favorite. The hot dog buns were ordinary grocery-store and the sauerkraut was nothing special; perhaps it did not have enough time to marinate. Overall, the sausages were good but I think it would have been tastier if they used fresh rolls or homemade condiments instead. 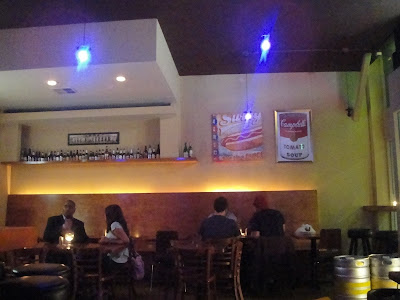 We ended the night at The Yard, a gastropub with a new menu from ex-Top Chef contestant CJ Jacobson. This spot probably takes the best of the last two bars. Good drink selection and scene like Copa and good food like 5th Amendment. There was a good amount of people out but still many seats open. Not bad for a holiday weekend. A DJ was spinning music in the corner and projected the music videos on the wall. I think the videos are a good addition especially when they play old Vanilla Ice and Madonna videos. 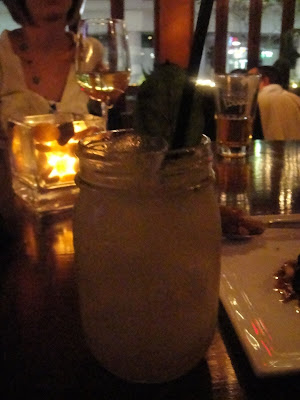 The Yard has a few cocktail selections. We ordered a couple rounds of drinks including the backyard lemonade and cucumber martini. 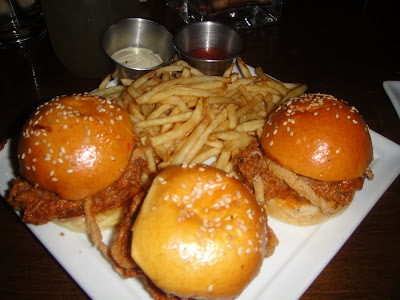 Pulled pork Sloppy Joe sliders with crispy onions
The pork was juicy and there was a lot of sauce. I liked these little sliders in that glossy toasted bun. The fries were a bit on the soggier side but late night fries are always a treat. 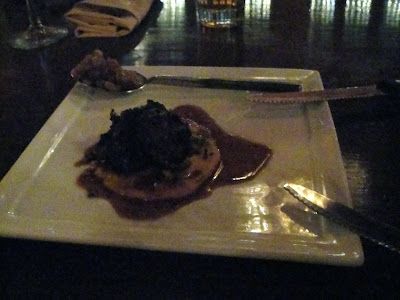 Braised crispy beef cheek with celery root yam puree, haricot vert, pickled golden raisin spice reduction
The Yard offers small, tapas styled portions so don't expect an entree size. The beef cheeks were absolutely scrumptious. I've had many beef cheeks in my time but I thought the crispiness really elevated this dish and added a nice contrast to the soft, tender meat. The puree was amazing as well. I thought this was a flavorful and well executed dish and something I would definitely get again. 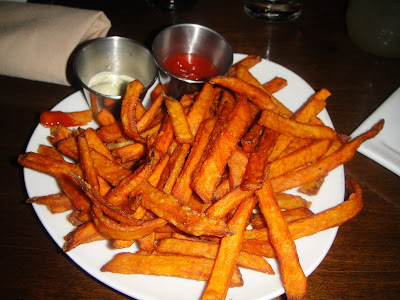 Sweet potato fries. Always a winner in my mind.

CJ came by to chat with us and he's funny and entertaining. When asked what his favorite dishes were, he said he liked the scallops and artichoke puree, and recent addition crispy pigs ear with date and cheese. The scallops were good when I had it last (it was cooked perfectly) but I personally dislike artichokes so I wasn't a big fan of the puree.

I've been to all three bars before and I thought I was most impressed this time round. The food and drinks were good and reasonably priced, the vibe was fun and laid-back, and although my previous experience with service at 5th Amendment (understaffed) and The Yard (service was slow and the waiter had an attitude) were poor, the service this time at all three bars were great. It was a fun night of barhopping. In fact, all three bars are no more than one block away from each other. There are also additional bars in the area including my go-to spot Bar Chloe, English pub Ye Olde Kings Head and wine bar Pourtal. Yes, we may not be a "city" and our public transportation may still not be the most efficient, but we can still have our convenient bar crawl nights.

Hits: crispy beef cheeks, sliders, cocktails at Copa, service at all 3 bars
Misses: nothing. it was a fun night
Rating: ***

The Yard rocks! Next time you have to try CJ's hamburger made with three types on beef. And on Tuesdays, he does a tribute to gourmet cheeses called "The Big Cheese" Tuesdays. Have you heard about the SANTA MONICA PUB CRAWL? Some of the bars that you mentioned are involved... www.santamonicapubcrawl.com

Hi Kim Koury, the burger sounds great, thanks for the rec. 3 types of beef? That's my kind of burger! And the pubcrawl sounds like a great cause and lots of fun too! Hopefully I'll be in town that weekend to partake.