7th Anniversary at Sona; still excellent after all these years 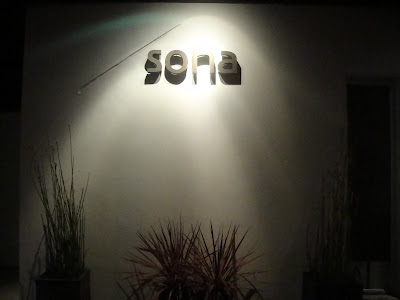 November marks the 7 year anniversary of Sona Restaurant, brainchild of Chef David Myers who also owns Comme Ca and the Boule brand. The restaurant holds a Michelin star and numerous awards. It's the place that you would automatically recommend to someone who wanted to celebrate a special occasion or one that was simply looking for an exquisite meal. I've been jonesing to go back to Sona after starting my blog. The last time I was there, we ordered the nine course tasting menu and almost passed out from a food coma. But it was one of the best meals I had last year. Everything about Sona is impeccable. The food, the plating, the fun cocktails, the dining room and the service. They offer 6 and 9 course menus in addition to ala carte. We really enjoyed the tasting menu when we were there last because the kitchen brought out different plates for each diner at each course so we were able to try different variations. For the 7th anniversary however, the special menu is set. But it's a steal at 7 courses for $77 and it looks darn good so I'm not complaining.

My friend arrived before me and ordered a drink at their tiny bar. They do not have a cocktail menu but the bartender will create whatever you desire. She asked for something with cucumber and the cocktail that was served to her was refreshing and delicious.

The dining room is formal and was rather empty when we first got there at 7pm, however it started to fill up within the next half hour. It was great to see a full house by the time we left. Apparently Sona had been struggling in the last year, partly due to the recession and partly due to the public being misinformed that it had closed (there was only a dissolution of the management company that resulted in sale of the restaurants physical assets, hence the confusion that Sona had shuttered). Thankfully, the 7 course Anniversary menu had revived the restaurant and was bringing in the clients. 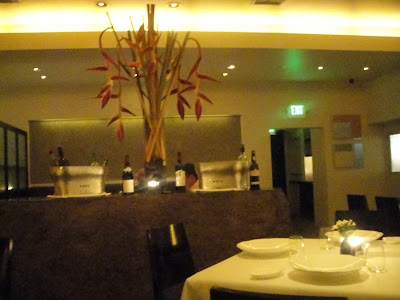 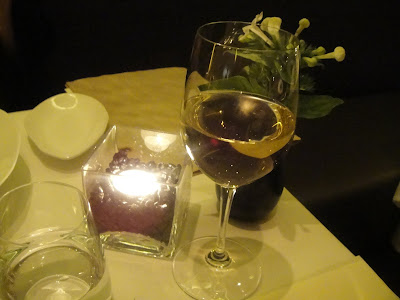 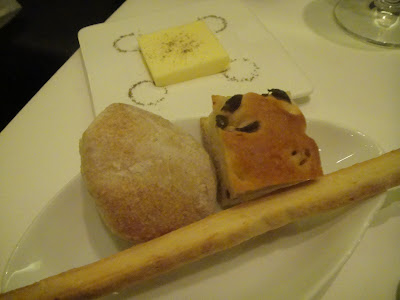 A variety of bread including Parmesan bread sticks (my favorite, I had two), black tea bread (it smelt lovely and came out piping hot and soft), olive focaccia and ciabatta.
Amuse bouche
Pumpkin creme brulee (somehow I didn't get a photo but you can check it out here) was absolutely delicious. The sweet caramelized sugar and the luscious custard was heavenly. 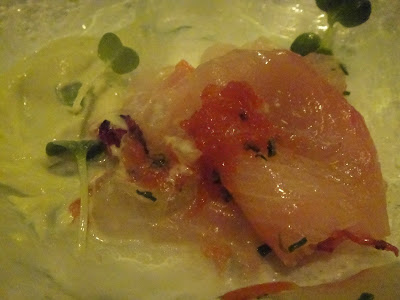 #1 Hamachi with edamame puree, spicy grapefruit, preserved turmeric
There were quite a few pieces of fresh fish. The spice from the turmeric was a nice contrast to the mild tasting fish. Fish isn't my favorite meat group (except for cod) but I definitely liked the lightness of this for the first course. 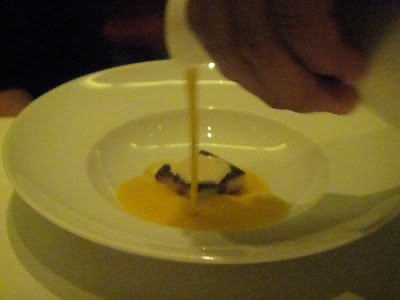 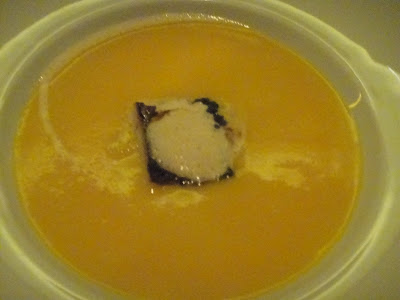 #2 Tahitian squash soup with chai foam, anago, pearl tapioca
The soup was poured table side and it smelt amazing. The consistency of the soup was smooth and it was well seasoned and served warm. I really enjoyed the piece of deep fried eel in the center of the bowl. It gave an additional layer of saltiness and fishiness to the soup. This was a comforting dish that I could have gone for seconds. 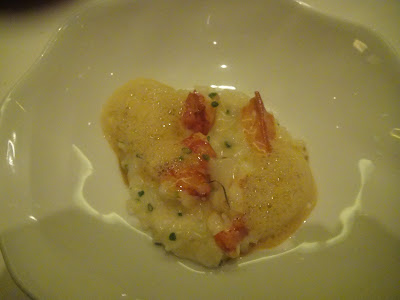 #3 Maine lobster risotto with shellfish emulsion, kaffir lime leaf
One of Sona'a signature dish and I can see why. The dish was bursting with seafood flavors, the rice was perfectly cooked and the lobster was plump. I thought I tasted an essence of truffle oil that lent additional richness to the dish.

We decided on red wine with dinner and the Sommelier recommended a Cabernet for my friend (because she wanted something heavier bodied) and a Bourgogne for me (because I wanted something more along the lines of a Pinot Noir). Both were excellent suggestions. The Bourgogne was very smooth and went well with the duck course. 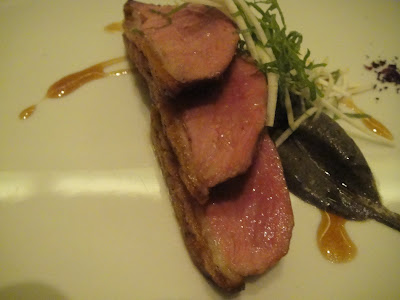 #4 Roasted duck with wasabi, eggplant puree, celery root-shiso salad
The duck was perfectly cooked at medium rare. It was tender and came with three generous pieces. The skin was crispy with a hint of salt. I didn't care for the puree of eggplant which was a bit too smokey but the thin slices of eggplant underneath was fine. Really well done, Sona. 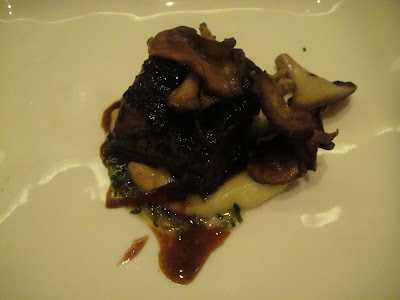 #5 Red wine braised short rib with cardamom boniato puree, mitsuba
When our waiter brought it over, I was immediately hit with an amazing aroma and knew instantly that it was going to be a good dish. The short ribs were fork tender and hearty. The puree was lovely as well; Boniato is a type of sweet potato. I find that mushroom always go well with beef and it added an earthiness to the dish.

We decided on dessert wines with our dessert and the Sommelier recommended the Monbazillac, which hails from the South West of France. The wine was well chilled, sweet and viscous. Another good choice. You can also opt for a cheese course for an additional fee but we declined. 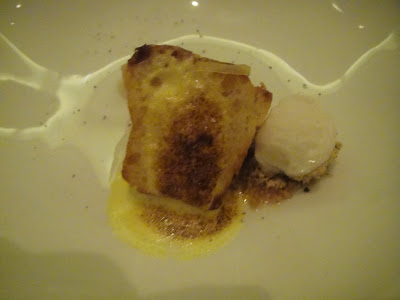 #6 Baba with quince, pear, grains of paradise sabayon
This was perhaps the most underwhelming dish of the night. The baba rum seemed a little stale and was a bit too sweet for my taste. In fact, I didn't even finish the plate which is a rare instance for me. 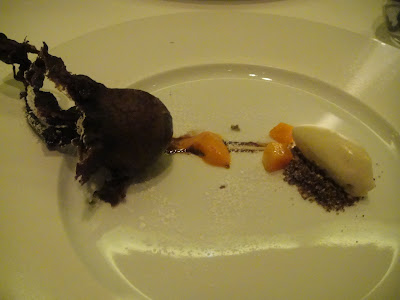 #7 Chocolate beignets, pumpkin confit, cinnamon ice cream
This dessert totally made up for the last, thank goodness! I loved the beignets especially the deep fried tip which crumbled in my mouth. When you broke the beignet, it oozed of warm chocolate. There was a granulated composite on the side of the dish which added some texture and it also included a bit of salt which I thought was rather interesting. I didn't really think the pumpkin added anything to the dessert; it seemed like it was merely a garnish which is kind of a pity because it could have been candied and made into a nice puree. 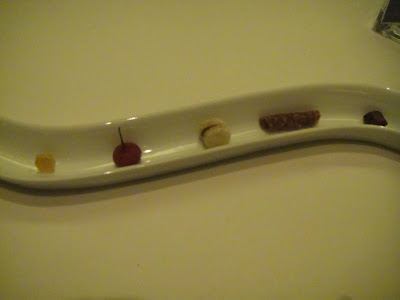 Like any fine dining establishment, we ended our dinner with mignardises.
Fennel gelee, raspberry marzipan, pink peppercorn macaron, hazelnut crisp, chocolate mousse
I liked the spiciness of the peppercorn macaroon which was surprising and lingered in your mouth for some time.

The 7 course tasting menu was outstanding. There were so many highlights such as the lobster risotto, the soup and the duck. The food was well executed and almost every dish had amazing flavors. The service was also first-rate. Although the restaurant is a fine-dining establishment, the service wasn't snooty. In fact, it was very welcoming. The hostess was hospitable, the charming and dashingly handsome manager was attentive, the waiters were friendly and presented each dish, and the Sommelier Mark Mendoza was spot on with his wine selections. The service was also brisk and there was barely a gap in between courses. In addition, 7 courses was just right. It did not leave us unsatisfied, nor did it leave us painfully uncomfortable as Ortolan's (12 course) Menu Plaisir or Sona's 9 course menu.

After seven years, Sona is still kick'in butt. There is less than two weeks before the Anniversary Menu ends so if you are looking for a reason to check out Sona, this is as good a time as any. You won't be disappointed.